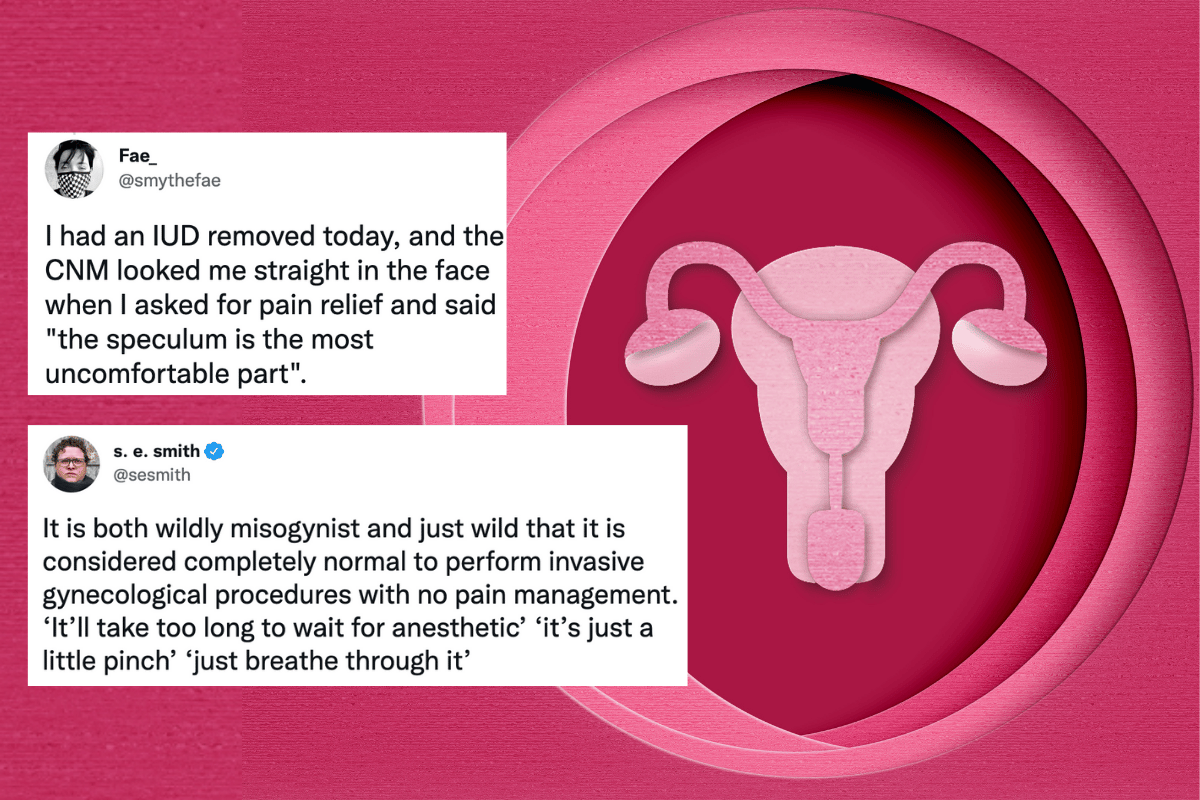 IUD insertions and removals, biopsies from the breast, skin and/or cervix, childbirth, Endometriosis and fertility-related treatments: these are just some examples of procedures women have had without pain medication.

The topic of pain relief when undertaking a medical procedure can be complex. Many women have reported feeling stigma from health professionals who suggest certain procedures don't warrant the need for meds (for some dinosaur-age reason).

Watch: Mia Freedman gets an IUD. Post continues below.

"We really want people to feel empowered to express any anxieties they might have and also to say stop."

It is both wildly misogynist and just wild that it is considered completely normal to perform invasive gynecological procedures with no pain management. ‘It’ll take too long to wait for anesthetic’ ‘it’s just a little pinch’ ‘just breathe through it’

So, to highlight this issue, 30 women have shared their stories with Mamamia on the medical procedures they’ve had without pain meds.

Read on to hear their stories.

30 women on the medical procedures they’ve had without pain meds.

“I got my Mirena replaced earlier this year and it was horrendous. First, I passed out. Then I woke up and vomited. If I had known how bad it was, I would have asked my partner to come with me. I was really shaken when I left the hospital.”

“I had a biopsy on my boob anaesthetic-free. I didn’t plan it that way: unfortunately, the anaesthetic didn’t work.”

“When giving birth, I got to 9cm dilated and was yelling for the drugs: but they wouldn’t give me any.”

“I had an IUD inserted as a form of emergency contraception when I was 16 (I had missed the window for the morning after pill, and was told this was a back-up solution). I was given no warning or explanation, and I fainted and threw up because of the insertion. The two nurses acted like it was the most normal thing in the world. I was by myself: I hadn’t told anyone I was going and it was horrible. Also, since it was an emergency contraception, it had to be removed a month later. Luckily, taking it out was painless.” 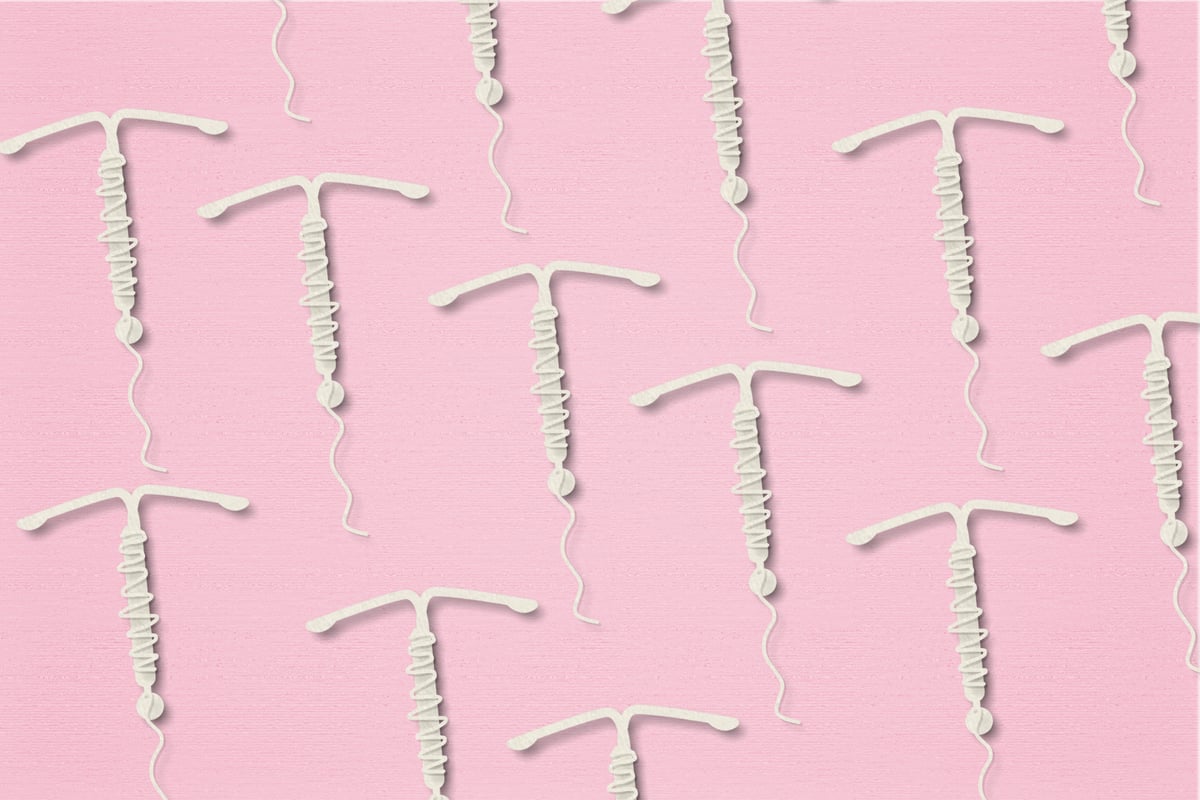 “I had two tooth fillings done without anaesthetic. Stupid me, I thought the needle in my gums would be worse than the drilling… and of course, it wasn’t. I hate the idea of being an inconvenience (social conditioning at its worst) so I sat there for the whole thing in pain rather than just speaking up and telling him I had changed my mind and wanted the numbing shot.”

“I’ve had my IUD removed and inserted without pain meds. I was really nervous and hoped I would go under for it, but it turned out to be okay. I remember the removal being worse than the insertion. Thankfully my doctor advised me to come with someone, so my boyfriend drove me there and back too."

“I had a sun cancer removed off my back. The doctor looked down at my tiny baby in the capsule at my feet and said, 'Oh you’ve just had a baby, this’ll be nothing.' It was in fact: not nothing."

“I had laser surgery on my cervix. I think there was a local anaesthetic, but I don’t remember it being very helpful.”

“I’ve had a colposcopy which is a small biopsy from the cervix. At the time, I had only been sexually active for about 6 months and was having issues with bleeding each time. I was also super sensitive, so it hurt so much. I then was in extreme pain for a week.” 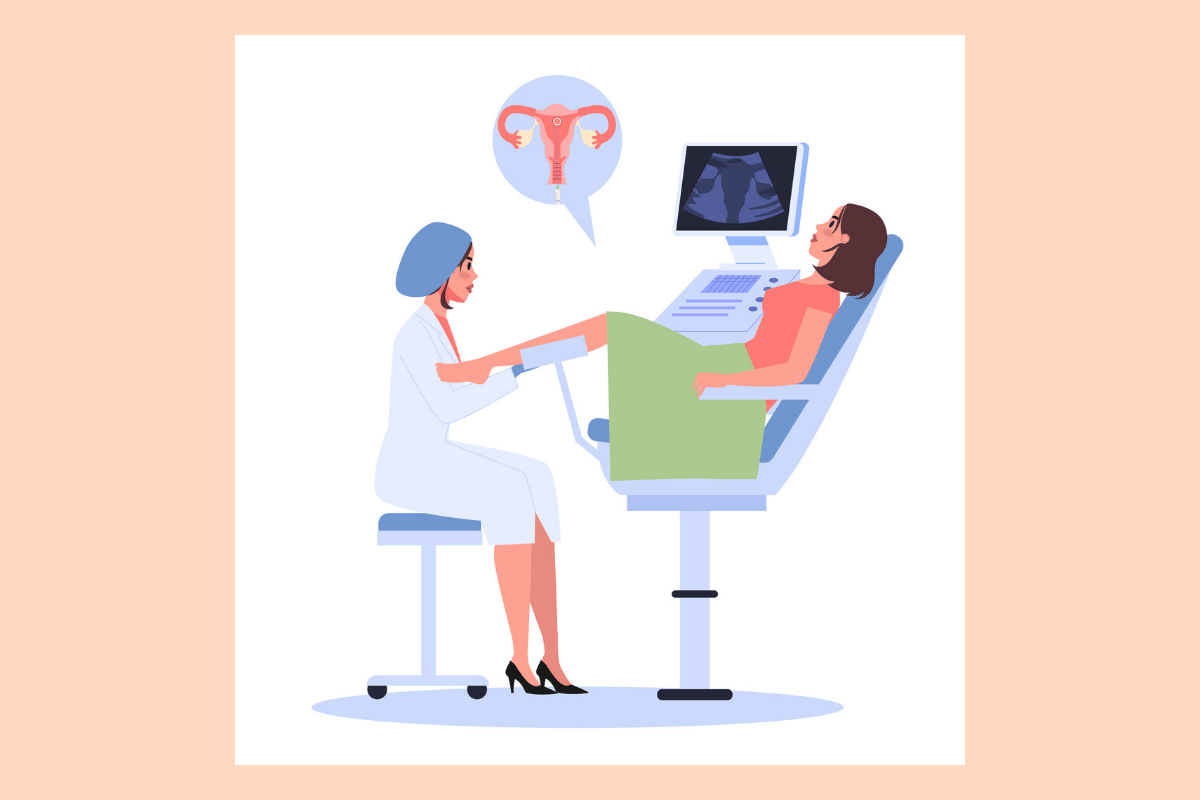 “I have multiple examples: the insertion of ear grommets, a biopsy of my cervix, an IUD removal, childbirth, getting holes put in my sinuses via the nostrils in the ENT’s room, and a manual breaking of my waters at 2cm dilated. The manual breaking of the waters was by far the worst!”

“I had my uterus scraped in an attempt to remove RPOC (retained products of conception) without anaesthetic. It didn’t work and still needed to have dilation and curettage.”

“I had a skin tag removed that was caused by the stitches I received when my son was born, so right between the vagina and perineum. The gyno at the hospital (of course a male) burnt it off with silver nitrate without so much as offering some Panadol for me. I’m surprised I didn’t rip holes in the arms of the chair.”

“The insertion of a Mirena in the gyno chair. I then went back to work straight after, stopping off on the way at the pharmacy for some pain killers and the corner shop for a caramel slice, as I was feeling rather tender!”

“A stretch and sweep. Ouch.”

“I had a laparoscopy/hysteroscopy to remove stage four endo that involved trying to separate my bowel and ovaries which had become fused together. It was honestly agony, and they sent me home with no pain relief.” 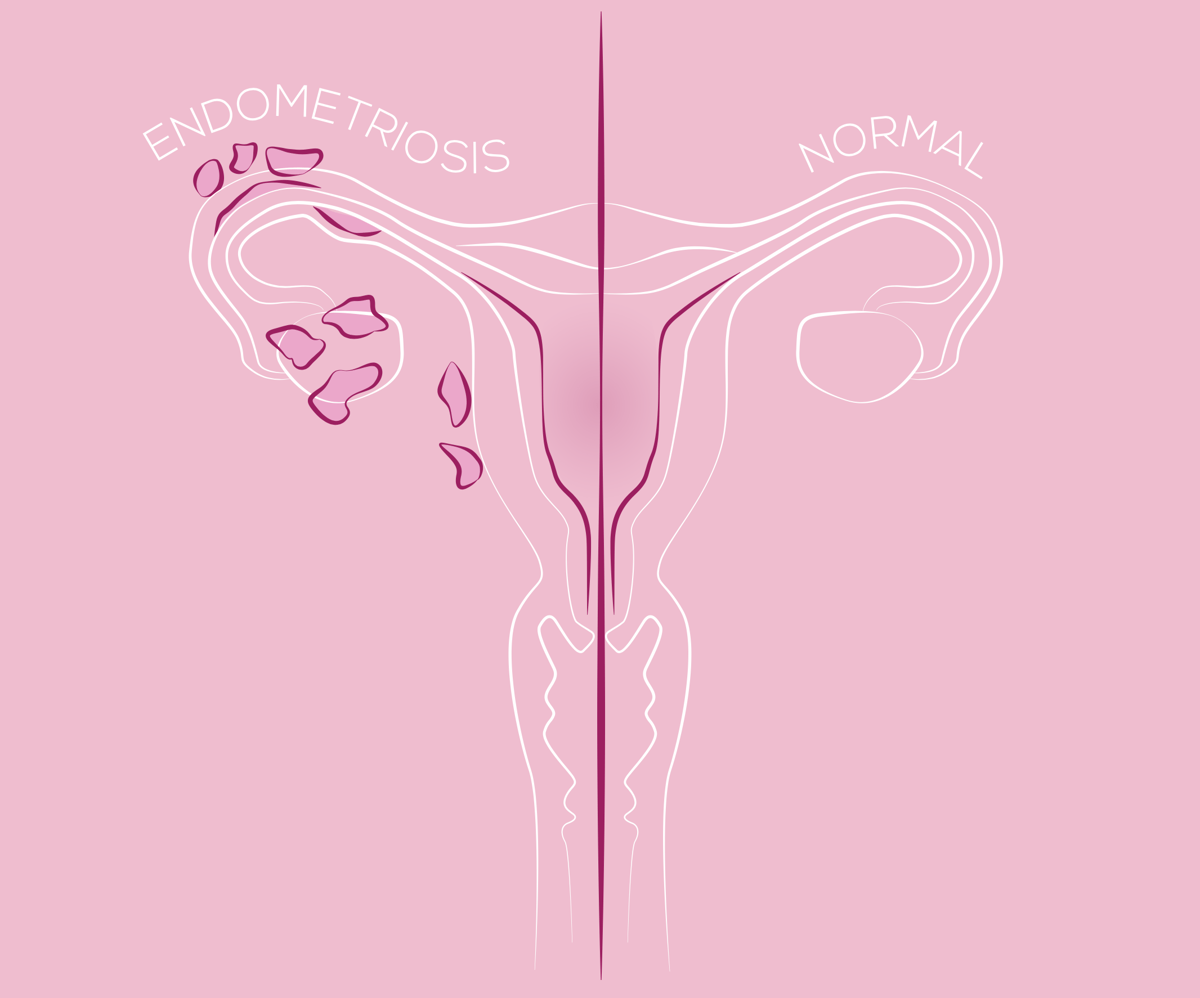 “I had a root canal once because the anaesthetic makes me too jittery. I meditated during the procedure. It did help, but not completely.”

“Six weeks after giving birth, I had a pap smear, and it was excruciating. I would have liked to have been warned about that one or given some pain relief. They normally don’t hurt for me, but probably something to do with the elevated estrogen from breastfeeding and the fact the still-healing stitches were in the way didn’t help."

“I’ve had a colposcopy during lockdown and so I couldn’t take my husband for support. I have a range of gynaecological conditions and so anything down there hurts... a lot. And the female doctor doing the procedure was really rough. It hurt like hell but I was told they never give people any kind of pain meds / anaesthesia for a colposcopy. They were extracting cells which left me bleeding and with horrendous cramping afterwards. It seems really unfair. If men had to go through that 100% they would be given pain relief. Women are just expected to put up with it, and now because of COVID, we aren’t even allowed moral support. Then they wonder why so many women put off pap smears.”

“A friend of mine had to have cells lasered off her cervix and she wasn’t given any pain relief!”

“I’ve given birth three times without pain relief. The last time was the worst and I thought I was going to die, quite honestly.” 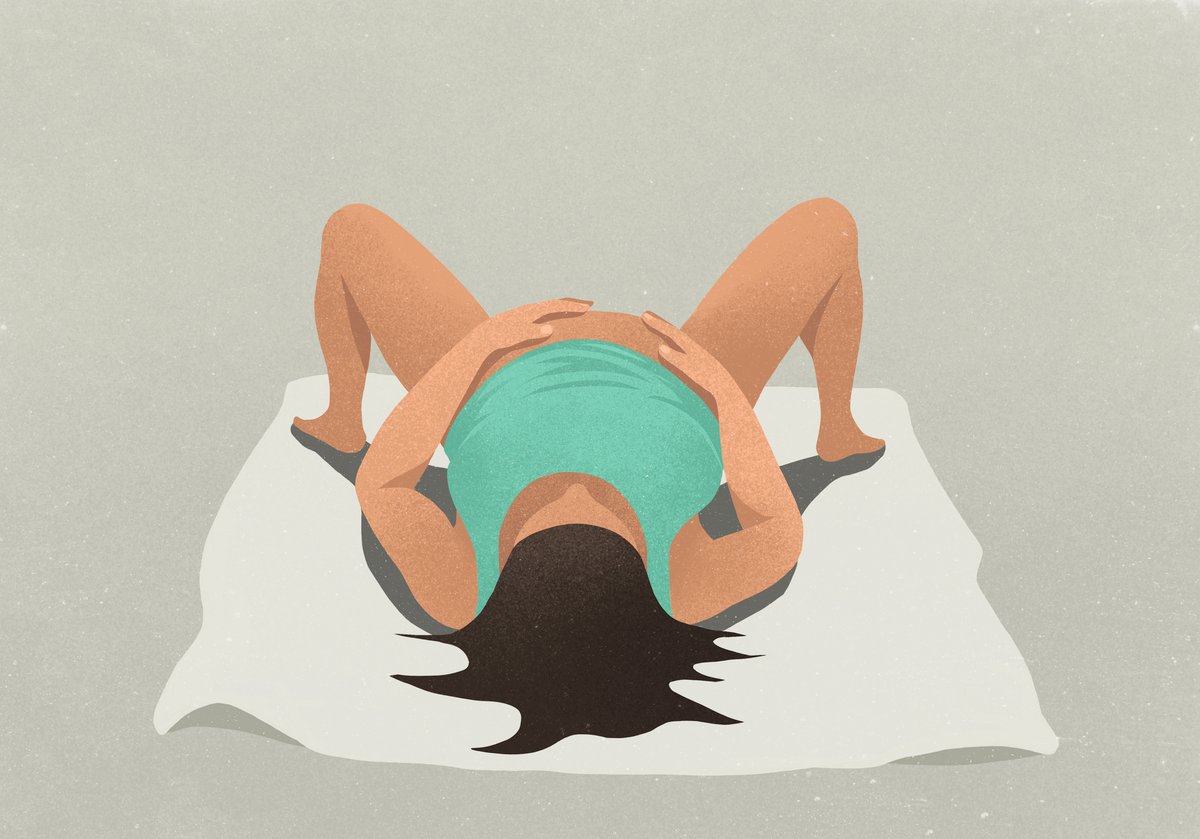 “I had a tubal flush pre-fertility treatment. They recommend taking pain relief beforehand and the doctor said just as she was about to start, ‘if it’s too uncomfortable, we can do it under general anaesthetic.’ The insertion of the balloon catheter took my breath away and they had to recline the chair because I went so pale, they thought I might pass out. I pushed through because I didn’t want to pay for the GA.”

“I endured years of painful periods that would put me in bed for days. I refused to have my Mirena inserted in a doctor’s room, because I thought it sounds barbaric. I had it inserted while having a laparoscopy and excision and ablation of endo. The endo was extensive and I had so much removed that they did give me drugs while in hospital overnight, but nothing for when I went home.”

Listen to Mamamia's news podcast, The Quicky on what you need to know about endometriosis. Post continues after audio.

“My emergency c-section had an inefficient spinal block. 30 minutes in I felt the pain and it took days for me to not feel the immense pain anymore. I vomited on the operating table. My husband was told I would be out of recovery in an hour, but by the three-hour mark he thought I had died and he was alone with a newborn.”

“I’ve had a gastroscopy and intestinal biopsy without pain meds. It is supposed to be done under general. They didn’t tell me beforehand that unless I had someone to pick me up and stay with overnight, they wouldn’t put me under. I had just driven 12 hours for the procedure so I definitely wasn’t turning around and driving home. Wouldn’t recommend.”

“I had a Mirena inserted in an OB’s room. It hurt a lot and I fainted immediately afterwards. I found out five weeks later that it was pushed through my cervix and into my abdominal cavity. Had to have a laparoscopy to remove it. No more IUDs for me!”

“I had a punch biopsy of skin cancer on my chest just above my right breast. The local anaesthetic didn’t work and I felt the excruciating pain of a piece of flesh being punched out of my chest.” 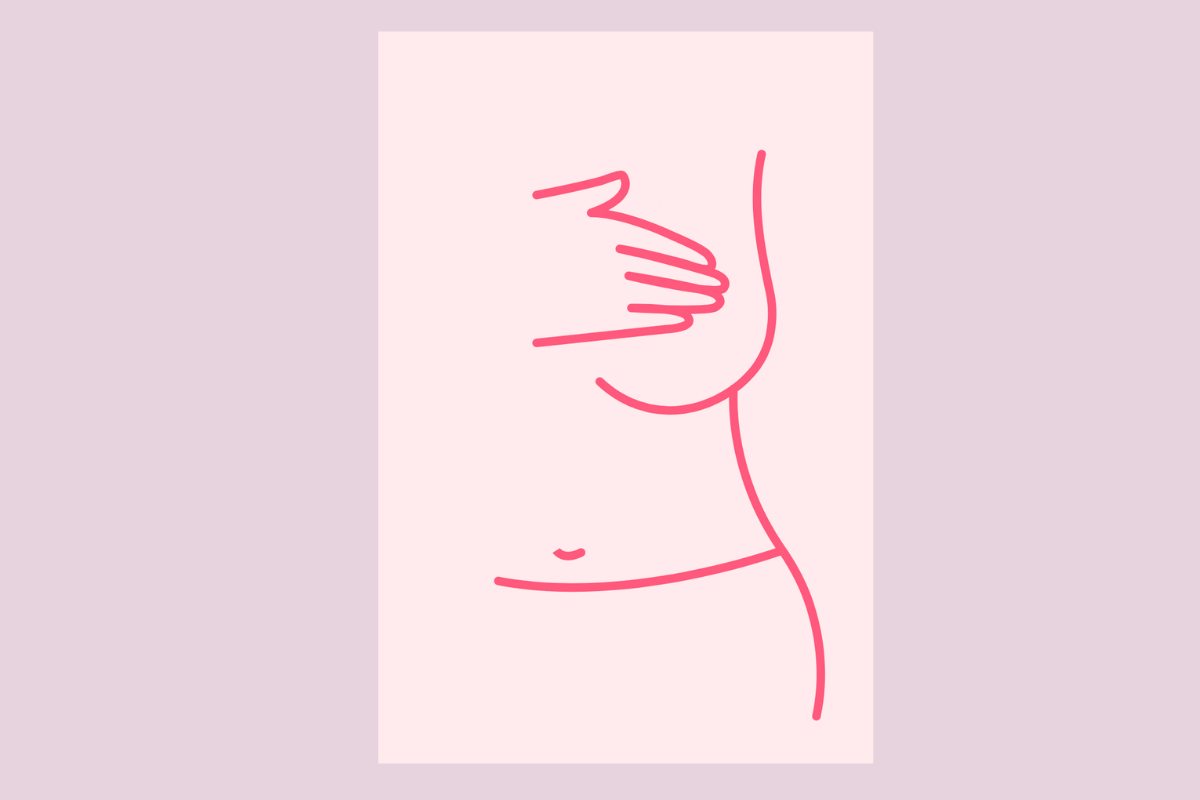 “I had a heart procedure where they gave me a local in my bikini line, and then inserted the wire that travelled up to my heart. The cardiologist kept asking if I wanted pain meds but I declined. I was so relaxed and I fell asleep. That’s what having a ten-month-old that doesn’t sleep will do to you: I can rest anywhere.”

“I gave birth with no pain relief twice and not through choice. I went from 4cm to 10cm dilated pretty quickly and was pushing in 30 minutes with my son. So, no time for pain relief.”

“My highlight would be my failed IUD insertion attempt. Just under an hour of holding my legs in a frog-like position, my doctor unsuccessfully attempted to navigate through my cervix in order to reach my retroverted uterus. But the doctor kept getting stuck at a tilting point. It was painful and traumatic. When I got back to my car, I burst into tears. Fortunately, the following week when we tried again there had been enough of a shift of position that the process was successful within minutes.”

Reply
Upvote
I had my IUD removed without anaesthetic and another inserted. Removal was a sharp pain that quickly subsided and I didn't feel like I should have had pain relief. My friend had the same procedure and said it was excruciating. Guess we are all different (and some gynos are better than others too!).
M
mamamia-user-405278599 3 months ago