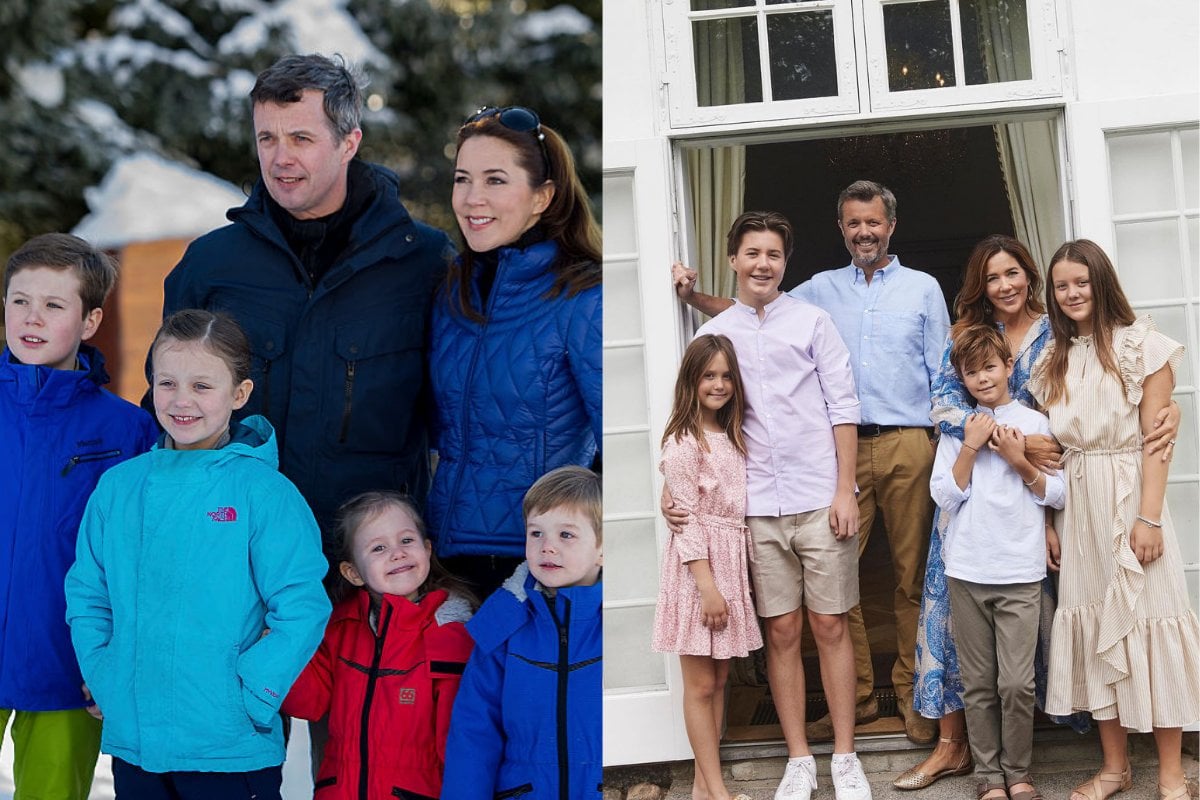 On September 16, 2000, 28-year-old Mary Donaldson went for dinner at Sydney restaurant and bar, Slip Inn. At the time, she was working for the real estate company Belle Property as a sales director and attended the venue with her roommate and a friend.

That same night, 32-year-old Prince Frederik attended that same bar with various royal friends, as they were visiting Australia for the 2000 Sydney Olympics.

They met up with Prince Felipe of Spain, who knew the sister of Mary's roommate. Prince Frederik introduced himself to Mary as "Fred".

"The first time we met, we shook hands," the now Princess told Jens Andersen, the author of Prince Frederik's authorised autobiography, Under The Bar. "I didn’t know he was the Prince of Denmark. Half an hour later, someone came up to me and said, 'Do you know who these people are?'"

When Andrew Denton asked Mary about their first encounter in 2005, she said, "I gave Frederik my telephone number and he rang me the next day, so you could say something clicked. It wasn't the fireworks in the sky or anything like that but there was a sense of excitement."

Soon after, Mary and Frederik started a long-distance relationship. There were many phone calls, letters and low-key catch-ups out of the public eye.

But on November 15, 2001, the Danish magazine Billed Bladet revealed Mary as Frederik's girlfriend and a month later, she moved from Sydney to Copenhagen. She started working at Microsoft and learning the language.

It was quite the adjustment.

"I did experience a feeling of loneliness – short-term – when I first moved to Denmark," she told the Australian Women’s Weekly.

"Moving to Denmark was a huge change in my life – a new culture, new language, new friends, and another way of life," she added.

"So, I see it as quite natural that at times I felt quite alone or a little bit like I was on the outside looking in."

Mary also explained that seeing Prince Frederik in his natural royal habitat was very different too.

"I got to know you in shorts and T-shirt, and I remember very clearly the first time you changed from casual to gala," Mary shared in a speech at Frederik’s 50th birthday on May 26, 2018.

"It was during my first visit to Denmark where we had celebrated our first New Year’s together. I was sitting in the couch in your living room when you said that you should get ready for dinner, a dinner that is always held on the first of January. At that time, I really didn’t know so much about that part of your world. So, I didn’t give it much thought," she recalled.

"You left the room, as the man I knew, and came back in full gala uniform. It was suddenly a very different image of you that was new to me. Deeply impressive and daunting at the same time. But your eyes and your smile were the same. Gala or not."

On October 8, 2003, the couple announced their engagement. Frederik proposed to Mary with a ring that featured a large emerald-cut diamond with two emerald-cut rubies on either side – a nod to the Danish flag. 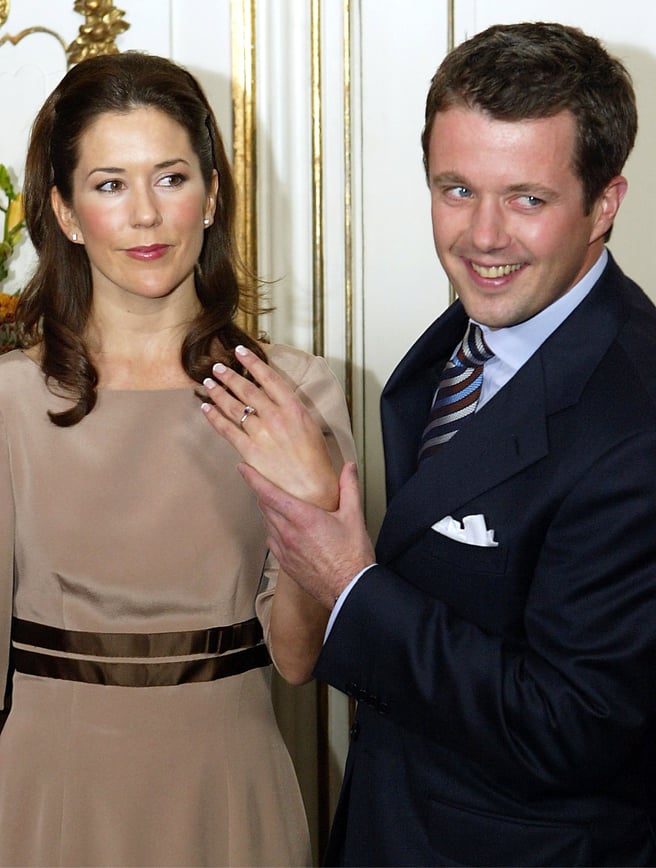 The following year, on May 14, 2004, Prince Frederik and Mary Donaldson wed at the Copenhagen Cathedral. 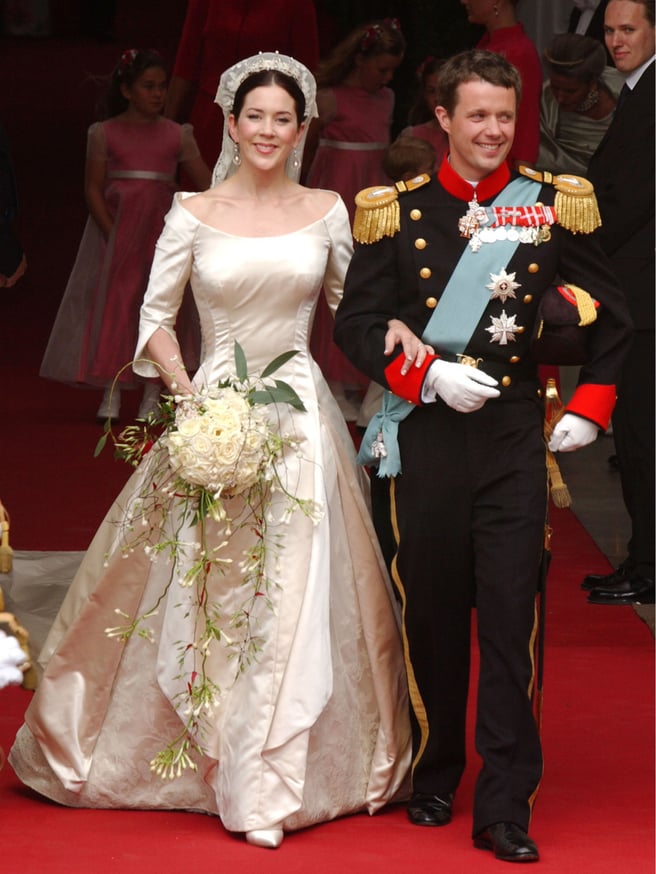 Mary's bridesmaids were her two sisters, Jane Stephens and Patricia Bailey, as well as her friend Amber Petty, while Prince Frederik's brother Prince Joachim was his best man.

Mary wore a simple ivory dress created by the Danish fashion designer Uffe Frank and her bouquet paid tribute to Australia, incorporating eucalyptus that was flown in especially for the occasion.

When they married, she was pronounced her Royal Highness The Crown Princess of Denmark. And when Frederik eventually becomes king, she'll become the Queen Consort of Denmark.

After the wedding, the newlyweds honeymooned in Africa.

"She didn’t know where we were going, and I wanted to go some place where we could be ourselves, literally, just the two of us. And we had to go to the African continent, in my opinion, to get that, or you have to go to Antarctica or Greenland," Prince Frederik told Andrew Denton when appearing on ABC's Enough Rope.

"We were completely Mary and Frederik," Princess Mary said on the show.

"We just did as we pleased, went around as we pleased. I mean just to sit and watch the animals as the dawn's setting. It was just such a magical experience." 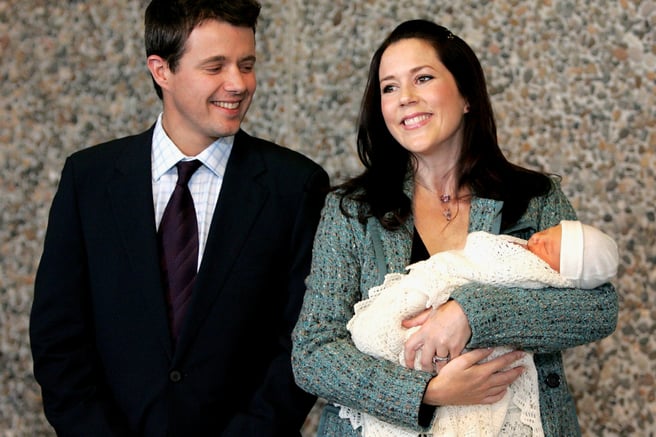 Less than two years later on April 21, 2007, their daughter Isabella was born. 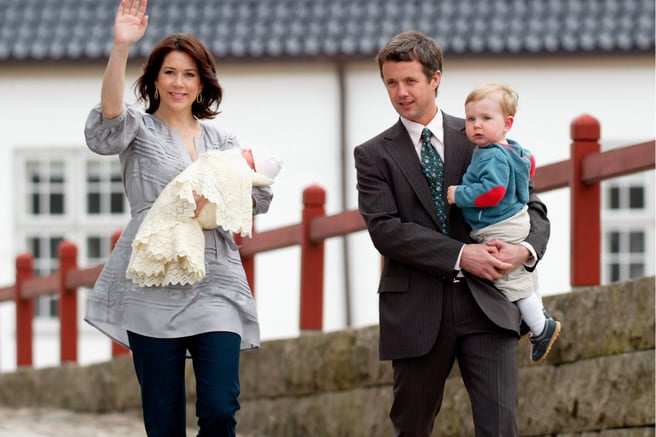 "The last 10 years was a rewarding and difficult journey," she told the Australian Women's Weekly. "We worked hard with specialists and partners who established The Mary Foundation. Our efforts aimed to make lives of people better and to give a sense of hope to them for the future."

In January 2011, the couple welcomed twins Vincent and Josephine. 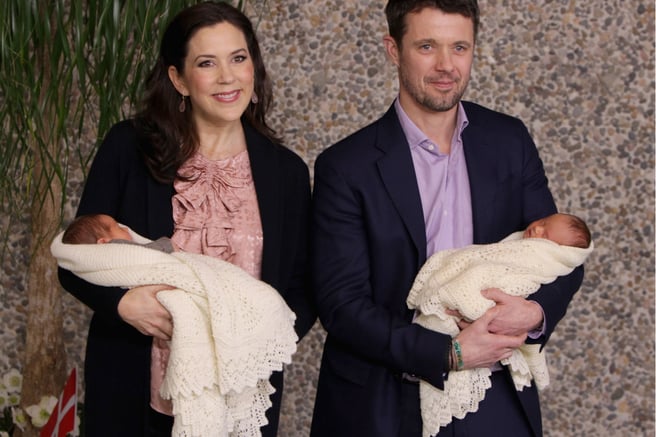 "Finding the right woman and getting married and having the children that I have now, it was something I could only dream of back then. For that dream to come true is what I appreciate the very most," Prince Frederik told New Idea in 2018.

When speaking about the family they have created, the Prince spoke very proudly of his wife.

"The crown princess wants to do better all the time. I’m very proud of that attitude, and her achievements in general," he said.

But despite those vastly different backgrounds, they share the same ideas on how to raise their four children.

"The crown princess and I fully agree on what’s in store for the children, both now and in the future," he said.

And 20 years on, Princess Mary and Prince Frederik sound as happy as ever.

"I am so happy that you swept me off my feet and that we dared to fall for each not just for a moment but for life," she said at Prince Frederik's 50th birthday in 2018. "Life with you is never boring."

"You invited me into your world and the world of the Danes, after we had only known each other for a short time. And there were, indeed, many unsure steps when we started our common journey, side by side and separated at one and the same time," she said.

"It takes courage to dare, but without daring, we lose what could have been." 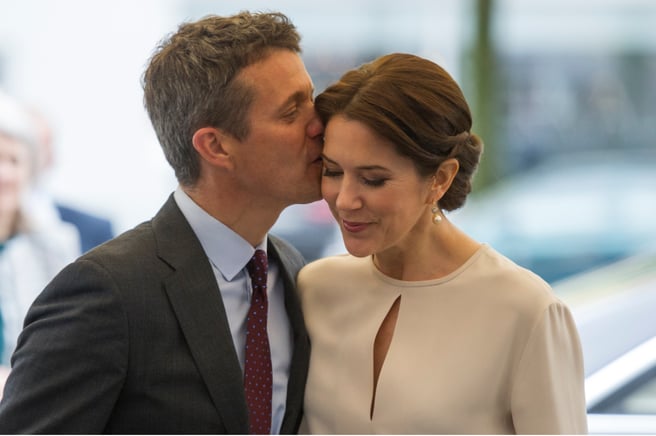 When she mentioned that her favourite moments were those spent with their family, Prince Frederik was brought to tears.

“For me, it is in our family moments that I feel most grateful, most united, most in love,” she shared.

In December, Prince Christian - the second heir to the Danish throne - was diagnosed with COVID-19 after contracting it at school.

The entire family went into isolation at home in Copenhagen.

"Apart from the Crown Prince's family, Prince Christian has not been in contact with other members of the royal family in recent times," the Palace said in a statement.

In January of this year, Princess Mary and Prince Frederik moved from the Amalienborg Palace in Copenhagen to the ski resort town of Verbier for the winter months. They enrolled their four children into an international school over there.

However, due to the global pandemic, the family of six had to return to Denmark. The children have since returned to their normal school.

"Her Royal Highness Princess Isabella has a birthday and turns 14 today," the post said.

"For the Crown Prince and Crown Princess, it is a great pleasure to mark the day with three new photos of the Princess, which was taken in the spring sun at the Chancellery.

The images were taken by her mum, Princess Mary, at Chancellery House - the summer home the family recently relocated to as it's a tradition for the family to stay there during the warmer months.

Reply
Upvote
This one is such a lovely love story.
R
rush a year ago