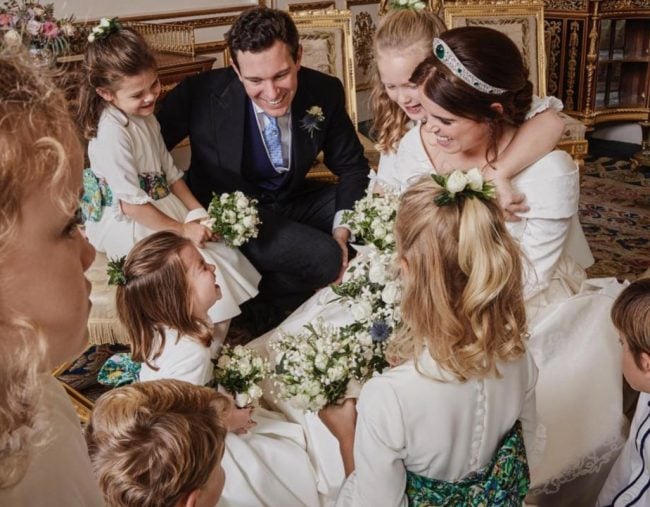 Princess Eugenie has shared an intimate behind-the-scenes picture from her wedding – and oh my gosh, Princess Charlotte is the cutest.

Eugenie shared the photo of her and groom Jack Brooksbank with their young bridesmaids and pageboys on her Instagram page, thanking those who were involved in the wedding and everyone for the wonderful wishes they have received.

Three-year-old Princess Charlotte is sitting in front of Eugenie in the photo and is laughing so hard her eyes are squeezed shut. The others in the photo, including Eugenie, Jack and bridesmaids Savannah Phillips, 7, and Robbie Williams’ daughter Teddy, 6, are also laughing.

Official wedding photographer Alex Bramall also shared two beautiful black and white photos of Eugenie on Instagram along with the caption: “This is where it all started”.

Mother-of-the-bride Sarah Ferguson shared photos from the wedding on Twitter and Instagram earlier this week, just minutes after Kensington Palace confirmed Prince Harry and Meghan Markle were expecting a baby.

While the world found out about the royal baby on Monday, the couple supposedly told the royal family of Meghan’s pregnancy during Princess Eugenie’s wedding celebrations on Friday, The Sun reports.

Eugenie’s proud father, Prince Andrew, also made no mention of the royal baby news on Twitter, instead tweeting a “happy birthday” message to his ex-wife and retweeting her message of love to his daughter and Jack.

The royals had previously released four official photos from Eugenie’s big day, including a group photograph taken in the White Drawing Room at Windsor which showed both the bride and groom’s families.

It signified the first time Sarah the Duchess of York, who divorced Prince Andrew the Duke of York 22 years, had been pictured with the Queen in decades.

Royal watchers were also surprised 97-year-old Prince Philip, who was widely reported to hold resentment towards Sarah Ferguson, was not only photographed with her, but pictured sitting beside her.