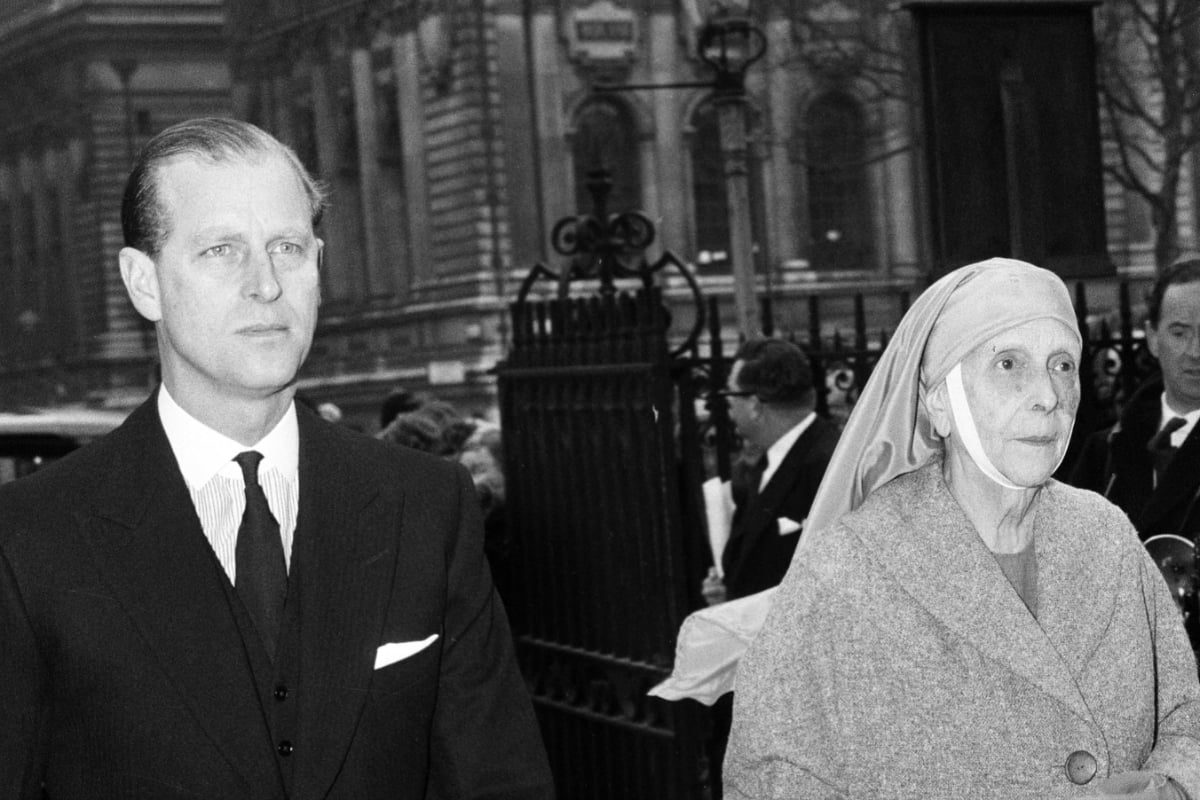 At the 1953 coronation of Queen Elizabeth II, an unassuming figure sat among members of the royal family. Dressed in a simple, two-tone grey dress, a nun-like veil on her head, Princess Alice of Battenberg was in stark contrast to the pomp and ceremony unfolding around her.

Despite being the mother of Prince Philip, Duke of Edinburgh, and mother-in-law of the newly crowned sovereign, little was known or spoken about her; she was, then, an enigma within an already closed-door family.

Watch: Princess Alice is one of the royals featured in the current season of The Crown.

Yet as is touched on in the popular Netflix series, The Crown, Princess Alice’s life was among the most extraordinary of them all.

Born in a castle, married to a prince. Then forced to flee (twice).

The great-granddaughter of Queen Victoria, Princess Alice was born at Windsor Castle on February 25, 1885, to parents Prince Louis of Battenberg and Princess Victoria of Hesse and by Rhine.

She was congenitally deaf from birth but learned to read lips, reportedly in multiple languages. Her niece, Countess Mountbatten, told the documentary The Queen’s Mother in Law that Princess Alice was raised to cope with her disability on her own, forced to find ways to overcome it.

“[Princess Victoria] said to the family, ‘Look, if Alice doesn’t hear and doesn’t understand what was said, it’s quite important not to repeat it so that she learns to stand on her own feet,'” the Countess said.

In 1903, Princess Alice married Prince Andrew of Greece, and together they had four daughters followed by a son, Philip.

But as war descended on Europe a decade later, the family became entwined in political turmoil that strangled Greece. In 1917 Prince Andrew's brother, King Constantine I, abdicated the throne amid a dispute over whether the nation should enter the conflict, forcing the entire family to flee in exile.

Though they returned two years later, their reprieve was short-lived. Prince Andrew was arrested during the 1922 revolution but fled Greece again with Princess Alice and his children (including 1-year-old Philip) to seek safety in Paris.

The years of upheaval took their toll on the Princess. She sought solace in religion and converted to the Greek Orthodox church. But soon afterwards, she began making claims that she was receiving divine messages and had healing powers.

After suffering what was referred to as a 'nervous breakdown' in 1930, Princess Alice was diagnosed with paranoid schizophrenia and was committed, against her will, to a Swiss sanitarium.

On the day she was removed from her home, Prince Philip, then just nine years old, was taken for a picnic by his grandmother. By the time he returned, Princess Alice was gone: "It was literally a car and men in white coats, coming to take her away," the Princess' biographer, Hugo Vickers, said.

The young Prince didn't see his mother again until he was 16.

During her time in the institution, Princess Alice was subjected to a host of (often barbaric) experimental treatments, some at the direction of the Austrian neurologist and renowned psychotherapist, Sigmund Freud.

It was concluded, for example, that the royal had sublimated her unrequited love for a man with Jesus Christ, and so doctors targeted her ovaries with radiation in an attempt to quell her libido. (Or "cool her down", as the facility's records reportedly put it.)

After her release, she spent much of the decade living an isolated existence in central Europe, estranged from her husband and children. She was reunited with them at the funeral of her youngest daughter Cecile, who died in a plane crash in 1937.

Though she remained in contact with them, she then moved to Athens to work with the poor. Again, alone. By the time Athens was liberated in 1944, she was living off little but bread and butter.

She concealed a Jewish family during WWII.

During her time in Greece during the war, Princess Alice sheltered a Jewish family at great personal risk.

From late 1943, the wife and two children of Haimaki Cohen, a late Jewish member of Greek Parliament and friend of Princess Alice's, lived in two rooms on the upper floor of her Athens home.

According to Lyn Smith, author of Heroes of the Holocaust: Ordinary Britons Who Risked Their Lives, Princess Alice's modest staff were told Rachel Cohen was a former governess to her children. And when the Gestapo came calling, the Princess "used her deafness to advantage, pretending not to understand their questions or what they were talking about. It worked and they soon gave up".

Rachel, her daughter, Tilde, and son, Michel, all survived the war.

In 1993, Princess Alice was posthumously given the "Righteous Gentile" award by Israel Holocaust memorial institution, Yad Vashem, for her efforts to keep the Cohens safe. According to The New York Times, Prince Philip said at the time, "I suspect that it never occurred to her that her action was in any way special. She was a person with a deep religious faith, and she would have considered it to be a perfectly natural human reaction to fellow beings in distress."

In 1947, Princess Alice briefly returned to Britain for her son's wedding to Princess Elizabeth, heir to the British throne. Her daughters — Prince Philip's siblings — were snubbed from the event, due to their husbands' ties to or involvement in the Nazi party. (Sophie, for example, had wed Prince Christophe of Hesse who became a senior member of the Nazi SS. She even named their eldest son Karl Adolf in honour of the dictator.)

Two years later, Princess Alice started a religious order called the Christian Sisterhood of Martha and Mary, dedicated to caring for the sick. Around that time, she began wearing the simple, grey habit of Greek orthodox nuns, despite never being ordained into the church.

Bemused by her daughter's decision, Alice's mother Princess Victoria famously said, "What can you say of a nun who smokes and plays canasta?"

Princess Alice lived a simple life for the next decade, focused on charity and community work. In the late 1960s, her health deteriorating, Prince Philip and Queen Elizabeth II invited her to live with them permanently at Buckingham Palace.

(Despite what is shown in The Crown, she never gave an interview to the Guardian. That was fiction.)

Her remains were initially interred in the Royal Crypt at St George's Chapel, Windsor. But they were later moved to be near her aunt Princess Elisabeth (a Russian orthodox saint) at the Church of St. Mary Magdalene on the Mount of Olives, Jerusalem, in accordance with her final wishes.

More, behind The Crown: A ‘dark glistening wave’ and 116 children buried alive: The true story of The Crown’s Aberfan disaster.

I quite like the idea of a nun who smokes and plays canasta. She sounds like she had a very tough life, I hope her charity work in later life made her happy.