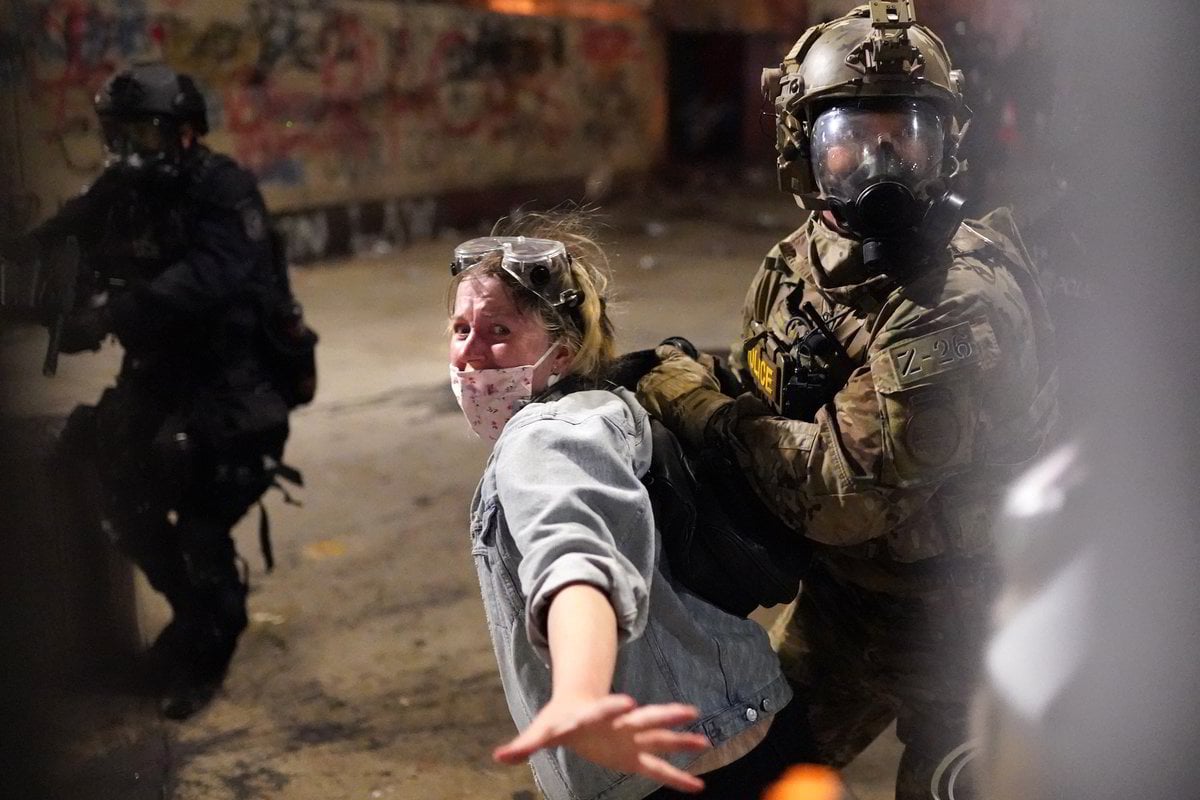 For every night since May 29, protestors in Portland, Oregon, have held demonstrations in light of the Black Lives Matter movement.

It's been two months since George Floyd's death sparked worldwide protests against systemic racism and police brutality, and whilst they have since subsided in many cities, Portland hasn't stopped. In fact, the protests in Portland have recently intensified.

Here's everything you need to know about the persistent unrest in Portland, Oregon.

What is happening in Portland?

Up until recently, mostly peaceful protests have swept the streets of Portland for about eight weeks, as residents demanded racial equality. The city is known for their brutal racist history and for being one of America's whitest cities, making the town a particularly poignant backdrop for the movement.

By June, the protests had largely dwindled. Nightly marches continued, but were attracting fewer numbers.

Nevertheless, federal forces were deployed in early July at the behest of President Donald Trump, who said damage to federal property, including the federal courthouse in Portland, left him with little choice. Their arrival was unwelcome - not just by protestors, but by local authorities as well. This outrage reinvigorated the rallies. 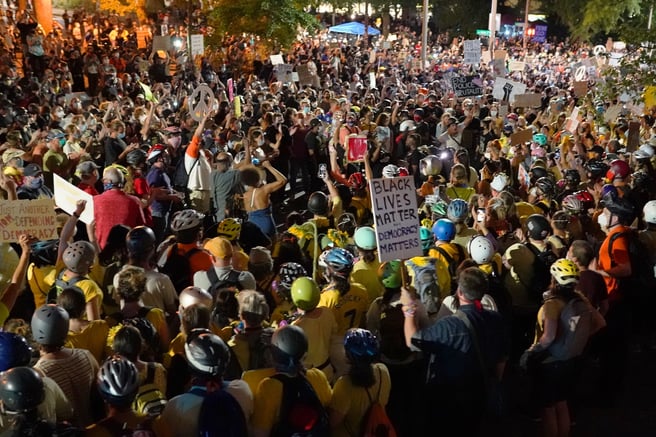 A crowd of about a thousand people protest in Portland, Oregon. Image: Getty.

Portland Mayor Ted Wheeler, of the Democrat Party, said the "dozens if not hundreds of federal troops" were "sharply escalating the situation".

Donald Trump, on the other hand, insists it is the right thing to do.

Speaking at the White House, Trump said, "Portland was totally out of control, and they went in, and I guess we have many people right now in jail and we very much quelled it, and if it starts again, we'll quell it again very easily. It's not hard to do, if you know what you're doing."

We are trying to help Portland, not hurt it. Their leadership has, for months, lost control of the anarchists and agitators. They are missing in action. We must protect Federal property, AND OUR PEOPLE. These were not merely protesters, these are the real deal!

According to The New York Times, what started out as protests against racism have now morphed into more complex goals, including "defunding the police, addressing income inequality and pushing federal agents out of the city."

As the protests have escalated in the wake of the presence of federal police, some protestors have become increasingly violent, whilst others have remained peaceful.

Who are the federal police?

A number of videos widely circulated online have raised concern and questions about who exactly the 'federal police' are. The troops are dressed in camouflaged combat-style uniforms and have been seen arresting people on the streets, before puting them in unmarked vehicles.

In fact, Senior Democrat Nancy Pelosi said they were "unidentified Stormtroopers" who were "kidnapping protesters".

These are not the actions of a democratic republic.@DHSgov’s actions in Portland undermine its mission.

Trump & his stormtroopers must be stopped.

This is happening on the streets of our hometown of Portland, OR.

We will continue to resist. They are fucking with the wrong city 👊#TheResistance

The armed forces are part of a new federal initiative and were formed last month thanks to an executive order by Trump, who tasked them with the responsibility of protecting historic monuments, statues, memorials and federal facitlities.

Since they've arrived, the federal officers have employed the use of tear gas, which despite its widespread use is a banned substance per the 1993 International Chemical Weapons Convention.

What happened to the Portland mayor? 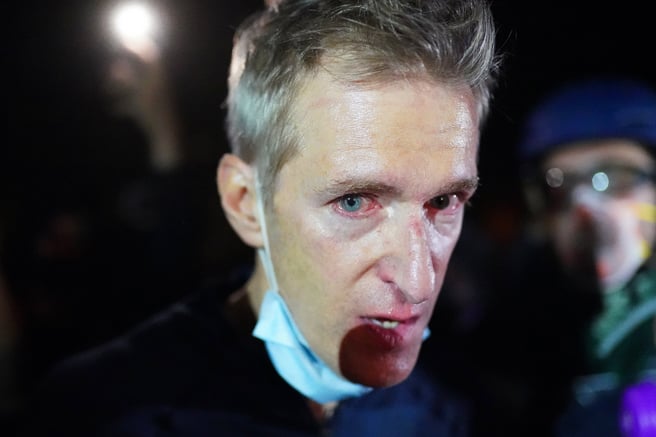 Portland Mayor Ted Wheeler reacts after being exposed to tear gas fired by federal officers while attending a protest against police brutality and racial injustice on July 22. Image: Getty.

Shortly after, Wheeler was tear gassed by federal police officers whilst in the middle of a crowd.

"I’m not going to lie. It stings. It’s hard to breathe and I can tell you with 100 per cent honesty I saw nothing that provoked this response," Wheeler told Time magazine.

"This is flat-out urban warfare and it’s being brought on the people of this country by the President of the United States and it’s got to stop now," Wheeler said. "This is a threat to our democracy."

The US Justice Department said on Thursday it would investigate the use of force by federal agents in Portland.

Who is "Naked Athena"?

Photos and videos have gone viral online of a naked woman placing herself between the protestors and police, before peacefully and silently sitting down.

The woman has still not been identified, but has been called 'Naked Athena' online. Witnesses are still unsure what her purpose was, but presumably she was in solidarity with the protestors and their movement.

She was reportedly shot at by police, despite showing no violent behaviour.

After a delay spent trying to figure out my new gas mask I am downtown bound once more this eve. DMs are open so if you see something of interest please don’t hesitate to reach out. I’m particularly interested in fed behavior. Stay smart and stay safe out there.

A cropped version of this photo I shot on Friday is getting a lot of attention; I don't mind the crop but I do prefer the full version, so I'm putting it here pic.twitter.com/iraXCqYYP2

Who are the "Wall of Mums"?

In recent days, groups of mothers have come together, arm in arm, and placed themselves between federal officers and younger protesters to protect them. They all wear yellow, and have been heard chanting: "Feds stay clear. Mums are here."

The mothers' Facebook group, that has nearly 20,000 people, says they are "dedicated to supporting the current civil rights movement to end police brutality by protecting and supporting BLM protesters on the front line and online."

Now, the stand off between the Portland people and the federal agents continues, with no imminent end in sight, as neither side seems close to stepping down.

Reply
Upvote
Federal agents are literally kidnapping citizens yet the Trump sycophants whinge that’s wearing masks is an infringement of their ‘rights’. Even Margaret Atwood couldn’t have dreamt this up.
B
birdie 2 years ago

Reply
Upvote
1 upvotes
How dare the president of the United States expect that people will behave in a respectful, responsible manner? When did it become okay to loot and burn other people’s property for any reason? What’s it to them if there are soldiers on every corner? Protesters need to be reminded that if they want the benefits of living in a civilised democracy, they behave like civilised humans with consideration for others.
Stop making excuses for civil disobedience. Regardless of who the president is, it’s still illegal.
G
guest2 2 years ago

Reply
Upvote
@birdie  Many of those agents are from Homeland Security - none are military troops. However, Homeland Security was set up post 9/11 to deal with foreign terrorism on US soil and not as a militia to be used against American citizens.  Their deployment has done little to quell the situation, but has only served to embolden the protestors, although the Mayor still insists the protests have been largely peaceful.
C
cat 2 years ago

Reply
Upvote
1 upvotes
@birdie Trump has never behaved respectfully or responsibly so it’s a bit rich for him to expect anyone else to.
And ‘when is it okay to damage people’s property?’ - Are you saying that if China sent troops to invade the US then it would be fine to have officers on every street and you wouldn’t feel justified in fighting back? Trump sent troops into a city against the wishes of the mayor and the governor, he invaded, and now he wants to act like the victim. He is the aggressor here, how is anyone surprised that people didn’t meekly roll over in a country where people are encouraged to own a gun and ‘stand their ground’.
News
General
Opinion
True Crime
Politics
Sport
Explainer
Entertainment
Celebrity
Reality TV
Movies
TV
Books
Rogue
Royal
Lifestyle
Beauty
Fashion
Weddings
Home
Wellness
Health
Fitness
Travel
Food
Parents
Before The Bump
Pregnancy
Baby
Kids
Teens
School
Parent Opinion
Work & Money
Money
Finance
Career
Lady Startup
Relationships
Sex
Dating
Separation
Friendship
Family
Real Life
Couples