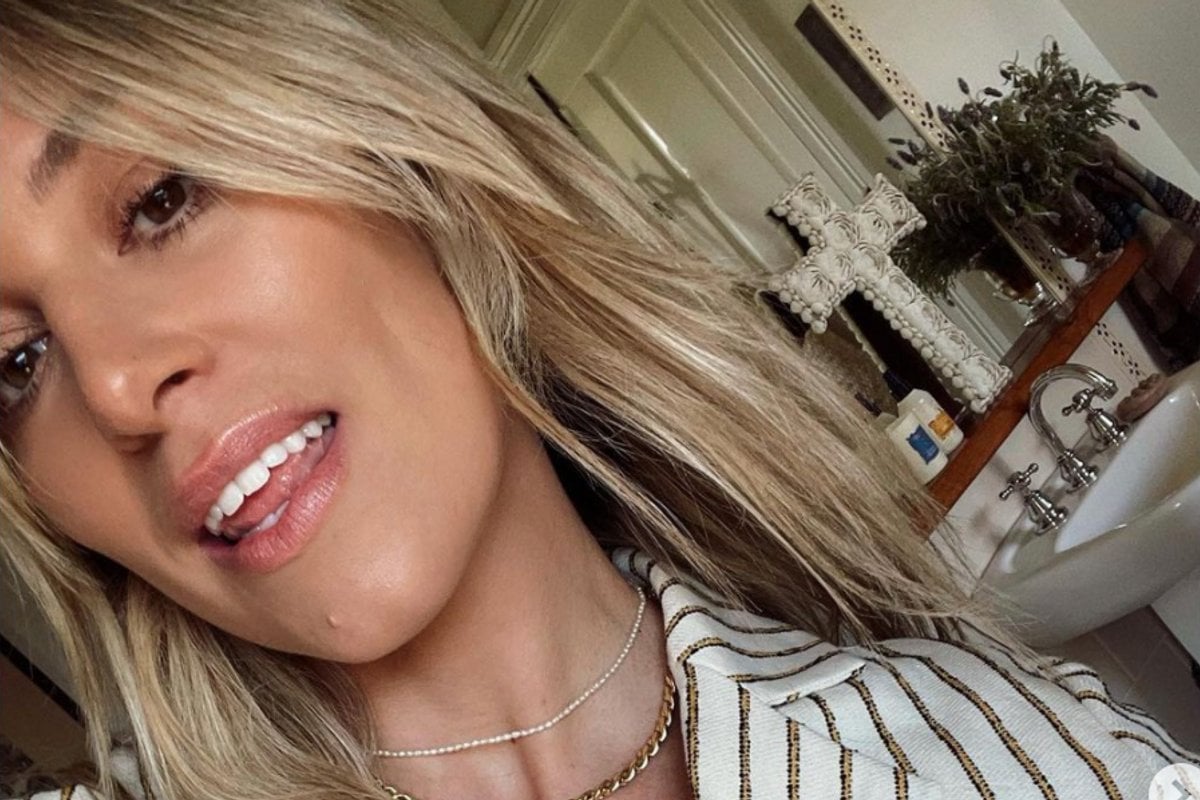 Over the next few weeks, perhaps months, you will notice something happening.

There will be a series of "leaks" about a woman named Phoebe Burgess.

These leaks will lead you to believe she is a liar. Self-interested. A hypocrite. An unreliable witness. A woman scorned. A 'fame whore'. People will criticise her for airing her family’s "dirty laundry" and suggest she move on. They will call her other names too.

Many will insist ‘there are two sides to every story’. And to an extent, that's true.

But her side will be drowned out, silenced by the loudness of his.

That’s how this works. She even warned us, less than five days ago.

In a feature published by Weekend Australian Magazine over the weekend, journalists Claire Harvey and Jessica Halloran write that when a star NRL player is in trouble, "the PR machine kicks into gear… backgrounding favoured journalists about the ‘real story’ behind it all."

Over years of reporting, The Australian says they’ve encountered "scores of women who have traumatic experiences with footballers".

"Without exception," Harvey and Halloran write, "they have been silenced by smear campaigns, payouts, non-disclosure agreements, legal threats and the fear of being pilloried in public as a slur, a crazy wannabe, a woman scorned."

Phoebe Burgess, 32, knows this better than most. She was married to Sam Burgess, the Golden Boy of rugby league, and believed to be one of the highest paid players of all time, for four years. She watched as every mistake he and his teammates made were dealt with by a team of people. She says private jets were booked. Wives were reassured. Narratives were spun. Players were cleared of misconduct and eventually framed as victims. So well does Burgess know the formula, she insists she could "run the show". Her speaking to the Weekend Australian Magazine was off script. This isn't how the story is meant to go.

Read more: Phoebe Burgess got publicly shamed for her ex-husband's misdeeds. He got a shot at redemption.

But Burgess watched last week as her former partner not only participated in SAS Australia, but won it. This is the same Sam Burgess who left a woman feeling "violated and disgusted" in May 2018, after allegedly exposing his penis and buttocks to her on a video call. Ultimately, all players were cleared of misconduct. After the story broke, another woman came forward claiming she'd had an affair with the South's player the year prior. He has since confirmed the affair.

In October 2020, Phoebe Burgess alleged that her former husband "forcefully squeezed her pregnant body" during a "drug-fuelled" psychotic episode inside their home. On Wednesday, Sam Burgess was cleared of all charges.

Burgess was also accused of intimidating his former father-in-law, Mitchell Hooke, in October 2019. He was convicted in February 2021, but successfully appealed and overturned the conviction in March.

In May, Burgess pleaded guilty to driving with an illicit substance present in his bloodstream.

It was only a few months later he was being afforded a redemption narrative on prime time reality television. Burgess' legal disputes were - at the time - still pending. And his former partner, who claims infidelity, drug use and alcohol problems destroyed their marriage, watched as he was framed as a sympathetic figure, widely regarded as the "stand out" of the season.

Listen to Mia Freedman, Holly Wainwright and I discuss the allegations made by Phoebe Burgess on Monday's episode of Mamamia Out Loud. Post continues below.

And so, she decided to speak to Weekend Australian Magazine about the NRL's culture of "misogyny, lies and cover-ups". She must have known a smear campaign was on its way.

On Wednesday morning, the hero story on the Daily Mail referred to a "secret essay" written by Phoebe Burgess back in 2019, in response to the "sexting scandal" her then-husband was embroiled in.

While Burgess told The Australian she reached out to the 23-year-old woman who felt "violated" by Sam Burgess exposing himself, the Daily Mail says the reality was very different.

"A newly uncovered and unpublished article she [Burgess] wrote reveals that, after the incident happened, she put the blame on the woman at the centre of it," the article says.

It is unclear who decided to leak this "uncovered and unpublished" article, two years after it was written.

Allegedly, Phoebe Burgess referred to the 23-year-old woman as a "fangirl" who was equally to blame. She described the incident as a "game of mutual group peek-a-boo", and explained that footballers like her husband have "an overly relaxed attitude that comes with their penises - and a** cracks."

The Daily Mail would have us believe that her "laidback attitude to such sexting appears at odds with her recent championing of women..." We are being told, in no uncertain terms, that Phoebe Burgess is a hypocrite.

But if we look a little closer, we also see the very mechanisms at play that Burgess has been referring to. Convincing players' wives that there is 'nothing to see here' is the first rule in the playbook. This - a 'loyal' wife defending her husband - is a classic example of the NRL PR machine at work. She wasn't immune to its influence. She was their first target.

At the time, Burgess was a new mother desperately trying to keep her family intact. It wasn't just her husband telling her this was normal, footballer behaviour, but an entire institution. In Burgess' own words, she was being gaslighted. Her own instincts were telling her one thing, while most people in her life were telling her another. If this "unpublished" article truly was written, it is surely understandable. The narrative being spun publicly was that this young woman had trapped the Rabbitohs' players by tricking them into sending naked photos. Imagine the narrative being spun to his wife.

The smear campaign against Phoebe Burgess has only just begun.

She is one woman who has gone up against one of the most powerful institutions in the country. That will come at a price.

Perhaps it is worth keeping that in mind. And when we read about her duplicity or hypocrisy, or watch as the tide begins to turn, we ought to ask ourselves: I wonder where that story came from?

K
kim.tompkins23 a month ago

Reply
Upvote
1 upvotes
This is such an important story to tell, for Phoebe and all women. It could help to call her  Phoebe throughout the story to make  it very clear who is doing what and who is the real villain. Just a thought.
S
schutt a month ago

Reply
Upvote
I don’t like how it is men that are getting redemption and women are dying. Remember Diana was fearful of the establishment she had been excluded from.
M
mamamia-user-482898552 a month ago

Reply
Upvote
2 upvotes
@schutt That's a mighty leap of logic there, with tenuous association at best. Diana was divorced, not "excluded". She also dismissed her own RPOs, so don't even start with "she was so unprotected". In contrast, the subject of this article isn't dead. She's still very much alive, and still making a living from being a public figure on the back of the very industry she is now calling out.
C
cat a month ago

Reply
Upvote
@mamamia-user-482898552 you know she dismissed her RPOs because they were reporting on her to Charles? Thats what Schutt is referencing.
C
chrissyinthemiddle a month ago

Reply
Upvote
1 upvotes
@cat Martin Bashir showed Diana false bank statements to convince her royal employees were being paid to spy on her. As a result, she dispensed with the royal protection officers that may have prevented her fatal car crash in Paris. This is why there has been an investigation and outrage from her sons and her brother about the devious tactics used by Bashir to get that interview. His lying had deadly consequences.
C
cat a month ago

Reply
Upvote
@chrissyinthemiddle yes he lied, but there was also very real surveillance from the palace. Her staff reported her affairs to the palace & those men would be sent overseas. One of them died in a an accident & thats why she was so fearful something would happen to her. Bashir did deceive her but she believed him because it matched her experience.
News
General
Opinion
True Crime
Politics
Sport
Explainer
Entertainment
Celebrity
Reality TV
Movies
TV
Books
Rogue
Royal
Lifestyle
Beauty
Fashion
Weddings
Home
Wellness
Health
Fitness
Travel
Food
Parents
Before The Bump
Pregnancy
Baby
Kids
Teens
School
Parent Opinion
Work & Money
Money
Finance
Career
Lady Startup
Relationships
Sex
Dating
Separation
Friendship
Family
Real Life
Couples