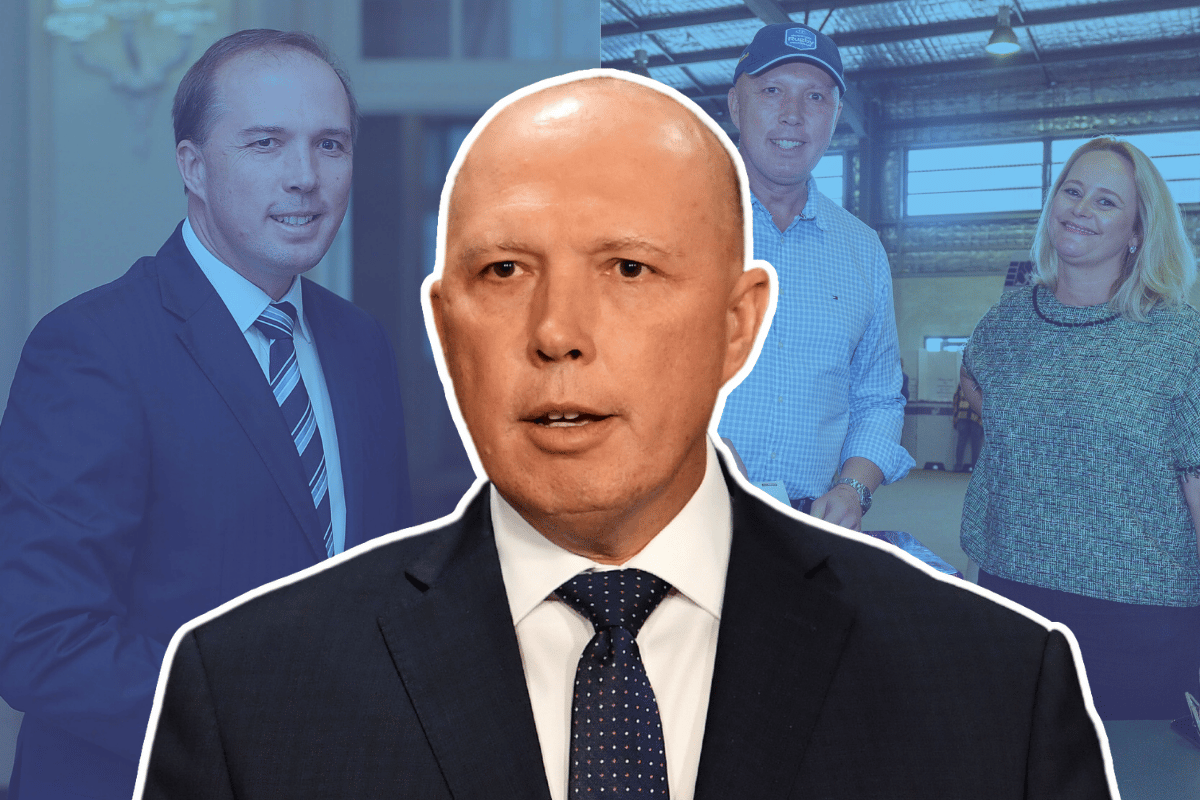 The 51-year-old has been elected to lead the party unopposed, and will serve alongside former environment minister Sussan Ley, who will be his deputy.

"As prime minister, you need strength of character and relentless resolve to see our country through the good and the bad times. They are among the character traits that I bring to this job," Dutton told media following the announcement.

The Dickson MP also paid tribute to "Scott Morrison, his wife Jenny, and his girls for the enormous contribution they’ve made not just to our country but the Liberal Party as well".

"We wish them all the very best in the next stage of their life."

Dutton previously spoke about his decision to put his hand up for the top job in a Facebook post last week.

"In a prime minister you need someone who won't buckle in hard times and will stand up for our country and I have proven that in the portfolios I've had," he wrote.

"My work ethic is second to none and I have the skill and experience having served five leaders and have learnt from each."

Dutton, who is the first Queenslander to lead the party, has also pledged to return the Liberals back to their core values.

"We aren’t the Moderate Party. We aren’t the Conservative Party. We are Liberals. We are the Liberal Party. We believe in families - whatever their composition. Small and micro businesses. For aspirational hard working ‘forgotten people’ across the cities, suburbs, regions and in the bush."

With the Liberals under a new leadership, here's everything we know about Peter Dutton.

Peter Dutton's upbringing and work in the police force.

Dutton grew up in Brisbane as the eldest of five children. His mother, Ailsa Leitch, was a childcare worker, and his father, Bruce Dutton, was a builder.

"My dad was a bricklayer, mum worked a second job so she could pay for school fees, so we didn’t have a privileged upbringing at all," he told Triple M in 2018.

"We were brought up in a wonderful family environment, so family is incredibly important to me."

At 18, he joined the Young Liberals after finishing high school at Anglican St Paul’s in Brisbane.

He later studied at the Queensland Police Academy and spent nine years in the force, working with the drug and sex offenders squad.

Recalling his time on the force during his maiden speech, Dutton said "as a police officer, I have seen the best and the worst that society has to offer. I have seen the wonderful, kind nature of people willing to offer any assistance to those in their worst hour, and I have seen the sickening behaviour displayed by people who, frankly, barely justify their existence in our sometimes over tolerant society".

After hanging up his police uniform, Dutton turned to study and graduated with a Bachelor of Business from the Queensland University of Technology.

He later founded a business alongside his father named Dutton Holdings, which purchased and developed childcare centres.

Since then, the 51-year-old has built up a property portfolio worth millions, including a Gold Coast beachfront home he sold last year on 'Millionaire’s Row'.

Dutton's start in parliament came at 30 when he was elected as the Member for Dickson in 2001.

Three years later, he was promoted to the ministry as Minister for Workforce Participation. 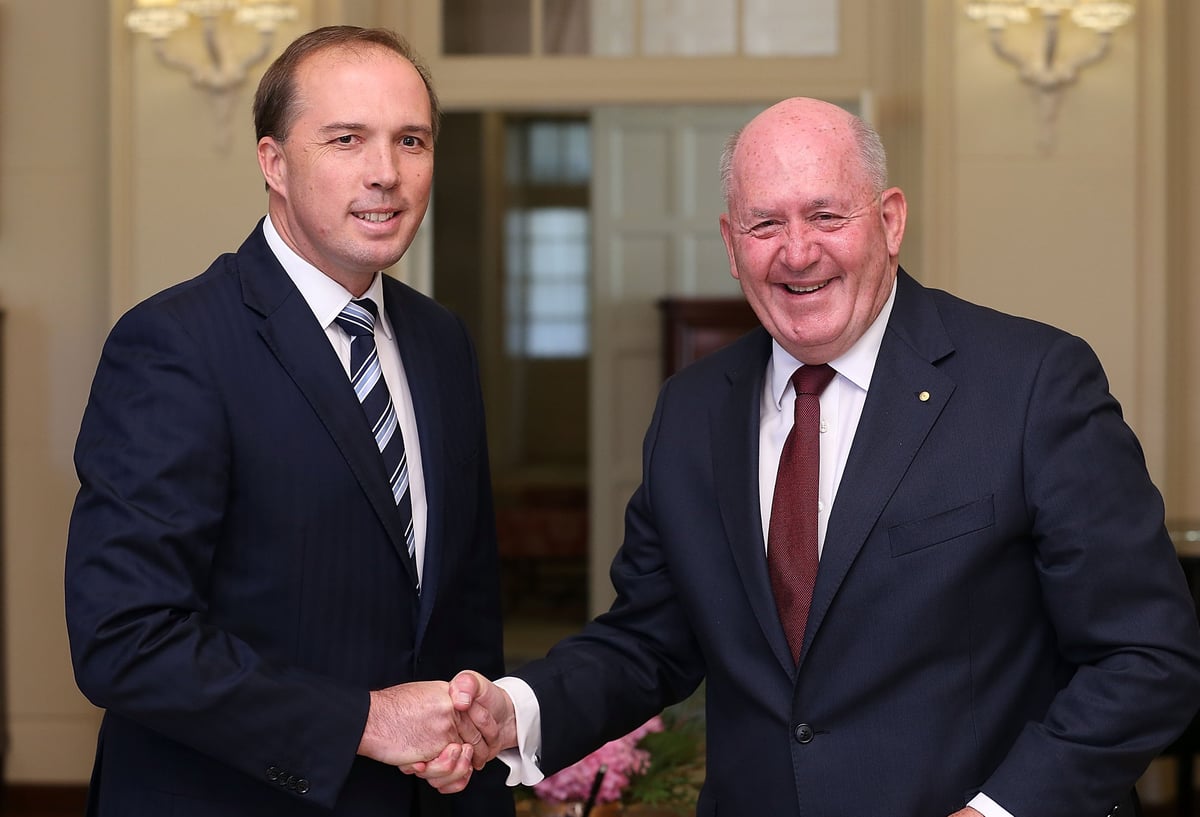 Peter Dutton is sworn in at the Minister for Immigration and Border Protection Peter Dutton by Governor-General Peter Cosgrove in 2014. Image: Getty.

Most recently, he served as the Minister for Defence under former Prime Minister Scott Morrison.

However, during his two decades in parliament, Dutton has found himself at the centre of a number of controversies.

Apology to the Stolen Generations.

In 2008, he infamously boycotted the apology to the Stolen Generations as the only member of the Coalition frontbench absent when then-Prime Minister Kevin Rudd apologised.

At the time, he defended his decision, telling ABC's Q&A program the apology was "something which was not going to deliver tangible outcomes to kids who are being raped and tortured in communities in the 21st century".

He later told the Sydney Morning Herald he regretted his choice, saying "I didn't appreciate the symbolism of it and the importance to Indigenous people".

When it came to the legislation of same-sex marriage in 2017, he personally voted 'no', telling 2GB radio he'd "encourage people to do the same".

However, he later voted in favour of same-sex marriage in parliament after it was clear there was majority support for it.

Last year, Dutton ordered his department and serving military personnel to end events where "personnel are encouraged to wear particular clothes in celebration" after staff wore rainbow clothes to an International Day Against Homophobia, Biphobia, Interphobia and Transphobia event.

"Our task is to build up the morale in the Australian Defence Force, and these woke agendas don’t help," he told the Sydney Morning Herald.

"If having a morning tea for reconciliation week, international women’s day or international day against homophobia is stopping our national security efforts then we have a real problem," she told the publication.

"This has Peter Dutton written all over it, the Federal Minister for Culture Wars."

Outside of politics, Dutton is the father of two sons, Harry and Tom, whom he shares with his wife, Kirilly.

The pair married in 2003, after Dutton separated from his first wife whom he married at the age of 22.

The 51-year-old also has a daughter named Rebecca from a previous relationship. 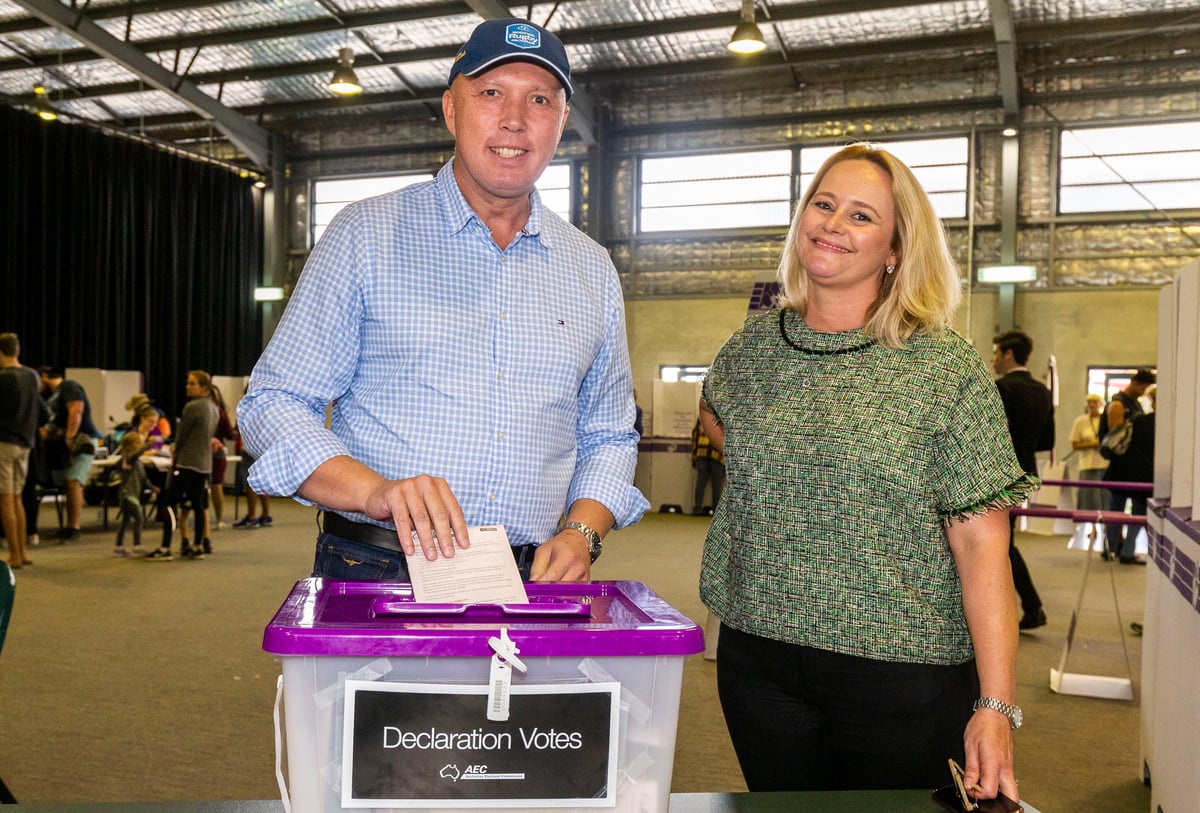 Peter Dutton and his wife Kirilly voting in the 2019 election. Post continues below. Image: AAP.

Last week, Dutton opened up about his personal life when he shared he has a rare skin condition, after Labor MP Tanya Plibersek likened him to Harry Potter villain Voldemort.

"Well I think there will be a lot of children who have watched a lot of Harry Potter films who will be very frightened of what they will see at night, that’s for sure," she told Brisbane radio station 4BC.

Dutton later said the comment, which Plibersek has since apologised for, was "water off a duck's back".

"I’m not bald by choice. OK. And, you know, I was diagnosed with a skin condition a couple of years ago, which is just a reality of getting older as well," he told Nine Radio.

"So, you know, I’m not the prettiest bloke on the block, but I’m going to be pretty effective. And I love this country. We live in the best country in the world."

S
senga a month ago

Reply
Upvote
Why is he saying ""As prime minister..." - doesn't he mean "As oppostion leader"?
L
laura__palmer a month ago

Reply
Upvote
3 upvotes
There's plenty to point to that shows this man is a terrible choice and not fit to be PM that does not involve his physical appearance. Focus on his views and his actions while in parliament, not what his head and face look like. That is irrelevant.
M
mb1111 a month ago

Reply
Upvote
@laura__palmer luckily we live in a democracy with many parties for us to choose from. Across all the parties it is up to you to find the one that suits you.  It’s not your choice who is the opposition leader. If the opposition party is exact the same as the government then what is the point?
L
laura__palmer a month ago