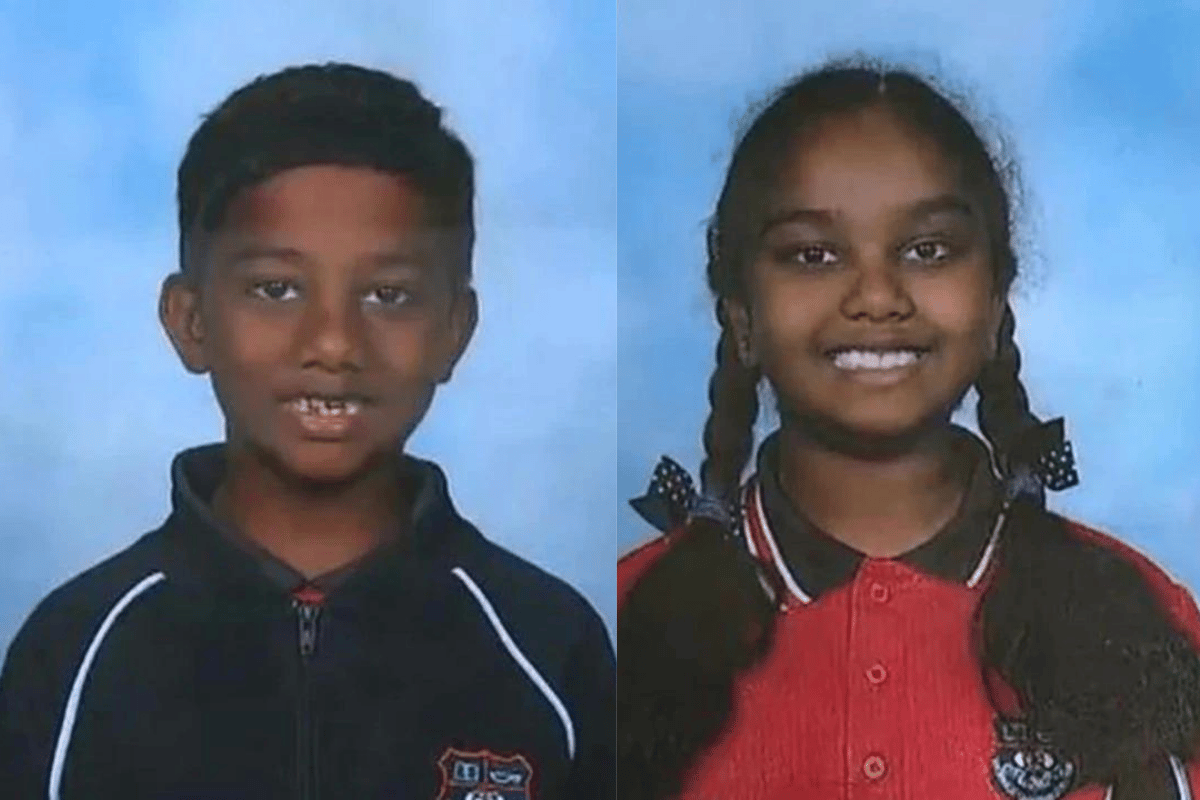 This post deals with the topic of suicide and family violence and may be triggering for some readers.

On Monday afternoon, West Australian police confirmed the bodies of a woman in her 40s, a 10-year-old girl, and an eight-year-old boy were found in a burnt-out vehicle in the Perth suburb of Coogee.

The two children have been identified as Abiyah and Aiden Selvan. Abiyah was 10. Her brother Aiden was eight.

Their mother, Selvamma Doreswamy, is believed to have started the fire in their family vehicle. All three of their bodies were found in the back seat of the hatchback.

Today, detectives have confirmed they are not looking for any suspects in this case.

Watch: The Polished Man campaign to end child abuse and violence against children. Post continues below.

Video via The Polished Man.

"Three parties have died in the rear of a car by a fire that has been started by one of those parties," Detective-Inspector Quentin Flatman said at a recent press conference.

"There is no need for anyone to be concerned within the community as to any other person being at large. There is no rationale as to why this has occurred. All of us want answers. There's a lot that we don’t know and it’s very, very tragic. Any untimely death is tragic but more so when there's children involved. From this point, our role is to make sure no stone's left unturned."

The children's father, Selvan Govindhan Vairavan, had left on the weekend to visit his sick mother in the United States and received the news en route at Doha Airport. He arrived back home in Perth on Wednesday night.

"His reaction was what we would all expect in the circumstances. He is currently on an aircraft coming home so he can look for answers himself. The father is in shock. He's quite shocked and is looking for answers himself. If this couldn't get any worse, that poor man will have to be on a plane alone," Detective-Inspector Flatman said.

There are more tributes for two Perth children killed in a car fire believed to be a suspected murder-suicide. @alexiapesce #9News

The Detective-Inspector added the relationship between the couple appeared to be "a normal, healthy, happy" one according to all accounts so far. According to police, Govindhan Vairavan was at a loss to understand his wife's actions.

Detectives are continuing their investigations into the matter and interviewing family and friends close to the family. Some of those close to the children and their parents shared their devastation.

Speaking to The West Australian, a close friend of the family Sam Revington said there had been no signs that anything was troubling the mother. Revington and his wife had only just last week visited the mother and hadn't noticed anything out of the ordinary.

"Nobody understands why this happened. She gave us coffee and everything. Everything was normal. They were really happy in Perth. That's why we are really shocked. We couldn't find any reason for this to happen. They had a good life."

Listen to Mamamia Out Loud: What happens after the worst day of your life. Post continues after audio.

Loved ones have shared their concern for Abiyah and Aiden's father during this difficult time.

"He cared so much for his family: I know that. I don't know what to tell him. I don't have the words to explain or comfort him. But I'm going to see him tomorrow or tonight," Revington said.

Classmates, parents, teachers and staff at Providence Christian College in Perth where the siblings attended are also hurting.

Principal Bill Innes said the school community was in mourning over the deaths of Abiyah and Aiden, saying to 9News: "You're never prepared for something like this. We have a thing called a critical incident policy and it sits in a folder somewhere in the back there and you hope to never pull that out. We had to with this."

He continued: "This was so totally unexpected, they were a lovely family and I guess we don’t understand. It’s not our place to understand, but it came as a huge, huge shock. There's been a sense of devastation throughout the college."

"Loved by everyone, full of energy, and smiles as big as the world."

Abiyah was described as a "talented, kind and thoughtful" person who was "just one of those kids who was loved by everyone". One friend said Abiyah was "the brightest light in the world".

They penned a letter to Abiyah saying: "Remember I always love you. It pains me to know I will never see you smile, touch you, laugh with you, and even wave to you. I will never forget you. See you in heaven."

Aiden has been remembered as "a kid who gave 110 per cent in everything" and was "full of energy". A message dedicated to Aiden from a classmate simply said: "I will miss you."

In the first three weeks of 2022, Australia lost five children to acts of violence. This month, Abiyah and Aiden are now the 13th and 14th children lost to violence this year, as reported by Red Heart Campaign founder and senior journalist Sherele Moody.

As she noted: "It's easy to say things [at home] were normal, but none of us knows what is going on behind closed doors. One of the clear things my research into violent deaths shows is that domestic violence murders never happen in a vacuum - there's always precursors." The scene of the crime. Image: AAP.

Red Heart Campaign founder and senior journalist Sherele Moody noted: "It's easy to say things [at home] were normal, but none of us knows what is going on behind closed doors. One of the clear things my research into violent deaths shows is that domestic violence murders never happen in a vacuum - there's always precursors."

So, what are the precursors in this instance? I don't see anything that the school noticed or anything that neighbours noticed. They seem far more hidden in this case, so let's not make assumptions about the father or assume guilt - I'm far more worried about the instances where people can see it coming from a mile away and STILL nothing happens to prevent it. When women have filed AVOs and they are ignored; where they report it to the police and they can't or won't do anything, or where the laws don't protect against coercive contorl or define consent adequately.
C
cat 5 months ago

Reply
Upvote
1 upvotes
@talezassian actually you are the one making assumptions- no one is saying that that father is abusive and he's not a suspect in any way. They're saying that there will have been signs that this mother was a danger to the children.

We shouldn't only care about abuse that leaves a physical mark, we also need to investigate these cases to identify the signs of coercive control and emotional abuse.  Thats the information we need to create meaningful legislation to prevent coercive control.
C
chantelledolphin 5 months ago

Reply
Upvote
5 upvotes
I feel like if this was a. dad it would be reported as ‘a father murdered his children’. We need to make sure we are reporting accurately for both males and females when it comes to this sort of thing.
M
mamamia-user-482898552 5 months ago