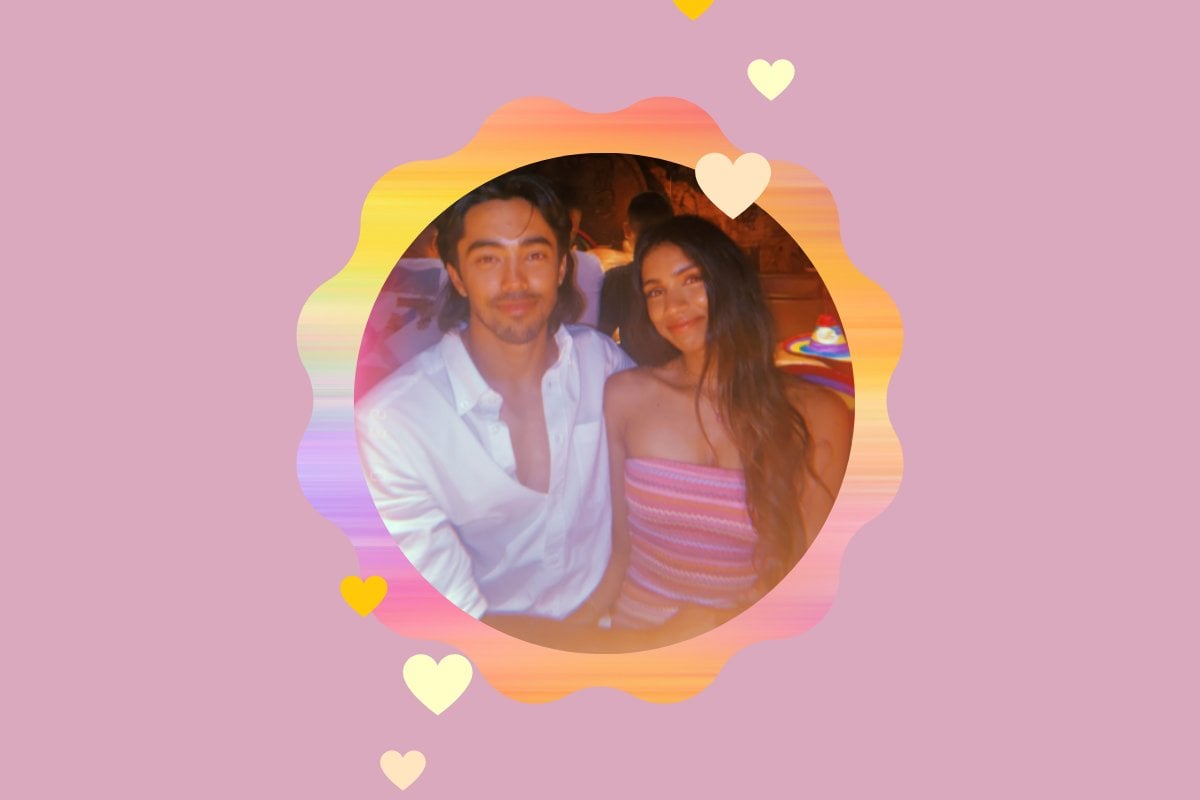 I’m a sucker when it comes to any kind of personality or type-sorting quiz.

Silly or introspective, Love Languages or Myers Briggs, I have literally done them all. And probably ...actually definitely, more than once.

This year, The Success Experiment written by Lillian Ahenkan (known to most as Flex Mami) was released and as an avid consumer of all things FLEX you better believe I clicked *Add to Cart* the moment that pre-order sale went live.

I was about halfway through reading the “Know Who You Are” chapter, when I turned to a page titled “The Johari Window”.

A quirky name? A cute diagram? I was hooked.

The Johari Window is at its most basic level, an exercise to better understand how you see yourself vs. how others perceive you. It was created by American psychologists Joseph Luft and Harrington Ingham in 1955 as a method developed to enhance communication between colleagues.

The exercise takes five minutes but will make you want to chat about your results for hours.

So, how does it actually work? 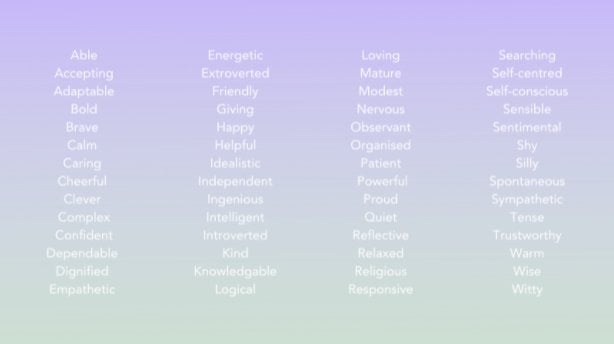 From a list of 56 adjectives, you pick 10 that YOU feel best describe yourself. At the same time, someone you’re close with (this could be a best friend, a parent or in my case, my boyfriend) will pick 10 adjectives from the same list that THEY think best describe you. Unbridled honesty is key here.

Neither one of you can know which adjectives the other has picked until both have chosen...and then the fun begins. 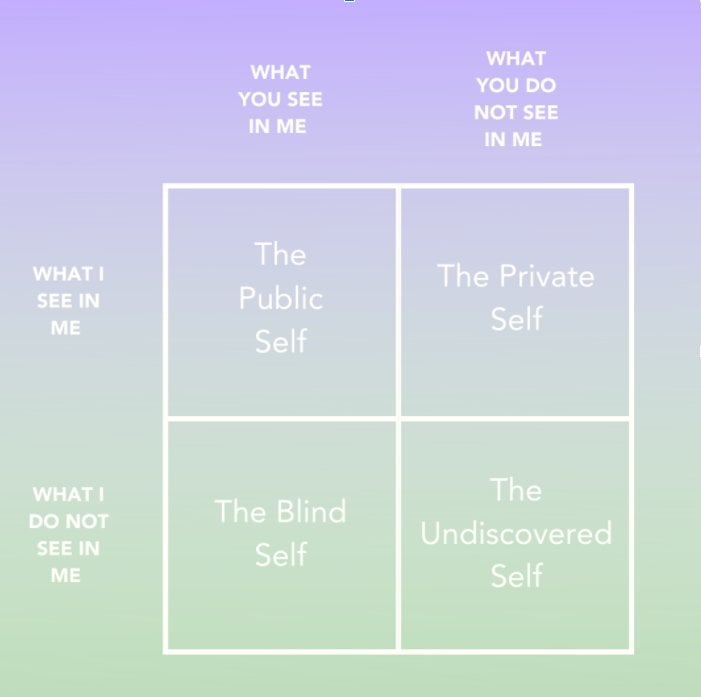 Using a diagram as seen above, you write all the adjectives that overlap and those that don’t within four quadrants of the window. Depending on whether your answers correlate, each quadrant will reveal one of four situations.

After reading about the Johari Window, there was no way I wasn’t convincing my boyfriend to do the exercise with me.

Thinking ahead, on the grounds of how well my boyfriend knew me, I expected that we would have at least 7-8 words that overlapped and maybe just a few obscure ones that didn’t.

My boyfriend is the kind of partner who knows my nuances so well he can sense something is up without me having to say anything. He’s hard-wired my behaviours into his brain and watched me exhibit every mood on the spectrum. This was the guy who knew he was about to be forced to do some sort of quiz just by the look in my eye when I said “Oh my god, I have to show you something.”

After a rushed elevator pitch of what the Johari Window was, I grabbed two pens and a couple scraps of paper and we got to work.

Separately, we scribbled down words we thought best described me. Once we had both picked our chosen words, I eagerly snatched his paper and began to sort them into the Johari Window diagram.

To my surprise, we only had 3 words that overlapped. THREE.

I was confused, not just because of the lack of matching words but because while it took me a whole five minutes to select the words, it took him all of about 40 seconds. He was clearly more confident in who he perceived me to be than I was.

After letting go of my initial shock, I glanced down to the quadrant titled “The Blind Self”. (These were the words he had picked to describe me that I hadn’t picked myself.)

I skimmed over the list and saw that there were quite a few words that I agreed with but wouldn’t necessarily have put in my top ten. For example the word “sensible” came up.

In all fairness, I’d like to think I am pretty sensible but there were definitely words I thought depicted me better.

I was drawn to ask him, why? Why ‘sensible’. Especially considering he is one of the very few people who have seen me at my least sensible. His response? “Well, financially, you’re one of the most sensible people I know.”

I hadn’t even considered that, but it obviously held some importance to him, which intrigued me and opened up a very candid conversation about money. Something we didn’t discuss that often.

Psst! While you're here, have a listen to the latest episode of The Undone - where Lucy and Em talk all things dating with an STI. Post continues after podcast.

He asked me why I put ‘nervous’ as one of my adjectives. As he and I both know, I have been diagnosed with a Generalised Anxiety Disorder, so picking that word seemed like a no-brainer to me. Being nervous was embedded within my DNA and he knew that.

He acknowledged that this was true but responded saying: “You may feel nervous but it definitely doesn’t show.”

This comment almost made me spiral. As a textbook overthinker, I’d always believed I was acutely aware of how I presented to other people.

Suddenly we had all these prompts to open up conversations we had never had before.

We dissected our results and the reasoning behind why we felt strongly about certain words and indifferent to others. We questioned why there were parts of ourselves we clung to even when we didn’t exhibit those behaviours outwardly. We were made to understand that despite what we think of ourselves, in most cases, how you are depicted by others simply can’t be controlled.

Although the Johari Window was originally designed all those decades ago to improve workplace relationships, I can genuinely attest to the fact that my romantic relationship benefited because of it. In a big way.

The casual nature of the conversation took away the pressure that usually piles on when you’re brutally honest with someone you love. We were able to communicate openly and honestly and now we have a deeper and more layered understanding of who we are to each other and ourselves.

So, if you’re ever stuck at home on a rainy weekend and want to open a big old can of worms into your relationship dynamic, I highly recommend this. Alongside a cheese platter, perhaps, to soothe the mood.

A very interesting article . As a fellow quiz fanatic, I enjoyed reading it. The Johari Window is a oldie but a goodie. Looking forward to reading more features like this. Well I know what I will doing this rainy Sunday.   Sweetie Pie , I was reading this really interesting article…………