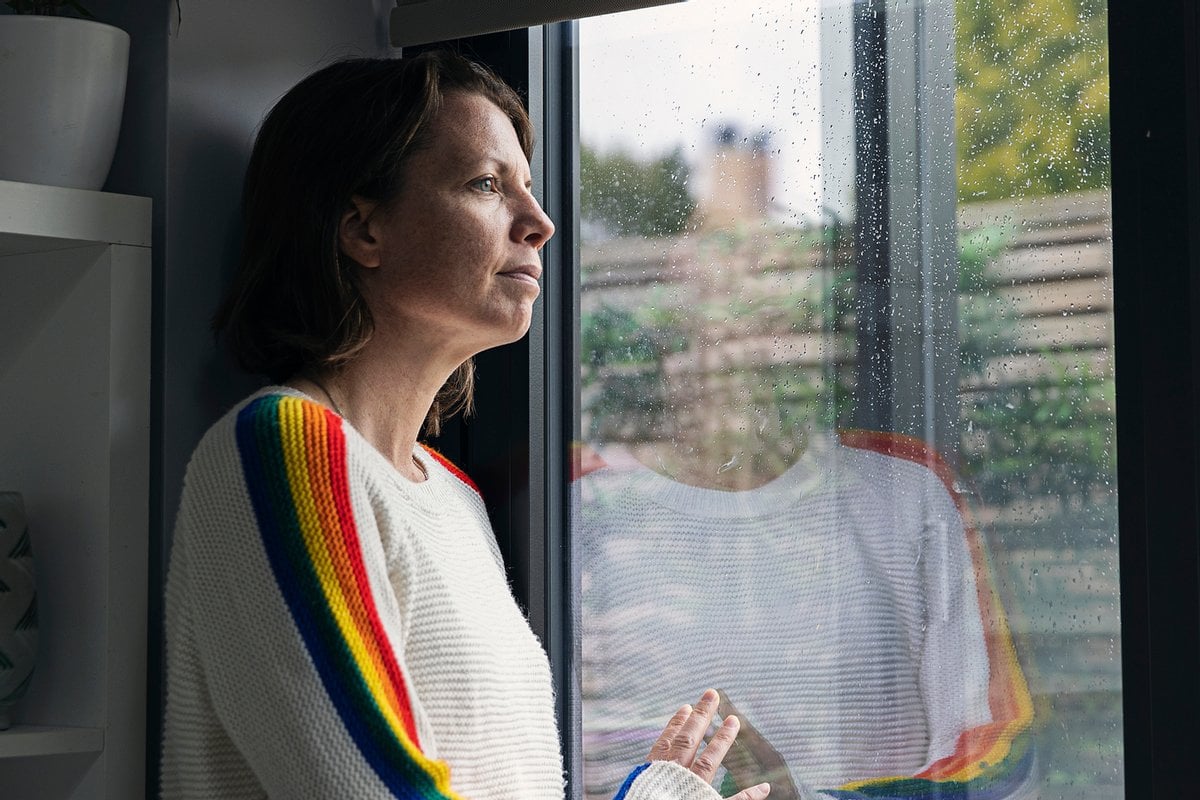 There’s so much that’s great about being a woman in your 40s.

You feel more vibrant and self-confident than ever before, and you care a whole lot less about what other people think of you and your life choices.

But about six months ago, I started feeling completely depleted of energy, and I began to wonder what was wrong with me.

On top of this, things were happening that were completely out of character for me.

On Mamamia's daily news podcast, The Quicky, we talk all things menopause. Post continues below.

I was absentminded – like the time I was walking around the house looking for my mobile phone, yelling at the kids for the one who stole it to give it back, all while I was holding it against my ear, talking on it.

One day I stared at the computer screen trying so hard to remember the access key to my bank account – the same number I’ve typed daily for the last 15 or so years, but I just couldn’t.

I spent days staring at yet another empty Word document, praying for some words to come out of my scattered brain.

I’d spend a few mornings a week feeling like I’d just come out of a sauna.

And even though I’ve always been prone to headaches due to scoliosis, they reached the next level.

I knew it was time to visit the doctor, because I started seriously wondering whether I had a brain tumour – the pain was that bad.

The doctor suspected it may be my eyesight causing the headaches (she was in part right; it turned out I did need glasses for driving).

She also reassured me that it was highly unlikely I had a brain tumour, but made no mention of my symptoms potentially being related to hormonal changes.

As the months passed, I felt my energy levels drop further. My mood was low. My patience with my kids was wearing thin. I started to feel exhausted and not myself, all day every day.

And even though I’m on the pill, my periods became irregular. At one point they stopped for two months and I panicked that I was pregnant – and there was absolutely no way I wanted to be pregnant nor have another baby at 46. I know I am done in that department. So just the thought of being pregnant again made me cry (my last pregnancy at 37 was tough enough!).

Then I cried more because I felt so guilty that I’ve been blessed enough to be able to bear children when so many can’t.

Thankfully, I got my period the next day, because I was done with the tears (especially since I hardly ever cry.)

That’s when I realised I needed to see a doctor again.

I was finally sent for blood tests to check my hormone levels, as I’d heard that menopause symptoms can start when you’re in your 40s. And I really wanted to know whether that's what was happening to me.

Days later the doctor told me that I was, quote, "too young" to be experiencing menopause, and that all my blood tests came back just fine. The diagnosis? I was just a busy mum of three who needed a good rest.

If only I felt relieved at that response.

As the saying goes, 'when you know, you know', and I knew something wasn’t quite right. The low mood, the lack of enthusiasm, the forgetfulness, the brain fog, the sudden zero tolerance for BS and people in general, the crankiness, the irritability, the weight gain around the tummy, and the obvious changes in my menstrual cycle.

By chance, I stumbled across an Instagram post that led me to Amanda Thebe, author of Menopocalypse: How I Learned to Thrive During Menopause, and this amazing lady has become my saviour.

As Amanda states in her book, "Most people don’t realise that perimenopause (or menopause transition) can start affecting women in their late thirties or early forties... Perimenopause is the phase when most symptoms appear, and they can last up to ten years."

Not only has she made me feel 'normal', as she describes her own experiences during her menopause journey (from perimenopause right through to post-menopause, where she’s at now), but she has given me the confidence to talk to another doctor about navigating my own journey through what I now know is perimenopause.

This doctor and I discussed the changes I've been going through, and she has offered to refer me to a gynaecologist to talk through a number of options, such as Hormone Therapy, should I feel I need it.

But what I really needed was to know that what I was experiencing was not a figment of my imagination, or a brain tumour, or early onset dementia, and was entirely what I suspected: the next stage of my life, the 'Menopocalypse'.

I think knowing this now is going to make all these symptoms a lot easier to bear, for the next however many years...

Lidija Zmisa is a mum of three girls, wife and writer. You can follow her on Instagram.

Reply
Upvote
@guest147 Early menopause can come with significant health issues and warrants further investigation and management. For instance, your bone health can suffer because of the premature drop in oestrogen levels and may lead to osteoporosis down the track if not followed up appropriately.

Reply
Upvote
1 upvotes
Doctors really need to remove the phrase "you're too young for ..." from their vocabulary. My husband was told he was "too young" for it to be bowel cancer, guess what it was? He's fine, because luckily the doctor sent him for tests anyway, but how many people (especially women) have suffered longer with their symptoms, had diseases progress, or get to the point where it's too late for treatment, just because they were assumed to be too young? Also, what kind of doctor doesn't suspect that a woman in her mid-forties who is having mood swings, irregular periods, and hot flashes might be going through menopause?
Resources
Very Peri
Skin
News
General
Opinion
True Crime
Politics
Sport
Explainer
Entertainment
Celebrity
Reality TV
Movies
TV
Books
Rogue
Royal
Lifestyle
Beauty
Fashion
Weddings
Home
Wellness
Health
Fitness
Travel
Food
Family
Before The Bump
Pregnancy
Baby
Kids
Teens
School
Parent Opinion
Work & Money
Money
Finance
Career
Lady Startup