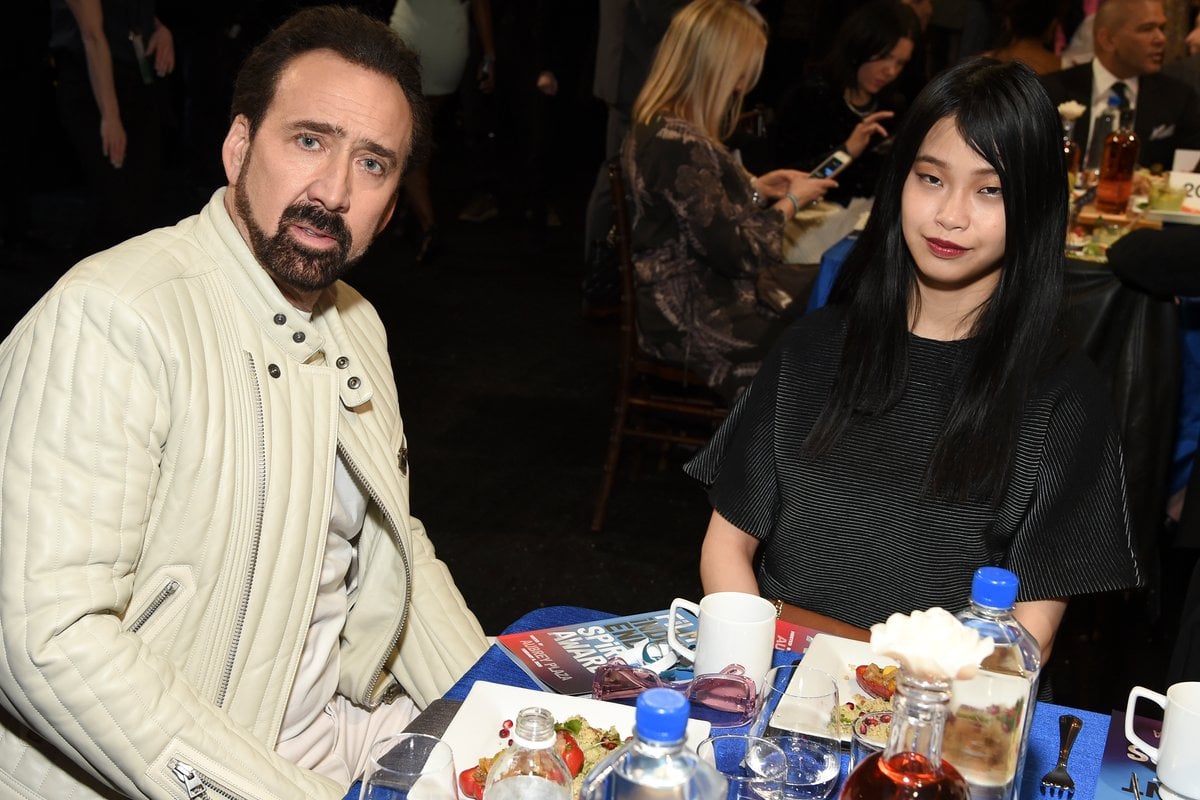 Nicolas Cage got married for the fifth time last year.

The actor married his 27-year-old fiancée, Riko Shibata, at the Wynn Casino and Hotel in Las Vegas on February 16.

"Yes, it’s true, we are very happy," the 58-year-old said, confirming the marriage in a statement to Page Six at the time.

Watch: Our favourite celebrities doing impressions of other celebrities. Post continues below.

"I know five is a lot. But I think I got it right this time," he told the Los Angeles Times.

The pair were later seen publicly for the first time when they were photographed visiting Cage's nine foot tall pyramid tombstone, which is located in the oldest cemetery in New Orleans.

Shortly after their relationship began, Cage and Shibata spent more than six months apart due to the COVID-19 pandemic.

"She left New York and went back to Kyoto, Japan, and I went back to Nevada and I haven't seen her for six months," Cage told his brother Marc Coppola on his New York radio show.

While they were living apart, Cage proposed over FaceTime.

"We're really happy together and we're really excited to spend that time together, so I finally just said, 'Look, I wanna marry you,' and we got engaged on FaceTime," Cage shared.

"I customised and personalised it and I actually sent it to her [via] FedEx."

Amid Nicolas Cage's new marriage, here's what we know about the actor's previous relationships: 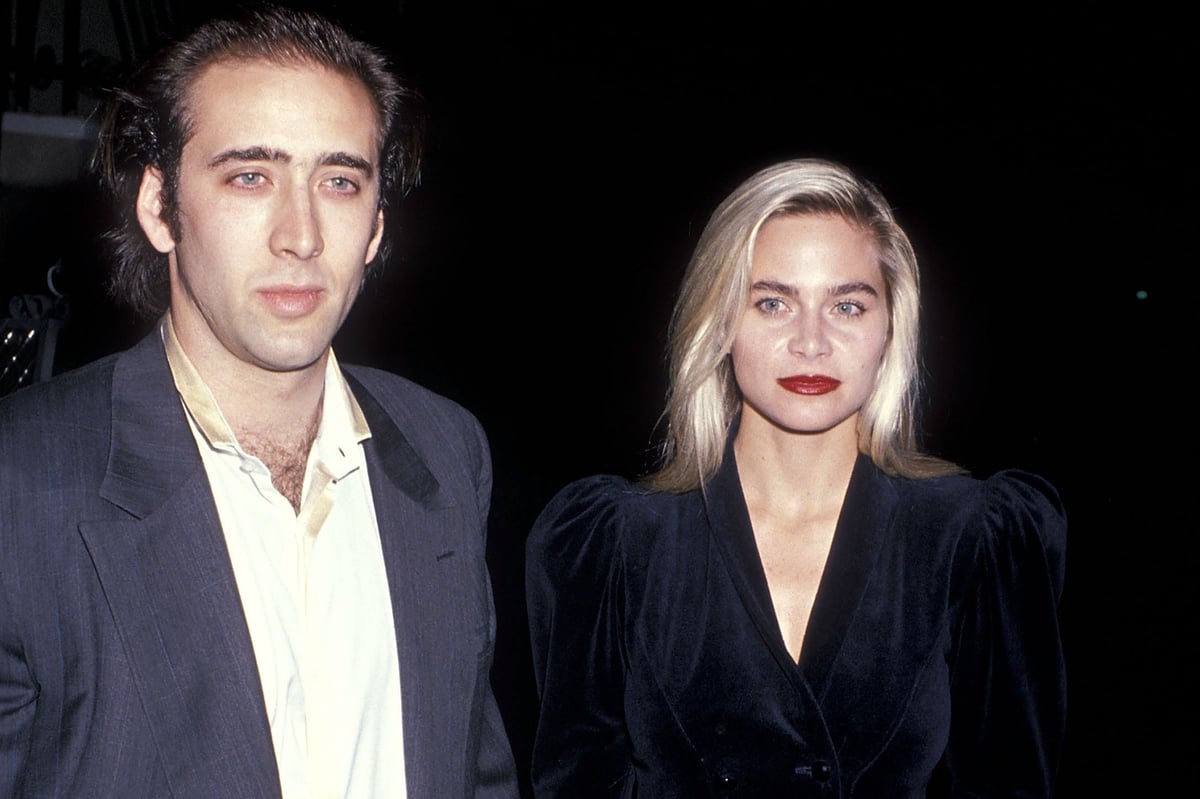 Now 30 years old, Weston has forged his own career in Hollywood as the lead singer in black metal bands Eyes of Noctum and Arsh Anubis.

Weston, who is four years older than Cage's new wife, also appeared in his father's 2005 film, Lord of War.

From 1995 to 2001, Nicolas Cage was married to fellow actor Patricia Arquette.

According to Paper Magazine, the couple's friendship first began when Cage, then 23, ran into Arquette at a deli in Los Angeles in 1987.

After jokingly telling Arquette that he would marry her, the then 19-year-old sent Cage on a quest, providing the actor with a list of things to find to get her to marry him.

"I wrote all these things that I thought were impossible: getting J. D. Salinger's autograph, a Hill tribe wedding costume, steal me a Bob's Big Boy statue, all of these things," Arquette recalled in a 2018 interview on Watch What Happens Live with Andy Cohen.

After Cage delivered most of the items on Arquette's list, the pair agreed to date and even travel to Cuba together. However, they later reportedly parted ways after Cage had a public meltdown at the airport over an issue with their plane tickets. 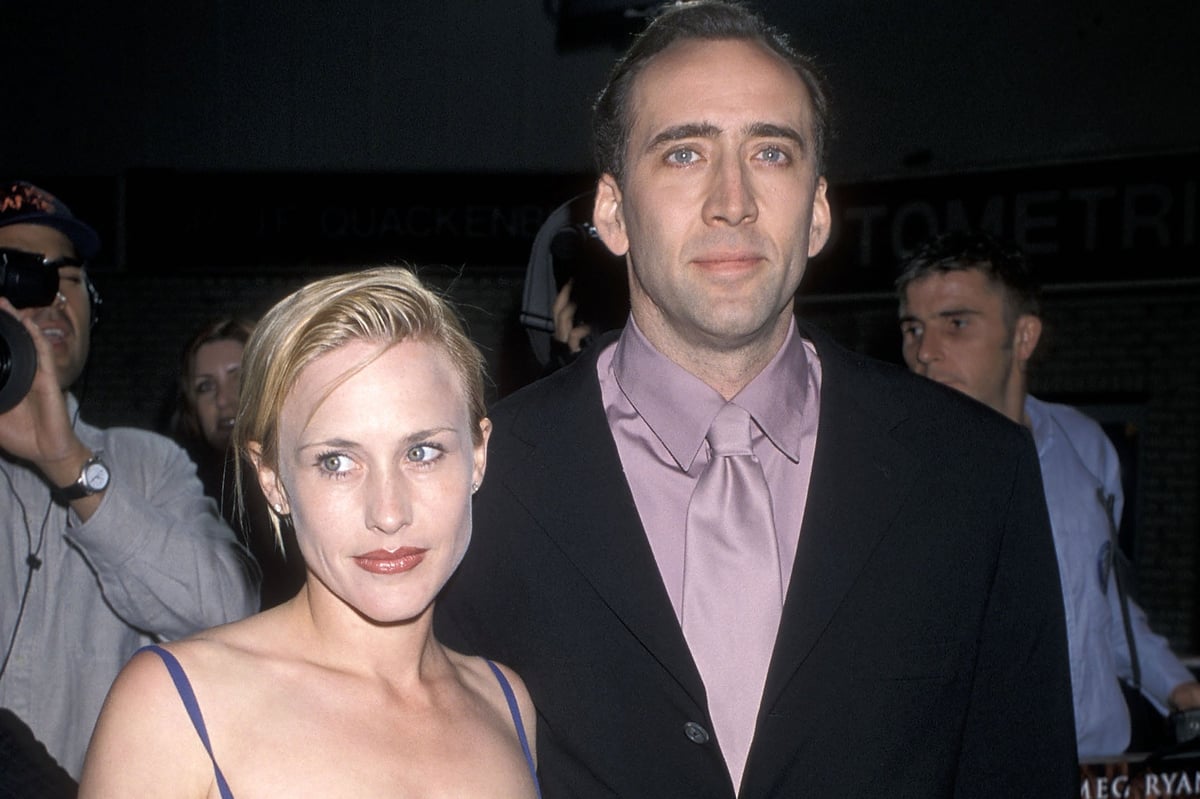 Nicolas Cage and Patricia Arquette. Image: Getty. In the years after their brief relationship, the two actors started families of their own, with Arquette welcoming a son with her boyfriend at the time, Paul Rossi.

But in 1995, Cage and Arquette later reconnected after running into each other at the same Los Angeles deli where they met eight years earlier.

"When she showed up at my house dressed head to toe in black vinyl, carrying a big purple wedding cake, I knew I was with the right woman," Cage reportedly said.

Two weeks later, Cage and Arquette were married in a 10-minute ceremony in Carmel, California.

After five years together, the couple later separated in 2000, before finalising their divorce in 2001.

"It's always hard to make that decision to get divorced," Arquette told Paper Magazine in 2002.

"We've both moved on with our lives, and I think it's important to honour the people we're with now, and concentrate on the future."

The relationship raised eyebrows as Cage was well known for being an Elvis Presley super fan. Cage even used Elvis as the main inspiration for his role in Wild at Heart.

The couple later filed for divorced after just 107 days of marriage. 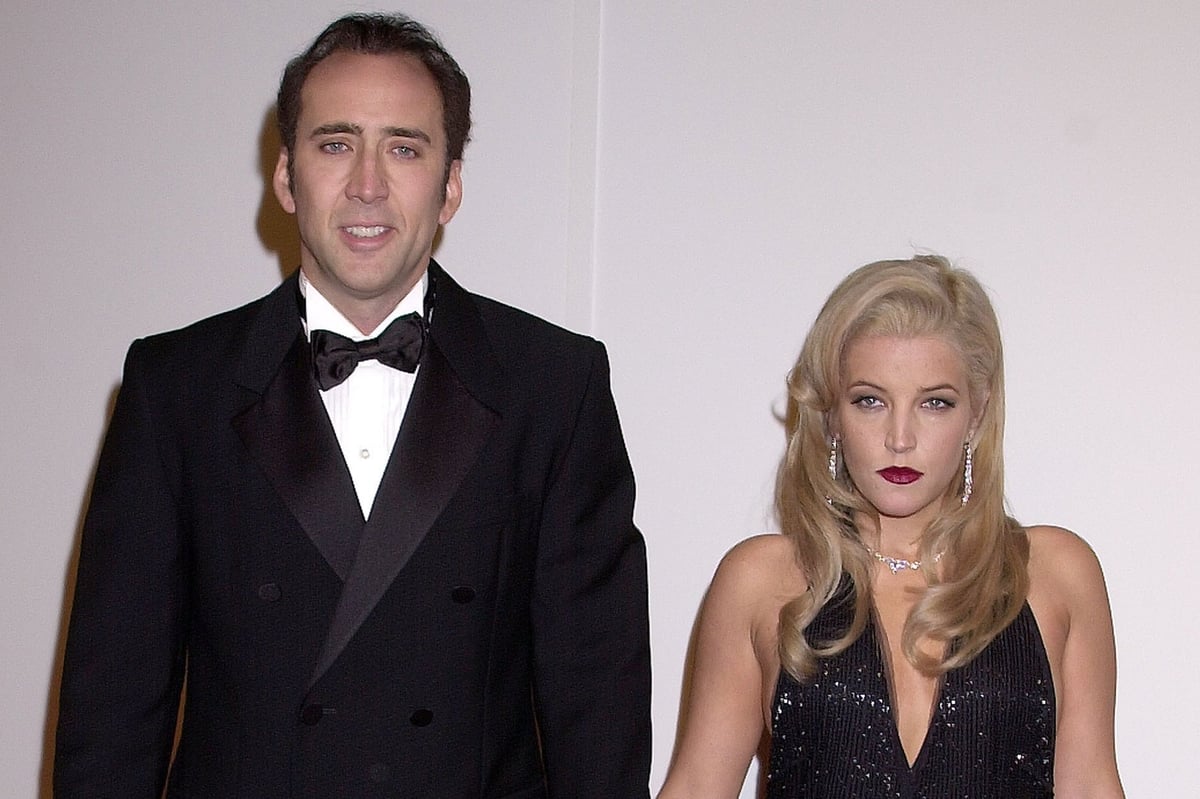 Nicolas Cage and Lisa Marie Presley. Image: Getty. "It was kind of one of those things where you marry someone hoping – I mean we'd already had – we'd been together for two years before we got married, so – it was one of those things where you're marrying hoping that you're going to either stabilise it or it's going to, you know, accentuate all that was going on prior to what was problematic," Presley later told Larry King, according to The Sun.

The couple, who share a 20-year age difference, first met when Kim was working as a waitress in Los Angeles. 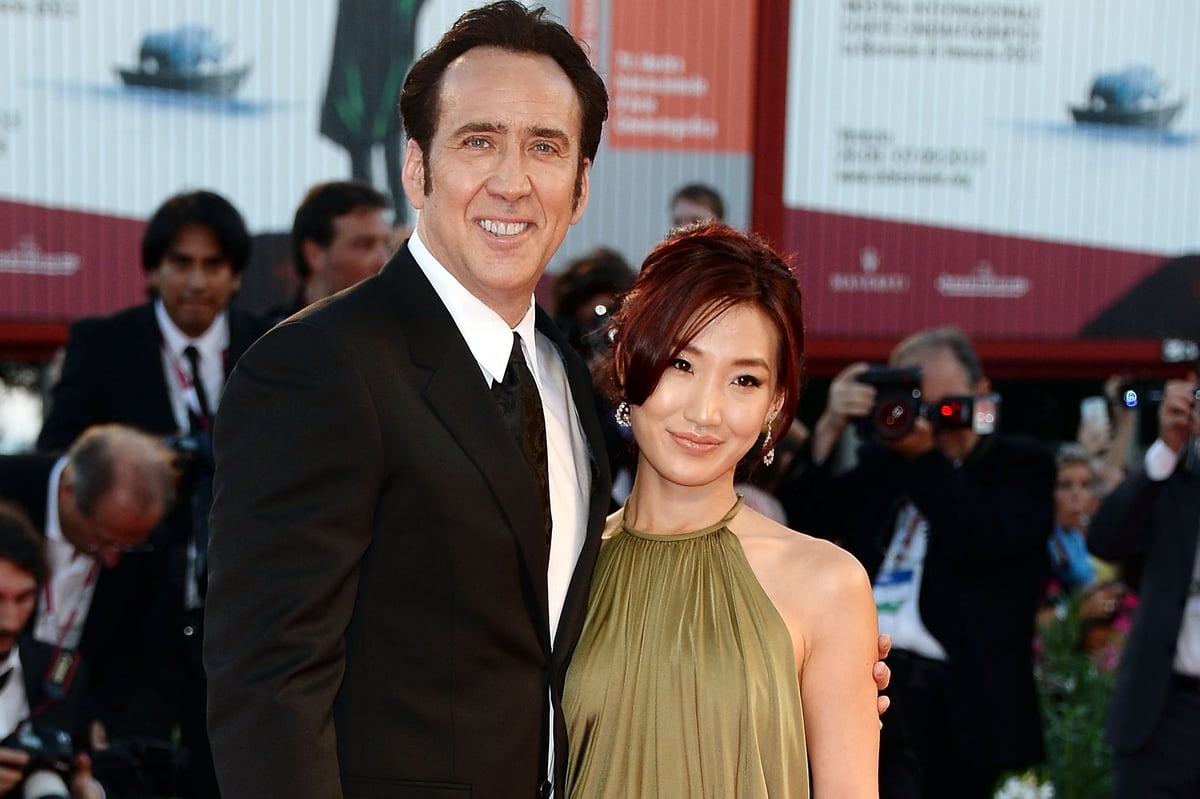 Nicolas Cage and Alice Kim. Image: Getty. They married two months after meeting before welcoming a son, Kal-El, named after Superman, in 2005.

While the couple separated in 2016, they have since remained friends.

In fact, Cage's recent wedding to Shibata was attended by both Kim and Kal-El.

After their divorce, Cage told The Guardian: "I don't really count those two marriages [to Lisa Marie Presley and Patricia Arquette], I don't think they belong on my record. The real marriage for me was the 14 years I had with [Alice Kim] and the child we have together."

In 2019, Nicolas Cage was married to Erika Koike for just four days.

Although the couple were together for a year before they married, Cage later asked for an annulment after claiming that he was "too drunk" to get married. 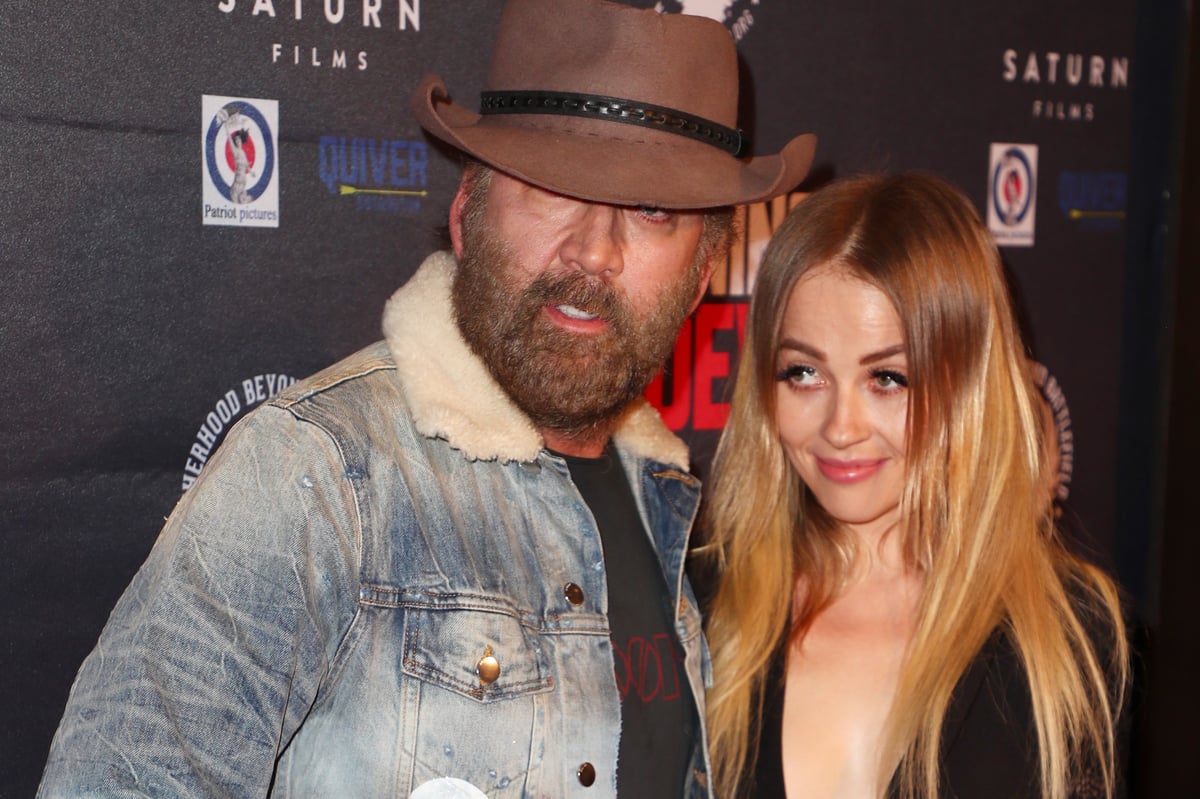 Nicolas Cage and Erika Koike. Image: Getty. Cage argued that he drank "to the point of intoxication" prior to the couple's wedding.

"There was a recent breakup, I don’t really want to talk about it," he later told The New York Times Magazine.

"I was pretty upset about that and the way things happened."