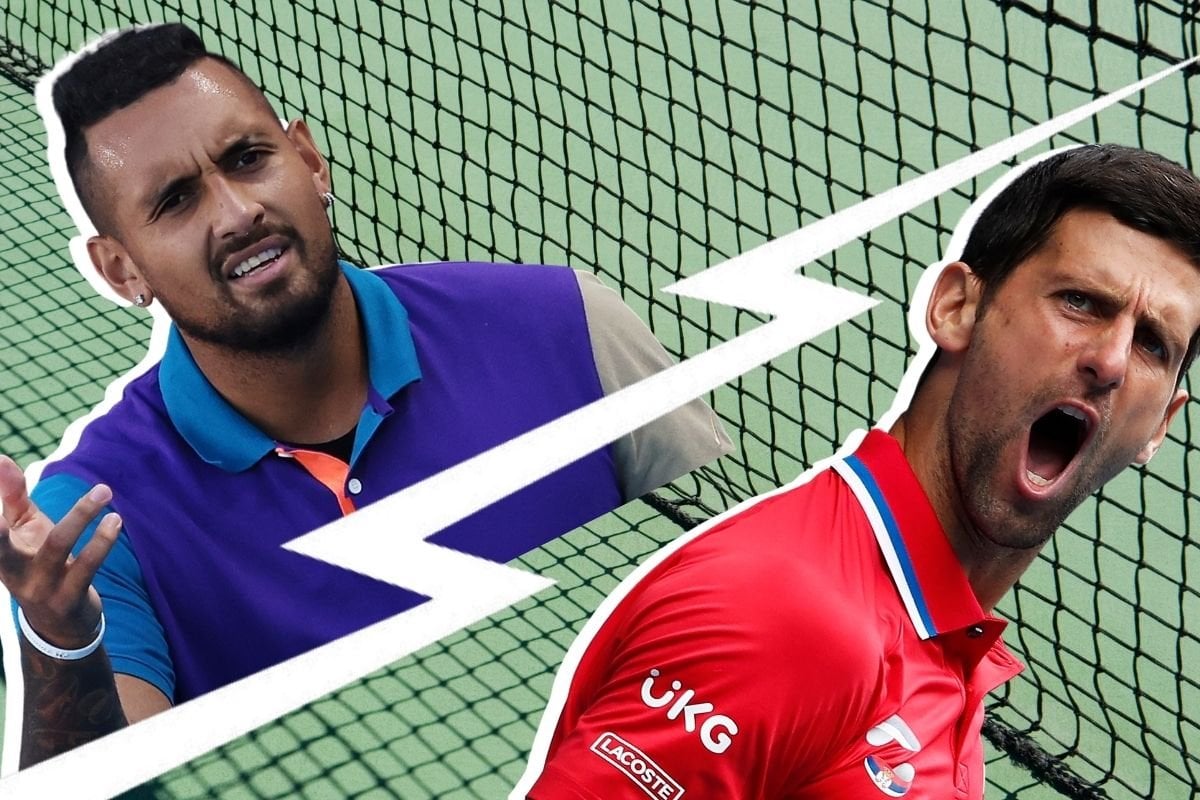 Tennis is back on our TVs and so, dear reader, is the long-running tennis feud between Nick Kyrgios and Novak Djokovic.

Insults are being thrown, surprise midnight commentary has been sprayed, and we're now at a point where the Australian and Serbian are just going tit for tat as the Australian Open gets underway in Melbourne.

The two tennis stars have only actually played each other twice on the court, in back-to-back tournaments in 2017. Kyrgios won both games.

Watch: On Monday, Kyrgios responded to Djokovic's recent comments about him. Post continues after video.

To understand the tension, let's go back to the start. Because boy, a lot has happened since 2019.

It all began with a podcast.

"This whole celebration thing (blowing kisses to the crowd) that he does after matches, it’s like so cringeworthy. It’s very cringeworthy," Kyrgios continued.

The men's world no. 1 initially opted to take the high road when he was inundated with questions relating to Nick Kyrgios’ podcast taunts.

Publicly Djokovic said he "wasn't losing sleep" over the claims, but eagle-eyed fans spotted the Serb 'liking' an Instagram post, which quoted John McEnroe from a BBC Radio interview saying about Kyrgios: "I don’t think he should be out there anymore unless he gives an honest effort."

In June 2019, he told Sportsklub, "What can I say to Nick Kyrgios. I really think he's not really a bad guy. I do not know why he declares all these things, whether he wants to draw attention or some motive is different."

The following month, after being eliminated from Wimbledon, the Australian sent out a subtle jab ahead of Djokovic's match with Roger Federer, tweeting: "Federer please win."

Then footage started doing the rounds on the internet of Kyrgios signing his name over a fan's 'Novak' t-shirt during the Atlanta Open, telling the camera "that's what I think of you" after crossing out Djokovic's name.

In August 2019, Djokovic exploded at the crowd during the US Open, telling them to "shut the f**k up" as he tried to concentrate during a practice session.

In September 2019, Djokovic's coach Goran Ivanisevic weighed in, telling the Telegraph, "It’s bad because I don’t think Novak did anything wrong to him. He decides to pick on Novak for no reason. You can come on the court and do whatever you want, but you need to respect your opponent."

"He speaks a lot about Novak, only he knows the reason. But he should just take care of himself because he should be in the top five, he could win a Grand Slam. He’s never going to win a Grand Slam with the approach he has now," he added.

In January 2020, Kyrgios was spotted in the stands at midnight watching Djokovic play doubles at the ATP Cup - reportedly openly barracking against the Serbian star and sniggering at his every mistake.

When asked if he was disappointed with Kyrgios' late-night visit, a diplomatic Djokovic said: "To be honest, not really. I didn't see him in the stands but then I saw the videos after that [on social media]. I know he's a good buddy with (France's Gael) Monfils and with the French team, so, you know, it's fine."

He did, however, have an ever so slight dig by adding: "And Kyrgios knows how to have fun and how to attract attention, that's for sure."

Later that month, Kyrgios posted on Instagram with American tennis player Tennys Sandgren alongside the caption: "Tennys and I love Novak," which he later deleted.

It made headlines nonetheless as another little swipe to add to the 'feud' tally board.

In April 2020, Kyrgios downed about six glasses of wine and took part in an Instagram live with fellow Aussie tennis player Thanasi Kokkinakis and actually said something sort of nice about his rival.

"I don't actually hate anyone. I can admit that people are different. I don't like some of the things he [Djokovic] does but I don't hate him," he said.

But the niceties didn't last long, because in June 2020, Djokovic spearheaded the disastrous Adria Tour and Kyrgios did not hold back.

From the beginning, the tour was dogged by criticism for even attempting to go ahead in the middle of the global pandemic, but the outrage only escalated when it was clear no one was following COVID safe guidelines.

Kids stood shoulder to shoulder during the opening ceremony, players hugged post-match just like they used to, and there was barely a mask in sight.

Opening ceremony at the Adria Tour in Belgrade. Social distancing: nonexistent. At least some wear masks, sort of. pic.twitter.com/QQyzBtljNG

"We have different circumstances and measures, so it’s very difficult to think of international standards," Djokovic said at the time.

"You can also criticise us and say this is maybe dangerous, but it’s not up to me to make the calls about what is right or wrong for health," he continued.

Then tennis players started testing positive, including Djokovic. Kyrgios was ready and waiting to lead the tennis world's condemnation of the entire event labelling it a "boneheaded decision."

When footage emerged of Djokovic dancing shirtless with several players during the Adria Tour, Kyrgios wrote on Twitter: "Prayers up to all the players that have contracted COVID-19. Don’t @ me for anything I’ve done that has been ‘irresponsible’ or classified as ‘stupidity’ - this takes the cake."

When Austria's Dominic Thiem defended Djokovic against Kyrgios's criticism, accusing the Australian of "a lot of mistakes himself", Kyrgios didn't hold back.

“What are you talking about, Dominic Thiem? Mistakes like smashing rackets? Swearing? Tanking a few matches here or there? Which everyone does?” said Kyrgios

"None of you have the intellectual level to even understand where I’m coming from. I’m trying to hold them accountable.

"This just shows what a joke Dominic Thiem, Alexander Zverev, and Novak Djokovic think this is. Two of them partying like potato’s (sic) during a global pandemic. People losing lives, loved ones and friends, and then Thiem standing up for the ‘mistake’.

Djokovic defended himself against all his critics, telling Serbia's daily Sportski Zurnal they had entered into a "witch-hunt".

Kyrgios responded by posting a video of him winning a point (during a match he won) against the Serbian, with lyrics from the song ‘Mocking It’: “Talk sh*t but I’m doing what I do, you wouldn’t last if I put you in my shoes”.

In August 2020, Djokovic told the New York Times that his intentions for the Adria Tour were "right and correct" and if he had the chance to do the tour again he "would do it again".

“I don't think I've done anything bad to be honest. I do feel sorry for people that were infected," he said. 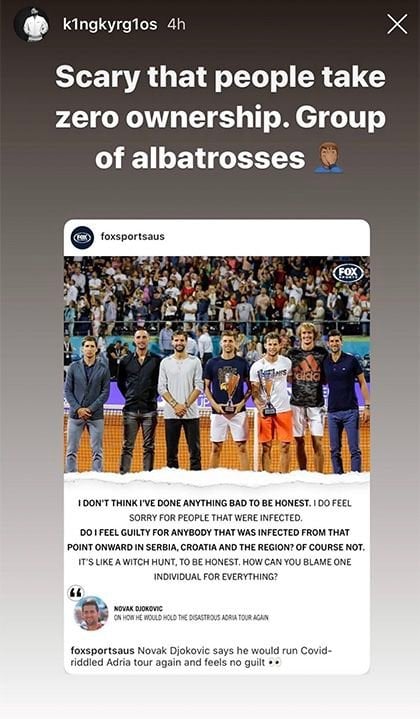 In September 2020, Djokovic was disqualified from the US Open after he hit a ball towards the back of the court and struck a line judge in the throat.

No stranger to controversial on-court moments himself, the Aussie star fired a somewhat sarcastic suggestion in Djokovic’s direction.

"Swap me for jokers incident. ‘Accidentally hitting the ball kid in the throat’ how many years would I be banned for?” Kyrgios asked on Twitter, giving fans the option of answering five, 10 or 20 years.

Swap me for jokers incident. ‘Accidentally hitting the ball kid in the throat’ how many years would I be banned for?

Now that brings us to 2021, and the controversial Australian Open that's just kicked off in Melbourne.

As charter flights started arriving in January full of tennis players and their staff, a COVID-19 scare sent many of them into a mandatory two-week quarantine.

Djokovic issued a list of demands to Tennis Australia boss Craig Tiley, which included fitness material in all rooms, decent food, and relocation of "as many tennis players as possible" to private houses with tennis courts.

The demands were refused, and Kyrgios was first in line to label Djokovic "a tool".

During an interview in January 2021, Kyrgios - who is currently ranked 46 - took another swipe, telling the Herald Sun, "No matter how many majors Novak wins, he will never be the greatest to me. I played against him twice, and if he can't beat me, you are not the greatest of all time."

On Sunday, when asked about Kyrgios' ongoing criticism of him, Djokovic finally bit back.

"I think he's good for the sport," Djokovic told reporters.

"My respect goes to him for the tennis he's playing. I think he's a very talented guy, he's got a big game and he's proven that he has a quality to beat any player in the world.

"Off the court, I don't have much respect for him to be honest. That's where I'll close it. I don't really have any further comments for him and his own comments for me or anything else he's trying to do."

“Off the court, I don’t have much respect for him, to be honest"

Kyrgios responded by calling Djokovic a "strange cat", with the Australian saying he refuses to cop flak from a person who partied with his shirt off during the global COVID-19 pandemic.

"It's a strange one for me," Kyrgios said.

"It actually would make complete sense to me if he was like, 'Look, I don't respect the guy on the court', because I understand if he doesn't agree with some of my antics on the court that I have done in the past.

"But I'm not quite sure how he can't respect me off the court. I feel like I've gone about things extremely well, especially during the pandemic.

"I was driving around delivering food to people during the pandemic. I was extremely careful about what I was doing. I didn't want to spread the virus to anyone.

"Now I'm actually trying to donate meal kits to people that need food. I have my foundation. So it's very strange to me as why he would say he doesn't respect me off the court. I actually do a lot off the court.

"But yeah, he's a very strange cat, Novak is. Heck of a tennis player, but unfortunately someone that's partying with his shirt off during a global pandemic. I don't know if I can take any slack from that man. That's as bad as it gets for me."

Djokovic didn't want to add more fuel to the fire when told of Kyrgios' comments.

"You can read it, but I'm not going to answer to anything," Djokovic said.