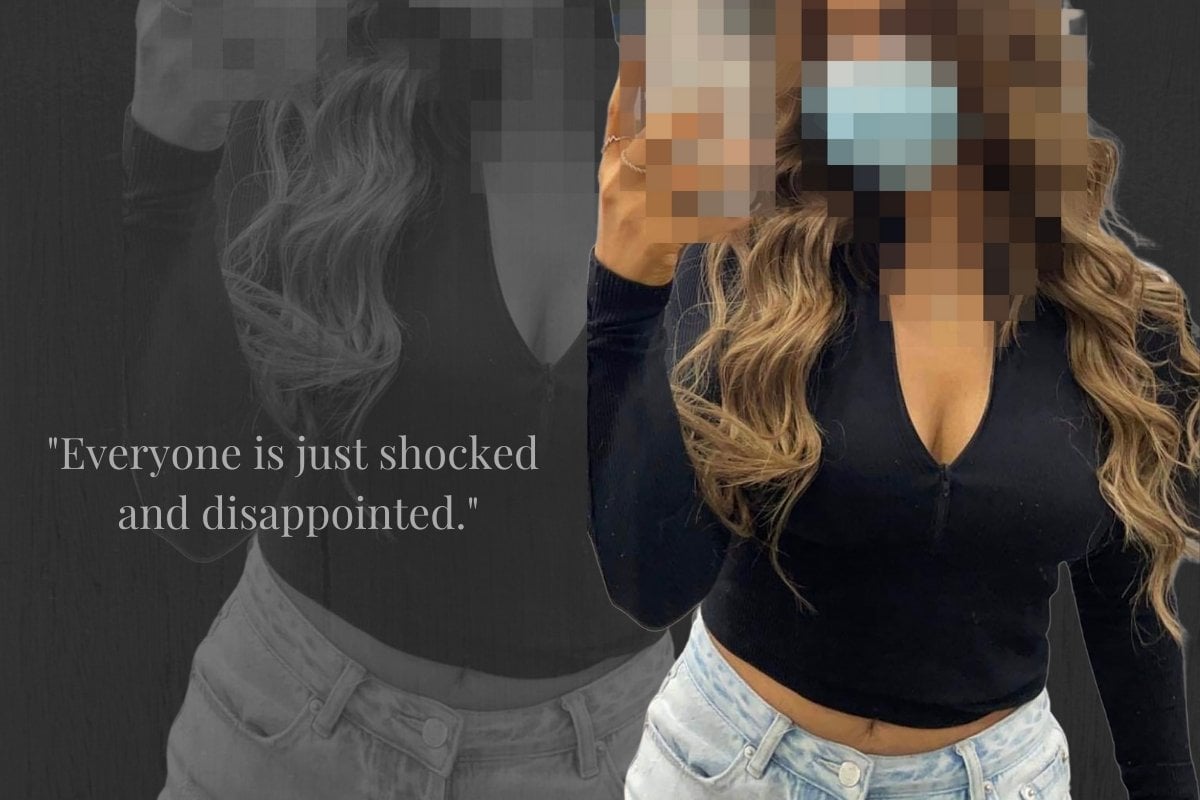 The night the woman pictured above first encountered Nicholas Drummond at a Sydney pub, he called her a "sl**". He told her to "put [her] tits away" and to "f**k off". Hours later, he punched her in the face, knocking her to the ground.

But despite pleading guilty to assault, Nicholas Drummond won't be serving time in prison. His convictions relating to that December 2020 evening were last week erased by a NSW District Court.

See, Drummond, a graduate of Sydney's elite Knox Grammar, assured the court that he was "brought up better", that he "knew better" than his behaviour suggested. "I know violence isn't the answer, especially not towards women," he said.

Drummond's mother assured the court that the 20-year-old was remorseful after his drunken acts of violence. "He was a shattered boy," she said.

And Drummond's barrister assured the court that Drummond had endured a "very difficult" 2020 marked by the death of the family dog, the illness of a relative and a relationship breakdown. "It's appropriate he be given one opportunity ... an exceptional one, admittedly," the barrister said.

Drummond got that one exceptional opportunity.

The incidents considered by the court occurred at the Greengate Hotel in Killara, a leafy suburb in Sydney's upper north shore.

After Drummond lobbed verbal insults at the woman regarding her outfit, she approached him and asked for an apology. The soccer coach and state-league player told her to "f**k off".

The pair coincidentally encountered each other later that night at the Orchard Hotel in nearby Chatswood, where she approached and photographed Drummond, sparking a melee over her phone.

Staff ejected Drummond, who then took his frustration out on a man who was queued to enter the bar, punching the stranger in the back of the head.

When approached again by the young woman as he walked to the nearby train station, Drummond punched her in the face, knocking her to the ground and causing multiple injuries.

He also stomped on her phone, destroying it.

Listen to the latest episode of The Quicky, Mamamia's daily news podcast. Post continues after podcast.

The judge noted the incidents were sparked by Drummond's "loose tongue and loose thoughts" on a background of excessive alcohol use.

"[Drummond made] a lewd and completely inappropriate remark towards someone he didn't know but whose dress might have been perceived by a former student of Knox to be provocative," Judge Richard Sutherland said.

(The outfit the woman was wearing is pictured above.)

Judge Sutherland ultimately accepted Drummond's offending was an aberration and that it wasn't "necessary" for convictions to be recorded.

The judge left in place a conditional release order, mandating good behaviour for 14 months and told Drummond to thank his family and "your lucky stars" for the outcome.

"Everyone is shocked and disappointed."

NSW Attorney-General Mark Speakman noted in a statement that the way someone is dressed "is no excuse for violence", but that judicial officers have the option to record no conviction in cases they find appropriate.

"This is not a finding the offender is innocent and, unless unusual circumstances apply, a non-conviction outcome will not be repeated if there are further offences," he added.

Still, the ruling has raised many eyebrows, including those of consent education reform advocate Chanel Contos.

"It tells us that privilege and entitlement are not only the reason gender-based violence occurs but also why no accountability is held," Contos said.

"Could we expect the same result if that was a 20-year-old from a low socio-economic status who didn't have Nicholas's barrister?"

The woman at the centre of the case, who will remain unnamed, said the response has been overwhelming.

"All the writers and campaigners who have shown an overwhelming amount of support, it made me feel that some sort of justice has been served as it was evident I wasn't alone," she said.

"Everyone is just shocked and disappointed by [the outcome of the case].

"Everyone has the same view."

Reply
Upvote
Over 25% of common assault cases have no conviction (more than 2000 in 2020 from over 7000 cases). He has a good behaviour bond for 14 months which is in line with the penalty for a first time offender. Should he have a bigger punishment because he went to Knox? He went for no conviction because then he can keep on working. There has to come a time when it isn't okay to pin all of the angst and guilt onto a 20 year old. His head has been put on a stake and for someone who has admitted their guilt, admitted they did the wrong thing, went to therapy and has shown remorse some people need to either work to have the law changed or report on all 2000 cases that didn't get a conviction.
K
Kid 8 months ago

Reply
Upvote
Don't we all deserve a second chance. Can we see the other side of the story?
C
cat 8 months ago

Reply
Upvote
@Kid  Would you be happy to have him look after your child?
L
laura__palmer 7 months ago