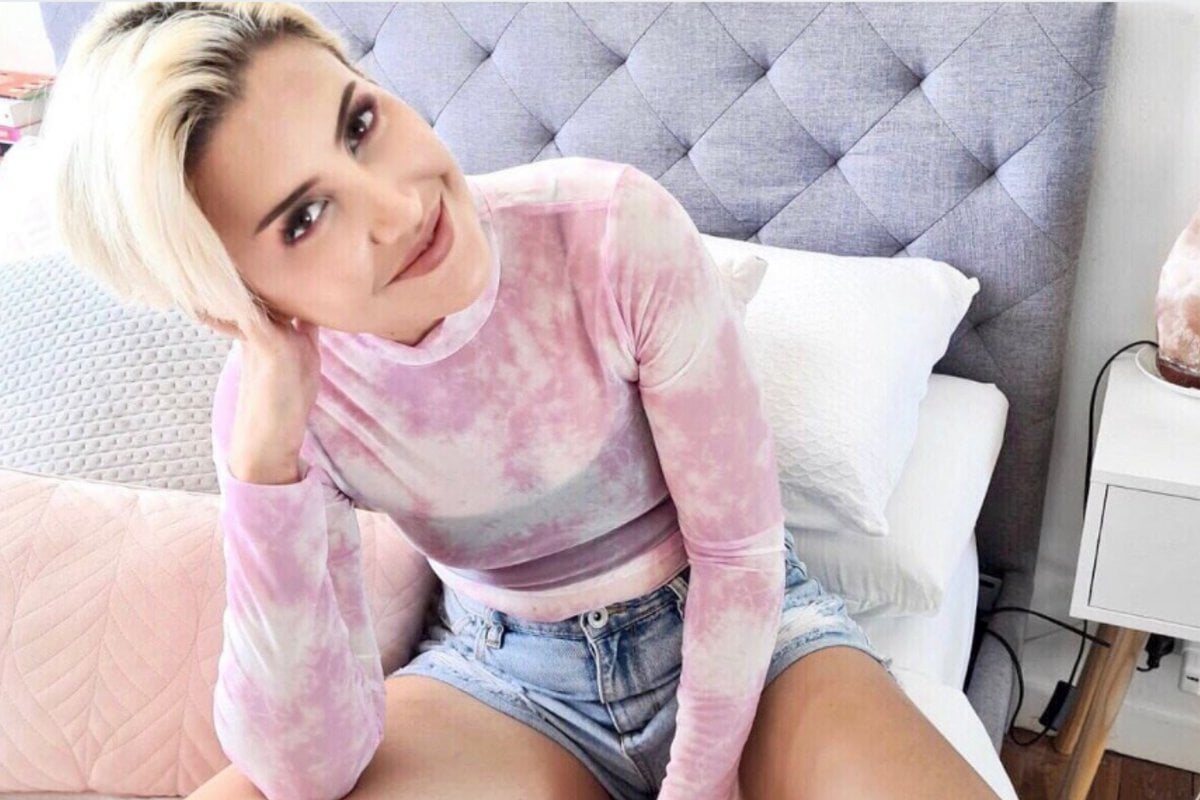 And that's because Nadia has been explicit about her sex life across the internet for many years.

She's a sex writer, sex reviewer, sex sharer. She's made a career out of talking about having sex with men. She's the Carrie Bradshaw of Australia, but with the sex life of Samantha Jones.

Which is why when she made an announcement last week that she is gay, it came as a surprise to many.

"I know this is going to be hard for a lot of you to understand - I have spent so much of my career writing about having sex with men and talking about it, making videos about giving head, you know?"

Watch the star signs as they navigate virtual dating. Post continues after video.

Nadia knows that this news has been a long time coming, but admits that an unhealthy combination of unresolved issues with her father and a lack of representation of the gay community in mainstream media led to her confusion.

"I grew up in a Catholic home and I was raised on a pretty steady diet of Disney movies that showed me that the goal in life was to find a man to love me, marry me and ride off into the sunset with. When I was growing up, there wasn't really representation around me of gay relationships. I only saw straight people in the media."

This lack of diversity led Nadia to suppress, reject and on some occasions, be revolted by her own feelings.

"When I started having sexual or romantic feelings towards women, I thought that there was something wrong with me. Or that I was a pervert or something."

Later on in life, Nadia while continuing to have sex with men, also allowed some women into her sex life.

"I've kissed women. I've been on the odd date with women. I've had sex with women. But, I guess this is showing the shame I had... I would never tell anyone about these encounters. Which is ironic because I share everything about my sex life. My entire sex life is on the internet."

Then, three and a half years into her monogamous relationship with her now ex boyfriend, Kai, she suggested that they open things up, to allow her to explore sex with other women.

"I said that I wanted to have physical interactions with other women. He was actually pretty relieved that it was just women. I think both of us saw it as not being a threat to our relationship because two women, in what we get taught, can never be as legitimate as a man and a woman. It's just two women being sexy and playing around, and being hot."

And this was the narrative Nadia would tell herself while out to dinner and drinks with various women. All until she stopped wanting to read that fairytale.

"When I was going on dates with women, even though I was telling myself it was just because I was sexually attracted to them and we were just going to hook up, I found myself feeling more...

I found myself imagining what a future would be like with a woman."

"I never let myself imagine that before," she said.

Reflecting on her past relationships with the men, Nadia recognised a pattern.

"All my boyfriends kind of looked the same. They all kind of looked like my dad. As messed up as that sounds. But I think that's why all of these relationships were so triggering to me. They were all about trying to get that love that I had never been given."

"I realised that all the relationships I've had with men have been about trying to replace the father that I never fully had."

Along with a confusing motive, Nadia found that her relationships resulted in her harming herself - and that ranged from a loss of self to multiple hospital trips.

"The relationships have followed a pattern of: extreme emotions, highs and lows, obsession around thinking this man was going to leave me (even though none of them gave me that indication) - and I thought that was love. That love was all-consuming. That love was agony. Love was when you'd hurt yourself so that they would stay with you."

"I spent a lot of time in private hurting myself. And I never understood why I was doing it. I could never feel fulfilled in relationships. It didn't make sense that I could have all of these things, and still be in and out of hospitals hurting myself."

Looking back, Nadia can clearly see that she was never attracted to the guys she was with, but instead she was fuelled by their desire of her. Their adoration of her.

"None of these relationships started with me instantly going, 'WOW. I am super attracted to this man.' Instead, every single one of them started with me getting a clear indication from the guy that he was interested in me and desired me. And that was what I wanted my entire life."

"I'm supposed to be this empowered feminist, but I've just admitted that I've spent the whole of my life desperately chasing male attention."

In fact, ironically for a sex writer, she never craved sex with a man. It was the validation that came with it.

Shortly before her announcement, Nadia ended up relationship with Kai after four years together, and the pair remain friends.

Nadia made her announcement on both her YouTube and Instagram channels, where she shares a lot of her work. As she's used to copping a lot of criticism on those platforms, she knew she had to mentally prepare herself to go public with the news.

"It's been a long process giving myself the permission to be gay. I knew people would say, 'You can't say you're gay - you've had sex with too many men!' But some people don't come out until after they've been married for 20 years and have three kids. Only then are they ready."

And Nadia is ready. She's ready to live her truth and be the person she was always meant to be: A gay woman, who knows herself, her worth and that true love definitely doesn't need to hurt.

"I never want to have sex with another man again. And I feel that in my heart. A switch has been flicked on, and I'm finally seeing everything in colour."