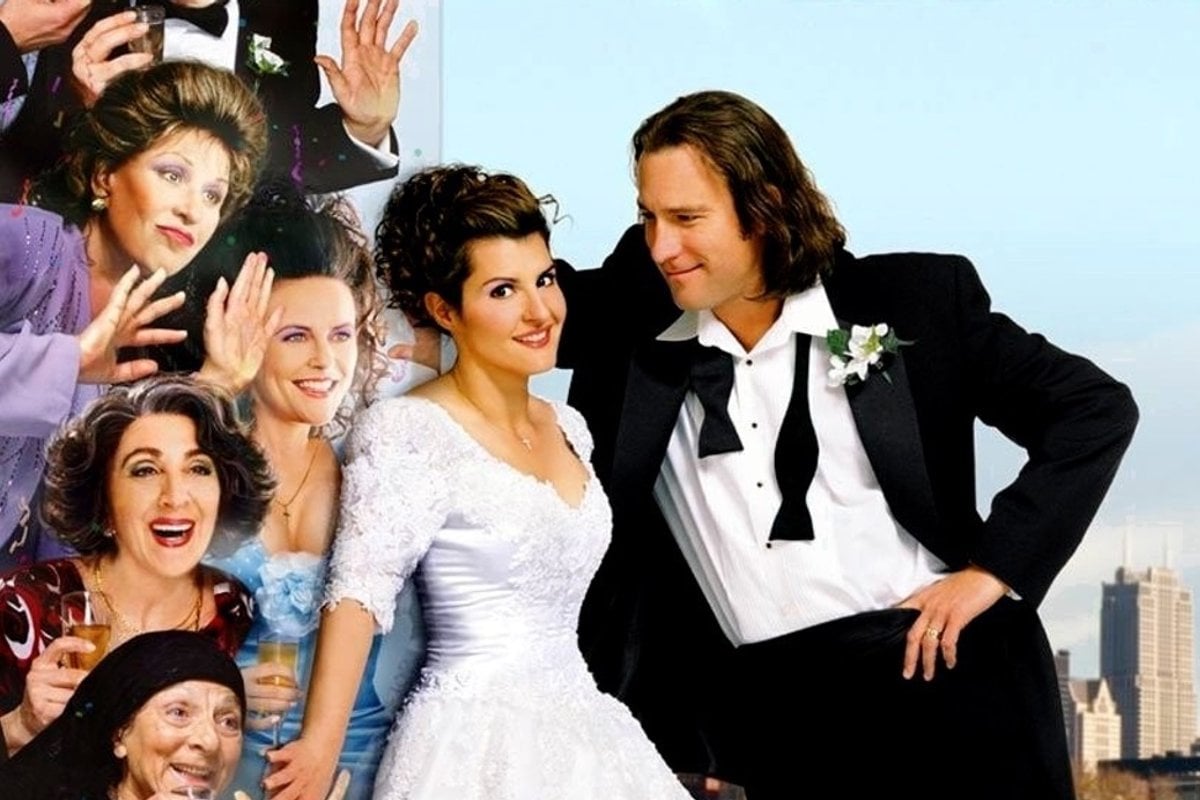 It's been 20 years since My Big Fat Greek Wedding premiered and quickly became the highest-grossing romantic comedy of all time.

The film was based on writer and lead actress Nia Vardalos' own big Greek family, and it's safe to say the story resonated with audiences far and wide.

So, in honour of the iconic film's 20th anniversary, we thought we'd take a look back at the five things you didn't know about My Big Fat Greek Wedding.

Watch the trailer for My Big Fat Greek Wedding. Post continues below.

It's hard to believe that My Big Fat Greek Wedding wasn't an immediate hit with Hollywood agents, but when Nia Vardalos first pitched the film, she was actually fired.

"When agents/managers said my script wasn’t good and actors shouldn’t write, I recall wondering why they were angry. They fired me. So, I changed the material into a solo stage show," she wrote in a Twitter thread this week.

#MyBigFatGreekWedding is 20 today. 🎂 When agents/managers said my script wasn’t good and actors shouldn’t write, I recall wondering why they were angry. They fired me. So, I changed the material into a solo stage show. @RitaWilson saw the play and said, ‘this should be a

"Rita Wilson saw the play and said, 'This should be a movie.' I handed her my screenplay, and this creator and producer got the film made with me as the lead. We premiered in 106 theatres, expanded to more, and ran for over a year. People full of love loved it, and again some were snide, hateful."

"I was nominated for everything, went on to write and act in films that make people happy, employed hundreds of people, wrote and performed a New York Times Critics Pick play which has been licensed hundreds of times, and wrote a bestselling book whose proceeds get children adopted.

"You can’t make anyone embrace change, marginalised voices, or new ideas. So love yourself. And write your story."

John Corbett was offered the role of Ian Miller at a hotel bar.

Yep, it turns out Nia Vardalos' on-screen husband landed the role by coincidence when he ran into writer and producer Gary Goetzman in a hotel bar.

"I thought [John Corbett] was perfect [for the role]. But he wasn't available," Vardalos told ABC News.

"So we were about to start filming My Big Fat Greek Wedding, and I was in the bar of the hotel with Gary Goetzman, and we didn't have Ian Miller.

Then, by some stroke of a miracle, John Corbett walked in.

"In walks John Corbett, right into the bar. He's in the same bar that we're in at the same hotel in Toronto," Vardalos shared.

Goetzman and Vardalos overheard Corbett telling the bartender that he'd just read a script for My Big Fat Greek Wedding.

Within 10 minutes, Goetzman found out that not only was Corbett interested in the role, but he was actually available for filming after all.

He offered Corbett the role, and the rest is history!

Much of the movie was based on real quotes Nia Vardalos heard from her family.

If Big Fat Greek Wedding seemed particularly authentic, that would be because Vardalos took plenty of inspiration from her own family when writing the movie.

"[My mother] gave me a line for the movie the other day," she told ScreenTalk Producer Robin Rea when she was writing the film.

"I have the father in the movie say, 'I am the head of this house' and the scene as it exists now is that the mother turns to the daughter and gives a 'yeah, right' look afterwards. But my mother suggested I have the mother character reply, 'But the woman is the neck and she can turn the head any way she wants'."

She spoke about it more in an interview with ABC News.

"When I started to write My Big Fat Greek Wedding, all I did was write down everything that had ever happened to me.

"I've grown up basically hearing stuff that, at the time, you accept as truth, but then later, you go, 'What?' Like, 'Greek women. We might be lambs in the kitchen, but we're tigers in the bedroom,' is something that my mother said to me while we were making chicken soup.

"So I threw up in my mouth. And then I wrote it down."

It prompted a spin-off TV show.

But it just didn't work quite the same...

The CBS series My Big Fat Greek Life brought the whole cast back together (aside from John Corbett) for a seven-episode series in 2003, but it seemed nothing could top the hit film.

Listen to this episode of What I Eat When featuring My Big Fat Greek Wedding actor, Gia Carides. Post continues after podcast.

Writer and lead actress Nia Vardalos asked her co-star John Corbett for a kiss prior to filming their kissing scene as she wanted to "get it over with".

Speaking to 20/20, she shared that the pair had a kiss off-set a few hours before filming the official take.

So, she stopped Corbett on his way out of his trailer.

"I said, 'I'm really nervous about everyone seeing it, and could you just kiss me right now and let's just get it over with?'

It wasn't until years later that the pair found out they'd been caught in the act.

"We found out years later that the hair artist on the movie had come out of the makeup trailer at that moment, seen us kissing, and went, 'Oh, they're having an affair'."

Reply
Upvote
2 upvotes
A favourite of mine. I remember going to the movies to watch it and it just smiling through the whole thing. No matter how many times I’ve seen it, if it’s on the telly, I will watch it again. Classic, relatable and oh so quotable. The bibopsy 🤣🤣