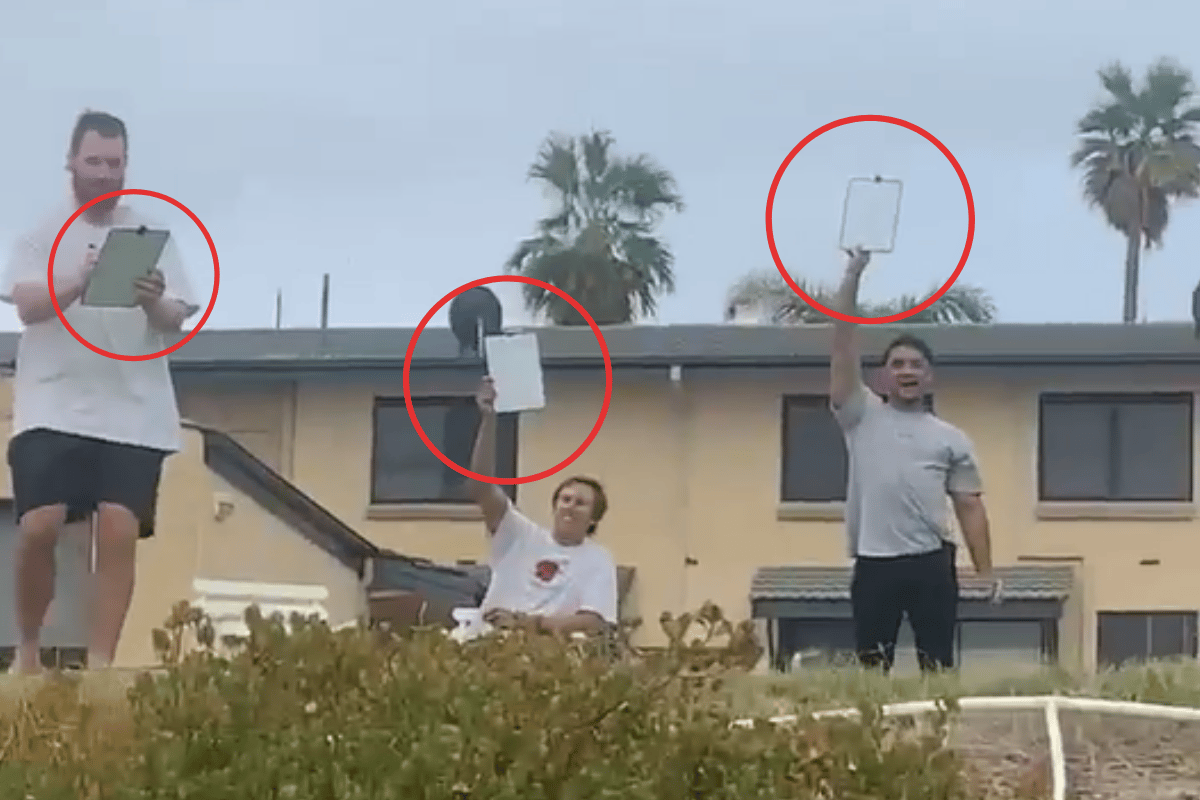 I was on my phone, scrolling away blissfully, when I came across a video. A video that made my skin crawl.

I felt angry. I felt hurt for the woman who had filmed the video. But I also felt defeated.

The video shows three young men at a popular beach in Scarborough, Perth on Saturday. Each of the men are holding whiteboards, readily scribbling down numbers when women walk past them. And when satisfied with their choice, they thrust the whiteboard into the air and declare that the woman currently walking past them is representative of that number out of ten.

Are men really still rating women? It appears so.

Elizabeth, the woman who filmed the video - who must be credited for her courage and determination - is given a 'rating' both verbally by the men and via their scorecards.

She calls out to them and cries: "Do you know how uncomfortable that makes people feel? Do your workplaces and families mind sexists?"

You can watch the video being discussed here. Post continues below.

For those who have seen the video or are only hearing about it as you read this article, I can imagine you would be feeling pretty disgusted by this. There has been an outpouring of criticism for the actions of these men, and rightly so.

And yet, examples like this one are not isolated at all.

Just last year, boys at a Northern Beaches Anglican school took part in a "build a b*tch" classroom activity, where the male students were told by a teacher to use a points system to choose the qualities they wanted in an "ideal girl".

More points were allocated for girls who were "good looking/attractive", "virgins", "physically fit" and had "good pedigree", just to name a few. And yes, you read that correctly: pedigree. As if picking a girl to be your partner is at all synonymous with a dog.

What was at the lower end of the points system you may ask? "Sincerity", "generosity", "cares for the world", "socially competent" and "similar beliefs". Because of course a woman's best features are her looks, not her brains.

We have also seen the archaic practice of rating play out on national television on Married At First Sight.

Each season we have seen the couples rank one another as part of a 'relationship experiment' set by the 'experts'. And every year it involves a woman being picked apart, solely based on her looks.

As Bryce so bluntly told Melissa when he ranked her as the "fourth most attractive" among the rest of the wives. "I've always gone for the blonde hair, blue eyes, tan kinda girl. And usually tall. I can't say 100 per cent I'd come up to you in a bar and buy you a drink. When I first saw you I thought, 'Not my type'. But, I thought, she's not... ugly?"

Yes, the women also rank their male partners in this completely aimless task on MAFS. But the point is that men have been doing it without a TV show for years.

And that is because attractive bias exists, predominantly against women. It can be found in workplaces, friendship circles, the dating world, and countless other settings.

Data has even shown that women who are considered 'attractive' or 'rank high' on someone's silly ten-point scale are more likely to get a job, secure a job interview, promotion or work-related opportunity.

In one study, researchers sent out more than 10,000 resumes, using the exact same resume template and only changing the names and photo. The average callback rate from these resumes was 54 per cent for 'attractive women'. For women who did not meet society's harsh expectations of perfection, the callback rate was seven per cent.

In my personal circle, I've seen just how detrimental rating can be.

In the early years of primary school, a group of boys made a ratings system based on which girls they deemed "the hottest". I didn't make the cut.

During my teenage years, a close friend and her sister were compared against one another by a middle-aged man at a bar, the man saying to my friend: "Your sister is a ten out of ten" while looking her up and down and licking his lips. "Don't get me wrong, you're a looker too but definitely not a ten out of ten. You just don't have her body."

In university, I heard countless stories of fellow young women being rated by preppy privileged men in certain elite colleges.

Even in prepping for this article, my mother told me that while she was at work, one of her colleagues once revealed he and "the boys" had made a scoring system, rating each of their female colleagues on "who had the best arse".

There is a mental toll that occurs when you experience something like this.

Of course on a surface level, we can register that these ratings given by sexist men should not hold any weight or keep us up at night. Their opinion is bulls**t. But deep down, you can be made to feel devalued. Less than. And that is never okay.

For those who walked past those three men on that Perth beach on the weekend, chances are, the number assigned to them will be stuck in their minds. Not because the number is true or valid. It isn't. But because it ignited a visceral response, whether it be anger, frustration, disappointment or shame.

It is so irritating to see these sorts of examples still happening in 2022.

Surely, we as a collective across the gender spectrum, have done enough to ensure men finally get the message. For years now, women have been calling for change. And change has happened. Because in the past, there is every chance that this video wouldn't have gone viral for all the wrong reasons.

But to be completely honest, it can feel a little exhausting and quite demoralising seeing this sort of behaviour play out over and over again - not just on a macro-level, but in our everyday lives too.

What Elizabeth did in calling out their inappropriate behaviour was incredible. But judging by the response she received, it's not the condemnation from women that will change these three men's minds. It's their peers.

As Elizabeth told the ABC, "Men like these who can yell at women and treat them like trash probably aren't going to get the message from women. It's so important for other men to raise this conversation with their friends and call out bad behaviour when they see it."

It's no longer up to us to make a difference. It's down to men.

I am more than what I look like, and it's time that men like these three realise that too.

Reply
Upvote
4 upvotes
Truly revolting.
I love that this lady had the guts to stop and challenge these idiotic little boys and to film their behaviour. Not an easy thing to do.
L
laura__palmer 2 months ago

Reply
Upvote
1 upvotes
@jkluwer The only thing better would be if another man challenged them and filmed them. But I give her all the points. It's so brave of her.
C
chrissyinthemiddle 2 months ago

Reply
Upvote
2 upvotes
@laura__palmer The cops turning up and charging them for being a public nuisance would be ideal.
A
apexpredator 2 months ago

Reply
Upvote
1 upvotes
@apexpredator You know the answer to that. But this isn’t merely a case of ‘judging’ is it? These guys set out to behave in an overtly offensive manner by deliberately insulting strangers in a public place.
E
emwa 2 months ago