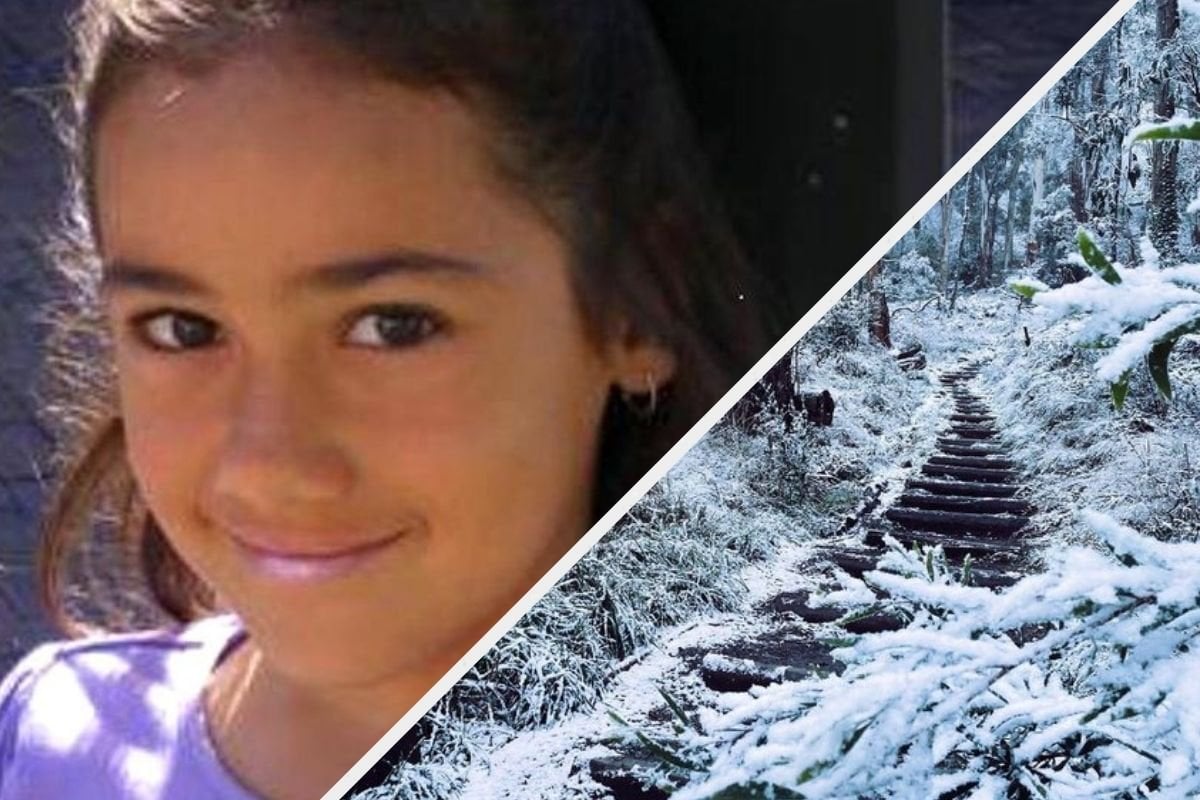 Victorian health authorities have held an emergency meeting with their Queensland and NSW counterparts over a woman's positive case.

The woman and her husband left Melbourne while it was in lockdown and tested positive at the end of her road trip through NSW and into Queensland.

Separately, three people were caught flying into New Zealand last week, having also left Melbourne during lockdown and trying to enter the country via Sydney.

The trio, understood to be a family who planned to attend a funeral, are now in quarantine after they were caught on arrival in Auckland.

While those three travellers have tested negative so far, the woman's positive test on Wednesday has put regional centres in NSW and Queensland on alert.

NSW Health was advised by Queensland Health that two further venues of concern in NSW have been identified as part of ongoing investigations into a #COVID19 case reported earlier today. pic.twitter.com/O4dVEFIjqy

Queensland Health is issuing a contact tracing alert for parts of Sunshine Coast, Goondiwindi and Toowoomba regions, in relation to a new #COVID19 case in the community.

For a full list of locations and times, visit https://t.co/rujm8F3qL4 pic.twitter.com/A7EAqvEccC

The northern states' scare and news of the Auckland incident came as Melbourne had confirmation its two-week lockdown was on the verge of ending.

On Wednesday, the state government announced Melbourne's extended "circuit breaker" lockdown will cease at 11.59pm on Thursday, meaning people will be free to leave home for any reason. But Melburnians will need to remain within 25km of their homes, unless working or studying, care giving or getting a COVID-19 vaccine.

Victoria reported just one new local case on Wednesday and it is a linked infection. There were three new cases in hotel quarantine.

Setting the conditions for a travel bubble will be on the agenda for prime ministerial talks between Scott Morrison and Lee Hsien Loong in Singapore on Thursday.

Singapore will be the first stop for the prime minister on his way to Cornwall for the G7 leaders' summit, as well as trade and security talks in London and Paris.

Australia already has a COVID-safe travel agreement with New Zealand but a Singapore deal would deliver a major confidence boost for the tourism, education and corporate sectors.

Setting the conditions for a travel bubble will be on the agenda for prime ministerial talks between Scott Morrison and Lee Hsien Loong in Singapore ahead of the G7 summit. https://t.co/CZyQZBS8kU

It is understood the Singapore government has submitted a number of proposals to Australia, as far back as October last year.

Both countries have rolled out a certificate system to verify who has been vaccinated for coronavirus, which could make a safe travel corridor easier to establish.

Australian officials are hopeful some progress can be made during the leader talks on setting out the preconditions for a travel bubble.

Some countries are setting up travel corridors on the basis of 50 to 60 per cent vaccination rates.

A three-year-old asylum seeker being treated for a blood infection at a Perth hospital could be sent back to detention on Christmas Island within days, family supporters say.

Tharnicaa is receiving care at Perth Children's Hospital after being evacuated from the island with her mother Priya Murugappan earlier this week.

Her potentially deadly blood infection has been linked by supporters to untreated pneumonia.

The Home to Bilo group on Wednesday said Tharnicaa's temperature had improved and Priya was reporting her to be "brighter and better" but still not eating.

Could there be movement afoot for the Tamil family detained on Christmas Island?@CroweDM, in the @smh, is reporting this morning Lib MP's are (privately) pushing for the family to return to Biloela.

Niki Savva, in the @australian, is urging the PM to 'man up'. #auspol pic.twitter.com/tnxGyGi2VF

"Doctors are awaiting results from blood taken yesterday for tests, which will take two days to come back," the group said in a statement.

"Pending those results, Priya believes that she and Tharni could be sent back to Christmas Island by the end of this week, possibly as early as Friday. There has been no indication from Australian Border Force if this will be the case."

The Tamil family has been on Christmas Island, far off the West Australian coast, for two years after being removed from their home in Biloela, Queensland.

They have pleaded to be allowed to remain in Australia.

Federal authorities have been threatening to send them back to Sri Lanka, despite the family's fears they would be targeted.

The Murugappan family's lawyer Carina Ford on Wednesday said they had had no communication with the federal government about the prospect of being sent to the US or New Zealand, amid suggestions they were likely destinations.

There was a possibility the foster father who murdered Gold Coast schoolgirl Tiahleigh Palmer sexually abused her before her death, an inquest has been told.

Convicted sex offender Rick Thorburn is serving a life sentence for the murder of the 12-year-old on October 29, 2015.

Circumstantial evidence, including previous sexual offending and alleged comments made by Thorburn about his foster daughter, gave rise to the possibility, the court was told.

However, his lawyer Matthew Hickey said it was unnecessary to "venture into that particular territory" given the evidence permits "nothing more than a possibility".

Tiahleigh Palmer inquest ends with coroner being asked to consider whether she was sexually abused by killer https://t.co/jiMw0SXU5x

Mr Hickey said there was also no evidence Tiahleigh was strangled, only that she was smothered, and rejected suggestions Thorburn was remorseless.

"The man sat in the box, he cried when explaining the sorrow that he felt about the thing that he quite candidly conceded he had done, he pleaded guilty to the crime," he said on Wednesday.

Thorburn sobbed while reading a one-page statement - he says was written about four years ago - in the Coroner's Court sitting in Brisbane on Tuesday.

He also told the inquest he was "coerced into pleading guilty" earlier to multiple charges of sexual assault for offences unrelated to Tiahleigh.

Tiahleigh's body - naked except for underpants - was badly decomposed when found by three fishermen on the banks of the Pimpama River on November 5, 2015.

Authorities haven't been able to determine how she died.

Members of the Thorburn family were convicted of being part of the crime - Rick Thorburn for the murder, Trent for incest, and Julene and Joshua for being part of an elaborate cover-up.

Inquest findings are expected to be handed down next week.

Winter has officially arrived for much of eastern Australia, with an icy blast bringing widespread snowfall and sending temperatures plummeting.

In NSW, the mercury is expected to dip more than 10 degrees below average for this time of year in some places and come close to breaking minimum temperature records for June.

Significant snowfall is expected across the state, including in the Northern Tablelands for the first time in almost six years.

"We're also going to see fairly widespread snowfall across the ranges all the way up towards the Queensland border," the Bureau of Meteorology's Gabrielle Woodhouse told reporters on Wednesday.

Snow has already begun to fall in regional NSW, including in Orange in the state's Central West and Oberon in the Central Tablelands.

❄️The first significant cold outbreak of winter is settling in over southeast Australia. The more intense cold air will be over #NSW & #snow has fallen in #OrangeNSW, #Oberon & #Crookwell. Sleet is possible down to as low as 500m, including for #Canberra. https://t.co/U0VHzpUW3p pic.twitter.com/MWKdWibr0a

Up to half-a-metre is expected to blanket the state's alpine regions.

Snow is also likely in the Sunshine State, with temperatures in Queensland dropping up to 10 degrees below seasonal averages as well.

The Granite Belt may be treated to a sprinkling of snow on Wednesday and Thursday on peaks in the Stanthorpe region.

Victoria will also be blasted by the cold weather, but is facing damaging winds and potential flooding as well. Wind gusts of up to 120km an hour are expected in some places and blizzard conditions are possible around the alpine regions today and tomorrow.

Harry and Meghan clash with BBC over story.

The Duke and Duchess of Sussex have clashed with the BBC over the version of events that led to the naming of their daughter.

Harry and Meghan's lawyers have written to the corporation after a BBC story claimed the Queen had not been asked about naming their baby Lilibet, which was the monarch's childhood family nickname.

It has been widely reported that Harry and Meghan did consult with the Queen before the name of their baby, who was born in California on Friday, was announced.

But an article on the BBC's website claimed palace sources had said the Duke and Duchess did not ask the Queen about naming their daughter Lilibet.

The Times newspaper reported the couple's lawyers Schillings have sent a letter to the BBC warning the story is "false and defamatory".

The story by one of the BBC's royal correspondents remains on the corporation's website.

- The White House has dropped Trump-era executive orders that attempted to ban the popular apps TikTok and WeChat. The Biden administration will instead conduct its own review at identifying national security risks with the software.

- British Airways and Ryanair are being investigated over whether they broke the law by not offering refunds to customers facing cancellations due to COVID-19.