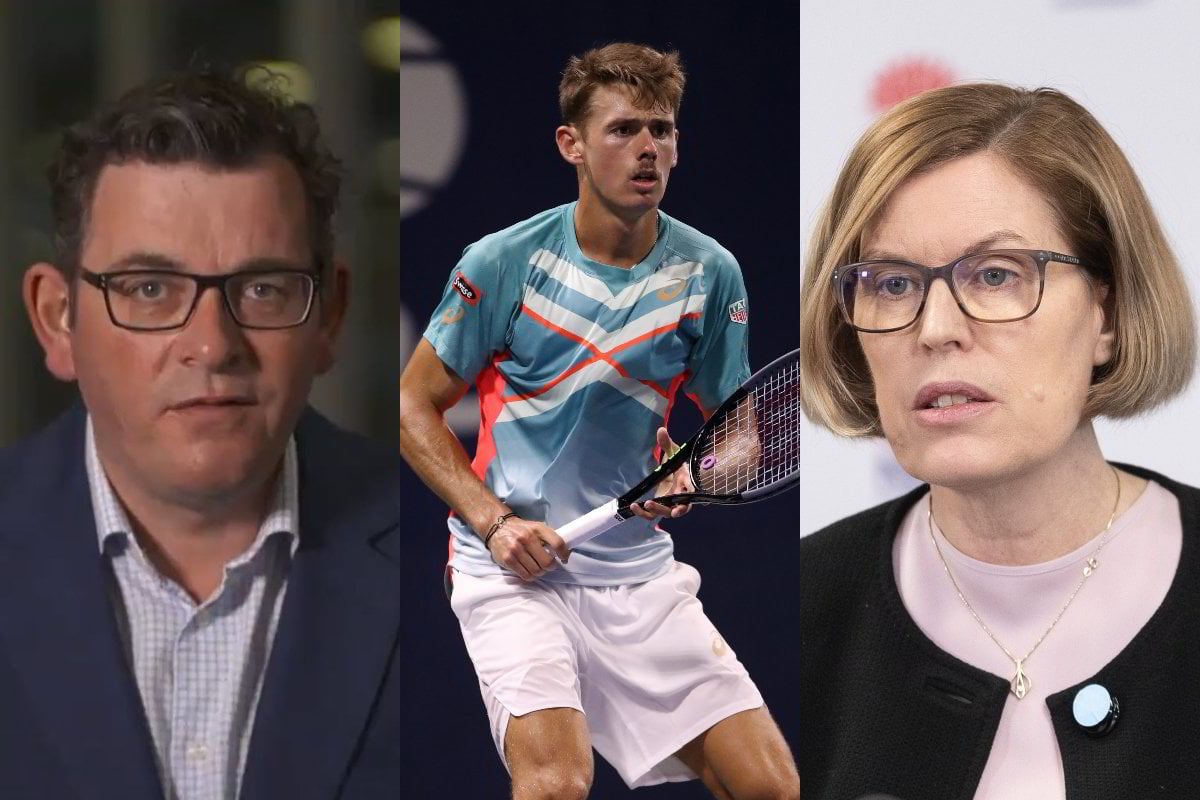 The Victorian government went on a media blitz on Monday to staunchly defend its "safe and steady" pathway out of the state's second wave, which is likely to keep Melbourne under strict lockdown until the end of October.

Victoria recorded 41 new cases on Monday, its lowest daily figure since June 26, while NSW was back in single digits at four.

“Let me be as frank as I can be. Politics has never mattered less to me. Leadership is not about doing what's popular, it's about doing what's right.” - Victorian Premier @DanielAndrewsMP. #abc730 @mjrowland68 #coronavirus #vicpol #auspol pic.twitter.com/77kaA6p1lK

But Mr Andrews dismissed the comparisons, noting NSW had not experienced the same level of community transmission as Victoria.

"That's not a point of pride, that's just a fact," he told reporters.

"I've seen this commentary that under our settings, they'd be in lockdown — no they wouldn't, because they've not had the community transmission that we've had.

The Australian Small Business and Family Enterprise Ombudsman Kate Carnell called on the state government to cover the costs of small business closures.

Meanwhile, Business Council of Australia chief executive Jennifer Westacott is demanding the release of modelling that underpins the roadmap.

Mr Andrews said Victoria couldn't afford to bounce in and out of lockdown for the rest of 2020 and potentially all of 2021, but flagged business support was on the way.

Victorian chief health officer Brett Sutton said there would be no change to the September 28 milestone, when some Melbourne workplaces and schools will reopen if the 14-day case average drops below 50.

But other key dates for the potential easing of restrictions on October 26 and November 23 could be brought forward if the data is close to prescribed thresholds.

Regional Victoria, meanwhile, is on a different timetable and will be able to move to the 'third step' of restrictions soon.

A further nine coronavirus deaths on Monday took the state toll to 675 and the national figure to 762.

Health authorities are working to stem the impacts of a coronavirus cluster emerging at two Sydney public hospitals, with more than a hundred workers in isolation waiting on test results.

The three healthcare workers were diagnosed during investigations into an emergency department doctor, reported on Saturday, who worked at the two hospitals while infectious.

Another case, a visitor to a hospital emergency department where the doctor worked or sought treatment, will be included in Tuesday's numbers, taking the cluster to five.

Patients considered close contacts and all staff at Concord and Liverpool EDs at the same times as the positive cases are being isolated and tested.

The three newly reported health workers say they had no symptoms while at work and also wore personal protective equipment while caring for patients.

Queensland is also working to stop a growing hospital cluster, with a total of five cases connected to Ipswich Hospital.

More than 200 staff at the hospital are now in quarantine, but it is still operational.

Meanwhile, NSW Premier Gladys Berejiklian on Monday confirmed school formals and graduations would be allowed to go ahead in term 4, despite a number of outbreaks in schools in recent months.

SA unlikely to move on borders this week.

South Australia will look for 14 days of no community transmission in NSW before lifting COVID-19 border restrictions for people travelling from that state.

Premier Steven Marshall says while the number of cases in NSW is coming down, the headline figure is not critical in terms of lifting the existing quarantine requirements.

He says local health officials are more interested in where those cases have occurred and in what circumstances.

"The top-line number, while interesting, doesn't really give a picture of the risk for South Australia," he said.

The state's transition committee will consider the border question when it meets again on Tuesday but the premier says he doesn't expect there will be a change in regard to NSW or the ACT this week.

There were no new coronavirus cases reported in SA on Monday, leaving the total since the start of the pandemic at 464.

The state does not have any active infections.

A Sydney man who shot dead his son and daughter at their home before himself had a 30-year history of domestic violence, an inquest has heard.

Jennifer, 13, and Jack, 15, had never told their estranged father of their new home before he followed his daughter on her way home from school and shot them both dead in West Pennant Hills in July 2018.

John Edwards then drove to his Normanhurst home and shot himself.

Authorities are trying to work out how John Edwards was able to access a gun licence with a 40-year history of violence and abuse. Edwards stalked and murdered his two children when they were supposed to be safe. | @ursulaheger pic.twitter.com/4kauBFLlUR

The trio's inquest, due to resume Tuesday, has been told the 67-year-old had been planning for at least six months to kill his children. He was able to legally acquire a gun licence, despite a violent history.

Based on his history and a note found in Edwards' pocket, the lead police investigator suspects the financial planner could have hired private investigators to find the family.

"(The note) appeared to be a timetable of Jennifer's movements to and from school," Detective Sergeant Tara Phillips told the NSW Coroners Court on Monday.

Edwards had previously used a private investigator to track his most recent ex-wife and the children's mother, solicitor Olga Edwards, the officer said.

Having tracked down and spoken to numerous ex-partners of Edwards and many of his children, the detective painted a picture of a controlling, narcissistic, self-centred and calculating man.

"He had a history of exerting control over the women in his life and his children. He had a propensity for domestic violence," she said. 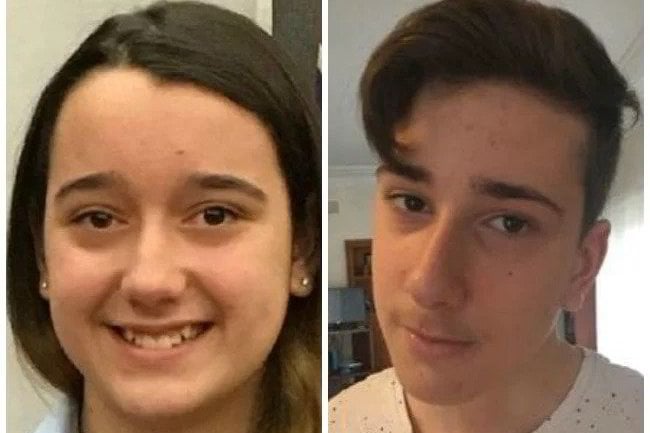 When Edwards' 15-year marriage to Olga broke down in 2016, he "became consumed with maintaining a relationship with Jack and Jennifer" and blamed Olga for the children's estrangement, the detective said.

After the children's murder, Olga detailed to Det Sgt Phillips how Edwards had over the years physically abused the children over minor things, such as touching his phone or CD collection.

But exactly how he found the family in West Pennant Hills may never be known.

"He'd set fire to all his electronics, so we were unable to extract (anything)," Det Sgt Phillips said.

Olga Edwards' boss David Brown is expected to tell the inquest on Tuesday about how he was involved in a significant argument with Edwards when helping Olga collect her belonging from the marital home.

The inquest, which is expected to run until September 25, will closely examine how Edwards was able to legally acquire the handguns he used to kill his children and then himself.

If you think you may be experiencing depression or another mental health problem, please contact Lifeline 13 11 14 or lifeline.org.au.﻿

Malcolm Turnbull has accused the federal government of lacking an aged-care coronavirus plan and failing to take responsibility for the troubled sector.

Haven’t always agreed with Malcolm Turnbull but he’s right about this - why didn’t the Morrison Government have a plan for aged care and COVID-19? pic.twitter.com/MNHhMKcwyp

"The question I think that could be asked of Scott Morrison is what would you suggest Dan Andrews should do differently right now?" Mr Turnbull told the ABC.

With the political blowtorch being applied to the state Labor government, Mr Turnbull put the heat back on the federal coalition's coronavirus response.

He said it was obvious aged-care facilities were going to be a serious problem based on international experience and the April outbreak in a Sydney nursing home.

"I didn't get the impression that anybody was stepping up and taking responsibility for that, particularly after Newmarch House demonstrated the nature of the problem," the ex-Liberal leader said.

He stopped short of joining Labor's calls for Aged Care Minister Richard Colbeck to be sacked.

An inquiry into the 2017 Manchester Arena bombing that killed 22 people has heard of multiple "missed opportunities" to stop the attack.

Several people raised suspicions about attacker Salman Abedi before the blast. Both Police and security were alerted, but no action was taken.

A public inquiry into the May 2017 attack at the end of an Ariana Grande concert began on Monday and could continue for months.

"What happened that night was the most devastating terrorist attack in the UK for many years," Paul Greaney QC told the inquiry.

"The inquiry will leave no stone unturned."

A father told the inquiry he approached a man matching Abedi's description and asked what he had in his large backpack.

The man didn’t reply. The witness said: "It doesn’t look very good, you know, what you see with bombs and such, you with a rucksack like this in a place like this. What are you doing?"

The man responded that he was waiting for someone and asked for the time.

The father raised concerns with security, but felt "fobbed off".

Sir John Saunders, a retired High Court judge, opened the inquiry saying, "If I conclude things went wrong then I shall say so, but we are not looking for scapegoats. We are searching for the truth.

"The explosion killed 22 people, including children; the youngest was eight-years-old," he said.

The first Australian to reach the men's last eight at Flushing Meadows since John Millman in 2018, the 21st seed now awaits the winner of second-seeded Austrian Dominic Thiem and Canadian Felix Auger-Aliassime.

When the US Open started, neither promising 21-year-old de Minaur nor 30-year-old Pospisil — who grabbed more attention in recent weeks as Novak Djokovic's sidekick in starting a new players association — would have been tipped as a major winner.

But with Djokovic disqualified on Sunday after striking a line judge in the throat with a ball, plus Roger Federer and Rafa Nadal not at Flushing Meadows and Andy Murray suffering an early exit, the chances of de Minaur winning the title have grown.

- India's coronavirus cases have surged to 4.2 million, passing Brazil to become the second-highest total in the world. With more than 71,000 deaths, it also has the third-highest death toll.

- Kremlin critic Alexei Navalny has been removed from a medically induced coma and is responding to speech, Berlin's Charite hospital has said in a statement. Navalny, who was airlifted to Germany after a suspected poisoning on a Russian domestic flight last month, is being weaned off medical ventilation.

- Novak Djokovic has been fined US$10,000 for unsportsmanlike conduct at the US Open after being defaulted for accidentally hitting a line judge in the throat with a ball.