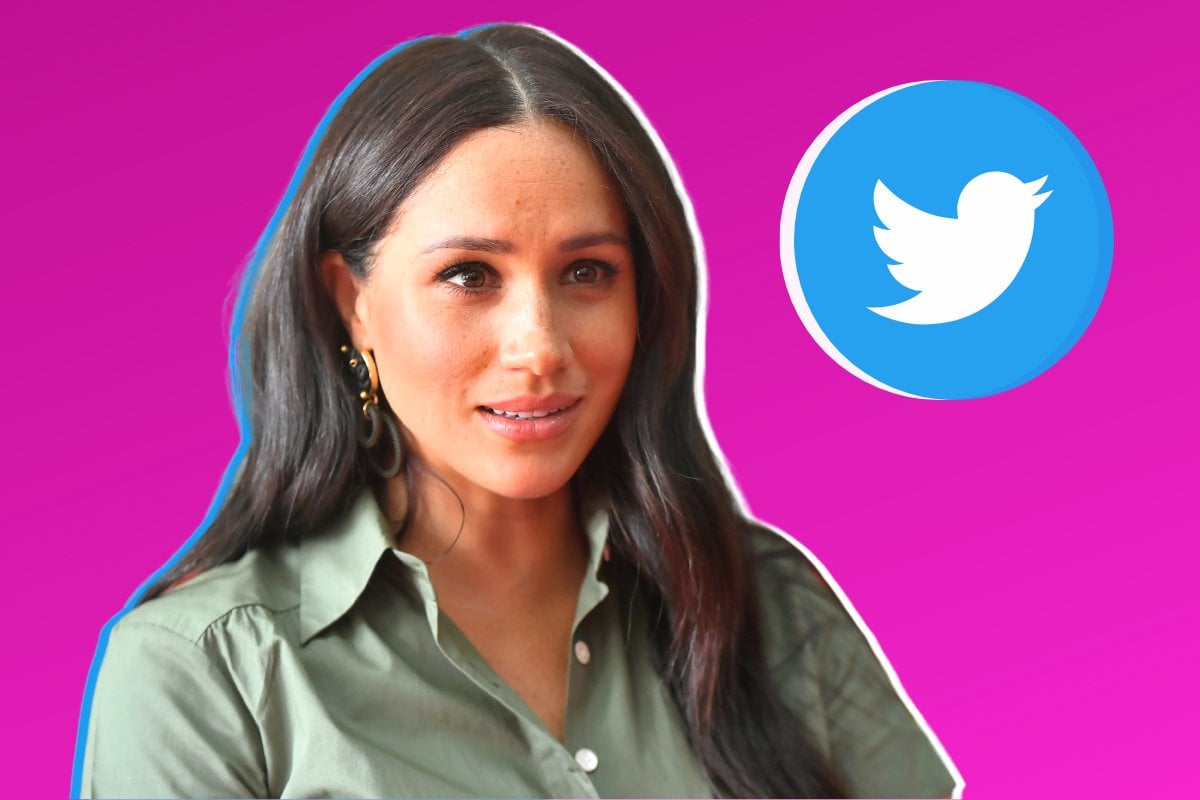 Unfortunately for Markle, being harassed and trolled became a part of life as soon as she was linked to the British royal family. She's even been told she was the "most trolled person in the entire world".

And while you may be imagining thousands of people furiously tapping away at their phones, sending their negative opinions out into the world, a new report has found the trolling of Markle is much more targeted and coordinated than it appears.

Bot Sentinel, a Twitter analytics service, analysed about 114,000 hateful tweets posted since January 2020 about the Duke and Duchess of Sussex, including racist content, accusations Markle was faking her second pregnancy and death threats.

The analysis found that 70 per cent of the posts came from just 83 Twitter accounts. The tweets had an estimated reach of 17 million Twitter users.

This on its own is incredibly interesting information. Those numbers are staggering, showing the targeted campaign against Markle. But it's also the coordination between the accounts, which have more than 187,000 combined followers, that makes this so dangerous.

Sentinel identified 55 "primary accounts" responsible for creating the vast majority of hateful content against Markle, and an additional 28 "secondary accounts" which exist primarily to retweet the tweets of the primary group, amplifying their reach.

It took us 150 hours to analyze and review the tweets, retweets, mentions, and friend/follower connections outlined in the report. We painstakingly examined everything because we knew other researchers and members of the media would scrutinize our work.https://t.co/u3eFVBka5Y

Bot Sentinel CEO Christopher Bouzy told BuzzFeed News the anti-Meghan Twitter campaign was unlike anything he and his team had ever seen before.

"There's no motive," he said. "Are these people who hate her? Is it racism? Are they trying to hurt [the Duke and Duchess'] credibility? Your guess is as good as ours."

He pressed that these key 83 accounts were not run by 'bots' (automated programs, which are renowned on social media for spamming low quality or false content), but real-life human beings who have some level of knowledge and experience in how social media operates.

New: Twitter has taken additional enforcement action and suspended three accounts operated by one of the main culprits in our report. This account was responsible for over 350 tweets in a single day. pic.twitter.com/99Huh039Qy

The report published the names of these accounts.

Twitter prohibits hate speech and harassment, including coordinated harmful activity, in its guidelines, but many of the primary accounts engage in behaviour specifically to avoid suspension, such as making their accounts private or temporarily deactivating them.

They may label themselves a 'parody', though they are not, and use coded racist language and dog whistles. They also tweet other, innocuous things about other members of the royal family so the hateful messages are harder to find.

The Duke and Duchess of Sussex do not use social media these days, 'retiring' their accounts in March 2020.

A post shared by The Duke and Duchess of Sussex (@sussexroyal)

In 2019, Markle said the abuse she received was almost "unsurvivable".

"What was able to just be manufactured and churned out, it's almost unsurvivable," she said on the Teenager Therapy podcast. "That's so big, you can't even think of what that feels like. Because I don't care if you're 15 or 25, if people are saying things about you that aren't true, what that does to your mental and emotional health is so damaging."

She expanded on this a week later in a discussion at the Fortune Most Powerful Women Next Gen Summit.

"For my own self-preservation, I have not been on social media for a very long time. I made a personal  choice to not have any account, so I don't know what's out there, and in many ways that's helpful for me," she explained.

Bot Sentinel's report shows that a major proportion of the hate towards Markle is not spontaneous. It is created by people - real people - with a vendetta against her, for whatever reason. They're a small group of people gaming the system to make themselves appear more powerful than they are, amplifying their own messaging to embolden others and to create more hate and negativity.

"These primary and secondary accounts are pushing [hate and disinformation] out, and then it's being taken over by organic hate," Bouzy said. "You have the ringleaders, then the secondary accounts, and then an outside network that also amplifies and pushes a certain narrative."

Twitter has so far suspended three of the accounts raised in the report.

Bot Sentinel has previously analysed the right-wing campaign to discredit the results of the 2020 American election, accounts behind COVID-19 disinformation, and online abuse toward football players after the English team lost in the Euro 2020 final.

Reply
Upvote
6 upvotes
Given that it's already been established that 10% of Twitter users are responsible for 80% of all tweets, doesn't it stand to reason that any content on that platform (positive or negative in nature) comes from a relative minority?

Reply
Upvote
6 upvotes
@mamamia-user-482898552 Thank you - this fact should be shouted from the rooftops. Twitter is not a reliable source or indicator for anything whatsoever.
S
simple simon 9 months ago

Reply
Upvote
4 upvotes
@mamamia-user-482898552 Or that we need to treat something that someone posted on social media as an emergency that media outlets have to thoroughly dissect and criticize. (Especially when the person posting it is probably doing so just to get a reaction.)
M
mamamia-user-482898552 9 months ago

Reply
Upvote
1 upvotes
@simple simon Yes, and we also should acknowledge that these articles on social media are also used to control the narrative of the apparently wronged party. It gains traction because media outlets seize upon the content because it's easy copy.
J
jooce71b 10 months ago

Reply
Upvote
3 upvotes
This study means nothing unless the same study is done looking into twitter hate campaigns agains the Cambridges or the Royal Family to make a comparison.
Unfortunately not going to happen. This study was a hook to garner donations from the Sussex Squad, well known to band together to throw everything into the defence of their beloved Sussexes. Even their personal donations of money. Bouzy has just found and exploited the best instant money making scheme.
C
cat 10 months ago

This study means nothing unless the same study is done looking into twitter hate campaigns agains the Cambridges or the Royal Family.

.... why? Whats the logic there? Theres no hate campaigns against any other members of the royal family *or people in the world* that are even vaguely comparable. Thats why they're studying it.

Are you alleging that  Megan somehow got this group to do this report to then... get donations from  twitter supporters? Why would they donate money? And you're saying that she would then pay kickbacks to Bot Sentinel?