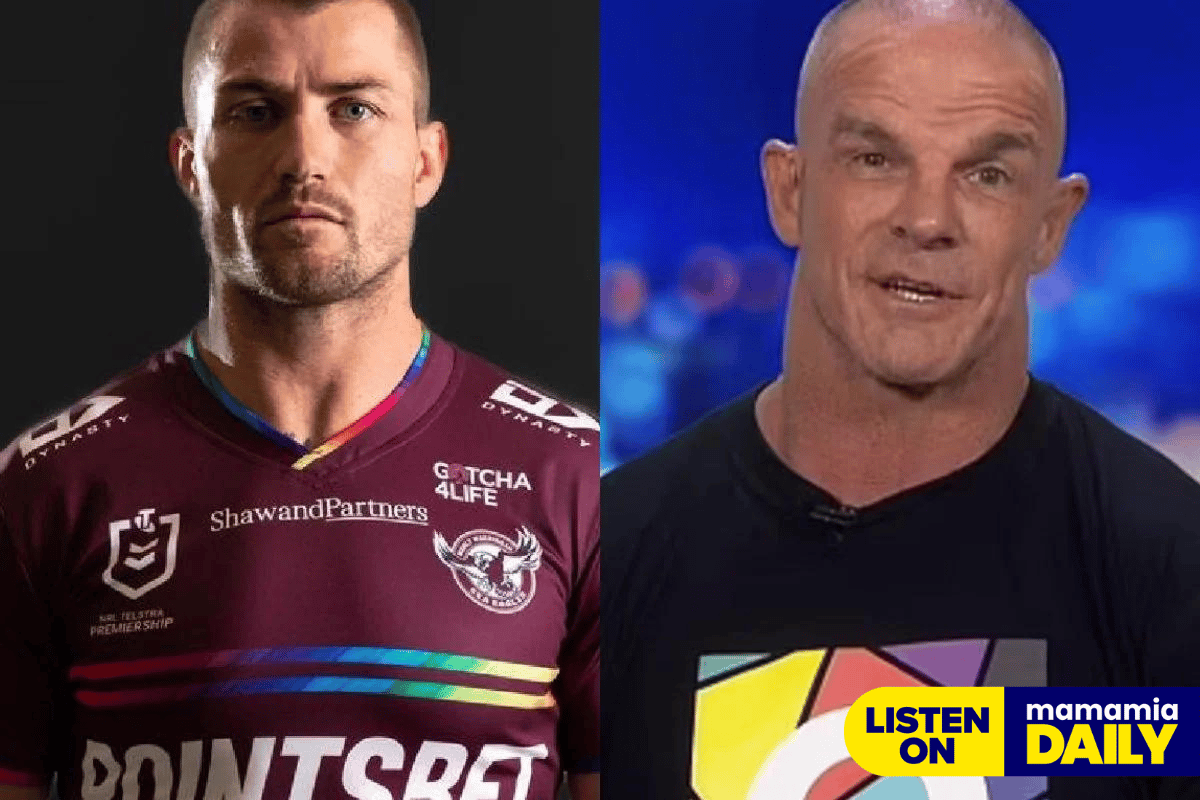 Listen to this story being read by Jessie Stephens, here.

It has been said that there are no winners.

When the Manly Sea Eagles football club announced on Monday that their players would wear a pride jersey at this week's game in an effort to promote inclusivity and diversity, people who know a thing or two about NRL held their breath.

They knew what was coming.

Whispers began circulating that a number of players – who learned about the pride round at the same time as everyone else did – would boycott the game rather than wear the rainbow-striped jersey.

By Monday night, an emergency meeting was held with seven players who voiced concern that the message was at odds with their cultural and religious beliefs. It has since been decided those players will not take to the field on Thursday night, in a game which will have a significant bearing on the rest of the season.

There have been apologies and statements, comments and debates. And perhaps it does look, upon first glance, like there are no winners.

There are the Manly Sea Eagles, who wished to make a statement of solidarity and unity and did the opposite.

There is Ian Roberts, the NRL's first and only openly gay player, who thought this might be a good thing. Instead, he learned that little has changed since he declared he was gay while playing for the Sea Eagles 27 years ago. The culture has barely shifted, with at least seven players still believing his existence is sinful.

There are the (presumed) gay players or potential players that have – like Roberts – learned that their sexual orientation is not roundly endorsed. In a self-congratulatory culture that might believe the battle for LGBTQI+ rights has been won, we learned this week that in some corners, they absolutely have not. If you play rugby league, it seems, you will stand alongside men who believe your sexual orientation will land you in hell.

Then there are the dissidents who believe in their religious freedom, who felt blindsided and cornered by their own club. The decision wasn’t explained. There was no patience or conversation. An attempt at a pride round was haphazard and chaotic.

And of course there are the spectators. The fans who put their hands in their pockets to cheer on the sidelines, who deserve to belong to a club regardless of who they happen to love.

So what was the point in any of it?

The point – the intention – is still admirable, even if the execution left much to be desired. The apology delivered by Sea Eagles coach Des Hasler is one of the most compassionate and nuanced in NRL history, acknowledging the failure of process and breakdown of communication that left so many stakeholders feeling blindsided.

But let's leave that aside for a moment.

How else do you change a culture that isn't budging?

Listen to today's episode of Mamamia Out Loud, where we discuss the "Big Jersey Debate". Post continues below.

When players do not feel safe enough or empowered enough or brave enough to express their sexual identity, then we're looking at a code that is institutionally and culturally homophobic. It was only a few months ago that a Warriors player audibly shouted "get up Kyle you f****t" at a Cowboys player, who was lying on the field injured. The NRL was widely criticised for dragging their feet when it came to investigating the matter.

For an NRL team to wear a pride jersey would be to send the message that any boy or young man who dreams of growing up to play professional rugby league is welcome there. It is to say: You can expect the same rights and the same level of respect as you would in any other Australian workplace.

The Manly Sea Eagles is an institution bigger than any individual's religious beliefs. The players represent the club, not the other way round. And the players certainly are not there to represent Christianity.

The argument has well and truly be made that there does appear to be some inconsistency in regards to which 'sins' players are willing to overlook, and which 'sins' they are not.

One might be forgiven for barely noticing the pride stripe, given the size of the "Pointsbet" logo printed on the front of the jersey. On Thursday night, they will be playing at 4 Pines Park. These players seem pretty pliable when it comes to the “sins” of gambling and drinking. They’ll overlook sinful behaviour, it seems, if it’s paying their salary.

With that said, religious freedom is a core tenet of a democracy. I respect the right of those seven players to boycott a round they do not support.

They’re young. They've been brought up in a specific religious context which has exposed them to a specific set of beliefs – much like we all have. Perhaps one day they will change their minds. Or perhaps they won't.

But this story, we ought to remember, was never meant to be about them.

It’s about a club trying to do better.

And more surprising than that – a club willing to sacrifice players, and perhaps a season defining win, for what they consider to be the greater good.

Some will say this is the politicisation of sport, but at some point we've got to stop talking about gay rights as though they're indicative of some sort of political position.

A minority being marginalised on the public stage is about justice.

But when a sporting club fights for a pride round – even when it's unpopular, even when it will cost them players, and especially when it could cost them a spot in the top eight – that looks a lot to me like progress.

Jessie Stephens is the author of best-selling book, Heartsick. For more, you can follow her on  Instagram.

Interesting perspective, thank you Jessie. It strikes me that round 20 is Women's round and yet it has been comandeered by 7 men who enjoy privileged positions in sport; ergo the community. Full plaudits to Manly for taking a step to visibly recognise diversity in all it's forms, such that would also celebrate the cultural and religious diversity of the 7 who have taken issue. And that issue? Is a failure to be 'consulted' by the Club who employs them. A failure in courtesy at it's highest but in no contemplation of any law or international covenant an abrogation of their human rights. The very human rights Manly seeks to celebrate in honour of the marginalised groups they champion through the Pride jersey gesture.

Reply
Upvote
2 upvotes
My take on its, that these players signed a contract with the club,which stated that they they were willing to play in whatever Jersey's the club deemed necessary or desirable to me there are legal issues that sit around this..
Too me this hypocrisy at the highest order, these excluded players need to take a close look at themselves..
S
snorks 20 days ago

Reply
Upvote
1 upvotes
@lesleygraham2 the contract doesn't actually say that, it says they have to wear team apparel.
Could easily just take the flag off their shirts.
M
mandyjr82 20 days ago

Reply
Upvote
1 upvotes
@lesleygraham2 I think that is the point
Under OPERATIVE PROVISIONS Section 3 (xiv) Wear only Team Apparel at training, in Matches and in all other public appearances determined by the Club and notified to the Player. The players where not notified...
C
cat 19 days ago