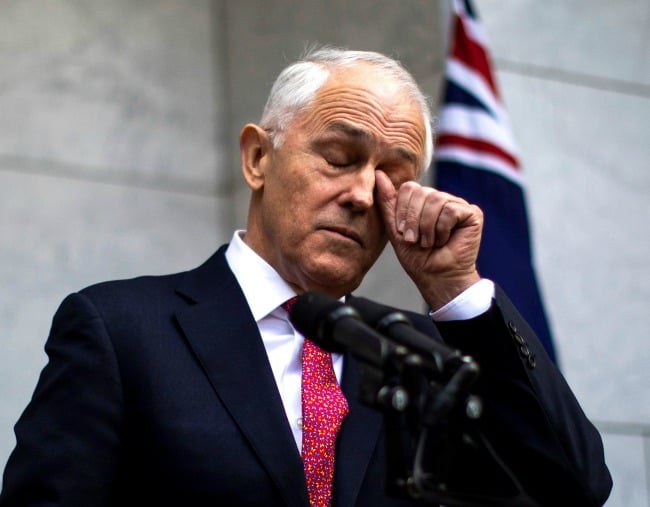 Dumped prime minister Malcolm Turnbull is reportedly set to quit federal parliament this week and spark a by-election in his seat on October 6.

Nine Network and the ABC report Mr Turnbull will quit parliament this week, after he promised he wouldn’t stay on the back bench.

The move will leave the coalition one seat down for two sitting weeks, leaving new Prime Minister Scott Morrison in a precarious position with no majority in parliament.

Just days after Tony Abbott helped orchestrate Mr Turnbull’s demise, he is now campaigning for his sister to replace him in his plum Sydney electorate.

Christine Forster on Monday confirmed she intends to run for Liberal pre-selection in Wentworth after being encouraged by several people within the party to replace the ousted prime minister.

Ms Forster also has the backing of her brother, who said she would be a good competitor in the impending by-election.

“She and I famously have had our differences but she is an outstanding individual,” Mr Abbott told reporters in Sydney.


“If she does put her hand up for Wentworth and if she is successful, I know she will be a wonderful, wonderful competitor in any by-election and she’d be a great local member if she were elected.”

Mr Turnbull is yet to announce his resignation from the harbourside seat but told reporters last week it won’t be long.

“It’s a difficult situation and I don’t want to be seen to be disrespecting Malcolm – who I do respect,” Ms Forster told AAP.

Mr Abbott, was last week accused of being a “wrecker” by fellow Liberal MPs for laying the groundwork for the sudden move by the party’s conservative wing against Mr Turnbull.

He had backed fellow conservative Peter Dutton who lost his chance at the top job when he was overtaken by Scott Morrison, who was sworn in as prime minister on Friday.

Ms Forster who is a City of Sydney councillor said she had a strong record of championing Liberal Party values at a local government level.

“I think as someone with local credentials and a strong track record of strong liberalism, I feel they are the types of candidates we want in any seat,” Ms Forster said.

“I’ve been strong in espousing and representing Liberal values in the city of Sydney.”

Businessman and former Australian ambassador to Israel Dave Sharma is said to be the frontrunner to replace Mr Turnbull as the Liberal candidate.

Waverley Deputy Mayor Dominic Wy Kanak has been announced as the Greens candidate for the seat.