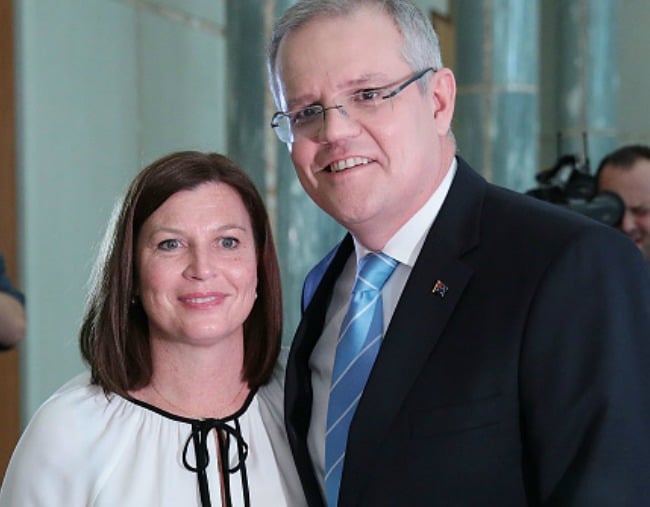 Scott Morrison met his wife, Jenny, when they were just 12 years old.

The now prime minister and first lady of Australia met at church and began dating when they were 16 years old.

They married when they were 21.

The couple live in a brick bungalow in the southern Sydney suburb of Port Hacking, with their two daughters, Abbey and Lily.

Jenny is a registered nurse who is actively involved in the Horizon Church, a Pentecostal church located in Sutherland, just 10 kilometres away in the Shire.

Over an 18 year period they tried multiple times to conceive a child through IVF. They would later conceive Abbey and Lily naturally.

In 2007, Morrison won preselection for the federal seat of Cook, which encompasses the Sutherland Shire.

In 2008, during his maiden speech to Parliament, Morrison spoke of the couple’s struggle to conceive.

“To my wife, Jenny, on Valentine’s Day: words are not enough. She has loved and supported me in all things and made countless sacrifices, consistent with her generous, selfless and caring nature,” he said.

“However, above all, I thank her for her determination to never give up hope for us to have a child. After 14 years of bitter disappointments, God remembered her faithfulness and blessed us with our miracle child, Abbey Rose, on the seventh of the seventh of the seventh, to whom I dedicate this speech today in the hope of an even better future for her and her generation.”

Evelyn McDonnell, who lives next to the Morrisons in Port Hacking, told the Sun Herald Jenny’s a “real friendly person”.

“They could be like everyone else and sit out the back but, no, they sit out the front often. There’s a lot of really big houses all down the laneways and all by the water [but] they chose obviously to live here to be close to everybody, to be a part of the community,” she told the publication.

The family will now move into The Lodge, as Morrison settles into the role as the 30th Prime Minister of Australia.