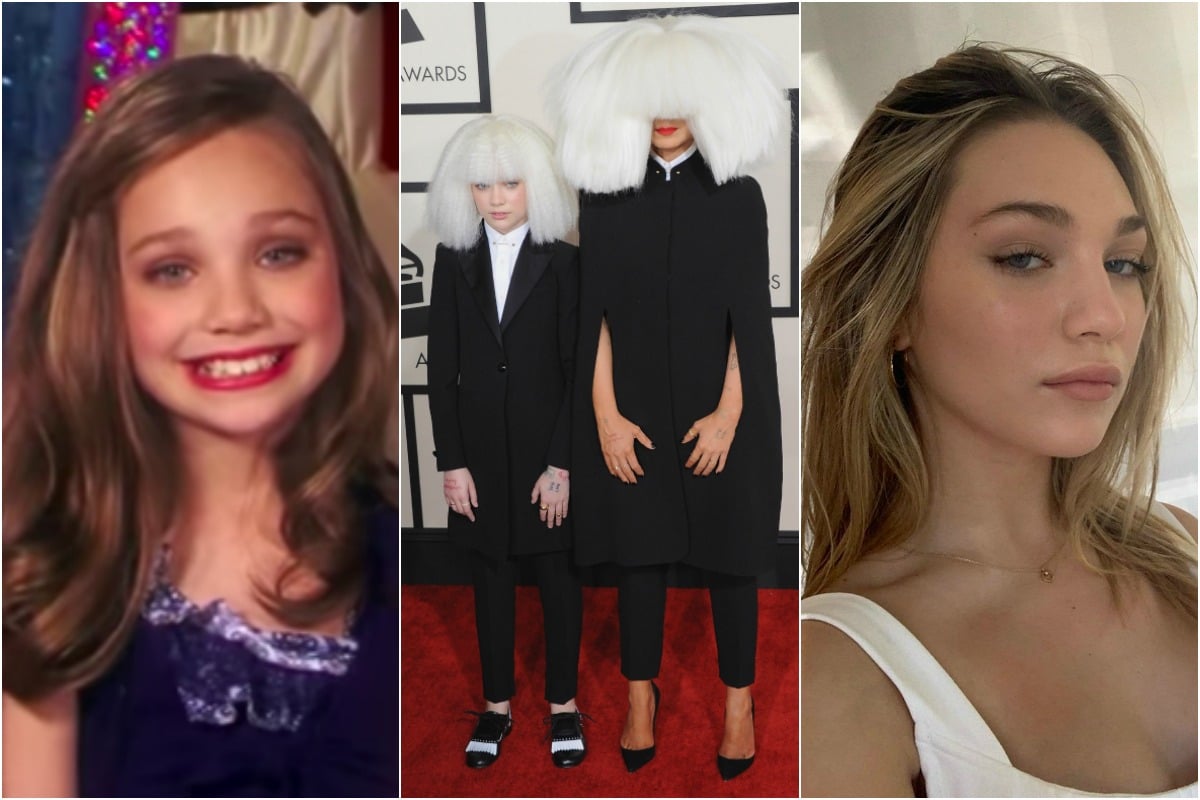 We first met Maddie Ziegler when she was just eight.

A regular on the top of Abby Lee's 'dance pyramid,' she appeared on the hugely popular reality TV show Dance Moms from 2011 until 2016.

But that popularity was catapulted onto a much more global stage thanks to her collaboration with Australian singer/songwriter Sia Furler in the 2014 music video 'Chandelier', when she was 11.

Now 17, she's amassed an enormous following and has a CV that would put many adults to shame.

Her name is appearing in the headlines at the moment because of a run-in with Harvey Weinstein that Sia stopped in its tracks. Given the Hollywood mogul's crimes, that 'run-in' could have ended up a lot worse than it did.

But before we get to that, let's look back at Maddie's rise to fame.

She regularly scored the best solos, awards and opportunities thanks to her incredible talent, and often had the other girls in the class green with envy because of the obvious favouritism that came her way.

She started dancing when she was four, and alongside her younger sister Mackenzie and their mum Melissa, the Ziegler family became the stars of the popular reality show for four years. 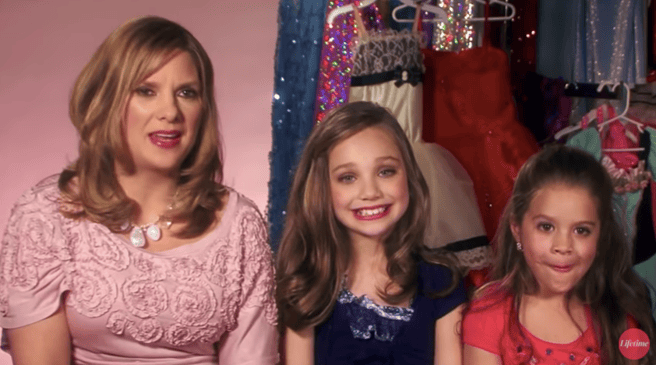 Melissa and her daughters Maddie and Mackenzie on Dance Moms Season One.

In an interview with Cosmopolitan, Melissa said at the time she thought the show was going to be a platform to showcase her daughter's love for dance, but she "got more than she bargained for".

"The girls would be like, 'Mom, people hate me.' That was the hardest part of the fame. There's so many fake accounts of my kids and people pretending to be them'," she told the publication.

The girls were homeschooled from 2013, and while their relationship is enviable now, Mackenzie grew up in her older sister's shadow and admitted to NewsHub, "I didn’t really like it when I was younger because I was getting compared to Maddie".

Eventually in 2016, both sisters decided they wanted to stop filming the show. As they told their mum, they weren't enjoying it anymore and wanted to be able to explore other opportunities outside of the constraints of the Dance Moms contract.

Dance Moms might have built Maddie a devoted fan base, but it was Sia that made her famous.

A fan of the show, the singer tweeted the young dancer and asked her to be in one of her music videos in 2014.

@maddieziegler @dancemom1313 hey maddie, you want to play me in the video for my first single? Melissa, my people are trying to get in touch

Just 11 at the time, and dressed in a blond wig and leotard, Maddie took up the offer and performed an incredible solo in 'Chandelier', which very quickly catapulted her into a new kind of stardom.

"Once I did Chandelier everything changed for me and everything just blew up so quickly," Maddie told Mamamia in 2018. 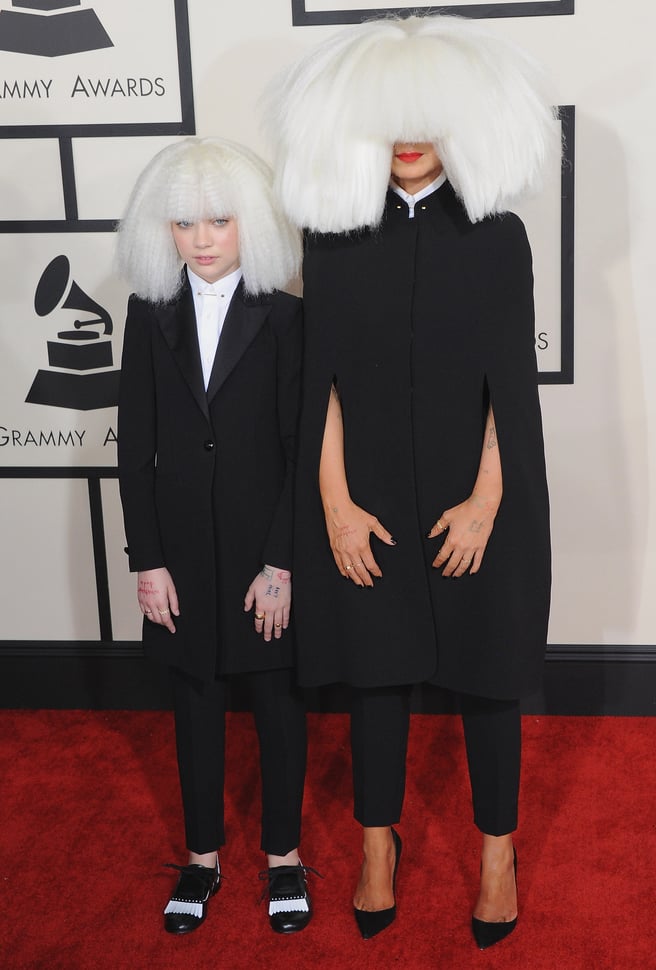 "I had already done Dance Moms so obviously there were people who already recognised me and my life had already been changed a lot by doing that show. But after the Sia video came out things just became crazy. I mean, there were some big celebrities that all of a sudden knew my name.

"It was hard at such a young age because now I really understand everything that was going on then. Now that I’m older I understand what was happening. Back then it was a lot of pressure on me, it was a lot to take on at that age," she said.

After amassing two billion views in that first video, Sia and Maddie continued to collaborate - cementing themselves as an unstoppable creative duo. 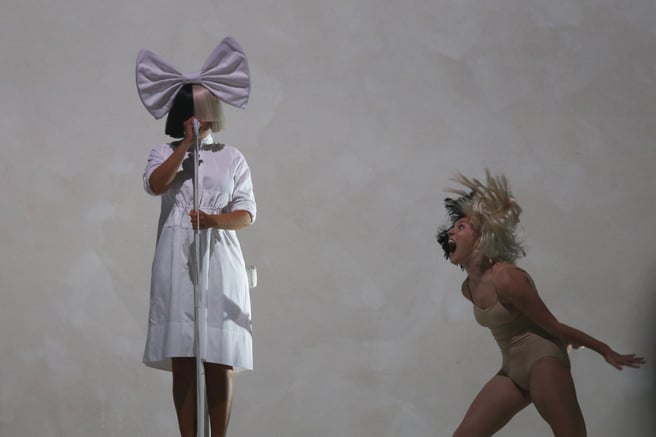 They toured all over the world together, and Maddie went on to perform in the music videos for 'Big Girls Cry', 'Elastic Heart', 'Cheap Thrills', and 'The Greatest'. Pretty soon fans couldn't talk about one without mentioning the other.

"Maddie was already famous when I discovered her, but I have certainly expanded her exposure and feel responsible for that. I feel very protective of her and my goal is to empower her in whatever choices she makes," Sia said in a series of tweets in response to an article that questioned their close relationship.

"What I learned from Maddie is that fame affects her differently than how it affected me. I can only trust that she is telling me the truth. If that changes, we stop," Sia wrote in response.

"I do check in with Maddie weekly about whether she wants this," she added.

This article poses a question I have asked myself often. I do check in with Maddie weekly about whether she wants this, and assure her if she ever wants it to stop it stops. It's a conversation we should all be having. Not just myself but all directors, stage parents and agents.

In 2019, Maddie said of Sia: "She's the best person in life," confirming to Jimmy Fallon that the singer had been made her real life Godmother.

"If anything were to happen, she would take me which is really cool. From the day we met we clicked, and we knew it was a special connection. She's the greatest," Maddie said.

When out in public, Maddie says Sia often gets mistaken by young fans as her mum, thanks to how meticulously she has protected her identity over the years.

But on the teenager's social media, those trademark eye-covering wigs are often left behind, with the below video showing the pair's obvious affection for each other. ﻿

to my beautiful godmom. thank you for helping me grow into the person i am today. can’t wait to watch pimple popping videos in bed for the rest of time. i love you happy birthday ❤️

More recently Sia has directed Maddie in a film she wrote called Music, which also stars Kate Hudson, and is due on our screens in August, 2020.

The musical is about an autistic teenager (Ziegler), who is cared for by her sober, drug-dealing sister (Hudson).

As Maddie's celebrity grew, it appears she attracted the attention of then Hollywood heavyweight Harvey Weinstein. But Sia's motherly instincts kicked in.

"You know I kept her off a plane that Harvey Weinstein tried to get her on?" she told the Zach Sang Show this week.

In March 2020, Weinstein was found guilty of rape in the third degree and a criminal sexual act in the first degree, and sentenced to 23 years in prison. Inspired by the #MeToo movement of 2017, more than 80 different accusers spanning three decades have come forward with accusations about Weinstein.

But his alleged crimes were well known in the industry long before his arrest.

Maddie's career and influence in 2020.

As Maddie's mum wrote in an article for Cosmo, 'Chandelier' planted a seed for her daughter.

After a taste of acting, Maddie decided she wanted to pursue more opportunities in that field and has in the years since landed guest roles on the Disney Channel and Nickelodeon, starred in animated film Ballerina in 2016, and played Christina in the feature film The Book of Henry in 2017.

Now she's also about to star in the soon to be released Music, by Sia.

But the 17-year-old hasn't just been forging a dance and acting career, she's also written her own memoir (which became a New York Best Seller), and wrote a trilogy of novels for teenagers.

She's also tried her hand at dance judging, dance teaching, started her own fashion line, and modelled for everyone from Ralph Lauren, Clean & Clear, Target and Pop Tarts.

With more than 13 million followers on Instagram, 3.5 million YouTube subscribers, and an estimated net worth of more than AUD $7 million, Maddie's influence is only becoming more and more prominent, particularly amongst Gen Z.

With that prominence, of course, comes the less savoury side of fame.﻿﻿

She's dating Australian singer Eddie Benjamin, but keeps their relationship fairly private, having already had a taste of what it's like to have her personal life torn apart by the tabloids. At 15, she went through a breakup with an Australian influencer, and every detail of their split was publicised.

"I had a public relationship for two years, and I am never, ever going to make any relationship public as much as I did," she shared with Marie Claire magazine in 2019.

Despite all of the attention, Maddie has managed to take a leaf out of her Godmother's book, with Marie Claire sharing that "Ziegler is shockingly grounded for someone who’s been in the public eye for half her life".

"I never want to let fame get to my head," Maddie said. "It’s such an ugly thing."