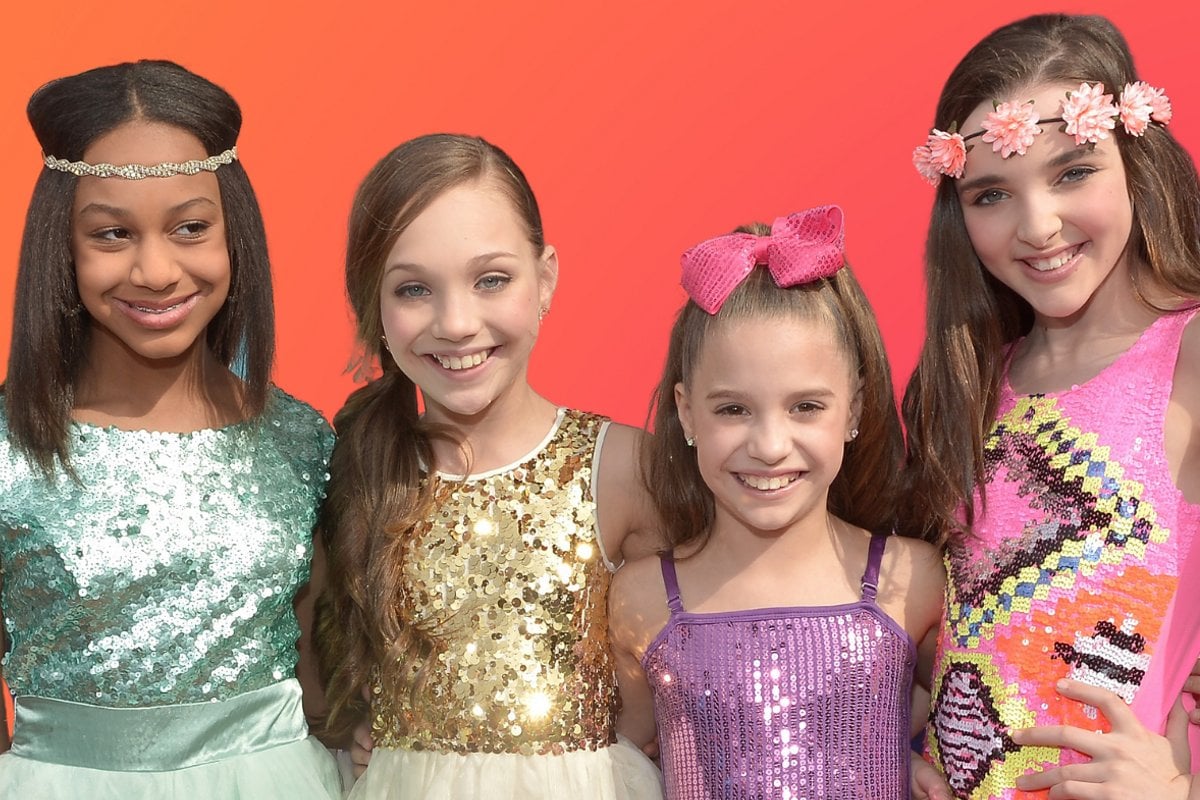 It’s the show that either made us glad we were never pushed to attend ballet lessons past the age of five, or salty we didn’t stick with it.

There’s no doubt about it; the sheer intensity uncovered in Dance Moms of the US junior competitive dance scene made for addictive viewing.

Were we sometimes jealous of the talents of children a fraction of our age? Absolutely. But did we want to be subjected to the wrath of terrifying dance coach Abby Lee Miller if our pirouettes were slightly off? Hell no.

Watch the trailer for the first season of Dance Moms below. Post continues after video.

Since the program first premiered in 2011, some of the show's young dancers have been been catapulted into the spotlight, while others have kicked off their dancing shoes to take other paths.

Here’s what the kids from Dance Moms are doing now.

By far the most recognisable name that came out of Dance Moms, now-18-year-old Maddie Ziegler skyrocketed into Hollywood when Australian musician Sia cast her – complete with blunt bob wig – in her music videos for 'Chandelier' and 'Elastic Heart'.

More recently, Maddie has taken her signature modern moves to star in the music video for 'No New Friends' with LSD, Sia, Diplo, and Labrinth.

The dancer has also racked up a number of acting credits, appearing in Pretty Little Liars, Austin and Ally, and The Book of Henry.

She also has the starring role as the title character in Sia's film Music.

According to Deadline, the 18-year-old will soon take the silver screen in Steven Spielberg's upcoming West Side Story adaptation.

With more than 13 million followers on Instagram, the dancer and model has also dipped into the fashion world by releasing her own clothing line.

She has since released two albums and performed across several tours.

She hasn’t turned her back on dancing, though. Since leaving Dance Moms, she appeared on Dancing With The Stars: Juniors and made it to the finals.

The 16-year-old has also recently appeared in campaigns for Ralph Lauren and released her own book, Kenzie's Rules for Life: How to Be Happy, Healthy, and Dance to Your Own Beat.

JoJo Siwa, 17, appeared on two seasons of Dance Moms, and is now enjoying a successful music career in the US.

Singles like 'Boomerang' and 'Kid In A Candy Store' have launched her into the kid’s entertainment scene, and made her YouTube channel a hit with more than 12 million subscribers.

Boasting an exclusive licencing deal with Nickelodeon, JoJo has an endless range of merchandise items, including clothing, shoes, accessories, dolls, books, and even ice cream.

As a result, the dancer and singer reportedly has a net worth of $14 million.

"If I lost everything that I've created because of being myself and loving who I want to love, I don't want it," she told Jimmy Fallon.

"I'm just so happy. Now I get to share what makes me the happiest with the world and it makes my heart so happy."

Chloe Lukasiak left Dance Moms in 2014 after her mum had an argument with Abby Lee Miller.

Since then, the 19-year-old has become a social media influencer, boasting more than six million Instagram followers and a popular YouTube channel.

She has also released her own book, Girl on Pointe: Chloe's Guide to Taking On The World, and she has a budding acting career, scoring a role in TV movie, Center Stage: On Pointe.

The 19-year-old is currently studying marketing and creative writing at Pepperdine University.

Since 2018, the 19-year-old has starred on The Bold and the Beautiful. The budding actress is also working on a few film roles.

She's released her first children's book, Today I Dance, as well as a two singles.

The dancer is reportedly studying at The University of California in Los Angeles.

Brooke Hyland, 22, was the "older" original member of Dance Moms, but left in 2014 following a major fight between her mum and Abby Lee Miller.

Since graduating, the former reality TV star travelled the world before relocating to California, where she now works as a social media influencer.

While on Dance Moms, Abby Lee Miller threw a chair at Paige. The 20-year-old later sued her former dance teacher for emotional distress, however the lawsuit was dismissed.

Since leaving the show, Paige has turned her career sights to modelling.

Now working as an influencer, Paige is studying at West Virginia University.

I’ll be interested to see how long Jojo Siwa keeps up with this persona. Will she have a Disney child star type rebellion in a couple of years, a la Miley, or will she keep it up and become a one-woman Wiggles troupe?

Maddie has already done movies so it won’t be her film debut. She was in Book of Henry and did a voiceover in Ballerina.