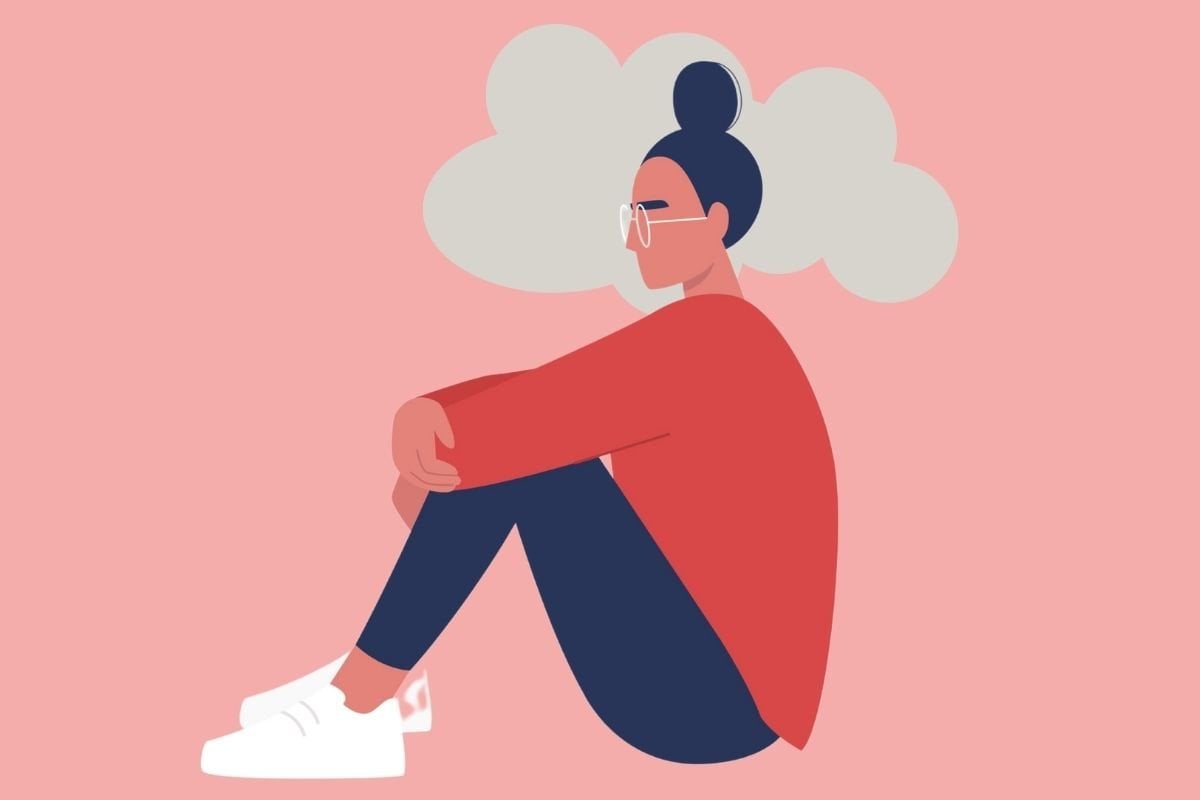 Like all good procrastinators, I spend a lot of time on the internet. This means a) I have of course watched the Netflix true-crime documentary The Tinder Swindler and b) I am aware of the concept of love bombing.

Cool story Hansel, but what do these two things have to do with each other?

Well, um, only EVERYTHING. Watching this documentary was, at least for me, like sitting through a masterclass of love bombing... and even the experts agree.

Watch the trailer for The Tinder Swindler. Post continues below.

"Simon Leviev (aka The Tinder Swindler) displays all the signs of love bombing," says Melissa Ferrari, a psychotherapist and relationship expert. "Lavish gifts, compliments, and he overwhelms his victims with a display of what seems like 'love' when in effect he is only entering these relationships to place control over the women."

"Once he has control, the three women who fall for Simon are then emotionally and financially abused living in the world of manipulation and lies that Simon has created – everything is about Simon and he has no regard for any of the women he is hurting. What it shows is how unhealthy, confusing and ultimately emotionally damaging a relationship with a narcissist can be," adds Melissa.

Of course, The Tinder Swindler is an extreme example of love bombing, but it doesn’t make the behaviours any less concerning.

As Mamamia's Adrienne Tam recently wrote, many people are quick to blame the victims and say they could never be conned by someone like Leviev, and honestly here’s hoping you never are. But just to be on the safe side, we spoke to three experts to find out everything you need to know about love bombing and why it’s so dangerous.

Firstly, what is love bombing?

"Love bombing is when at the beginning of a romantic relationship... you shower a person in compliments, affection, gifts, and outward communication in order to obtain power and control over another person's life," says Tamara Cavenett, President of the Australian Psychological Society and a practising clinical psychologist.

Why is it so dangerous?

"So, the danger behind it is that you get sucked into this false sense of romance and integrity and this sense of fun and excitement. It's like a form of entrapment," says relationship and life coach, Renee Brown.

Melissa says that a lot of the danger of love bombing lies in the fact that it’s so hard to detect, especially in the early stages.

"Early in a relationship... where our 'love hormones' are at their strongest, it’s not as easy as it may seem to recognise that the behaviour of a 'want-to-be-partner' is not normal. It can feel good when someone cannot seem to stop complimenting us or is whisking us away on a lavish romantic getaway, in some ways it resembles those Hollywood rom-coms... so it can be difficult to pick up that you are dealing with a controlling narcissist, rather than the love of your life," says Melissa.

Does love bombing only occur at the beginning of a relationship?

"[Love bombing usually occurs] at the beginning of the relationship, or any stage where the love bomber wants to try to regain control," says Renee.

"We can often see signs of love bombing when a relationship has ended and one partner does not want to let go," says Melissa. "They begin to shower you in gifts and compliments in an effort to win you back, not in an act of love, but because it makes them feel better to have you back to fill their need for that narcissistic supply."

What’s the connection between love bombing and narcissism?

"There was a research study that showed those who rate higher on narcissistic traits reported greater behaviours along the love bombing lines when they would commence relationships," says Tamara.

What are some key signs of love bombing?

The general rule when trying to spot love bombing is to look out for anything that seems like too much, too soon. It’s also commonly demonstrated in the below behaviours:

"One of the biggest indicators is that they’ll communicate excessively via text and phone," says Tamara. "But there will also be this expectation that you would return that frequency of communication."

"If you have just met someone and before they even have gotten to know you, they are telling you how special you are, how they have never met anyone like you or how you are their soul mate... then these are all signs that you may be dealing with a love bomber," says Melissa.

"What you want to be looking out for is when it feels strange or abnormal, for example, you do not get one bouquet of flowers at the office, they send 10," says Melissa. "Look for signs that it is not really about you, but them. They want you to show gratitude for the gifts and displays of affection with their actions feeding their own ego."

4. They monopolise your time.

"Love bombers will want to spend a huge amount of time with you to really embed that deep connection," says Tamara.

5. You become part of their inner circle soon after meeting them.

"They'll introduce you to important people early on to really bring you into their circle," says Tamara.

This might involve things like saying 'I love you' early on or wanting to move in together after a short period of time or even just rapidly painting an imaginary future together.

"There can be those moves to really cement the relationship much faster, whereas a healthy relationship is cautious and takes its time to develop and then it's stronger," says Tamara.

7. They make you feel guilty for putting boundaries in place.

"You see changes in their behaviour when you say 'no' to something or are not giving them what they want or are demanding," says Melissa.

What should you do if you think you’re being love bombed?

"Anytime a relationship starts to make you feel uncomfortable, confused or overwhelmed, that is the time to step back and slow things down. That does not mean that you need to necessarily end the relationship, but it will give you the opportunity to begin to ask whether this relationship is right for you," says Melissa.

"The first thing I would do is trial out a boundary," says Tamara. "It's often when you're saying no to someone that you get to see who they really are. It's about putting those boundaries in place and testing whether the other person will respect you. So, for example, they asked you to move in together. Would they respect it if you said no, you're not ready to yet, or would they make you feel guilty for that choice?"

3. Speak to family and friends.

"Our circle of friends and family can be helpful. Whilst you are overwhelmed and dealing with those hormonal feelings of love, those around us – who truly care for us – are not. And if they see behaviours as odd or unusual, then they can help us see a clearer picture of what is really happening," says Melissa.

"If you are really unsure, get a professional opinion," says Melissa.

"Of course, if you feel unsafe in any relationship, you should end it immediately," says Melissa.

"I would 100 per cent just disconnect without any kind of engagement with the love bomber," says Renee. "Because that is the same strategy that is applied with any kind of narcissism in a relationship. The last thing you want to do is sit down, confront it and talk about it because narcissists will just manipulate the entire conversation and turn it back on you."

How do you tell the difference between a genuine gesture and love bombing?

Obviously, not all romantic gestures have sinister undertones and not everyone you meet is going to be a love bomber. Though this can be difficult to differentiate, especially at the beginning of a relationship, looking for examples of vulnerability can be a good place to start.

"Genuine thoughtful acts come from a place of vulnerability and loyalty," says Renee. "When people are genuine, it's usually coming from a place where they have something to lose by being that nice. Whereas with love bombing, it’s almost like a sales pitch where they've got nothing to lose, if they catch someone great, if not, they just move on to the next victim."

The experts also agree that taking it slow, especially at the beginning, while maintaining your support structures, is an important aspect of all new relationships.

"Make sure you keep healthy relationships with your other support structures... that can be a really telling thing when you're in a new relationship is whether or not your new partner would support all the other things that are important to you in life," says Tamara.

"Not everyone is love bombing you," add Melissa. "Whilst it can happen, you are most likely dealing with someone who is confused about how to show affection and desperate like you to find love. So in a new relationship, take your time, get to know each other, and remember if you need support, fall back on your network of friends and family around you."

As for Leviev, after serving five months of a 15-month jail sentence, he was released on good behaviour and is currently living as a free-man in Israel. And the women he love bombed and then went on to con? Unfortunately, they are currently still paying off their debts and working through the emotional trauma incurred from their time with him.

And though Leviev clearly has not paid the price for his actions, he has inadvertently put love bombing on a global stage and opened all our eyes to this dangerous form of behaviour.

Have you ever been love-bombed? What was your experience with love-bombing like?