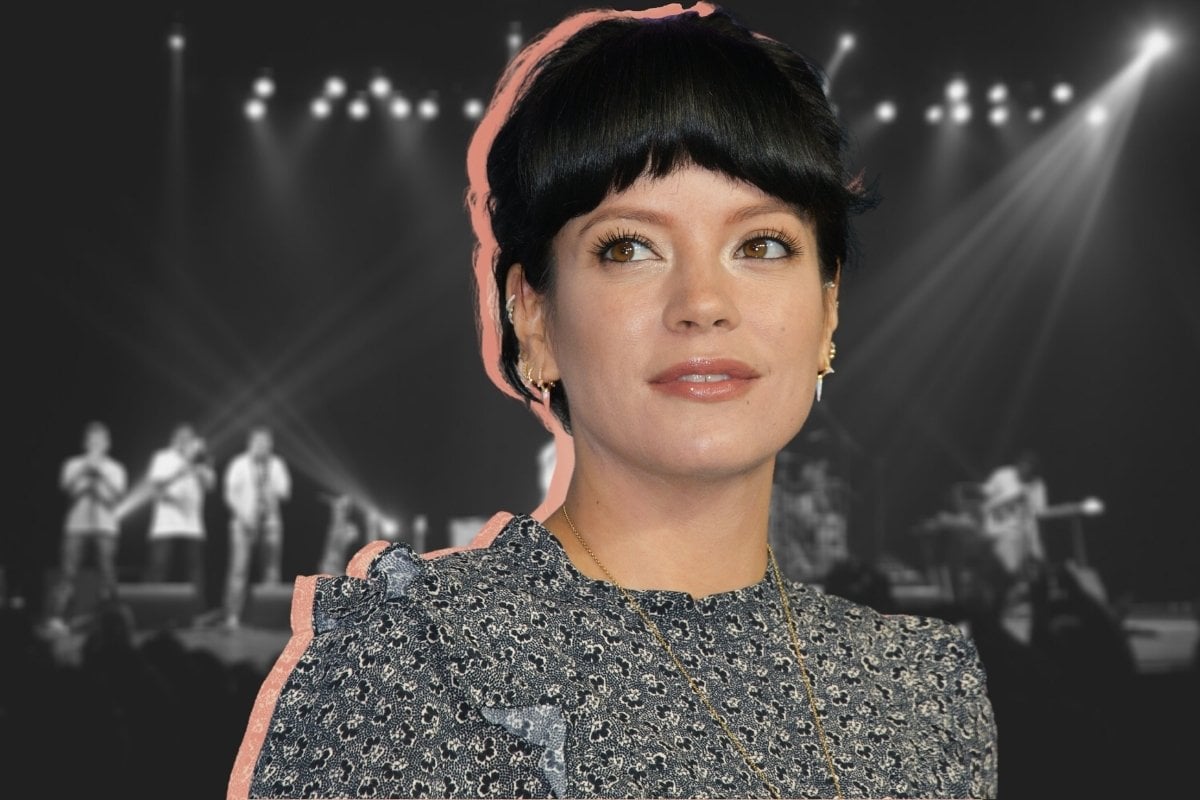 This article deals with accounts of pregnancy loss and addiction that could be triggering for some readers.

In 2014, Lily Allen contemplated doing something that could easily have changed the course of her life.

The British singer was the supporting act on Miley Cyrus' Bangerz Tour and, speaking to The Recovery podcast, she said it was an environment that left her feeling alienated, frustrated. Having recently had children, she felt divorced from the "highly sexualised" nature of the tour and struggled to reconcile her place within it.

"I was sort of like re-entering this phase of being a pop star again but not doing it on my terms anymore. I was supporting this girl who was much younger and more attractive than I felt," she said.

She started leaning on alcohol, abusing it, and cheating on her then-husband, Sam Cooper. Then, one night in California, came the tipping point.

"I remember being in LA," she said, "and thinking, like, 'None of this acting-out is working anymore. Maybe I should try heroin,'" she said. "[I] knew that when that thought popped into my head it was time to confront my demons."

Lily Allen speaks about cheating on her husband with female escorts on The Project. Post continues below video.

Allen had always had a complicated relationship with alcohol and drugs. She started drinking as a teenager at boarding school, and while she didn't enjoy the feeling of being drunk, she enjoyed the attention that came with it.

"And I think I became addicted or co-dependent at that point," she said, "because I started getting my value from [the] attention of others and that is something that has played out until relatively recently, really."

Once she rose to fame in 2006 with the release of her debut album Alright, Still, alcohol and drugs, particularly the prescription stimulant Adderall, offered an escape from the absurd tabloid criticism about her weight and singing ability. But it also deepened her feelings of worthlessness.

"I would spend my days, like, beating myself up and believing all of this stuff that was being written about me," she said, "and then I would, like, spend my nights proving it wrong in a hotel room with five other addicts."

She's sober now. But along the path to recovery were tragedies that tested her resolve, two broken relationships and another that's helping her heal.

But in January the following year, the 'Smile' singer shared that she had suffered a miscarriage.

They broke up shortly after, and Allen checked herself into a psychiatric ward.

In July 2009, Allen began dating Cooper, a builder and decorator.

But Allen experienced complications, including more than a week of heavy bleeding early in the pregnancy, and at the six-month mark, she contracted a viral infection that caused her to suffer a stillbirth.

In 2018 during in an interview for BBC Radio 4’s Woman’s Hour, Allen opened up about the traumatic delivery of her little boy, who she and Cooper named George.

Listen: Dr. Anne Coffey shares her personal experience with miscarriage and her advice on how to get the support you need. (Post continues below.)

"I went into early labour and they put a stitch in my cervix to try to stop that from developing, and that lasted for the best part of a week," she said.

"The stitch broke, and I went into full-blown labour, and the baby was really, really small,” she recalled. "And as I was delivering him, the doctors said, 'There was a pulse and now there no longer is.' The cord was wrapped around his neck and he was just too small."

"Because his skin wasn’t fully formed they couldn’t [use] forceps [to] pull him out.

"So there was a period of about 12 hours of lying there with him deceased in between my legs," she shared. "I went into trauma, and I don’t think I’ll ever really recover from that."

In another interview with The Guardian, Allen described walking out of her house a few weeks later into "torrential, biblical rain", to take off all her clothes, lie naked on the ground and howl.

"I don’t even know where that came from, I just found myself there – outside," she said. "Despair. It was horrendous."

Soon after George's stillbirth, Allen and Cooper became engaged while on holiday in Bali and married in England in June 2011.

In November 2011, Allen gave birth to daughter Ethel. She was born needing surgery for laryngomalacia and was unable to feed properly for eight months.

In 2014, Allen said she felt like George was part of Ethel.

"I just think that he's a part of my eldest, really. If he hadn't died, it wouldn't have physically been possible for our eldest to be alive because I got pregnant with her so quickly," she told the Huffington Post.

"We've got a little stone in our garden with his name on. And lots of different things that I do, rituals, I have him in my mind."

Allen and Cooper's second daughter Marnie was born in 2013.

With the release of her memoir My Thoughts Exactly in September 2018, Allen discussed her infidelity which led to the breakdown of her marriage in mid-2015.

Allen wrote that she had slept with female escorts during her 2014 Sheezus tour.

Discussing the story on The Project, Allen said with hindsight she could understand her damaging behaviour was "an outlet".

"I know now in retrospect what was going on, I think I had post-natal depression and my marriage was deteriorating. I found outlets to deal with all of that which were fun in the moment but not so fun the next day," she said.

"I was feeling incredibly lonely and sort of at my wits' end, and I was looking for anything, looking for an outlet, so it is not really like a salacious sex story.

"It is more about hotel rooms like the one that we are sitting in [for the interview], and being on my own and being very far away from my kids and my husband. It is not like steamy, raunchy – although that is what the tabloids have made it out to be like, a sort of lesbian prostitute sex romp, which I guess it was, in a way."

She and Cooper officially divorced in 2018 and now have an amicable relationship and share custody of their daughters, with each taking Ethel and Marnie for alternate weeks at a time.

For about three years after their separation, Allen dated British DJ MC Meridian Dan, real name Daniel Lawrence London, but they broke up in December 2018.

In 2019, she began dating Stranger Things actor David Harbour, after they met on the elite/celebrity dating app, Raya. He was working in London at the time, and they met for dinner at famous Mayfair restaurant, The Wolseley: "It was my first date ever. I had never been on a date! I was so anxious," she told The Sunday Times.

Clearly it went well. In 2020, they isolated together during London's COVID-19 lockdown and married in Las Vegas that September.

Speaking about the relationship to PEOPLE, Harbour described her as a "beautiful, incredible woman", and deeply kind.

"I have never met someone who is so deeply kind as her," he said. "I’ve never felt so taken care of and cared for by another human being. She really is just a deeply kind individual and I love that about her."

Allen, who is now sober, is embracing her new life with her family.

"[I'm] in the process of, breaking that cycle, you know? I felt so guilty about neglecting my kids in those early years of their life and having to go off on tour and misbehave in the way that I was," she told The Recovery.

"I really have, like, a great relationship with my kids now. I'm there to pick them up at the school gates whenever I can be, and I'm off dropping them off in the morning, and I'll make them dinner, and they'll come to me when they've got problems, and that's, like, golden to me."

If this article has raised any issues for you or if you would like to speak with someone, please contact the SANDS Australia 24-hour support line on 1300 072 637.

This article was originally published in April 2020 and has been updated with new information.