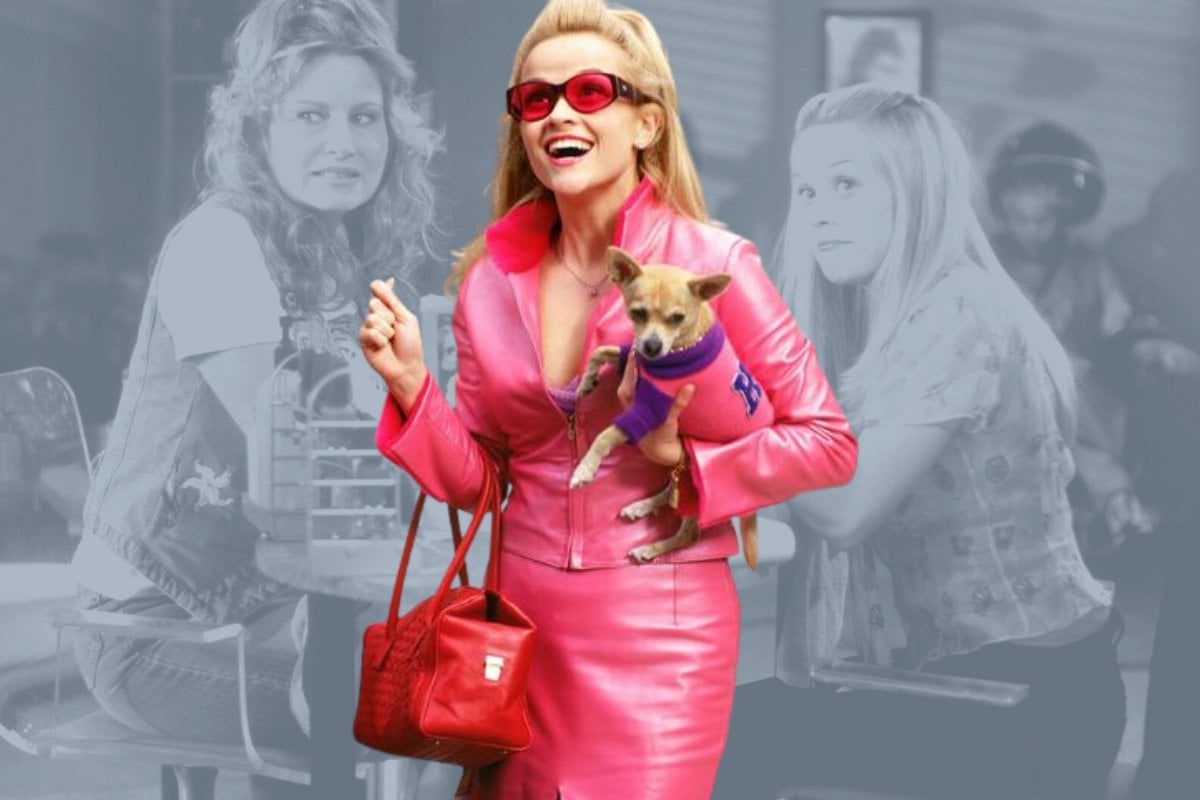 Legally Blonde is one of those movies so firmly wedged in pop culture, that you can whip out a quote from it at any moment and it'll be received with a good hard giggle and a solid whack of nostalgia.

Arguably Reese Witherspoon's most iconic role, the story of Elle Woods has stretched to a second film, an award-winning broadway musical and even has the likes of Kim Kardashian dressing up as the character for Halloween.

This week is the 20th anniversary of Legally Blonde hitting our screens for the very first time. And to celebrate, Reese Witherspoon shared some never-before-seen snaps from on-set.

"Omigod you guys... #LegallyBlonde premiered 20 years ago TODAY! Time flies when you're busy using legal jargon in your everyday life," she wrote underneath the photos.

"But truly... playing Elle Woods was the role of a lifetime and I'm so honoured to have been a part of sharing her story with you all."

Now, for a movie so well known, and so widely loved, there's a whole heap of weird and wonderful facts about Legally Blonde that we're sure even superfans wouldn't know about.

So, in honour of the film's 20th anniversary, here are 12 things you never, ever knew about Legally Blonde.

1. There was meant to be an entirely different ending to Legally Blonde.

In an interview with Entertainment Weekly, the film’s co-writer Karen McCullah confessed the moving graduation scene at the close of the movie wasn’t exactly part of the OG plot.

"Originally it ended at the courthouse right after the trial," she told the magazine.

"Everyone was congratulating Elle, and Emmett came up and gave her a big kiss. Then there was a tag where it was a year in the future and she and Vivian, who was now blonde, had started the 'Blonde Legal Defence Fund' and they were in the quad handing out pamphlets."

However, when they aired this to their test audiences (which is a select group of viewers who get to watch and review the movie before it heads to the cinemas), the response was... lacklustre.

In fact, they said the kiss between Elle and Emmett made the whole movie feel "like a rom-com".

"They knew that this was not a movie about a girl getting a guy," Karen said. "The test-screening audience didn’t feel like it was an exciting enough ending for [Elle], success-wise."

So, a new ending was promptly written which featured the now-iconic graduation speech and Elle's epic takedown of her ex-boyfriend Warner.

2. The Legally Blonde ending we know and love had to be shot remotely from thousands of miles away.

Once the new ending was written, it obviously had to be re-shot.

But there was just one problem: Witherspoon was already in England shooting a new movie, The Importance of Being Earnest, and had chopped her character’s long, blonde hair after it became "damaged from all the hot rollers".

For the reshoot, Witherspoon had to wear a wig - alongside Luke Wilson, who played Emmett, as he had shaved his head for his role in The Royal Tenenbaums. 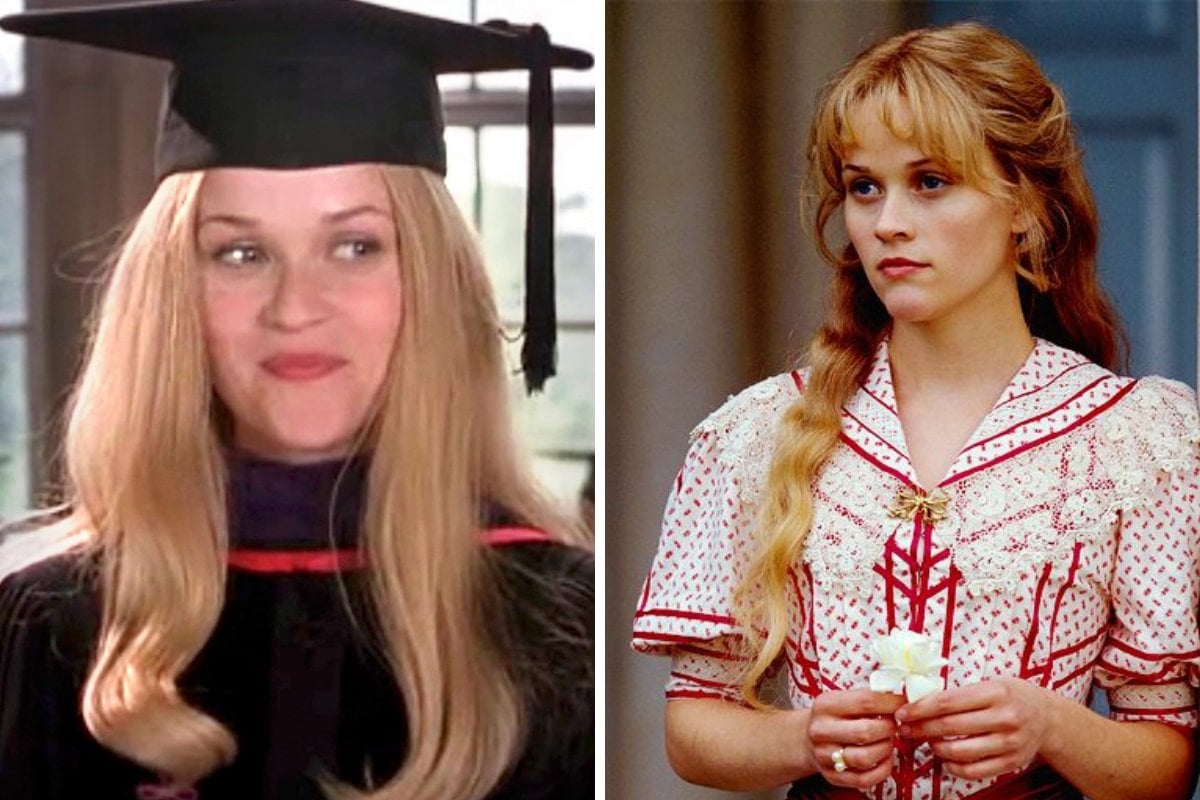 The iconic graduation scene had to be shot in two entirely different locations. Elle's speech was captured in London with Witherspoon and the crowd's reaction shots in a soundstage in California.

While it was professionally done, once you know this fact and you go back to watch the ending, it's kinda obvious.

3. Reese Witherspoon was not the first pick to play Elle Woods in Legally Blonde.

Obviously there's absolutely no doubt that no one else could pull off a bend and snap like Reese Witherspoon, but fans would be shocked to learn that she was never the top pick to play Elle.

In fact, the movie's directors had their eye on another actress instead: Christina Applegate. 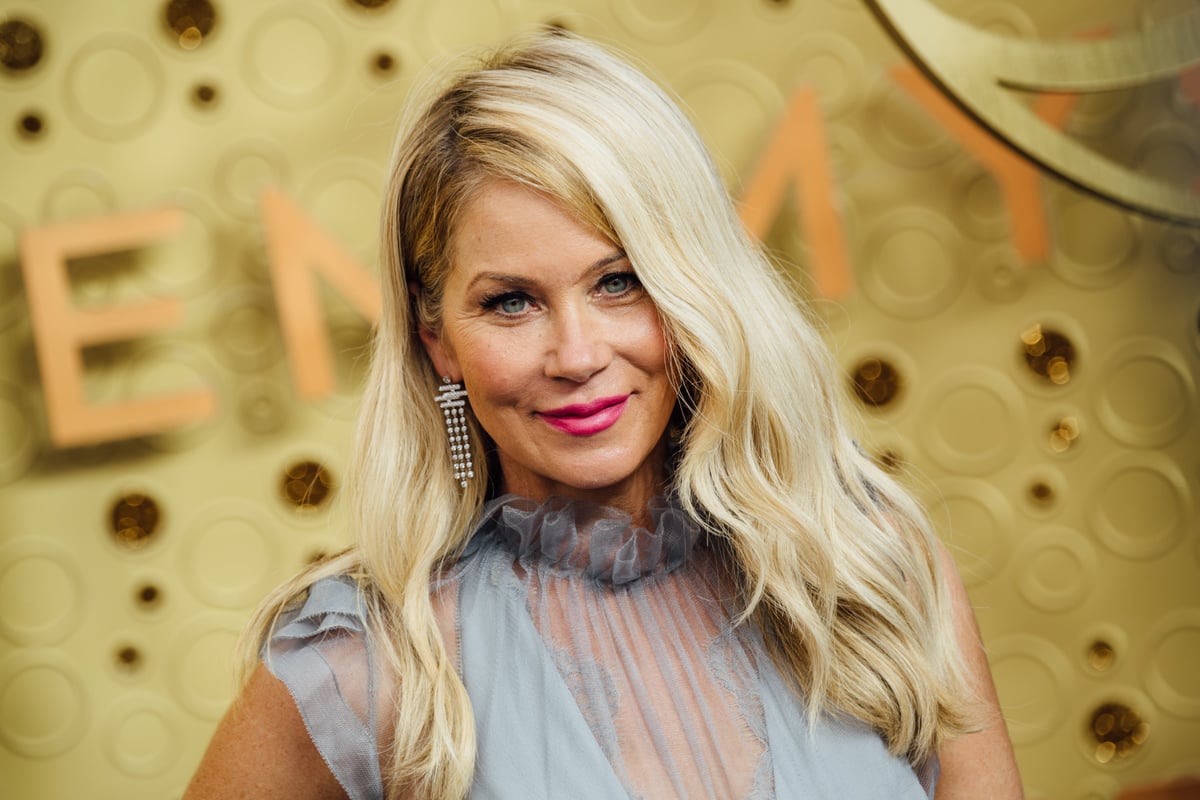 However, Applegate turned down the role - which we're sure she's kicking herself for doing now.

At the time the news came to light that she was the favourite to play Elle Woods, Applegate spoke to New York Daily News saying:

"I kept getting sent scripts for dumb blondes. And here’s one of my biggest regrets: one of those was Legally Blonde. I just didn’t want to play a dumb blonde again. Well, that was stupid."

While it's hard to imagine anyone other than Selma Blair as Vivian, the role was originally held for Chloë Sevigny. 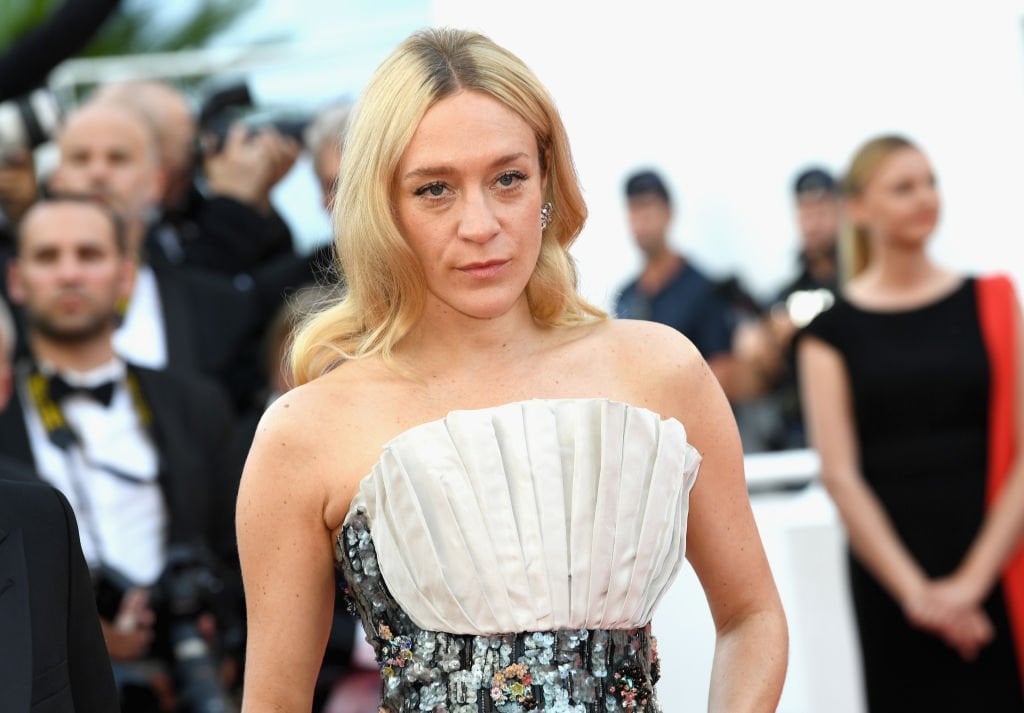 Sevigny told The Daily Beast in 2014 she turned down the part as she'd already signed onto the thriller movie Demonlover, which had clashing shooting schedules.

We've honestly never heard of Demonlover, but it definitely doesn't sound as much of a hoot as Legally Blonde.

5. Elle Woods was indeed named after the fashion magazine.

You may not know that Legally Blonde is actually based on a book of the same name, written by author Amanda Brown.

Brown attended Stanford Law School herself and was often seen in the quadrangles of campus, flicking through editions of Elle magazine while writing letters home to her family, bitching about her classmates who she simply couldn't relate to.

In short, she was Elle Woods IRL.

Fun fact: The bitchy letters became the foundation of a manuscript (that would later become Legally Blonde), and Brown sent the original manuscript to publishing agents on bright pink paper. A classic Elle Woods move.

6. The iconic "bend and snap" was a drunken suggestion.

What would Legally Blonde be without the "bend and snap" scene? We dread to think.

Producers of the movie really wanted a scene for Jennifer Coolidge (who played Paulette), but were really stuck on what to do. At first, it was going to be about a robbery or a crime, but then the cowriters Karen McCullah and cowriter Kirsten Smith got drunk at a bar together and came up with a much better idea.

According to Entertainment Weekly, McCullah asked Smith, "What if Elle shows [Paulette] a move so she can get the UPS guy?" and Smith - a couple of bevvys deep - came up with the now-famous move right there and then by the bar. 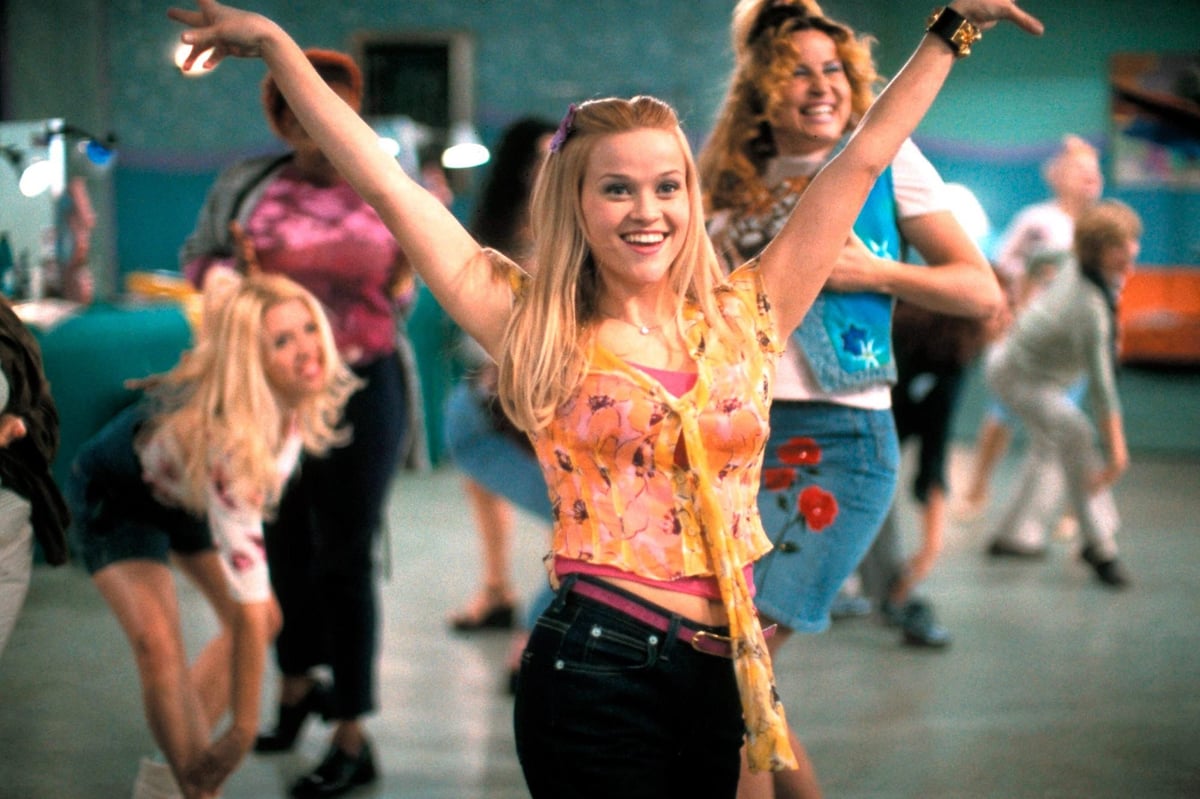 7. Reese Witherspoon hung out with actual sorority girls to 'research'.

Now this is method acting we can get around.

Witherspoon told Entertainment Weekly back in 2001 she spent a heck of a lot of time with real-life sorority members in order to properly research the role.

"I went to dinner with them. It's sort of like an anthropological study. You learn what they eat, how they behave, how they take care of their young, that sort of thing," said Witherspoon.

It clearly paid off, with Witherspoon being a total natural in that rather frightening world of campus sororities.

8. Matthew Davis had a big crush on Reese Witherspoon.

In news that would probably shock no one, Matthew Davis (who played Warner) had a bit of a massive crush on Reese Witherspoon.

In a 2001 interview with Movieline, he admitted he'd had a 'thing' for her since he was 15 years old.

Due to said crush, he admitted he acted like a "bumbling idiot" around her on set - so much so that producers pulled him aside to ask if he was alright. 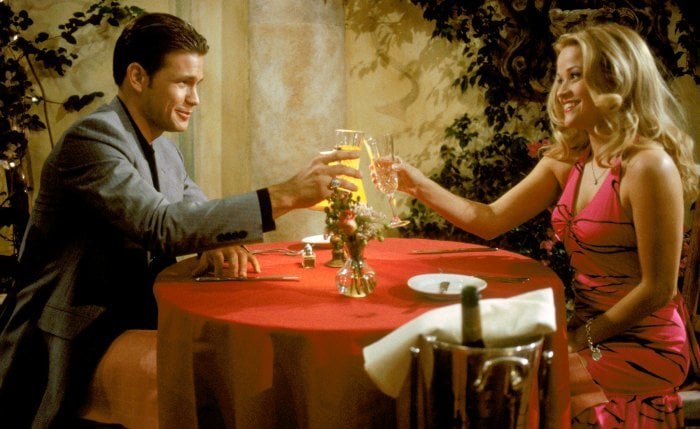 He eventually mustered up the courage to tell Witherspoon - who, by the way, was married to Ryan Phillippe at the time. "She was like, 'That's so sweet! OK, let's work on the scene,'" Davis recalls.

9. ...But Matthew Davis also kinda had a crush on someone else in Legally Blonde too.

In a strange twist of fate, Witherspoon wasn't the only lady Davis had eyes for on the Legally Blonde set. Yup, he also fancied the pants off Selma Blair.

Speaking to news.com.au back in 2017 about it all, Davis said the following:

"I absolutely loved and adored Selma. I developed a crush on her at the time but she was with someone else — I think she was dating the guy from Rushmore [actor Jason Schwartzman] but he was coming around and I was kind of like 'who is this guy?!'"

We can confirm that Davis ended up with neither Witherspoon nor Blair.

10. Jennifer Coolidge had a crush on the UPS delivery man.

Another crush that surprises precisely no one: Jennifer Coolidge had the hots for Bruce Thomas, her co-star who played the UPS delivery man and later husband in the film. 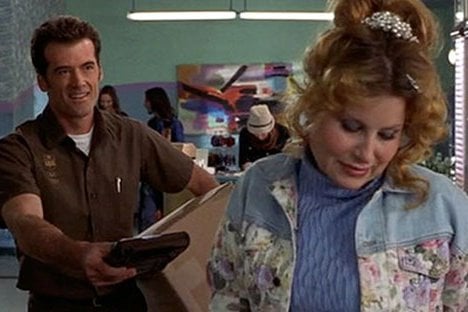 "I had a crush on [Bruce Thomas, who played] my UPS man," Coolidge told New York Post.

"But he was married and had a beautiful wife and children, so I had to shut that off. I didn’t have to act or get excited when he walked in — it was all true to life."

11. The script was originally entirely different.

While these days, Legally Blonde is considered a feminist masterpiece, the original script was far from it.

"The first script was very raunchy, to be honest, in the vein of American Pie," Jessica Cauffiel - who played Margot - told New York Post.

"What we know now as Legally Blonde, and what it began as are two completely different films. It transformed from nonstop zingers that were very adult in nature to this universal story of overcoming adversity by being oneself."

12. Reese Witherspoon got to keep all 60 of Elle's outfits from the film.

Legally Blonde launched a thousand meme-able outfits, from Elle's glittery bikini from her Havard application video, to her fuchsia leather suit and every other pink frock to boot.

So, we're delighted to report Reese Witherspoon is still the owner of every single look.

And sometimes, when she wants to make our day, she takes a trip down memory lane (to her closet) and tries them all on. 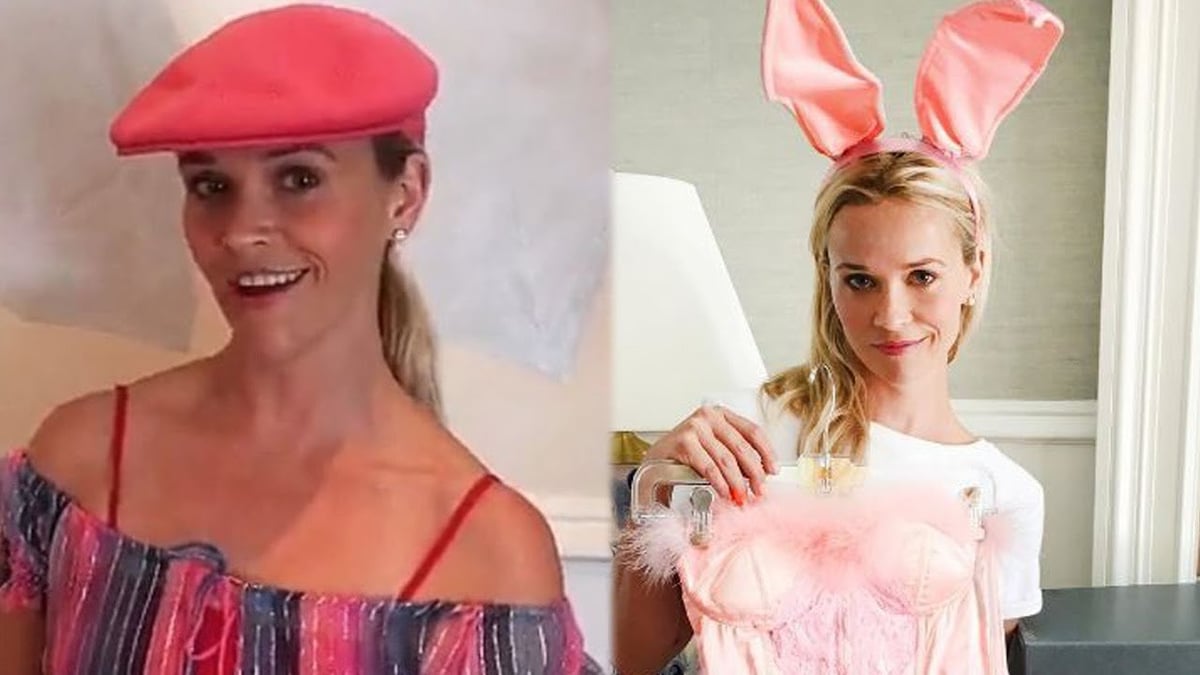 But the reason Witherspoon kept all the outfits is actually because she was worried about them being sold on the internet to weirdos.

Speaking to Hollywood.com she said, "It really bothers me. Imagine some sicko in Wisconsin smelling the seams… it creeps me out. It's all in the closet. One day my daughter can play with it."

This post was originally published on May 3, 2021, and updated with new information.