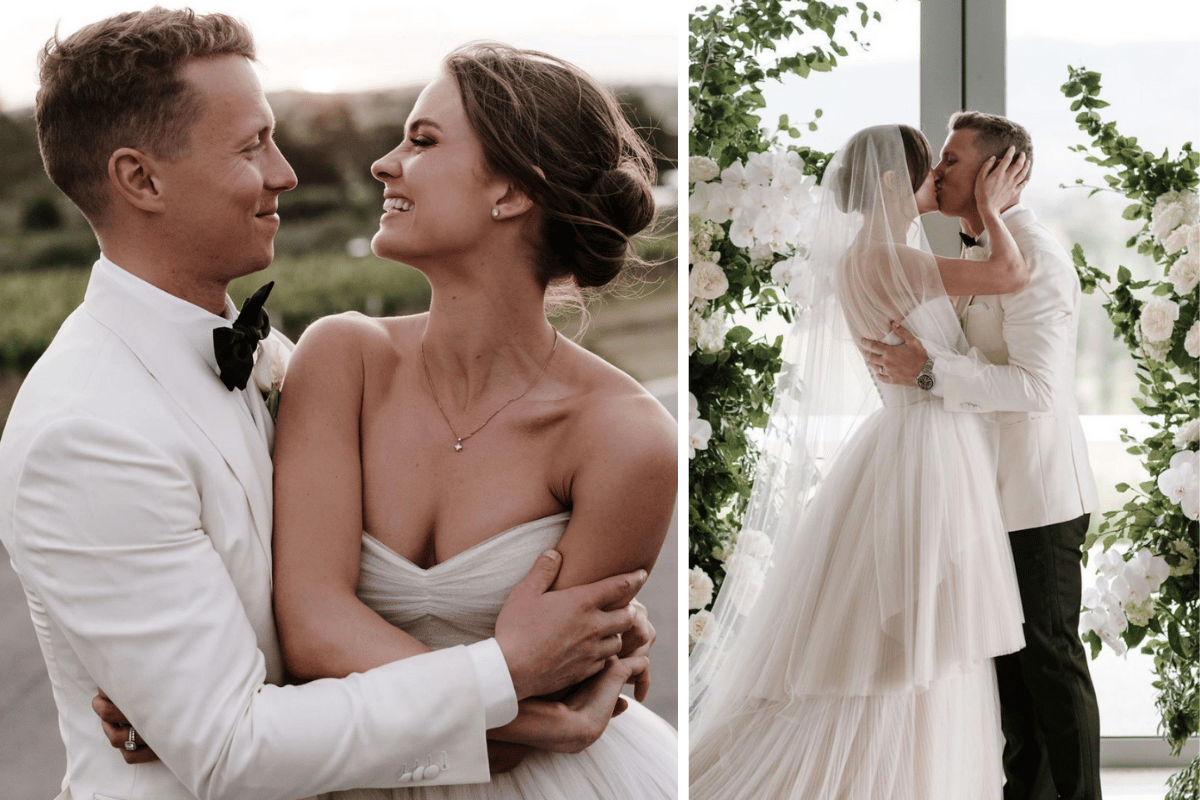 After having to call off their wedding three times due to COVID and lockdowns, it was the fourth time lucky for Laura and Dalton Henshaw last week, who celebrated their marriage in the Yarra Valley.

Laura Henshaw, who is the co-founder of holistic fitness and wellbeing program Keep It Cleaner, has shared countless stunning images of the big day including pictures of her wedding dress, their first dance, the bridesmaids and even their two dogs dressed in matching bow ties.

But what particularly grabbed the attention of people was Laura's caption on her post, which read "Mr & Mrs Henshaw 26.11.21 #TheHenshaws".

It was namely the fact that her husband Dalton had chosen to take Laura's surname, and it caused a reaction Laura tells Mamamia she was surprised to see.

"As we looked at what was 'traditional' in weddings, so many of the things didn't feel true to us," Laura said.

Initially, Laura offered to take Dalton's last name, Graham. However Dalton says he knew how much Laura's last name meant to her, and that it was such an important part of her brand and the career she has worked so hard for. The couple even toyed up the idea of hyphenating their last names. But then Dalton posed the question, "Why can't I take your name?"

Laura told Mamamia, "When he suggested taking my name, it meant more than I could put into words for me. Dalton is such an incredible rock for me in my career, we both run our own businesses, and his support is unwavering in his belief in me achieving my goals."

She continued, "Dalton’s family and his family name, is still a part of who he is as Dalton Henshaw. It is such a personal decision and we made it for us, not for anyone else. It is what felt right."

Prior to the conversation of surnames, Laura says the idea that a man would take her name hadn't crossed her mind.

"Like most people I just assumed (when I was younger) my husband-to-be wouldn’t take my name. It's funny how with traditions and ways of thinking, we don’t often question them, but if we always thought this way, there would never be any change. And change is so important."

The stats speak for themselves: approximately 80 per cent of women take their husband's name after marriage.

As for why the tradition even exists, Associate Professor at Flinders University, Yvonne Corcoran-Nantes, told ABC that it goes back centuries.

"It has a very long history. It has to do with inheritance and property, dating back to when women were property, seen to be as good as [their husband]. You were actually taken into the husband's family and therefore you would take his name," Professor Corcoran-Nantes said.

When it comes to queer and same-sex couples deciding whose surname to take, hetero-normative traditions can be thrown out the window.

As one same-sex couple, Carol and Liz, told Mamamia, "the options are endless".

"We both have our ex-husband's last names which is weird, but it's a tie to our respective children from those marriages. I think when or if we are to get married, we'd create a new one as going back to the maiden names doesn't feel right either," Carol says.

"Our friends, who are also in a same-sex relationship, chose to hyphenate their last names. I also know of two gay dads who chose to do the same thing, as that way their kids have a 'family name'. But for hetero couples, I love the idea of men choosing their wife's last name: why not!" Carol noted.

Listen to Mamamia Out Loud: on this episode the ladies discuss why everyone is talking about an Aussie influencer's wedding... specifically, a fresh twist on an old tradition. Post continues after audio.

For Laura, herself and Dalton say they were "really surprised by the response and the use of the term 'ground-breaking'," when discussing their surname decision.

But the irony is that by breaking the age-old tradition, this heterosexual couple have in fact done something pretty 'ground-breaking'.

"I think what has been amazing is that other people may have the conversation with their partner, and not just assume they will take their name or vice versa because of their gender. Every single couple and person is unique, and so the decision should be something they feel empowered to make together: not something that is already made for them because everyone has done the same," Laura notes.

"There is no right or wrong blanket decision or rule, it just needs to be what feels right in your relationship and for your life."

As soon as Laura and Dalton began sharing images from their wedding, the reaction from people and media coverage was enormous. With this in mind, Laura says she is grateful the reaction has been mostly positive.

"There has been some commentary on Instagram about masculinity, both negative and positive which I have found really interesting. Someone’s decision to take on their partner’s surname does not make them more or less masculine or more or less feminine. Now living in 2021, I thought that would be something we would be okay with," she said.

From Dalton's own family, Laura says they were surprised but also accepting.

"Dalton comes from a very traditional family, and so it was definitely a hard conversation because it was such a shock. But after chatting through the reasoning, his family understood his decision. I think this was something Dalt expected though, and understood would happen," Laura shared with Mamamia.

"When we told most of our friends they said 'cool, that is awesome,' and didn’t really question it at all! I think they knew it was us, and as long as it worked for us, that is all that mattered."

As Dalton so perfectly put it in an Instagram post, "You can still call me, Dalton, Dalt, Dolphin, whatever you like… I'm still the same me and always will be, just going to sign off one chapter and start another with my beautiful, driven and inspirational wife by my side as, Mr Henshaw."