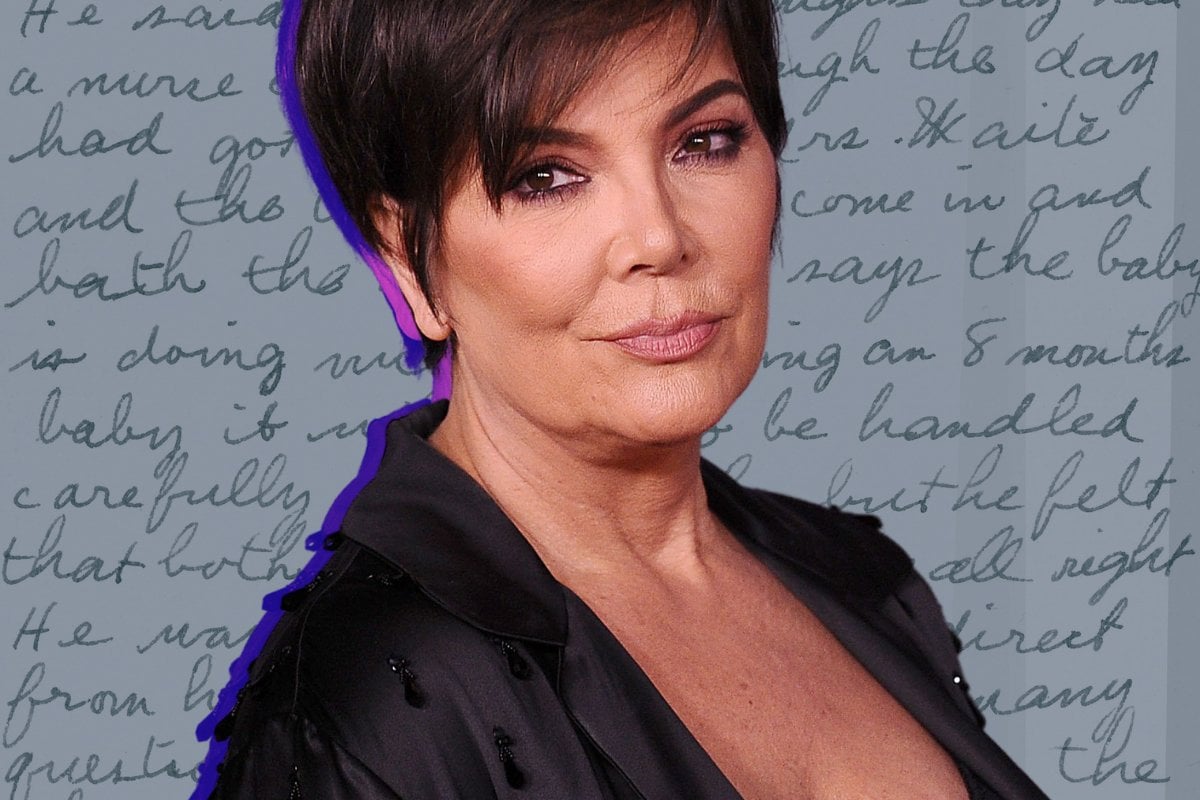 What a fckn day.

Kim keeps (ugly) crying because someone leaked her separation from Kanye to the press.

In unrelated news, I visited the offices ofTMZ this morning wearing a long red wig and sunglasses and a prosthetic nose and just whispered in the ear of the receptionist: "Code red. I repeat, code red. Kim and Kanye are done."

The receptionist said something about how she's not a reporter, but she's pretty sure you need records to be able to publish that kind of thing, at which point I retrieved the separation papers from my satchel and slid them across the desk.

She asked for my name and I said in a Spanish accent (so she wouldn't know my true identity) "a source close to the family" and then I saluted her and turned on my heels.

Reminiscing about the time Kylie gave birth. Post continues below.

But I knew that wasn't enough.

So I called E!, People magazine, the New York Post etc. etc. and sprinkled some more details in there about how Kanye is a bit "anxious and sad it's over".

Kim keeps saying, "Who would DO such a thing?" and looking slyly in my direction which is rude but also accusatory.

At one point she got up to go to the toilet and I mumbled to Kourtney, Khloe, Kylie and Kendall, "Well, the news can't hurt with Keeping Up With The Kardashians premiering in a few weeks..."

They all started shouting, and I was all like, "SOMEONE HAD TO SAY IT" and now they've confiscated my phone for the rest of the evening.

What they might have missed is that last season our ratings were seriously down. Not a single person got a divorce or lost a diamond earring in Bora Bora. I took one for the team a few seasons ago, as have Khloe, Kourtney etc. etc.

And I'd like to say that Kim made the choice to separate from Kanye for the greater good of the show, but that wouldn't be true.

I can pinpoint the exact moment things went downhill for their relationship, and, yeah, you better believe it was that time Kanye publicly called me "Kris Jong Un" and everyone laughed.

No one, and I repeat no one, compares Kris Jenner to a communist dictator with a frankly revolting haircut.

That's when I started undoing their marriage. Hiding the remote in the washing machine and saying Kanye did it. Leaving fake tan stains on their white sheets and telling Kanye that Kim did it. Real f**ked up s**t. I even told Kanye that Kim had never heard the song 'Gold Digger' before, and then I told Kim that Kanye said her Skims collection was "stupid".

If the Presidential Medal of Freedom went to the hardest working people in this great country of America, it wouldn't be going to Bill Gates and Oprah Winfrey.

It would be going to Mrs. Kristen. Mary. Jenner.

Have a listen to my favourite podcast, Mamamia Out Loud. Post continues below.

Look I didn't start this saying (yes I did) but I very much believe it to be true: The devil works hard but Kris Jenner works harder.

I am on the phone to paps, telling them where exactly Khloe is today. Liking Kendall's Insta pics. Buying Kylie's lipsticks, even when they don't suit me. Turning Kourtney's life into chaos so it makes for good television. Posting pics like this of Kim on my account, which is honestly a weird thing for a mother to do.

This is literally a 24 hour a day job. And even though I'm worth around $190 million last time I checked, I just don't get enough credit. Culturally or politically.

Anyway, I need to sleep. There are divorce papers to be scanned and sent to the magazines etc. If Kim doesn't stop crying I'm going to have to call the Keeping Up With The Kardashians television crew so we can add in a few more scenes. The gifs that will be made out of that woman's face... honestly it's priceless.

Next on my to do list: Pin a (petty) crime on Kylie.

Literally no one would expect it.