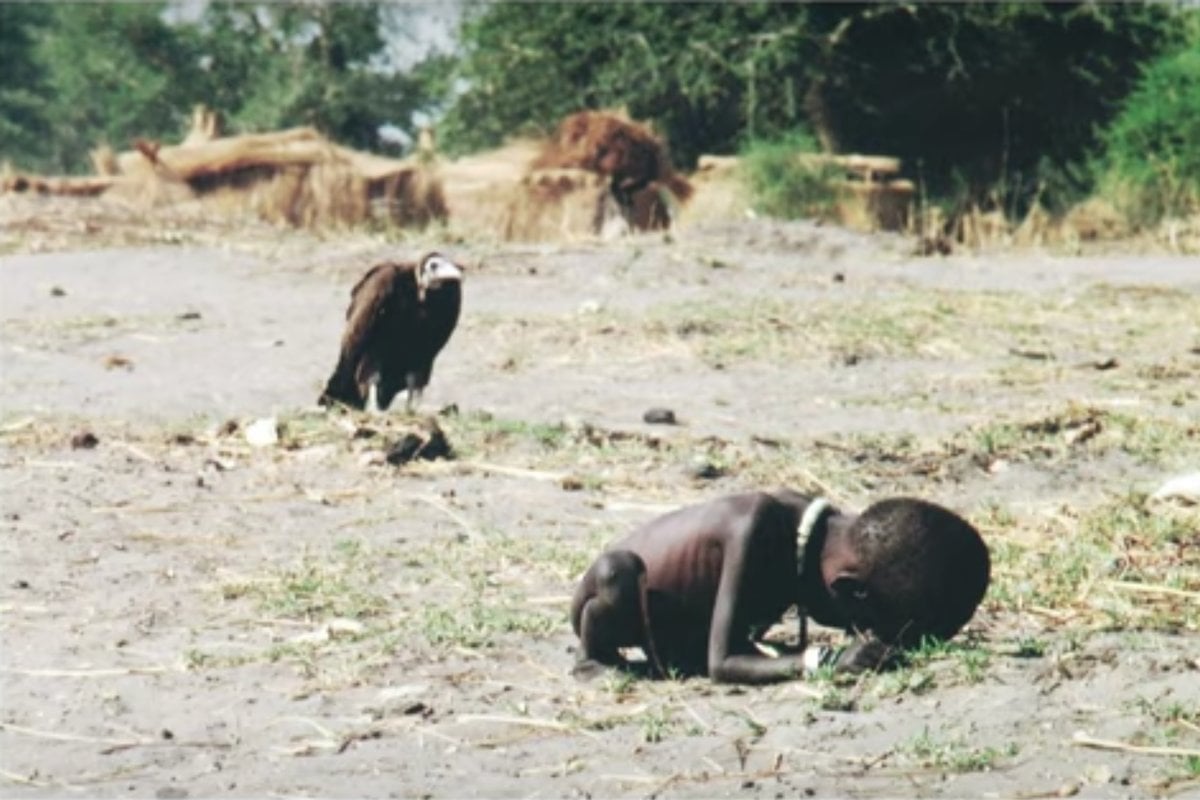 It is one of the most haunting photographs ever taken. A starving Sudanese toddler, arms and legs barely more than bones, huddles on the parched dirt, too weak to move. Nearby, a vulture watches and waits.

The photo, known as The Vulture And The Little Girl, was taken by Kevin Carter in 1993. It won him a Pulitzer Prize. But just four months after he was awarded the prestigious honour, he died by suicide. He was 33.

"I'm really, really sorry," he wrote in a note he left behind. “The pain of life overrides the joy to the point that joy does not exist." 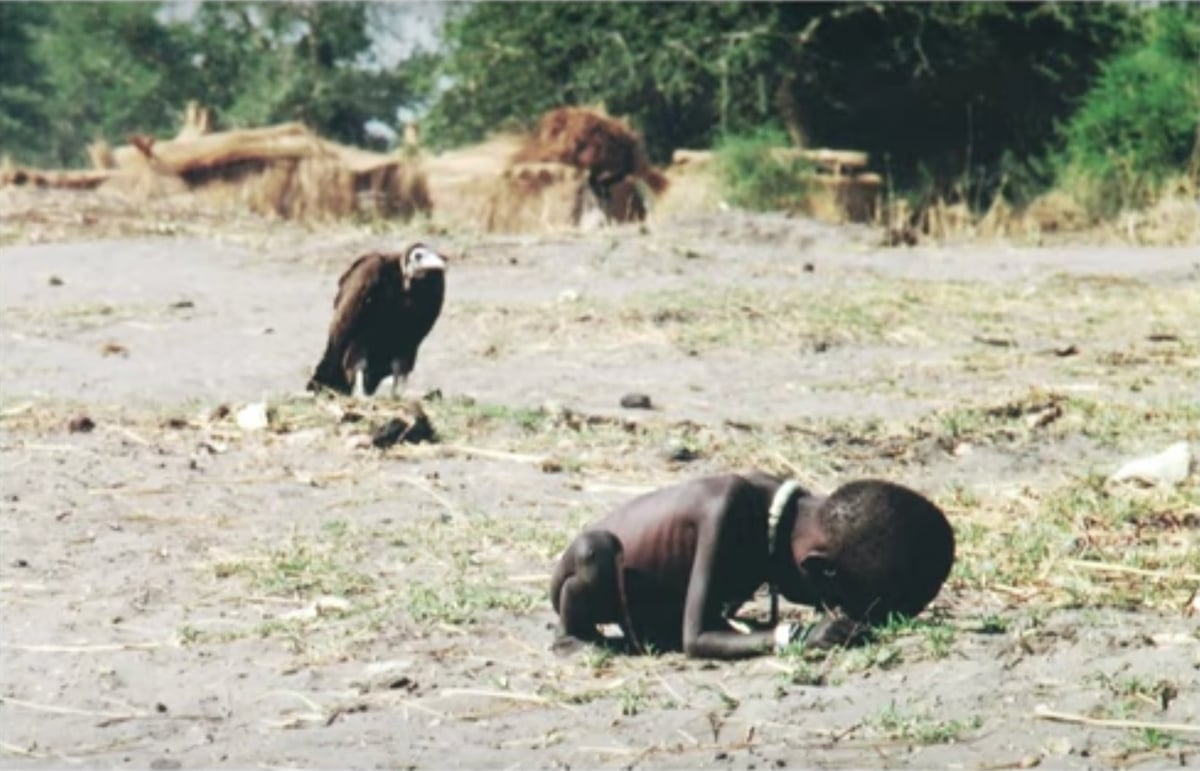 Image: Kevin Carter/Megan Patricia Carter Trust, Sygma - Corbis (edited)  So who was Carter and what led up to him taking his own life?

Carter was born in South Africa. His parents were of English origin, and he lived in a well-off suburb of Johannesburg. But growing up, he was disturbed by the way he saw police treating black people. His mother Roma remembers him getting very angry about it.

“He used to have arguments with his father: 'Why couldn't we do something about it? Why didn't we go shout at those police?’” she told Time.

Carter started studying pharmacy, but dropped out and was conscripted into the South African Defence Force. He hated it, and fled to Durban to become a DJ. After losing his job, he took an overdose of pills along with rat poison, but it wasn’t enough to kill him. He finished his service, found a job at a camera shop, and from there, got into photojournalism.

Carter was one of a group of young white photojournalists who were willing to risk their lives to expose the violence raging in South Africa. He and three others – his best friend Ken Oosterbroek, Greg Marinovich and Joao Silva – were known as “the Bang-Bang Club”.

Carter had a string of brief relationships, including one that produced a daughter, Megan. He also smoked the “white pipe”, a mix of marijuana and a sedative known as Mandrax.

When one member of the Bang-Bang Club, Marinovich, won a Pulitzer Prize for his photos of a stabbing, Carter felt he needed to prove himself.

In 1993, he borrowed money for a plane ticket, and he and Silva headed to Sudan, a country stricken by famine, to take photos of rebel fighters.

Instead, when they arrived at a village called Ayod, Carter began photographing starving people near a feeding centre. Heading away from the crowds, into the bush, Carter saw a young child trying to get to the centre. As he was about to take the photo, a vulture landed behind her.

Carter waited for 20 minutes to see if the vulture would spread its wings, to make a better photo. When it didn’t, he snapped the shot, then walked off, sat under a tree and cried.

"He was depressed afterward," Silva told Time. "He kept saying he wanted to hug his daughter."

Carter stayed just one more day in Sudan before flying home. The New York Times happened to be looking for photos of the famine in Sudan, and they published his shot of the child and the vulture on March 26, 1993. It sparked a huge reaction among readers, with hundreds contacting the newspaper, asking what had happened to the little girl.

The newspaper published a follow-up a few days later: “The photographer reports that she recovered enough to resume her trek after the vulture was chased away. It is not known whether she reached the [feeding] centre.”

Carter had made his mark. But privately, he was struggling. He was using drugs more heavily, and his latest girlfriend had ended their relationship. He was arrested after crashing his car into a house.

In April 1994, the New York Times rang Carter with some great news: he’d won the Pulitzer Prize for his photo.

Just a week later, tragedy hit. Carter and the rest of the Bang-Bang Club travelled to a township one morning to get photos of a new outbreak of violence. Carter came home early. Listening to the radio later that day, he heard that his best friend Oosterbroek had been killed and Marinovich seriously injured.

He was devastated, telling people that he should have died instead of Oosterbroek.

Carter went to New York, where he was praised for his photo but also criticised.

"The man adjusting his lens to take just the right frame of her suffering might just as well be a predator, another vulture on the scene," said Florida newspaper the St Petersburg Times.

Carter’s friend, Judith Matliff, later said he was “tormented” by people saying he should have helped the girl.

“Not our job, and there were aid workers nearby,” she insisted.

When Carter returned to South Africa, he kept working as a photojournalist, but he was struggling more than ever.

"People were calling him for assignments and he just couldn't get out of bed," Matliff explained in the documentary The Death of Kevin Carter: Casualty of the Bang Bang Club.

Carter made a series of professional blunders. In the final one, Time sent him to Mozambique on assignment, but after getting home, he realised he’d left the undeveloped film on the plane. It was gone. His friend, Reedwan Vally, describes in The Death of Kevin Carter how upset he was about it.

Vally didn’t believe him. But just days later, on July 27, after visiting Oosterbroek’s widow Monica, Carter took his own life. He left a long note, explaining that he was depressed and short of money for things like rent, child support and debts. He went on to say that he couldn’t get the horrific things he’d seen out of his mind.

“I am haunted by the vivid memories of killings & corpses & anger & pain… of starving or wounded children, of trigger-happy madmen, often police, of killer executioners…”

After Carter’s death, numerous pieces were written, trying to explain why the photojournalist had taken his own life after achieving such success.

His sister, Patricia Gird Randburg, wrote to Time, to set the record straight about her brother.

“He was an incredible father to Megan and a man who grappled deeply with issues most people just accept,” she said. “The pain of his mission to open the eyes of the world to so many of the issues and injustices that tore at his own soul eventually got to him.”

She talked about the pressure he was under, and how hard he’d been hit by the loss of Oosterbroek, but rejected the idea that winning the Pulitzer Prize had sent him “deeper into anguish”.

“If anything, it was a confirmation that his work had all been worthwhile,” she added.

And what about the little girl in the photo? What happened to her? Did she live a happier life than the man who photographed her?

In 2011, a journalist travelled to Sudan and tracked down the father of the child in the photo. As it turns out, the child was not a girl, but a boy, and his name was Kong Nyong. He had made it to the feeding centre and survived. But tragically, Kong Nyong had died in 2007 from “fevers”.

Reply
Upvote
I remember learning about him after hearing the Manic Street Preachers song about him in the late 90’s.
mamamia-user-459038664 3 months ago