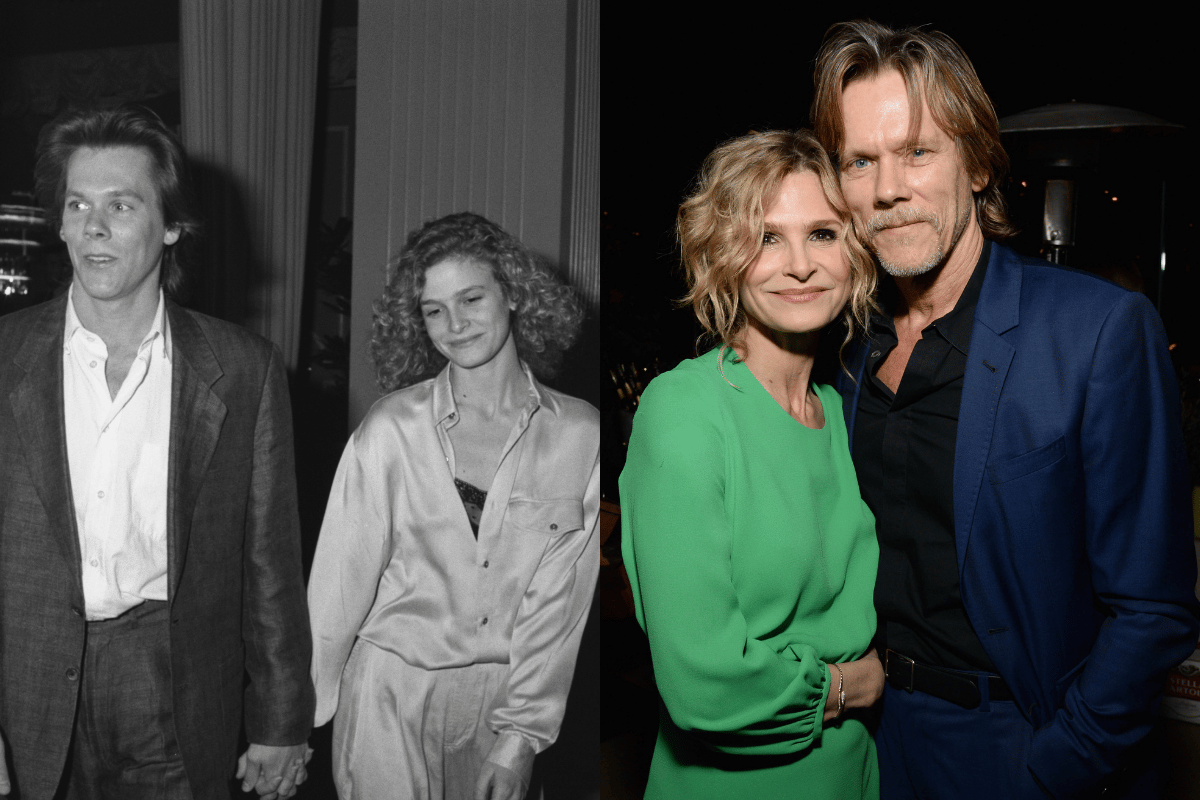 When actors Kevin Bacon and Kyra Sedgwick met for the first time, she was a shy 12-year-old fan, and he was 19 having just wrapped up a major play.

"A little girl was in there who had just seen the matinee, and her brother said, 'you liked that actor, go tell him you liked him,' and it was Kyra," Bacon recalled on The Late Late Show with Craig Ferguson in 2014.

Their brief and fleeting encounter wouldn't mean much until they met again about a decade later in 1987, where they both worked on the film Lemon Sky.

Watch The celebrity couples we forgot about. Post continues after video.

Now, after 34 years together, two children and a marriage that has defied the clutches of Hollywood fame, the pair are still as in love as ever.

Let's take a look back at their relationship, shall we?

How did Kevin Bacon and Kyra Sedgwick meet?

In 1987, the pair worked on the film Lemon Sky together, and despite Sedwick's former fondness of his work, she wasn't too much of a fan of him on set.

In Sedgwick's own words, she recalled him being "cocky" after watching him board a van to their movie set, later admitting she was initially put off by his appearance and demeanour.

"He definitely wasn’t my type. In fact, I vividly remember looking at his butt when he walked away after we first met and thinking, 'Well, I guess some girls like that,'" she told Redbook in 2008. 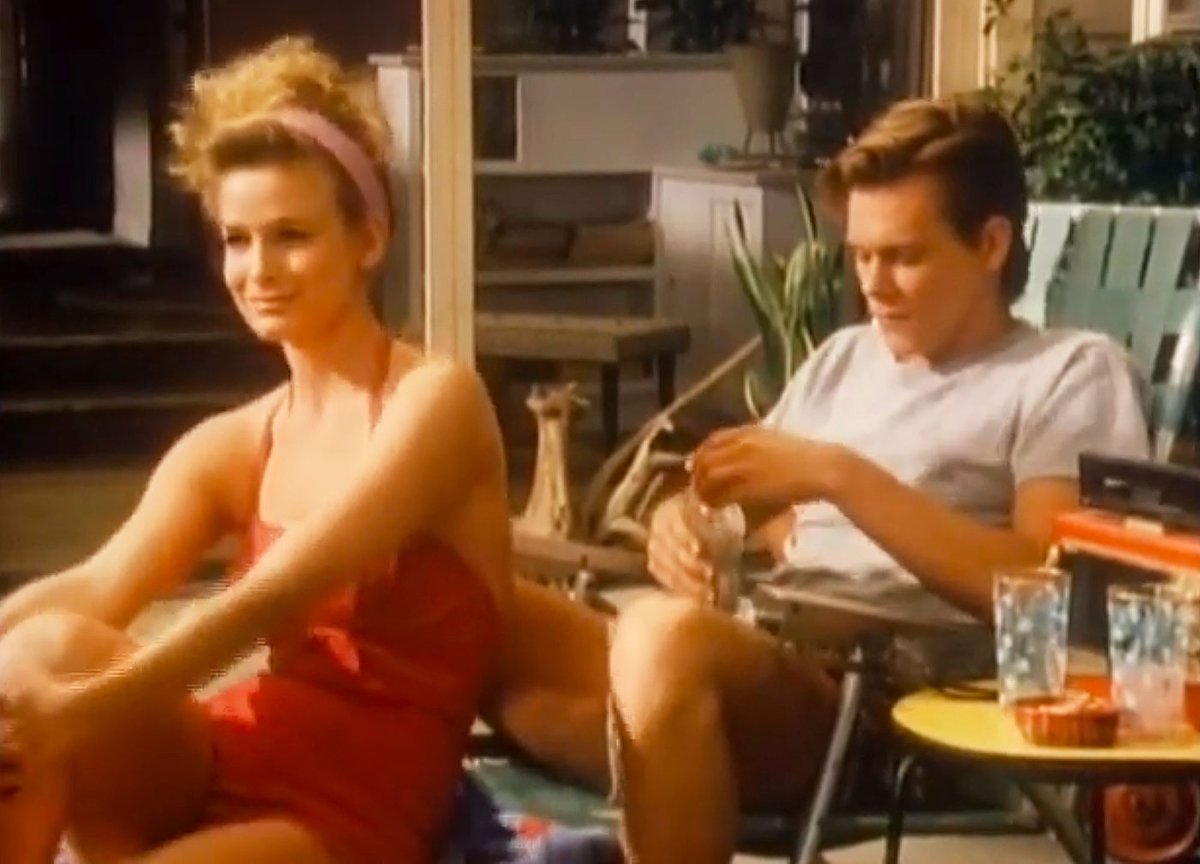 Despite Sedgwick's disinterest, Bacon would not be deterred.

"He was very friendly and sweet and every night after work he would say, ‘Who wants to go out to dinner?' And the whole cast would say yes except for me," she told Conan O'Brien in 2012. "And later on he told me that the only person he wanted to say yes was me and I never said yes and he was always stuck with the check, poor guy."

Even then - in spite of the actor's coldness towards her co-star - their relationship began to take a turn for the better, all thanks to a cheesy pick up line.

While filming an oil scene for Lemon Sky, Sedwick explained: "He said to me, 'You know you're really tight. Have you ever had a massage?' Worst line ever.

"He said, 'You should make an appointment to go see her, and you know, it just so happens the massage room is in the gym and if I happen to be finished with my workout when you're finished with your massage, maybe we can get dinner?' And I'm thinking, 'Yeah, sure, that's not going to happen. I'm not going to tell him when my massage is.'"

That weekend, Sedgwick stumbled out of a spa at the exact hotel while Bacon had just been finishing a workout - a planned moment she hadn't been aware of until her now-husband informed her he'd rung ahead and asked for the exact time of her massage.

"I completely bought it. I thought it was just a coincidence," she admitted.

From there, their whirlwind romance begun and by Christmas Eve of that same year, the pair were engaged.

"I had no great role models in terms of healthy marriages," Sedgwick shared with Good Housekeeping. Her own parents - a father who was a venture capitalist and a mother who was a teacher - split when she was just three-years-old.

"But I knew in my heart and soul that he was the right person. It was an unquestionable truth of mine. I've never had anything like that before or after." 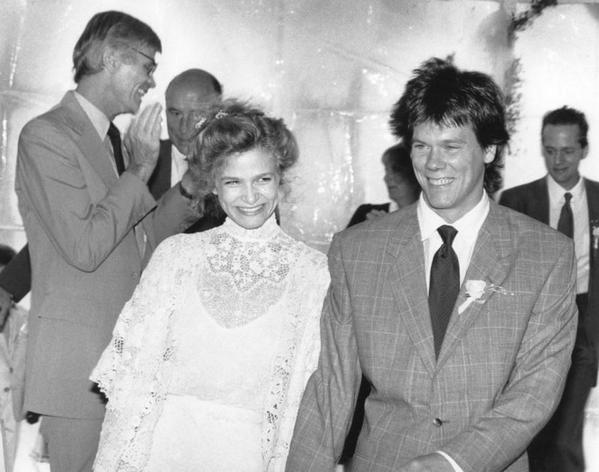 Despite their whirlwind romance, Bacon did recall one moment where he "talked her off the ledge" after Sedgwick anxiously admitted she hated her engagement ring.

"'It's all right, it's all right, honey—we'll go back. I don't care—we'll take it back,'" he recalled during an interview on The Kelly Clarkson Show.

Their quick progression into a relationship, marriage and kids was a marvel for even Sedgwick, who recalls that her younger days were filled with naivete.

"If someone had told me that at 22 I was going to meet the man I was going to marry and at 23 I would marry him and have a child, I would have told them they were out of their mind," she said to Redbook.

Just two weeks after tying the knot, the couple were pregnant with their first child, Travis. 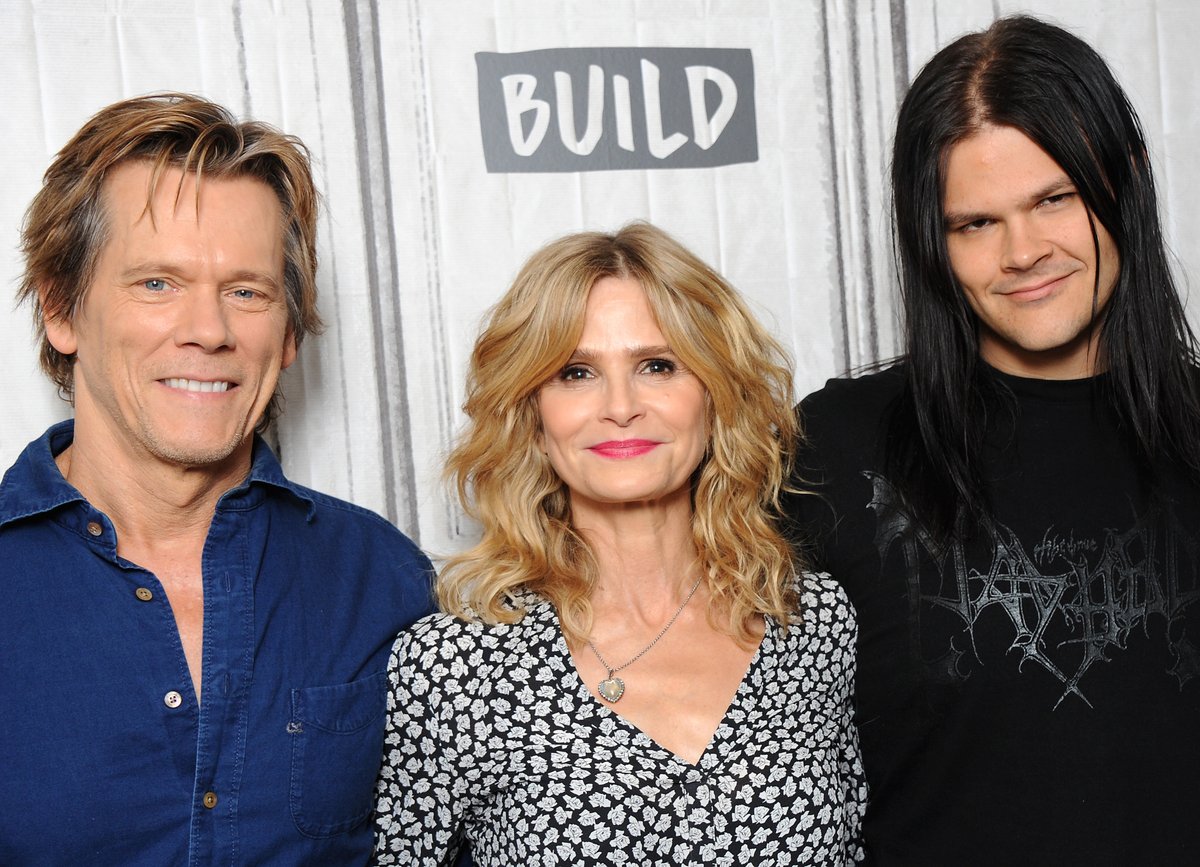 In June 1989, they welcomed their oldest son (Travis) and by March 1992; they had their daughter Sosie and settled into family life while attempting to juggle their high-profile careers.

"The minute I had a child I was like, 'God, I want to make sure there’s a good place here for him,'" Sedgwick told Glamour in 2019. "[Kevin and I] are both people who are spurred into action, and we like to be part of giving back. It's our responsibility."

Their most important parenting rule, said Sedgwick, was putting their relationship with each other first.

"I feel the primary relationship has to be the mother and the father, and then it can be the kids," the Game Plan actor explained. "Of course the kids come first in planning your life, but it's incredibly important to keep your relationship as a couple strong and make time for it. It's the foundation on which everything is built.

"Kids should know that your needs are important, because if they think your happiness lies only in them, that's a lot of pressure on them."

Juggling mum life with a high-pressure acting gig took its toll on Sedgwick, who shared she struggled with immense guilt over getting jobs and having to leave home.

"Work was complicated for me," she shared with Good Housekeeping. "Every time I got a job, it was: Yay!—but kids, husband... what's going to happen? I was always fraught with guilt, and it's such a waste of an emotion. It keeps you out of the moment of being where you are, and I've had a lot of that over the years." 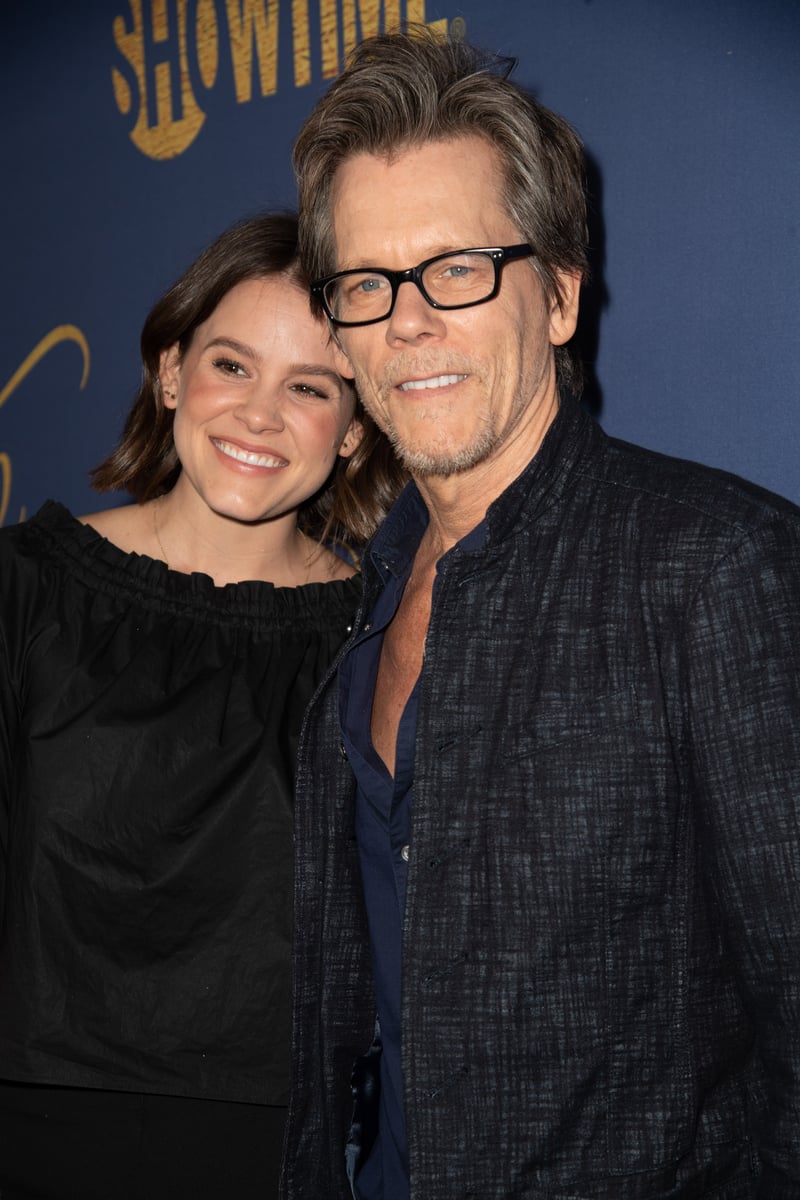 One of her largest and longest-running jobs yet came in the form of TNT's The Closer where she played an LAPD Deputy Chief - and yet, she almost didn't take it.

In a bid to propel her own dreams, Bacon took a year off of acting while his wife took off to film for six months in Los Angeles.

"It was heartbreaking," she said. "Half of me was in New York and half of me was in California. I missed stuff — events, performances — but we kept trusting that it was going to be okay. The good news is that Kevin was working less, and he was home during almost the entire school year. But it was really, really hard."

After six seasons of the hit program, Sedgwick called it quits and returned home to her home in New York.

"Originally I thought it was irresponsible to leave," she told Redbook. "I thought I should do another season. One night Kevin and I were talking about it, and he must have sensed my ambivalence, because he said, 'What about, just for tonight, you decide that you don't want to do another year?'

"And I realised that I felt so responsible for everybody else - people count on you for employment. That was weighing on me so much."

Interestingly enough, Bacon and Sedgwick found out they were (super, super) distant cousins while starring in an episode of Finding Your Roots - a discovery they received relatively well.

"I figured I was going to be related to Kevin Bacon - I mean, most white people are related, ultimately," she quipped at the 2017 Television Critics Association's summer press tour.

Since their first film together, Sedgwick and Bacon have shared on-screen roles with eachother since - from 1991's sex comedy Pyrates, and the 2004 drama The Woodsman.

The Ponzi scheme that only made Kyra Sedgwick and Kevin Bacon stronger.

Sedgwick's decision to leave The Closer followed shortly after she and Bacon lost millions of dollars due to stockbroker Bernie Madoff's elaborate Ponzi scheme.

"When it first happened, Kevin and I talked about it," the actor explained. "And we were like, 'We're not money people—we didn't get into this business for that.'"

While they had labelled Madoff a "sick man", their relationship remained as steady as ever.

"I don't think there was a moment where it was like, that thing happened and then we got pissed at each other. It was sort of the opposite," Bacon told GQ. "We kind of went, 'Holy s**t. Let's... I don't know. Let's have sex or something. It's free!'"

Kevin Bacon and Kyra Sedgwick after three decades of marriage.

After more than three decades together, two kids and multiple movies starring alongside eachother - Sedgwick and Bacon's relationship is one many can only dream of.

"We always knew that we were each other's 'one'," Sedgwick told Redbook of her husband "Both of us knew this was forever and we were going to work it out no matter what happens, so when we fight, it's not so scary. You can't be honest with someone if you think that they are going to leave."

In regards to their marriage? Sedgwick says everyone has got it just as bad as each other.

"Everyone has marital struggles - I don't buy the 'Oh, it's so hard, actors being married,'" she said.

"Man, marriage is hard for everyone. So when we're on the red carpet and we get the 'How do you guys do it? No one can stay together,' I get really irritated.

"I don't think our relationship is more or less difficult; I just think you both make the commitment and you make it work."