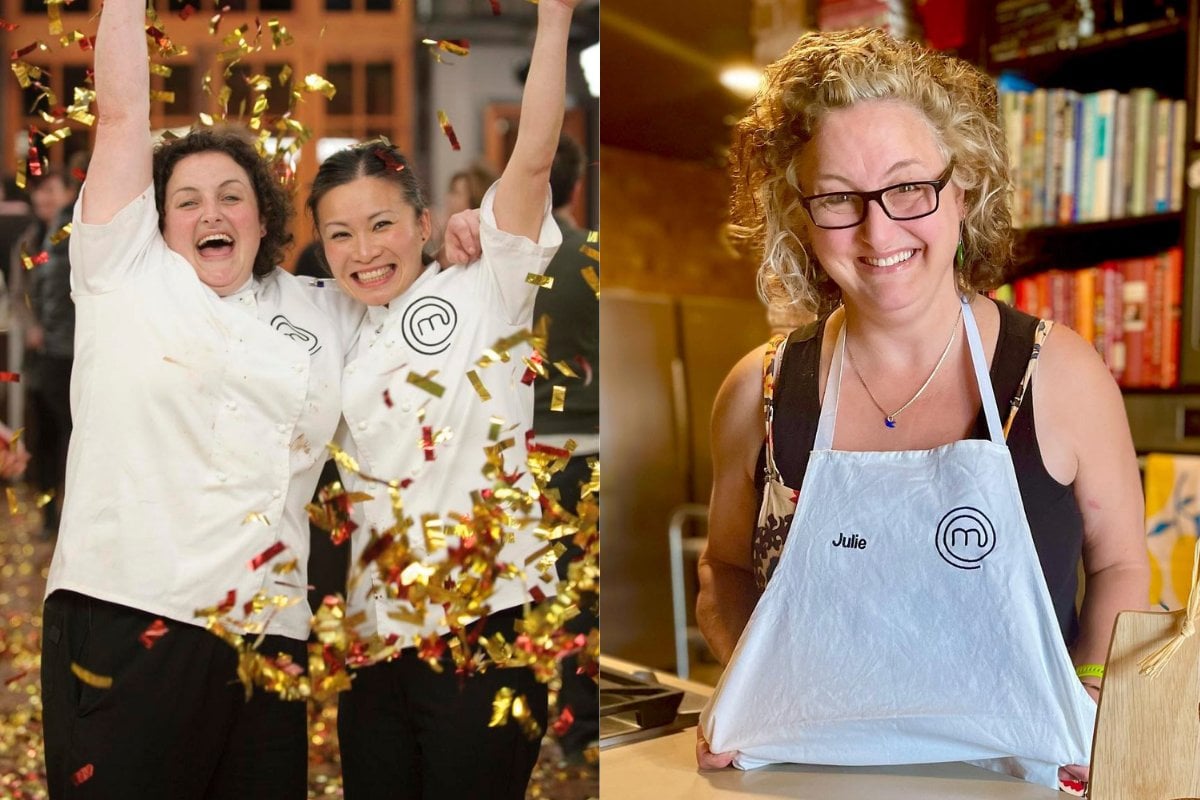 When Julie Goodwin got the phone call to return to the MasterChef kitchen, she was only a few weeks out of a stay in hospital.

She was working one half day a week at her cooking school, supervised by a colleague, and was certain it wasn't an opportunity she was up for again.

"When the call came, I remembered my season and the long days, the mental stress, emotional stress and physical stress and I just thought this is not possible for me on any level," the chef told Mamamia.

After becoming the season one winner of MasterChef Australia, Goodwin became an overnight household name.

While these amazing highs sound impressive (they are), the reality had the chef waking up at 4am for breakfast radio, going from there to her cooking school for a full day, and then heading to bed early to do it all over again.

"[I was] working seven days a week and there was no real downtime at all," Goodwin said.

There was no time for her husband and three sons, no time to look after her health, and no balance in her life at all.

"I found myself in a terrible, terrible situation and ended up - with the help and intervention of my husband [Mick] - seeking some help," she said.

In December 2019, Goodwin announced her resignation from her radio show, citing she needed to focus on family and her wellbeing. And in 2020, she shared that she had spent five weeks in a mental health facility.

"I just wasn't paying attention to my own health, and when you do that for long enough, it all just falls apart," she told Mamamia.

Over the past few years, Goodwin has been in and out of hospital, and has been vocal about her struggles with anxiety and depression.

She hopes to normalise it "so that people who are struggling don't have to feel ashamed".

"There's always the thought that if I don't come out ahead of this, then it's going to be presented as a topic that I was trying to hide," she said.

"And when you're trying to hide things, it sends a message that you're ashamed about it. But out of all the things in my life that I have been ashamed of, [this] is not one of them."

Goodwin says it's the people she met while in hospital that made her want to talk about it.

"You kind of think about being in a psychiatric unit, and, you know, those stereotypical, midday movie style scenarios where people are not like us," she said.

"But what I found when I went into hospital was that everybody in there was like me - everybody is just trying to do their best and live their lives, [but they] are not always able to manage that.

When Goodwin was asked to return for MasterChef: Fans & Favourites, she was told "don't answer now, sleep on it and we'll talk tomorrow".

She talked it over with her husband, psychologist, and sons.

"I spoke to my psychologist who said, 'It's like you've got two broken legs and you've just come to me and said I want to walk the Kokoda Track. But if you think this is what you need to do, then I'll walk with you.'"

The following morning when she woke up, "There was this little [feeling] of excitement, and I hadn't felt that for a while."

"I just kind of thought, well, I think everything's trying to tell me something," she said.

The returning contestant has had a pretty incredible first week back in the kitchen, all things considered. In Thursday night's episode, Goodwin won the first immunity of the season.

Now, she's so glad she said yes to that phone call.

"I have no regrets whatsoever," she said, before laughing: "I was terrified, I think that's pretty obvious from the way it's coming across on TV."

"I had no idea my face was doing those things, but that's me. I'm not here to play poker with them. It was a very, very scary thing to do but I'm so glad that I did," she added.

"It's reopened some doors inside of me that I thought might've been shut forever."

She admits those nerves stem from her worrying about the competition undoing all her hard work.

"I was afraid not only as to how my cooking would go, but I was afraid that I would walk through those doors, put myself in this pressure cooker and undo the work of two years of psychology and all the things that go along with trying to get better with mental health, exercise, proper sleep routines, all the medication and everything that has been working in harmony that helped drag me back to life," she said.

"That I was going to destroy that by doing this thing. I was frightened of that."

"It has not destroyed anything," she said. "If anything, it's helped me get stronger in a way that I didn't expect."

Catch MasterChef Australia: Fans & Favourites Sunday to Thursday at 7.30pm on 10 and 10 Play on demand.

S
sincly a month ago