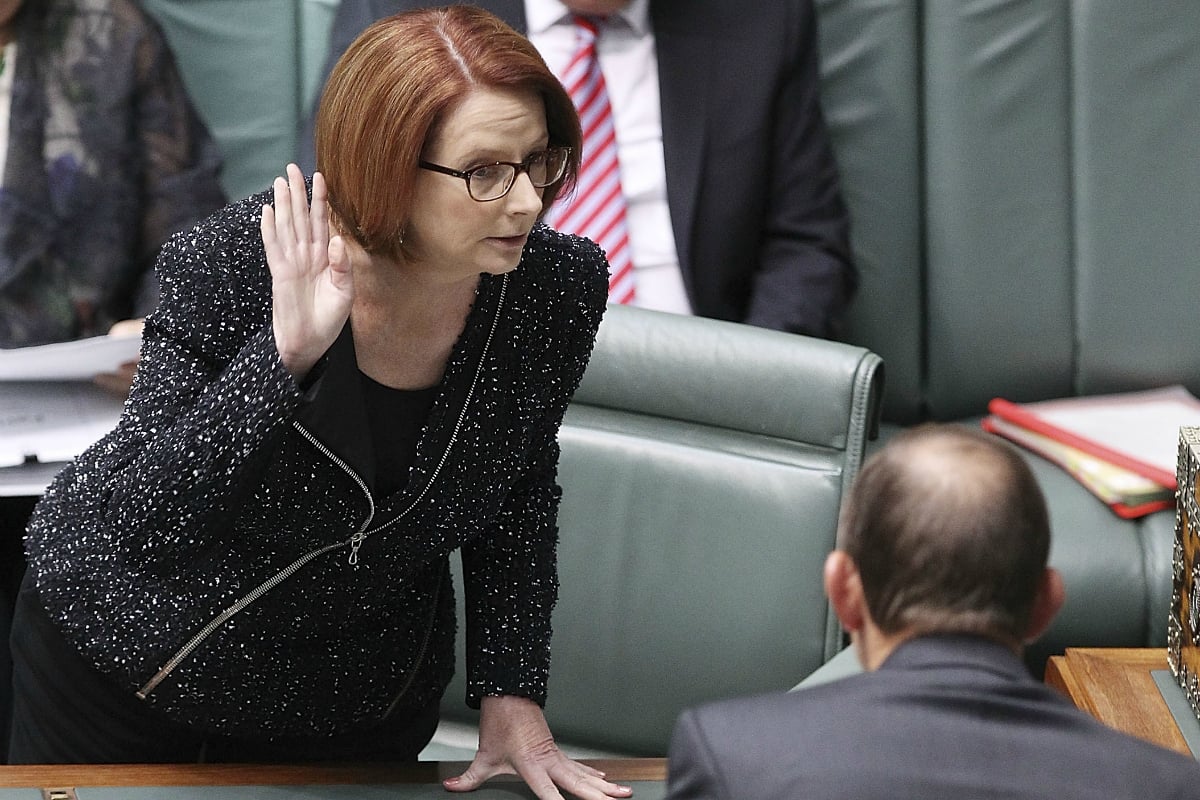 Julia Gillard was Prime Minister of Australia for three years and three days. In that time, Gillard endured sexism, misogyny and discrimination every day from her political opponents and the mainstream media alike, as she bore the brunt of being the nation's first female Prime Minister.

It's been 10 years now since she was sworn in as the 27th Prime Minister of Australia.

A decade on, there is one blistering moment from Gillard's term in office that has left an unforgettable mark on the nation's history. A moment so momentous, it continues to gain even more respect in retrospect.

READ: Stereotyping and being 'unlikeable': Julia Gillard on the barriers for women in leadership.

On October 9, 2012, Julia Gillard stood in the House of Representatives and called out the leader of the opposition, Tony Abbott, for his alleged prejudice against women.

As he sat across from the Prime Minister, donning an unmistakable smirk, Gillard listed just a few examples she proposed were emblematic of Abbott's view of women.

In case you need a reminding of her rhetoric, here's a brief excerpt:

"I was very offended on behalf of the women of Australia when in the course of this carbon pricing campaign, the Leader of the Opposition said 'What the housewives of Australia need to understand as they do the ironing…' Thank you for that painting of women's roles in modern Australia...

The speech even has its own Wikipedia page.

In fact, in April this year, Ben Rhodes – the deputy national security advisor to former US president Barack Obama – said the speech was regularly watched by Obama's team.

"I will tell you that whenever we were really annoyed with Tony Abbott, we would watch the video of that speech by Julia Gillard," Rhodes said.

"That speech got watched a lot in the Obama White House, let me just put it that way."

He added that Abbott was "far from his favourite leader to begin with".

In an interview with Stellar magazine on Sunday, Gillard reacted to those comments and reflected on the sustained relevance of the speech.

"Yet here we are, and in some ways I’m surprised, but in other ways I’ve come to understand what that speech has represented for women, and some men. It’s come to represent what they wished they’d be able to do in the moment they’ve experienced gender treatment."

Since leaving office, Gillard has become chair of Beyond Blue and recently published a new book, Women And Leadership.

In March this year, Gillard wrote for Mamamia about the obstacles that continue to affect women in gaining leadership positions.

"Research demonstrates that we unconsciously associate leadership qualities with men. Not only do we quickly see in our mind’s eye a man when we think of leadership, the research shows that we are likely to punish women who are leaders. Specifically, we are prone to conclude they are unlikeable," Gillard explained.

"Cultural stereotypes live deep in our brain telling us that men think, women feel; that men are to be judged on their actions, women on their appearance; that men lead while women nurture."

Gillard concluded the piece: "I am sick of crawling towards a world of gender equality. It’s time to run."

Indeed, the misogyny speech was somewhat of a catalyst for Gillard's legacy as a fearless feminist icon who continues to tirelessly work to break down the traditionally entrenched barriers for women in leadership.

Reply
Upvote
Went looking for this article after Alexandria Ocasio-Cortez's response in the US Congress to fellow congressman Ted Yoho's remark about and non-apology to her: it's a fantastic speech along similar lines.
B
bittersweet 2 years ago