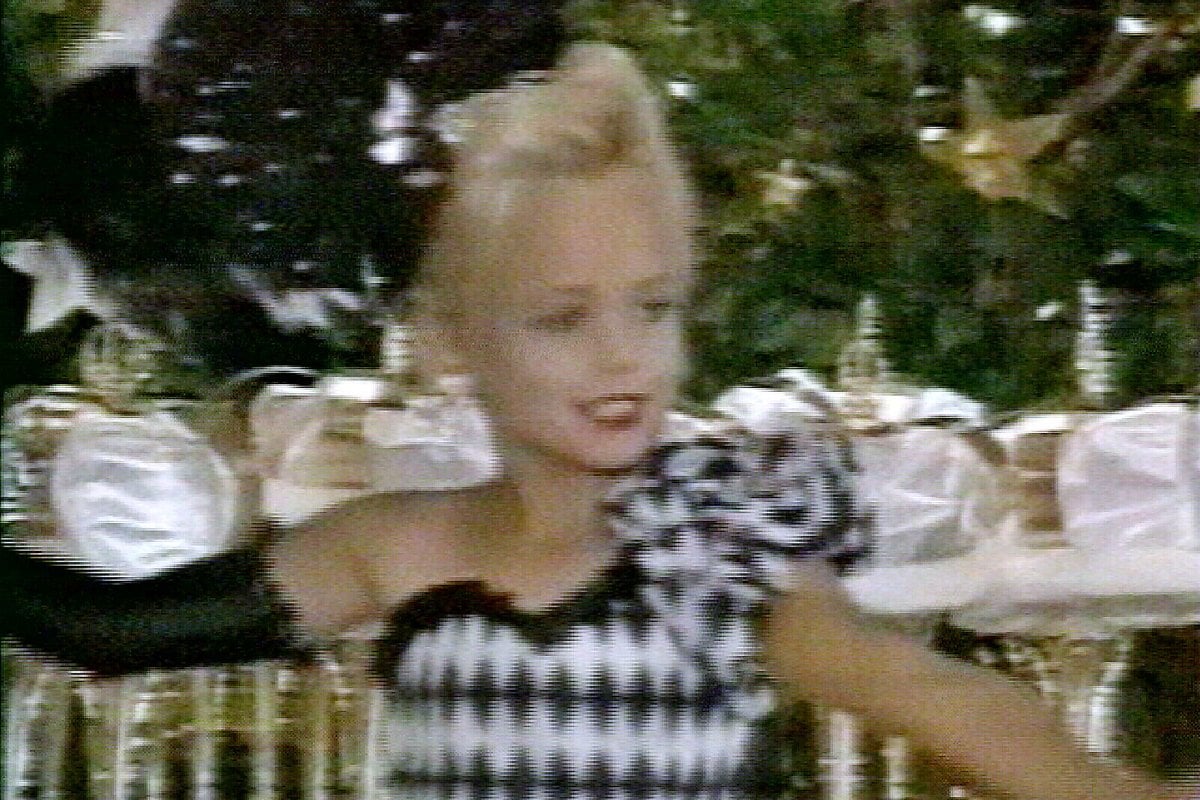 This post deal with violence and mentions child abuse and could be triggering for some readers.

Nearly 25 years ago, in Boulder, Colorado, six-year-old JonBenét Ramsey was brutally murdered in her own home on Christmas night.

What followed next gripped the world – forensic bungles, circumstances that grew stranger by the day, and a slew of suspicions centred around her millionaire parents, John and Patsy. But beyond the garish whodunnit, a little girl’s life was violently ripped short.

Will her killer ever be named?

Watch the trailer to the 2016 movie Who Killed JonBenét? Post continues after video.

The footage has immortalised JonBenét Ramsey. A tiny, high-powered pageant Queen glides through a turn with her arms outstretched. She’s trussed up in feathers and sequins, her bleached curls framing a face lavished in makeup.

Google her name and you’ll find pic after pic that make you shift with discomfort. A doll-size pout and doe eyes staring back at you. Crowns, sashes, gilded leotards, jewel-encrusted cowboy hats. A sweet, sandy-haired toddler. Forums packed with innuendo. Swirling theories citing suspects ranging from her brother Burke, a nine-year-old child himself when JonBenét was killed, to the bitter parent of a fellow pageant contender. Some even claim she’s not dead at all – she’s alive and well (in fact, they claim, she’s actually Katy Perry).

But perhaps it’s time we put aside the pageantry schlock, the Halloween costumes and wild theories that make perfect dinner party fodder and remember that JonBenét Ramsey was also very much a little girl who wet the bed and still wore Pull-ups during the day.

She was a Kindergartener. Like most six-year-olds, she loved to sing and dance and could be impishly mischievous.

She had a sunny, bubbly disposition and was known for how naturally curious she was, and for her caring and giving nature.

Everyone’s BFF, she was perpetually concerned for others, regularly chaperoning her classmates to the sick bay at school and always sharing her toys and treats with others.

Backstage on the pageant circuit where she was a regular competitor from the age of four (she held the titles of America’s Royale Miss, National Tiny Miss Beauty and Little Miss Colorado 1995) she would bring her Barbie collection and pass them out to other girls to play with.

“She was very happy, very energetic. She was always real friendly with all the other girls,” LaDonna Griego, a child beauty pageant organiser, remembers.

In our desensitised cultural landscape, where we grab popcorn and feast on true crime like fascinated leeches, where memes and GIFs are generated at lightning speed with few moral boundaries, and where we loiter in chat groups or round the office cooler playing PI, it’s easy to forget that JonBenet Ramsey was a real child who was murdered in her own home. A child who was left lying lifeless on a cement floor. She’d been strangled, her skull was fractured, there was blood in her underwear. A cord was around her wrist and duct tape covered her mouth.

From the very onset, when JonBenét's hysterical mother Patsy Ramsey rang 911, informing the operator “we have a kidnapping!” and detailing a lengthy ransom note, written on Patsy’s stationery, things never quite tallied up. Patrol Officer Richard French arrived at the house at 5:52am on December 26, seven minutes after Patsy made the call. No footprints were found in the snow and there were no signs of an intruder. Later, French would tell his colleagues that he had been struck by the opposing reactions of the two parents, and how they barely spoke or looked at one another while he was there. John Ramsey stayed cool and collected while, according to French, Patsy Ramsey sobbed manically as her eyes stayed riveted on French. French conducted a cursory search of the 6800sq-foot Tudor-style home but didn’t enter the basement. 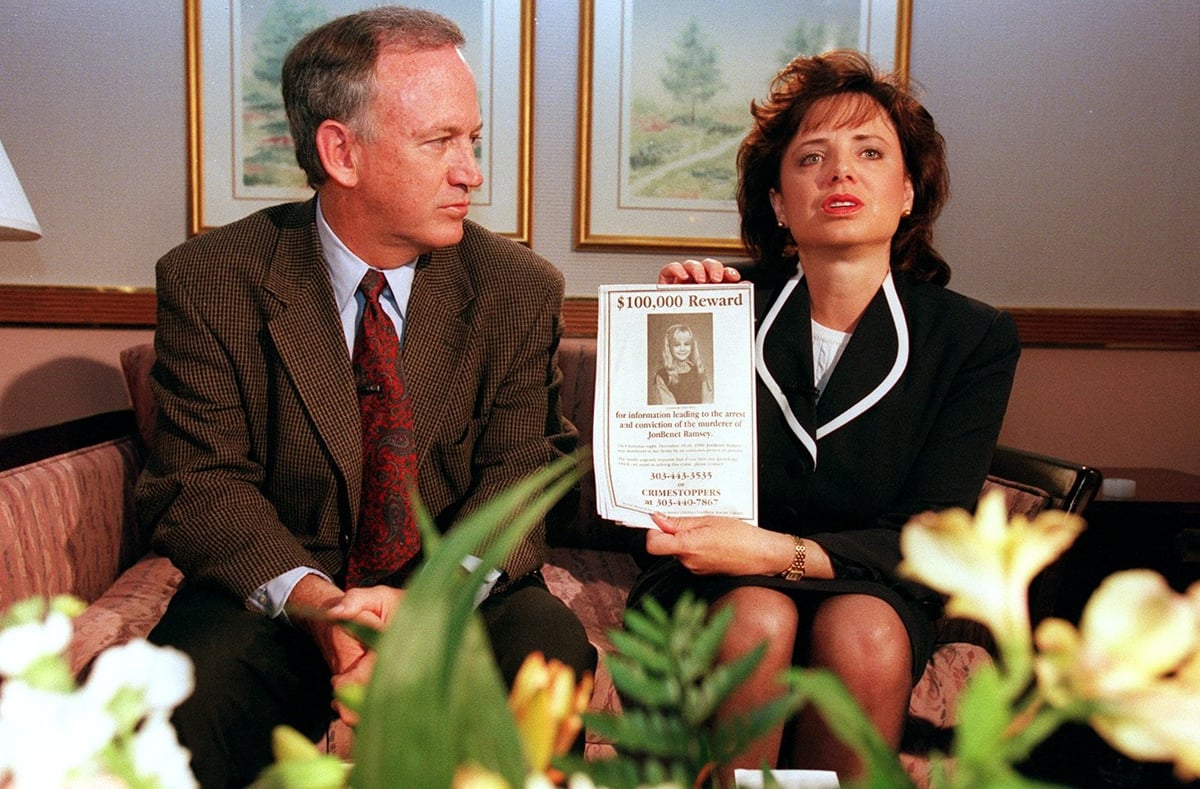 John and Patsy Ramsey, the parents of JonBenet Ramsey, meet with a small selected group of the local Colorado media after four months of silence in Boulder, Colorado on May 1, 1997. Image: Helen H. Richardson/ The Denver Post.

JonBenét's body wasn’t found for another seven hours. Incredibly, Detective Linda Arndt turned up on the scene at 8.10am but only ordered a “top to bottom” search of the house in the early afternoon. She later recalled the words had barely left her mouth when John Ramsey bolted from the kitchen and headed straight down to the basement, where he found JonBenét's body in the storage room, yanked the tape from her mouth, and carried her upstairs into the living room. It was a catastrophic error of judgement, resulting in the tainting of crucial evidence. To make matters worse, throughout the day, the house had been a hive of activity, with family friends and a team of victim advocates serving food and moving throughout.

48 hours later, the police were informed by lawyers representing the Ramseys that they had nothing more to say and would answer no further questions. Within a week, a media consultant and publicist were added to the Ramsey team. Despite doing a 45-minute interview with CNN on New Year’s Day, John and Patsy Ramsey refused to be interviewed by the police until four months later, citing emotional distress. By this time, handwriting analysts had not ruled out that Patsy wrote the note and the Ramseys, who fled to Atlanta, Georgia, a few days after the murder, were now considered chief suspects. (JonBenét's brother, Burke, wouldn’t be interviewed for another year-and-a-half.)

Detective Arndt remained vocal about her suspicions of the Ramsey family. In 1999, she told ABC News she was so convinced the killer was in the house that day, that she quietly counted the bullets in her holster when she kneeled next to JonBenét's body. Another detective echoed her concerns, overhearing John Ramsey coolly making plans to fly the family to Atlanta just hours after the murder. Years later, the operator who took the 911 call told how Patsy had failed to hang up the phone properly. Kim Archuletta was “disturbed” by the sudden shift in Patsy’s tone from frantic to calm once she thought the call had ended. “I just remember having that sunken feeling, like something wasn’t right,” she said.

But the Ramsey family were staunch. In a statement, John Ramsey insisted, "A person doesn't go throughout their lives as a normal human being, one night turn into a monster, slaughter their daughter, go to bed and get up and act normal from there on. That doesn't happen."

A Grand Jury Investigation began in September 1998. It wasn’t until 2008 that John, Patsy and Burke Ramsey were exonerated by one touch DNA testing performed on JonBenét's leggings, two years after Patsy passed away from ovarian cancer. But question marks remain on this decision; as a source told People, trace amounts of DNA can wind up on clothing from all kinds of sources, including from "the person who packed it in China".

If the Ramseys were not responsible for JonBenét's death, then who? A few names have been floated, from Gary Oliva, a drifter and convicted paedophile who told a friend he’d killed a girl just after JonBenét's murder, to an American schoolteacher living in Thailand, John Mark Karr, who announced at a press conference in Bangkok he was present at the killing but was later cleared by DNA analysis. Bill McReynolds, a local who played Santa Claus at children’s parties, had entertained at the Ramsey’s home two days prior and was observed to have an unusual bond with the little girl. So far, all suspects have led to a dead end.

Listen to True Crime Conversations, where Jessie Stephens explores the world's most notorious crimes by speaking to the people who know the most about them. Post continues after podcast.

In September 2016, Burke Ramsey even weighed in on the debate when he sat down for an interview with Dr Phil. Twice, he shrugged and said, “It probably was some paedophile in the pageant audience”.

Despite the suspicious cloud surrounding the family, one of the most dedicated investigators on the case, Lou Smit, remained a fierce believer that an intruder killed JonBenét until his death in 2010. Nearly 25 years on, the case remains wide open, with Boulder police continuing to follow up leads and investigate tips. Says spokeswoman Dionne Waugh: “We still ask anyone with information about JonBenét Ramsey’s homicide to contact us.”

JonBenét Ramsey would have turned 30-years-old in August. As the 25th anniversary of her death approaches, we remember not the “pageant Queen” but the observant, compassionate girl with the big heart who always had a smile for others.

You are not forgotten.