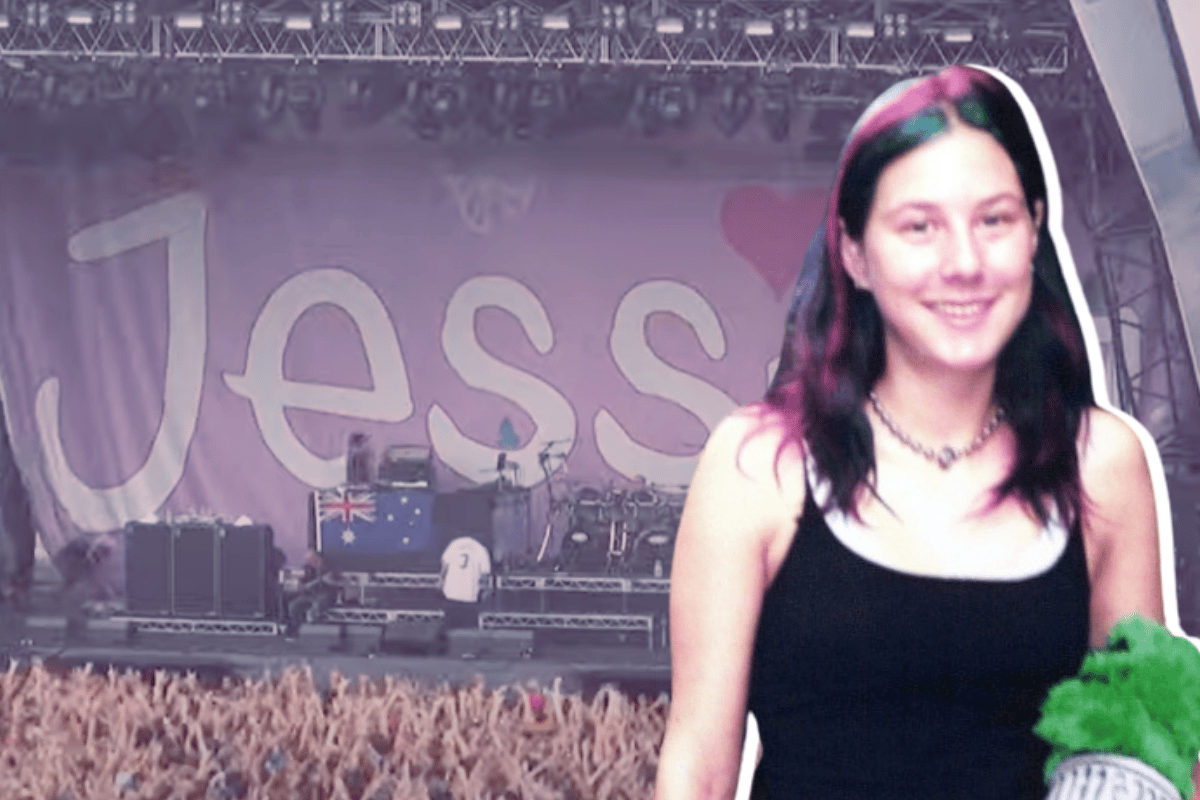 Jen Critchley remembers the exact moment she found out her childhood friend had tragically died at a Sydney festival.

Her dad pointed out a photo in the newspaper that looked like her friend Jessica Michalik. Above the photo read the headline, 'Girl dies at Big Day Out'.

"They used a photo from her formal," Jen, 37, told Mamamia. "She had red curly hair [in the photo] and it's normally blonde and straight and she had heavy makeup... My dad said, 'this looks like Jess' and I said 'oh my God it does, but it's not'."

"I remember just staring at it and thinking it didn't make sense because it wasn't a normal representation of her... I think I just didn't want to believe it was her."

A mutual friend later called Jen and broke the news.

"It was all a bit of a shock," she recalled.

As a big music lover who dreamed of coordinating music festivals one day, Jessica was excited to attend the festival with her friend Liza Ryan, just like they did the year before.

That night, around 9:15pm on Australia Day, US rock band Limp Bizkit took to the stage for their set. All of a sudden Jessica, who was standing in the mosh pit, was caught in a crowd surge.

Minutes after the band started playing, security guards signalled singer Fred Durst to stop the music. Fans began being pulled out of the crowd by security guards. Among them was Jessica.

"My last moments with her were in the crowded area, in the mosh pit," her friend Liza later told Double J in 2019. "I had her hand, and then I let it go."

Jessica was pulled unconscious from the crowd and taken to Concord Hospital where she was put on life support until she passed days later.

The coroner later found Jessica was "crushed to death". She was 15.

At the time, the tragedy attracted heavy media coverage.

"It was horrific to read that about someone you know and to be constantly detailed about the tragedy every day,” said Jen, who first met Jessica in primary school.

"There was also an assumption by the media that dugs and alcohol were involved. But her parents actually ordered two toxicology reports to prove that there wasn't."

Jen said Limp Bizkit called Jessica's parents in the days before they turned off her life support off. But "there was no contact from them after that".

After her passing, Jessica's favourite band, Grinspoon, played at her memorial service. The band also wrote a song for the teenager titled ‘Chemical Heart’.

"At the funeral there was a real sense of her friends supporting each other," Jen recalled as her voice began breaking. "I still remember [the parents] comforting us because we were all really upset."

For Jen, the hardest part of the tragedy was that Jess was "literally one of the kindest people" she knew.

"She never had a bad word to say about anyone... she was always going out of her way for people."

"That was what I really struggled with at that time, out of anyone she's the person who least deserved this to happen."

A coronial inquest later found that no-one was negligent at the festival, however, it was pointed out that Limp Bizkit didn’t stop playing when first asked by security. Singer Fred Durst was also criticised for his "inflammatory" and "insulting" comments at security guards who tried to help pull fans out of the crowd.

"I remember just feeling really angry that they hadn't stopped playing," said Jen, who added that the band instead incited the crowd by launching into "a really aggressive song".

"It was a preventable tragedy, it didn’t need to happen. It wasn't an act of God, it wasn't a tragic accident, it was something 100 per cent preventable. At the time, I just remember feeling really angry about it."

20 years later, those emotions were brought up once again when Jen read the news of the Astroworld disaster this week. This time, a crowd surge had claimed the lives of nine people.

"The first thing that came to mind was why?... why is this still allowed to happen?"

Fortunately, there was a silver lining to come out of Jessica's tragic death.

Big Day Out brought in 12 new crowd safety measures and a D-barrier, which is designed to separate fans in the mosh pit from the rest of the crowd.

But Jen wants to see more safety measures put in place to make sure no one else has to lose their life ever again.

She also says there needs to be a change in attitude from those in the crowd.

"People are there to enjoy music they're not there to get hurt. I get that music makes people feel passionate, and it conjures up different emotions but you don’t need to be violent."

11 years after Jessica's death, Limp Bizkit returned to Australia in 2012 for the music festival Soundwave. During the concert, the band paid tribute to Jessica by dedicating a song to her and displaying a large purple banner with her name on it.

However, Jen, who was hesitant about attending, said the gesture felt "tokenistic" watching on in the crowd.

"It felt like they were doing it because they had to [and] because it would be poor form not to. It felt a bit disingenuous."

To this day, Jen hasn’t been in a mosh pit since and is "hyper aware" of large crowds and people acting violent when she does go to concerts.

She was also anxious when her 17-year-old son started going to gigs.

"People don’t go to these events thinking they’re going to die. You’re going to go have fun, listen to music and have an amazing day. The last thing that you think about is that you might not come home."

"You only need to learn from the mistakes that have previously been made. And they shouldn’t have happened in the first place."