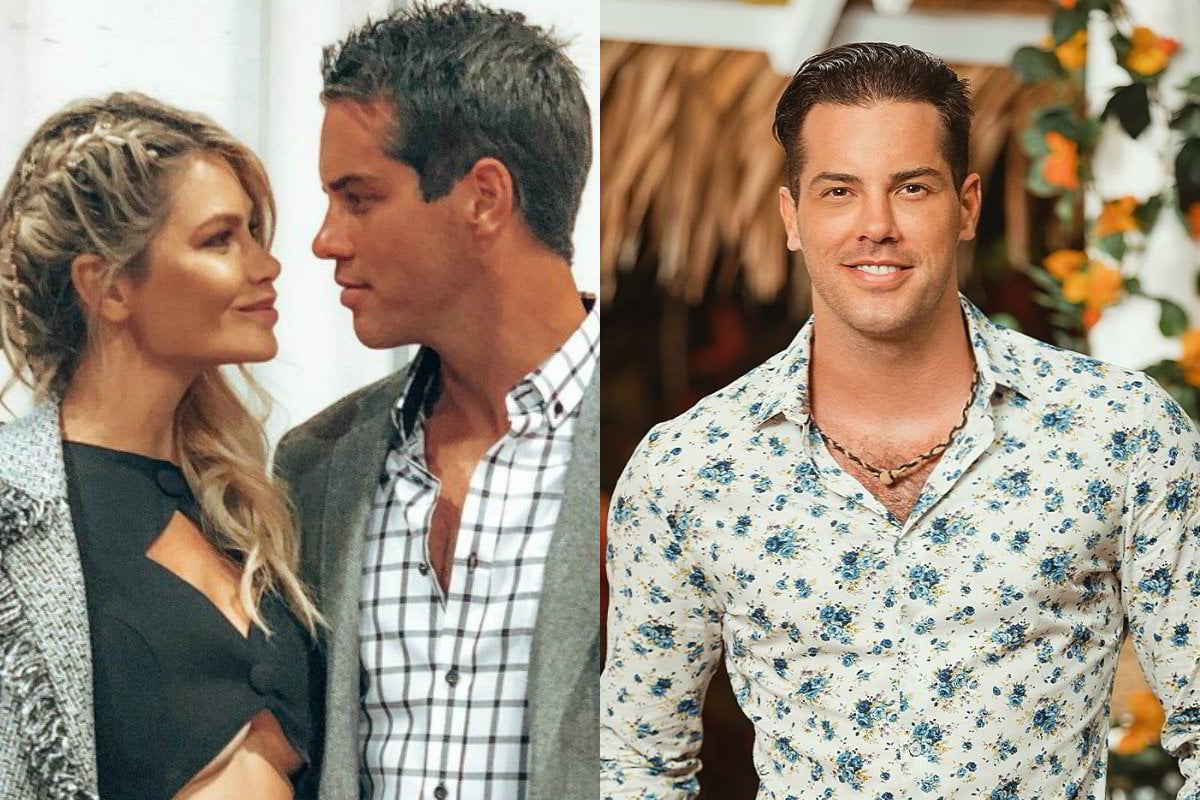 Jake Ellis really thought he was over his ex-girlfriend Megan Marx when he arrived in Fiji for Bachelor in Paradise season three.

But then, as we saw in the series' first few episodes, he realised he was definitely... not.

On Wednesday night's episode, Jake made the decision to leave the show because he was still in love with his ex, who he met on the first season of the show in 2018.

Speaking to Mamamia following his exit, Jake talked us through exactly what happened following his on screen declaration of love.

He and Megan aren't officially back together, but "we've been taking it slow and we've always been close friends, so we've just been building on that seeing where it leads", he told us.

Jake said he told Megan what was coming when the show aired, but he wanted her to see the entire episode (they watched it together, FYI) without knowing exactly how it played out.

"It was a difficult conversation, like I was in Paradise and trying to find someone else and in fact it made me realise I was very much still in love with her.

"Obviously it was a bit of a shock for her too. It's just taken some time. It's like going back to dating for the first time again, just spending quality time together and just seeing where it leads."

"When I left Paradise I told her that I'd done it and it was coming, so we've been taking it slow and we've always been close friends, so we've just been building on that seeing where it leads."

Jake said he went into Bachelor in Paradise thinking he had moved on, but being in that environment brought all his feelings flooding back.

"At the time we'd broken up for some time and when they asked me to do Paradise, I felt that I was ready," he said.

"I had such a great experience the first time, I'd be stupid to do it again and to try to see if I can put myself out there. Obviously it took some time, and when I was there it just reminded me more of what I did have with Megan."

Find someone who’s as weird as you.. and keep em’ 🙂 Or try to anyway 🌹 #happy @megan.leto.marx

He said they were like "magnets" who kept coming back together.

"Megan's always been there. She was there for me during the hardest part of my life when I lost my mum to cancer. It was a matter of weeks after filming season one and after we first got together," he explained.

"She stood by me and has always been my best friend who I've always turned to for support through some really tough times and that's something I'll always appreciate.

"But I think more than anything, we're just like magnets and we were always coming back to each other so rather than jumping in head first like we've done so many times before, I think we wanted to realise why we are like magnets and what our fears were, and just work through them."

For nine months, they've been able to keep their potential reconciliation under wraps, but now that Bachelor in Paradise has aired there is more public interest in their relationship status, which Jake admitted added a bit of pressure.

"It's a double-edged sword. I feel honoured that people are invested enough in us to want to know and that people really saw the love that we have for each other, I think that's beautiful and it's something I really appreciate. But at the same time, it does add a bit of extra pressure with what we're doing," he said.

I meant every word.. Paradise means something, a rose means something - it means taking a chance on love, putting yourself out there and being vulnerable whether it works or not. So I’m going to take the chance to find that love again. Paradise you’ve been an experience.. ❤️

He left BIP with a bit of a jab at those handing out 'friendship roses', but he's adamant there are no hard feelings.

Viewers didn't see too much of the friendship rose discussions in the episodes, besides a few whispers and Niranga giving Cass a foot rub, for reasons that remain... unclear, but Jake said there was plenty of behind-the-scenes plotting going on.

"They were pre-planning ahead the rest of Paradise," he said of his cast members, saying he stood behind his parting words.

"Like, 'I'll pitch in and give you a rose and make sure we get to the end and we'll part ways as friends'... I'm not a fan of it, I feel like it's wasting everyone's time."