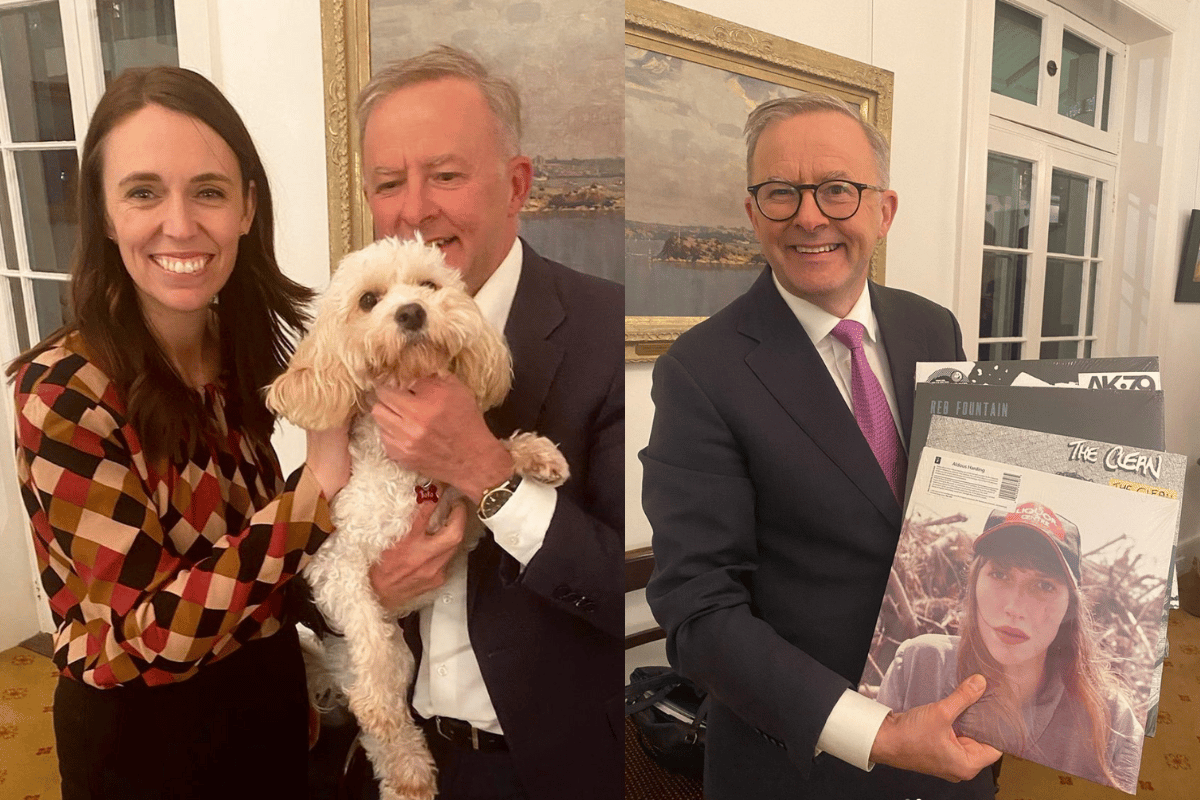 This weekend, we experienced a vibe shift of sorts between Australia and New Zealand.

For some years now, the two governments had endured a publicly amicable yet frosty relationship, particularly with former Prime Minister Scott Morrison in power.

There were suggestions from NZ's Prime Minister Jacinda Ardern that Australia was "testing the friendship" with New Zealand, amid claims of "unfair" policies, awkward photo ops and tense exchanges.

It's also been a fraught time for foreign relations in general, considering Australia's current predicament with China, and many of our Pacific Island neighbours. You can also note Australia's lack of action on climate change and the stoush with France...

Simply put, we've had a bit of a PR nightmare on the world stage.

Luckily, some foreign policy experts are suggesting we might be heading into calmer waters now. And it has become Anthony Albanese and Foreign Minister Penny Wong's job to lead us there.

Watch part of the press conference with Jacinda Ardern and Anthony Albanese. Post continues below.

On Saturday it was announced that Australia will pay French company Naval Group around $830 million to settle a scrapped defence contract that would have seen it build submarines in South Australia. The decision in September 2021 to scrap the $90 billion contract enraged the French government, resulting in a diplomatic stoush that included the recall of its ambassadors from Canberra and Washington.

Albanese said his government had reached a fair and equitable settlement with Naval Group that would "rule a line" under the torn-up contracts.

"It follows, as well, discussions that I've had with President (Emmanuel) Macron and I thank him for those discussions and the cordial way in which we are re-establishing a better relationship between Australia and France," Albanese told reporters.

"I'm looking forward to taking up president Macron's invitation to me, to visit Paris at the earliest opportunity."

It was a heavy yet arguably necessary price to pay, given the leaked texts/accusations of lying debacle that occurred between Australia and France last year.

I ask French President Emmanuel Macron whether Scott Morrison lied to him: “I don’t think, I know.” pic.twitter.com/3tcg4xrl90

As for Foreign Minister Penny Wong, as soon as the new government was appointed, she was on her way to the Pacific region to do some damage control.

She recently completed a diplomacy blitz in the Pacific in a bid to counter growing Chinese influence after Beijing signed a security pact with Solomon Islands, sparking concern from Australia and its allies.

So onto New Zealand.

Ardern and Albanese met in Sydney this week, and Ardern became the first guest at Kirribilli House of Albanese's tenure.

The PMs ran through the diplomatic motions - the grip-and-grin handshakes, the big smiles, the gift exchange and the formalities. But this time, it felt different. Perhaps more genuine.

Ardern wrote on Instagram: "Just finished up a lovely dinner with the new Prime Minister of Australia, Anthony Albanese. He was kind enough to gift me Midnight Oil, Spiderbait and Powderfinger on vinyl, so we left him with a few Flying Nun treats in return. Looking forward to the formal meeting we have scheduled for tomorrow, there's a lot on the agenda!"

It was followed by some good ol' roasting by Ardern's husband Clarke Gayford who commented: "Midnight Oil, Spiderbait and The Finger????!!!! What is this, 2004???"

The exchange made sense, especially given Ardern and Albanese have both moonlighted as DJs in the past. In 2016, Albanese played a charity event in Melbourne, and still sometimes drops song lyrics into his speeches, while Ardern helped headline Auckland's popular Laneway festival in 2014.

On breakfast TV the following day, she was asked by TODAY if she had exchanged vinyl records with Scott Morrison before, with her reply being: "We talked about music on occasion but I'm not sure I would've picked necessarily the right music if I think I was given that task..."

The pair then posted plenty of selfies, photos of Ardern meeting Albanese's dog Toto, enjoying the harbour lights at Sydney's VIVID Festival and getting keen for the FIFA Women's World Cup next year. 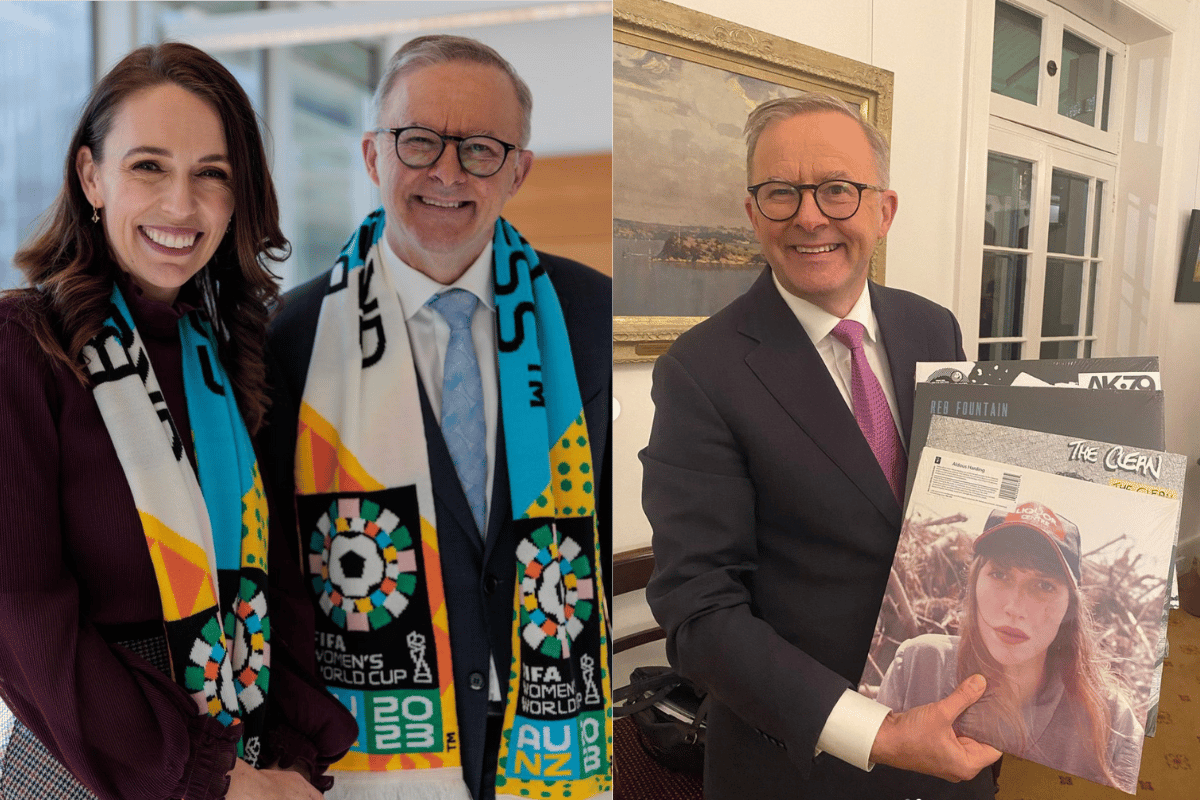 Of course foreign policy isn't all about PR photo ops, dog pats and exchanging vinyl records. It's far more complicated than that.

One of the major contention points between Australia and New Zealand has been our policy on sending deportees to New Zealand. Ardern's government has strongly opposed Australia's policy of deporting New Zealand citizens, no matter how long they had spent in Australia if they had committed a crime.

"I'm not asking that Australia stops the policy," Ardern said back in 2020 in a tense press conference with Scott Morrison.

"You have deported more than 2,000 individuals, and among them will be genuine Kiwis who do need to learn the consequences of their actions. But among those 2,000 are individuals who are too young to become criminals on our watch. We will own our people. We ask that Australia stops exporting theirs. Do not deport your people and your problems."

So with this in mind, Ardern said her discussions with Albanese were promising saying he offered "more of an open door than we've had for years" on longstanding Kiwi concerns. Ardern was also pleased to hear Australia's new government is open to talking about removing barriers to citizenship for Kiwis living in Australia.

Albanese pledged a review of the policy, without guarantees.

At their joint press conference over the weekend, Arden said she was optimistic, saying: "It is a significant shift in the language that we have had from previous Australian governments."

As Albanese said: "I can't think of anything better than the first foreign leader to welcome to Australia's shores being our friend from New Zealand, and my personal friend. We agree on our world views and can take that position forward. It's like Australia has gone out of the naughty corner."

Ardern then smiled at the press conference as Albanese recounted how she had snuck in the very first congratulatory phone call on his election night party. Given all that's occurring in the world and the list of serious issues that must be addressed globally, it's reassuring to have a little sigh of relief Down Under.

"When I say that we are family, I mean it very sincerely," Arden said. "We had very free-flowing and productive talks today. In my mind, the discussions really represented the opportunity for a reset."