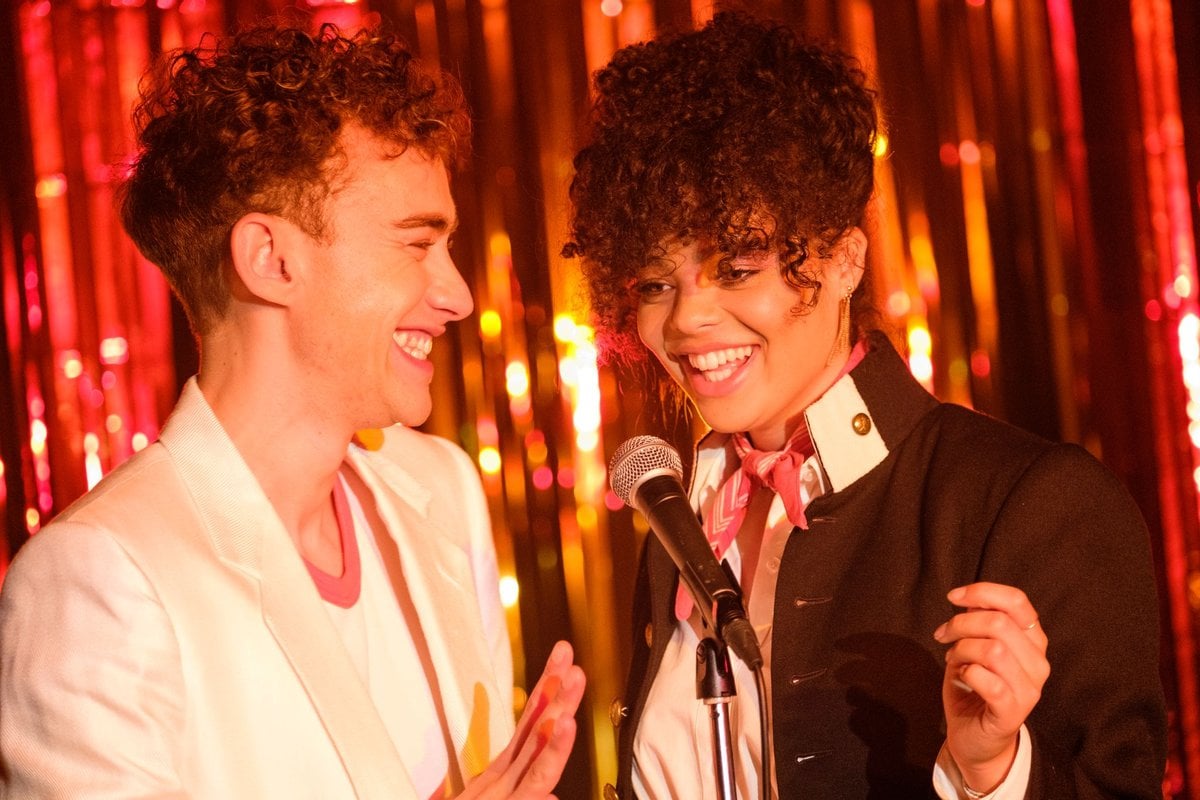 It's A Sin is one of those shows that will shake you to your core.

The series, which is a perfect blend of heartfelt comedy and searing drama, tells the story of five friends living in  London in the early 1980s.

Ritchie (Olly Alexander), Roscoe (Omari Douglas), Colin (Callum Scott Howells), Ash (Nathaniel Curtis) and Jill (Lydia West) are having their first true taste of adult freedom, experiencing the highs and lows of career, love, sex and wild partying while shacked up together in an apartment they dub The Pink Palace.

The lives of the five friends are then rocked by a mysterious new disease that begins to spread through their community.

It's a show like no other, so here are four things you didn't know about Stan's groundbreaking show It's A Sin.

Listen to The Spill Watch Club: Stan’s ‘It’s A Sin’ Is Essential Viewing.

1. The character of Jill is based on a real person who lived in The Pink Palace.

Jill, played by Lydia West, is the heart and soul of The Pink Palace, which is why it's comforting to know that she is based on a real person: Jill Nalder, who also appears in the series.

In It's A Sin, Jill Nalder plays Jill Baxter's mother, a role that is made all the more emotional by the fact that Jill has been a friend of the show's creator, Russell T Davies, since they were 14-years-old.

During press for the show, Russell has said that Jill really did move to London, become an actor and move into a flat called The Pink Palace with a group of friends.

She also stood by her friends as an ally and activist during the HIV and AIDS crisis when it hit the UK.

As Russell T Davies wrote in The Guardian "Jill met the crisis head-on. She went to the hospitals and the funerals and the marches. She held the hands of so many men."

"Jill is so interesting, kind and sweet, and she really lived through that time," actress Lydia West told Mamamia about working with the real-life Jill. "It was really interesting to have someone in the room who had lived through this experience and who could reel off a bunch of personal anecdotes to remind us all this really happened.

"She gave insight into the friendships they had, the parties they went to and what The Pink Palace was really like. Just what all that love and loss was like. She’s a real inspiration, and it was so special having her there."

2. The most tragic part of Richie's story is also pulled from a person in Russell T Davies' life.

At the end of It's A Sin, Richie's conservative parents arrive at the hospital to see him. At that moment he is forced to tell them about his sexuality, his AIDs diagnosis, and his cancer all in one hit.

Russell T Davies has explained that all of It's A Sin was initially inspired by a young man whose life followed a similar path and who was also friends with him and Jill.

"The drama took shape, inspired by one story she’d first told me way back in the 90s," he wrote.

"A story which had haunted me for decades. A man I knew, too. With a horror story at the heart of it; a man whose parents didn’t know anything until they turned up at the hospital to discover he was gay, he had Aids, he was dying, all in one moment.

"I hope we’ve done him justice. That beautiful boy."

Take a look at the trailer for It's A Sin, streaming only on Stan.

3. There are important messages hidden in the character's costumes.

The costumes in It's A Sin aren't just there to look good (although, they certainly do). They also provide important insight into the characters on screen.

For example, when he scores a job on Savile Row, Colin favours brown tailoring because all the other tailors within this environment are wearing that same colour palette and style.

This is done deliberately to show that he has yet to find his own identity and is trying to blend into his new work world, rather than stand out.

According to It's A Sin costume designer Ian Fulcher the character's costumes change when their identity and feelings do.

For example, when Roscoe (Omari Douglas) is trying to change his life and please MP Arthur Garrison (Stephen Fry) who is acting as his sugar daddy, he tones down his usual flamboyant style and begins wearing grey and navy suits... He is effectively hiding away his true self.

This makes the moment where he rips off his tie and suit jacket and runs to join his friends at the protest march all the more special.

This line of costuming also explains why Henry Coltrane (Neil Patrick Harris) dresses slightly differently from his colleagues: it's his way of subtly showing that he's comfortable with his queerness.

"His debonair sartorial flair manifests itself in his accessories, and particularly his pocket handkerchiefs, their richness and even in the way they are pleated," Fulcher explained in an interview with Vogue. "It is not a regular formal straight line but in an artfully pleated triangular fashion." 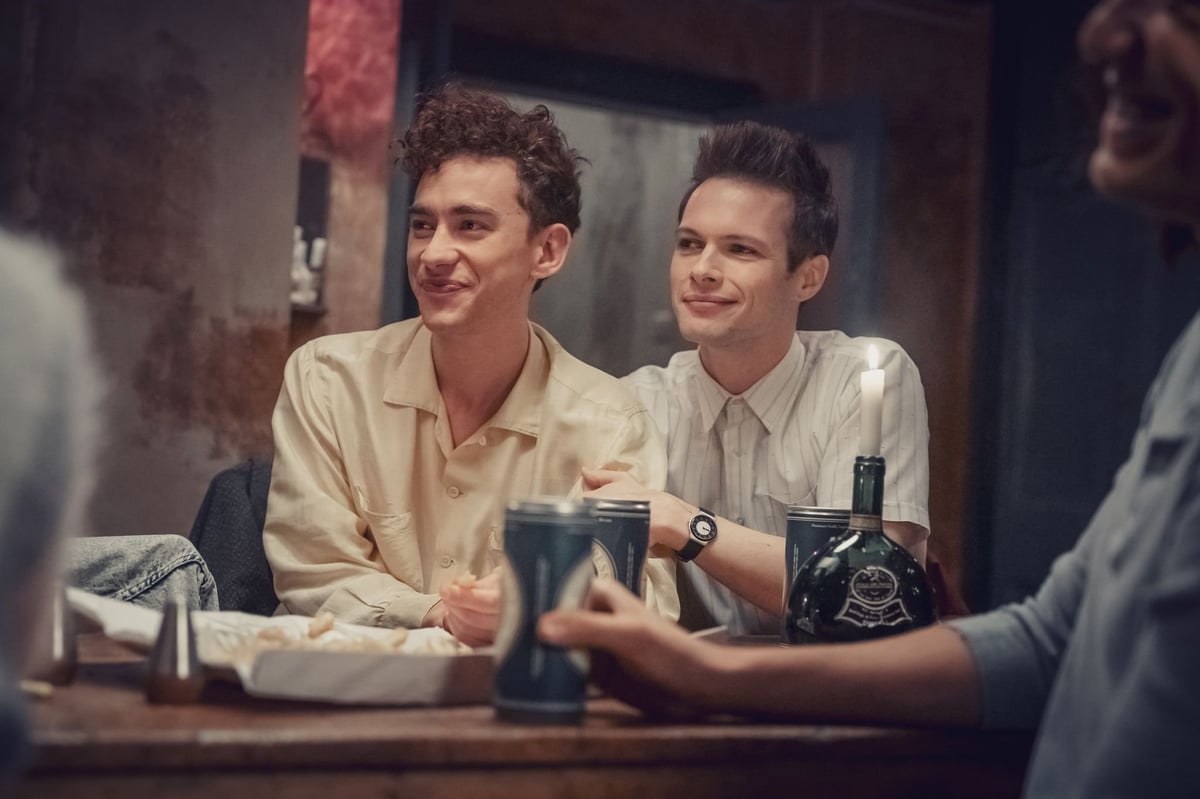 Olly Alexander and Nathaniel Hall as Richie and Donald in It’s A Sin. Image: Stan.

4. One of the young actors on the show was diagnosed with HIV as a teenager.

In an interview with Radio 1's Life Hacks, Nathaniel said he caught the virus the first time he ever had sex.

"When you're 16, you think you're an adult. You think you know the world. I'm from a nice, safe, middle-class background. I was head boy at my school, I was a straight-A student.

"Now the medications are so good that the level of virus is reduced to what's called undetectable, which means you're untransmissable. So I can't pass my HIV on."

All episodes of It's A Sin are streaming now, only on Stan.