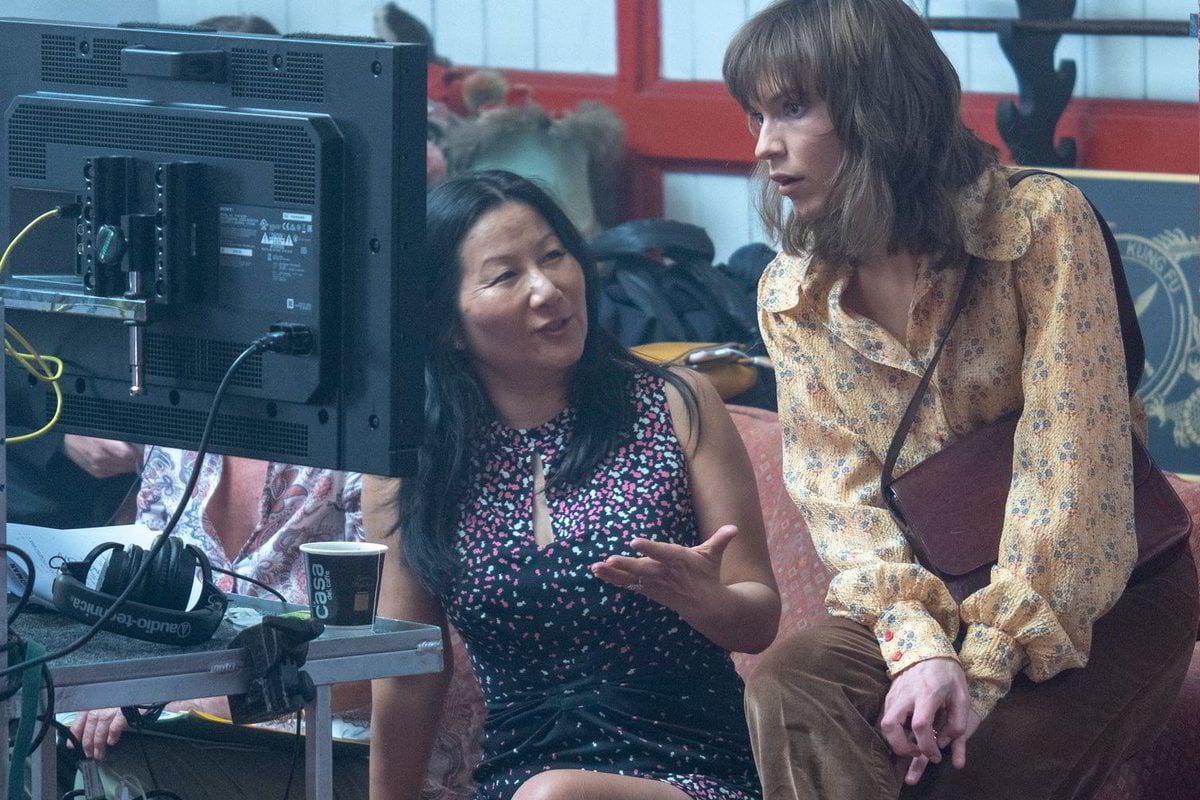 Unjoo Moon is proof that a chance encounter has the power to change your life.

More than six years ago, the Australian filmmaker was attending an awards dinner in Los Angeles, with her cinematographer husband Dion Beebe, and as the couple arrived late and hurried over to their table, Unjoo spotted a familiar face.

Sitting at that table was Helen Reddy, one of the most successful performing artists ever to emerge from Australia, a Grammy-award winning recording artist with a string of hit songs to her name. Including her 1972 smash hit song I Am Woman, which went on to become an anthem for a generation.

As soon as Unjoo laid eyes on her, she was hit with a flood of childhood memories.

"I made my husband swap seats with me so I could speak with Helen over dinner," Unjoo told Mamamia. "Seeing her just reminded me of growing up in Australia as a young girl. My family had not been in Australia for many years at that stage (Unjoo was born in South Korea) so music was such a big thing for us.

"My mother didn’t speak English then but when Helen’s songs came on the radio, they made her feel empowered. She’d wind down the window of her Volvo station wagon and let her hair be loose in the breeze.

"But I had no idea before speaking to Helen that night that her life was so much bigger than people remember, she’s not just one song."

WATCH: Take a look at the trailer for the new Stan Original Film I Am Woman. Post continues below.

It's true that Helen Reddy's life reads like the pages of a captivating movie script.

After winning an Australian talent competition, Helen flew from Australia to New York in 1966 with her three-year-old daughter Traci in tow and just $230 in her pocket.

She thought the competition win had earned her a recording contract, but the label turned her away, saying that their books were already filled with female singers.

Over the next few decades, Helen Reddy's life took extraordinary turns as her hard start in New York led to a skyrocketing career and a highly publicised personal life.

This behind-the-scenes look into the life of one of Australia's greatest musicians is the basis for the new Stan Original film I Am Woman, directed by Unjoo Moon.

It was this chance meeting with Helen that fateful night, and their ongoing friendship, that led to Unjoo directing her first feature film. Telling Helen Reddy's life story on screen for the first time.

I Am Woman, which premieres exclusively on Stan on Friday, August 28, stars Tilda Cobham-Hervey as Helen Reddy, Danielle Macdonald as music journalist Lillian Roxon and Evan Peters as Jeff Wald, Helen's manager and husband throughout the film.

Originally, Unjoo pictured telling Helen's story through a documentary format, but the more she got to know the legendary singer, and the more she learned about the impact her music had had on the world, the more she became convinced that it needed to be a feature film.

"It’s very difficult when you’re making films about real-life people because it not only affects them but it affects their family and the legacy they have built," Unjoo told Mamamia.

"I knew we had to show the finished film to Helen and her family but I was so busy at the time that I didn’t anticipate how difficult it would be.

"We all rushed into the theatre and sat down and that’s when I started to play in my head ‘oh, what if she doesn’t like it?’ What if she feels like it’s not what she thought it was going to be?’

"But then I looked over at Helen and saw that she was singing along to her own songs. She was so engaged in the story and at the end of the movie, when the final cards came up, Helen started to read them out loud.

"And when she read out the last card, that the equal rights amendment has never been put into the US constitution there was a silence.

"Then Helen started to cry.

"We all cried together in that theatre and I realised then we were ok to complete the movie, Helen had seen its impact." 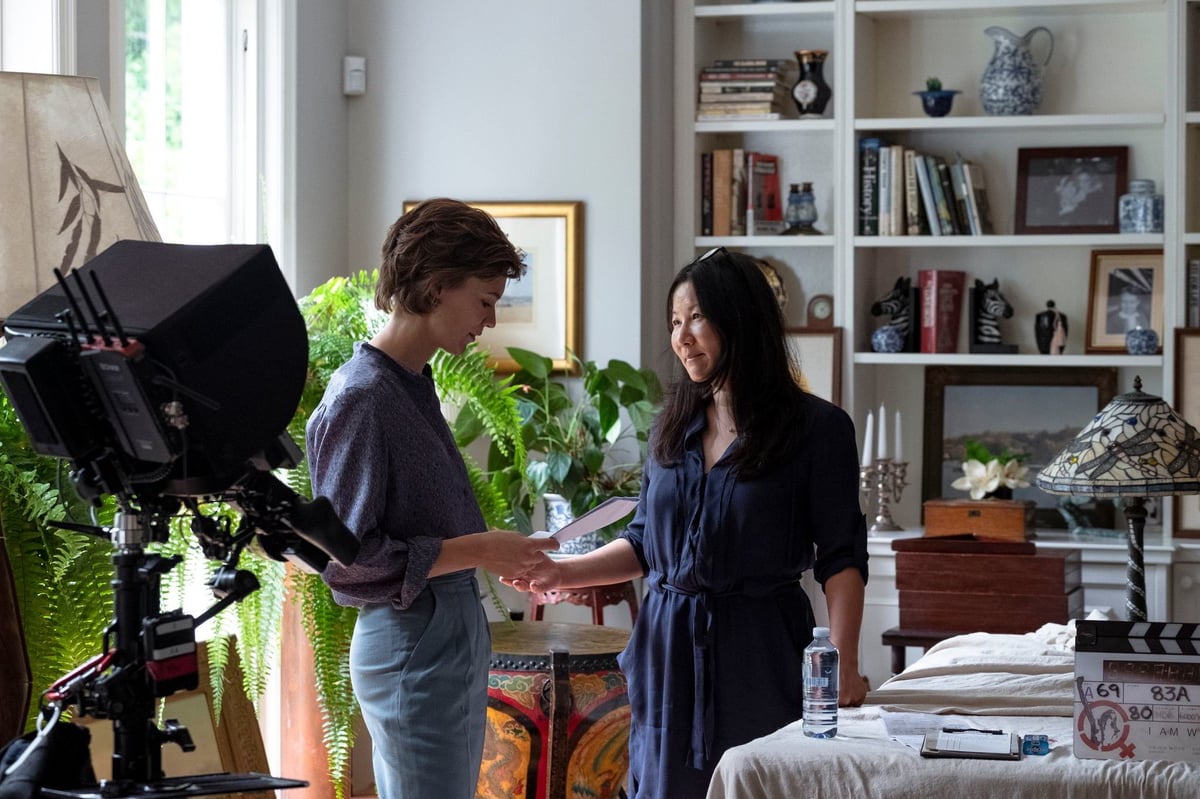 Tilda Cobham-Hervey and Unjoo Moon on the set of I Am Woman with. Image: Stan.

I Am Woman was filmed in Australia and brought together by a group of extraordinarily creative women, directed and co-produced by Unjoo Moon with producer Rosemary Blight, and written by Emma Jensen.

Looking back at the initial production stages of I Am Woman, Unjoo said that she had thought that by the time the public could lay eyes on her movie, the US would have its first female president.

Now, she looks around at a world where women are still marching for equal rights and knows that we need Helen Reddy's messaging and music more than ever.

"The idea of how Helen’s life was interwoven with the women’s movement makes it a story for all women, even now," she said." "I hope people will watch the movie and learn about what has come before us.

"We always knew exactly which scene I Am Woman would end on, so you wouldn’t just experience Helen’s personal journey but you also see the true impact of her music from an audience point of view. In that final scene you feel like you're standing there with all those women, with your fist in the air.

"Knowing that we all still have work to do."

The Stan Original Film I Am Woman will premiere exclusively on Stan on Friday, August 28.