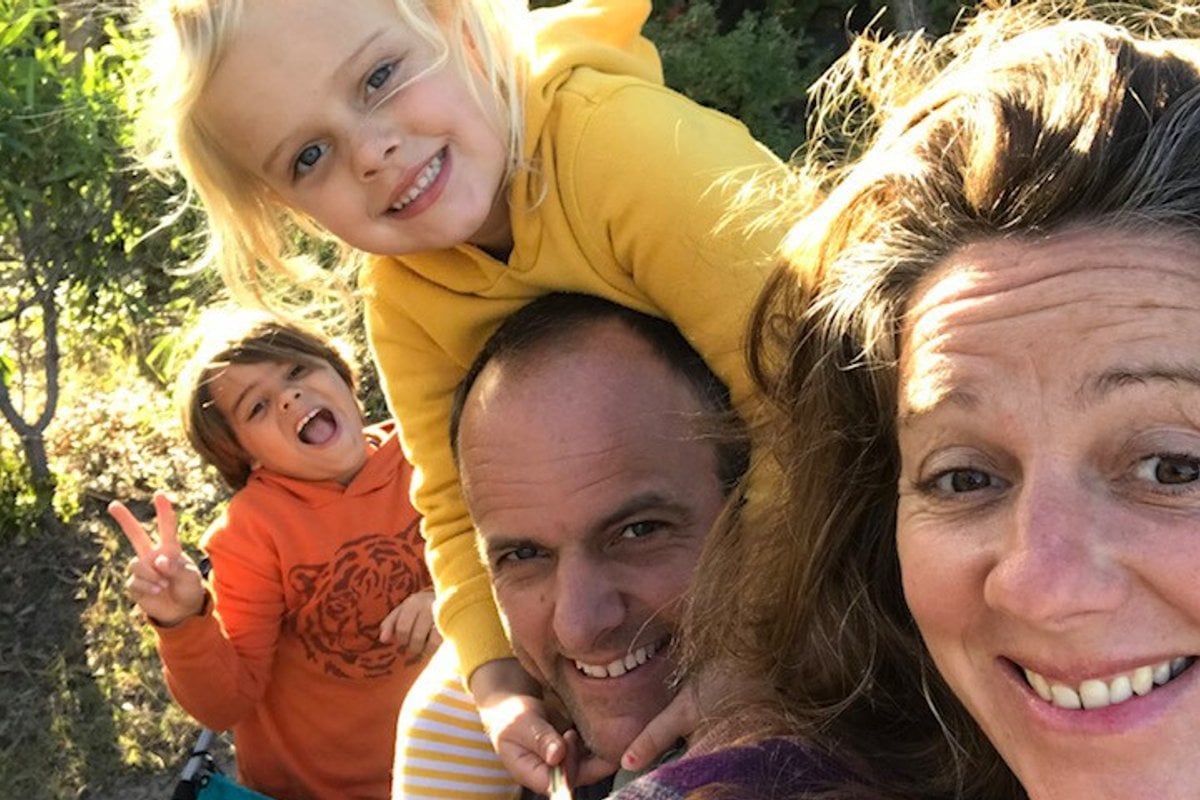 Victoria Vanstone can pinpoint the exact moment she knew she had gone too far with her drinking.

The mum-of-three had come home from a night out drinking with her mother's group where she had admittedly "overdone it".

"I was sick in my handbag in the taxi on the ride home," the 44-year-old told Mamamia. "I went out in a beautiful sequin dress and came home with vomit all down me."

After stumbling through the door, her husband told her to get in the bath to clean up.

"I got in the bath and he hosed me down, like a muddy elephant."

Watch: Here are just some of the effects to your body after one year without drinking alcohol. Post continues below.

The next morning she woke up with a terrible hangover and two young kids to care for.

"It was one hangover too far... The next day I was totally non-functional. I wasn't capable of looking after my child. And those feelings are so overwhelming that it's like your body's reaching out and you need to do something about it."

"That day I thought I cannot do this anymore."

Lying in bed, she was met with the same feelings of shame she would always have after a big night out.

"I had this anxiety of not knowing what I had done the night before, and my behaviour, and how I'd been. But as a parent I had responsibilities now and I would have a baby crying in the room next door while I had my hangover."

"Having all of that guilt and shame of not being a functional mother on a Sunday morning eventually led me to think 'I need help'."

So, in March 2018 she decided to make the phone call and reach out to a local therapist.

Before becoming sober, Victoria considered herself a "socially acceptable alcoholic".

"You'd never pick me out of a crowd... It was the type of drinking that was soaked up by the drinking culture."

"I have been drinking for many, many years. I was always an over-drinker and couldn't stop once I started. I was never alone drinking, it was always with friends."

But when a pregnancy test (that she took hungover) turned up positive, Victoria knew she had to make the transition from "party girl to mother". One that was easier said than done.

"I went from being out all the time and being sociable to then being stuck at home with a baby that I love. But it was a situation that I've never been in before - I was alone with a crying baby with stinky nappies and felt very, very isolated."

"And the only way I knew how to escape or knew how to relieve myself from the boredom I guess... was to drink. And that became my outlet. So, I went out every weekend and got wasted."

Her second pregnancy provided another much-needed "window of sobriety" in her life.

"When I was pregnant. I realised I was capable of having a meal and going out and having normal interactions without drinking. It was a window of hope for me to see, 'actually you can function and you are a capable person without alcohol'."

Now, three years sober and looking back, Victoria has come to realise just how much she lost herself in her drinking years.

"I didn't really realise that my health and my well-being mattered. And when I came out the other side, I had to rediscover who I was and reacquaint myself with who I was before I started drinking."

Giving up alcohol has also changed the way she parents. But she says she's still far from perfect.

"Stopping drinking doesn't make me a perfect parent. I'm still probably a rubbish mum sometimes and yell at he kids too much. But what I am now is an available parent and I'm much happier and that is so important."

Listen to Victoria's interview on This Glorious Mess. Post continues below.

But for Victoria, the road to sobriety wasn't always easy, in fact it was a "zig zaggy journey" which involved four years of attempting moderation and failing at it.

"It took me four years to get to that point of continuing those same habits because I couldn't see a life without alcohol. Part of my personality was being known as a 'fun girl'."

At the time, Victoria said she found herself stuck between "the pub and an AA meeting".

"That's where I sat for so long and I felt totally isolated because I didn't feel that there was anyone out there to help me."

She says 'Mummy wine culture' and social drinking also blurs the line, making it hard for women to feel that they firstly need help, and that they actually deserve it too.

"It's important to know that [Mummy wine culture] and that sort of drinking is a form of alcoholism, you do fit somewhere on this vast alcohol spectrum. Just because you're not out in the streets with a bottle of Jack Daniels in your hand it doesn't mean you're not deserving of professional help."

"So I think it's really important for women to know that you don't have to hit rock bottom to seek help. You can reach for it now, solve your problems and live a much happier life."

It's this message that she hopes to get across in her podcast, Sober Awkward, that she co-hosts with her friend Lucy Good.

"Perhaps if we can talk about these things, then you won't live in this grey area for too long and you'll reach out and get help."

"We also discus all those awkward things about sobriety - like telling people, moderation and about going out for the first time. Our motto is: 'feel the awkward and do it anyway'."

For those thinking about starting down a path of sobriety, Victoria has one main piece of advice.

"Don't beat yourself up about failing at moderation. Because that's just part of sobriety... You have to go on this journey that is difficult and sometimes involves failure."

"It's important to know that it's not all rainbows and unicorns but it's part of your path which is going to make you become your authentic self and who you really are. And that is really satisfying."

For more from Victoria, you can visit her blog or follow The Sober Social for Sober Curious Women Facebook group.