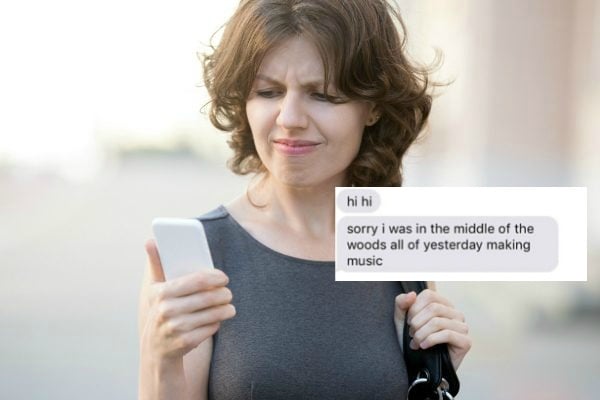 As any single person in 2019 can attest, it can be rough out there in the dating realm.

Especially when there’s a whole host of terrifying new types of f*ckboys to steer clear of.

One addition joining the mix over the past few years is of course the softboi (the street name for a fake nice guy), who we can almost guarantee you’ve encountered at least once.

Urban Dictionary (a fine source of literary enlightenment, thank you very much) defines a softboi as “similar to a f*ckboy but without the cocky attitude. Differs from the f*ckboy because he goes for the heart and emotions rather than just the body”.

The softboi, in other words, is a wolf in sheep’s clothing. The snake of the modern dating world. He’s manipulative, he’s calculated, but guys – as he’ll tell you when it eventually comes to an end – it’s because he’s complicated.

His online dating profile in no way indicates that he’s “looking for fun”. Instead, he’s “in touch with his feminine side”,  and claims he’s after someone to “take his dog for walks with” and to “eat pizza/ice cream/(insert delicious food here) with”.

Listen to Mamamia Out Loud discuss the softboi below. Post continues after podcast.

He wants you to know he’s emotionally intelligent, socially aware and “woke”. He wouldn’t ghost you. He’s not like that.

Because he knows he’s not going to win you over by being a misogynist (i.e. asking for nudes after the first date), he plays the complete opposite role. In the end, the fact he sees you as an object to “win over” by lulling you into a false sense of security makes him far, far worse than the traditional f*ck boy. At least they’re a little more upfront about it.

Now that we’ve identified the nuances of a softboi, let us provide you with some examples, shall we?

Enter @beam_me_up_softboi, the Instagram account that is providing us with an endless stream of hilarious, cringeworthy and sometimes utterly terrifying softboi musings. It’s an account you definitely need to follow if you’re done with these pretentious types (or perhaps need to know what to look out for).

It’s run by 21-year-old student Iona from Manchester, who last year told Dazed it exists as “a selection of the best and the worst softbois this planet has to offer”.

Iona started the account as an everlasting group therapy session of sorts.

“(It’s) a combination of funny things that harmless – if sometimes patronising – indie boys have said, and then slightly darker ones where the same softboi tactic is used in quite a weird way, basically as an excuse for being a bit of a twat,” she told the website.

Although softbois are often seen as one of the worst types of f*ckboy out there, Iona thinks we shouldn’t be taking it all so seriously. After all, “everyone is a bit of a softboi,” she says.

“Sorry everyone, there’s no escaping your softboi fate.”

Here, we present you with some of the account’s best recent submissions (they’re… frighteningly familiar):

either i’m pissed or this is fucking hilarious

“excuse for standing me up at half past 10 at night”

That last one is particularly triggering.

And there’s plenty more where that came from.

The entire feed is an eye-opening accumulation of messages we’ve seen far too often. We even have the receipts to prove it.

Here is a short collection of softboi messages from the Mamamia office:

Gaslighting, but make it a compliment:

When all *Tom wanted to do was "come over and eat nuggets":

When *Alex almost broke in to "just hang out and watch movies":

And finally, Jak and his abhorrent behaviour (not to mention abuse of emojis):

We're all in this together.

Do you have any softboi lines you'd like to share? Let us know in the comments below.