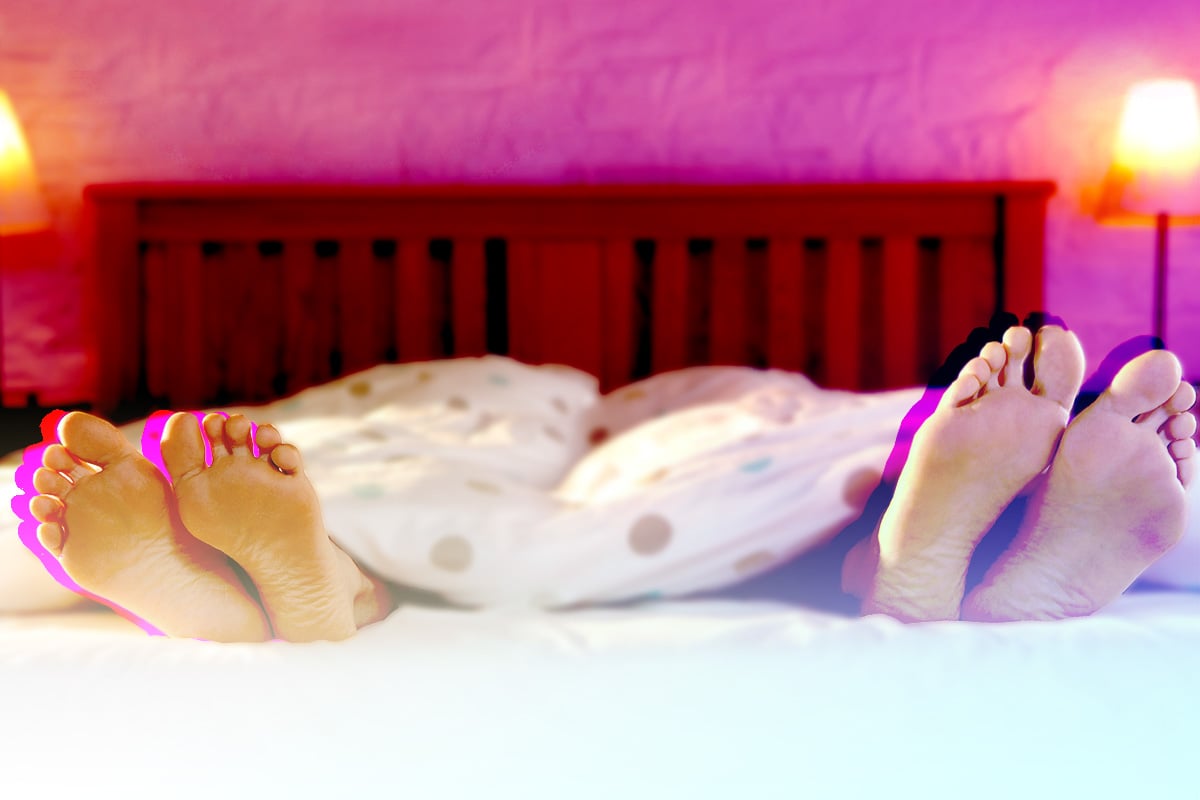 Welcome to The Unspeakables, a series by Mamamia that tells unflinchingly honest stories about being a woman - whatever that looks like - in 2021. You can find out more about    The Unspeakables here.

My husband and I have been together 17 years, married for 12 of those.

We have had lots of ups and downs over our years together, but are happily partnered and probably more committed now than we have ever been.

I think one of the reasons we are so content at this point in our relationship is that we are really honest about what we want and need from our marriage.

About a year ago, we admitted that we would probably always have to sleep in separate rooms.

I used to feel so ashamed of this. I worried so much what people would think about our relationship if they found out we sleep separately, and was too scared to tell anyone.

But last year, after lots of chats with my husband, my best friend and my psychologist, I realised this was nonsense - that sleeping separately was the best thing for our marriage and other people’s judgements were irrelevant.

Sleeping separately means we both get the sleep we need, which with two young children and a big life, is essential.

I stopped being ashamed of our decision and started owning it; I recognised that we have shaped our marriage in a way that works best for us.

Plus, I realised how important it is to share honest stories of real partnerships, and the different ways people 'do' them.

So I put the word out to the Mamamia community asking people to share their relationship stories that don’t fit the traditional mould, but work best for the people involved.

"My partner and I live in separate states. It hasn’t been the easiest in COVID times, but we’ve still managed to see each other a few times.

We’ve been together for about 10 years and have always been long distance. We thought about marrying and living together in the early days but it never felt quite right.

I seriously have no interest now - I have my life, he has his, we enjoy sharing parts of it, but not everything.

I like my house the way I like it. I want to keep my assets for my children, and he feels the same. We’re committed and exclusive, but our lives are bigger than our relationship." 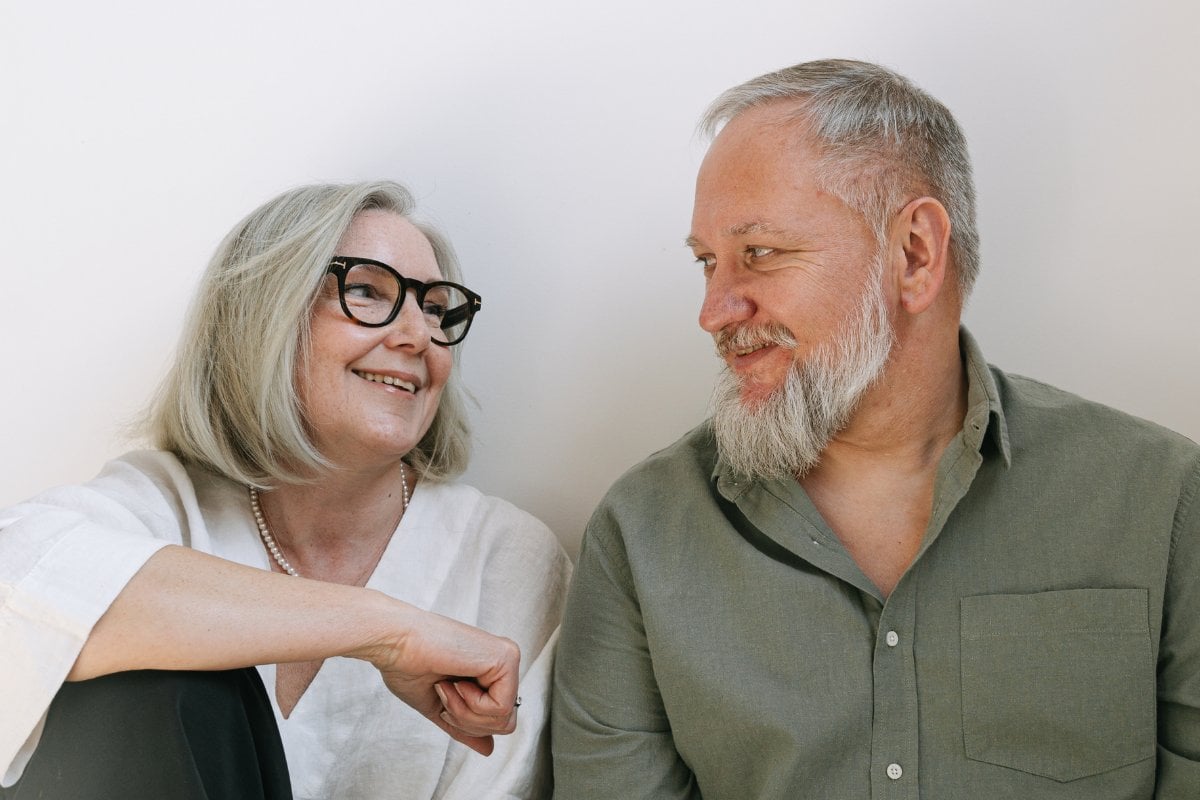 "I’ve been with my partner nine years, and about two years ago I suggested we open up the relationship, which he was also keen to try.

We got together when we were really young and haven’t dated many other people, so this gave us the chance to explore dating.

We’re really honest about our dates and experiences with other people, we share all the nitty-gritty details and regularly text each other when we’re out with other people. He’ll even drop me off and pick me up.

Currently, our relationship would be considered 'open', because we’re both just casually dating other people, but in future I would like to be polyamorous and find an additional person to have a relationship with."

"My wife and I have completely different friends, something that I think is regarded as totally normal for heterosexual couples but some consider strange because we’re a same-sex couple.

My wife loves bike riding and has a group of friends she goes on rides with most mornings. Whereas sport holds no interest for me at all - I like to go to see plays with girlfriends, and am in a book club with a bunch of women, both things that don’t interest my wife.

She and I still do lots of things together, we have a son who keeps us busy, we hang out with our families, but we just don’t hang out with each other’s friends."

"We’ve been married 15 years and for about 12 years we’ve basically been platonic and slept in separate bedrooms.

A couple of years ago we agreed we could do our own thing as long as we were discreet. I don’t think either of us is interested in ending our marriage - we want to keep things the same for the children, we’re good friends, we parent well together and we work together - so this dynamic works for us, and neither of us want to disturb it."

"My partner of 12 years and I keep our money completely separate, something my kids find really strange, but I really like it.

I was married before and my ex would monitor what I spent. We had a joint account and a mortgage account and I felt like I had to go begging to him when I wanted to buy a new dress or go for lunch with a girlfriend.

With my current partner, we agreed that we’d split all shared costs (mortgage, electricity bill, gas bill etc) down the middle, each of us paying our half, and everything else we keep separate.

I see my (grown up) kids roll their eyes at us when we go out for dinner and he pays for himself and his children and I pay for myself and my children, but we both like it like this. I feel more in control and independent."

"My husband and I have been together for 12 years, married for 10 years, and we started opening up our relationship about three years ago.

We’ve met lots of gorgeous people that we’ve developed friendships with (although COVID has meant we can’t play together much). The playing itself is really fun, but afterwards it is so nice to be with your person again.

I think that’s a big part of why we do it - we love watching each other enjoy other people, and then coming back together."

"My girlfriend and I have been together for five years now but live separately, and I don’t think either of us wants to change this.

We don’t want children, so that’s not a factor, and we like our space.

I live in a granny flat under my Mum’s house and I like being around to help her (she’s getting older). And my girlfriend lives about two suburbs away in a flat she bought years ago, before we were together.

We stay together a few nights a week, but then we can be apart too. Also, she has just gone back to study law, so she needs space and quiet to study."

"Ever since I had my third child I have not been at all interested in sex. That was four years ago.

I still really love my husband, he’s my best friend and such a great father, but I don’t want him to touch me sexually.

Sometimes we’ll have a cuddle on the couch or give each other a quick kiss, but other than that we are completely chaste. We like the comfort of sleeping next to each other so we still sleep in the same bed - it’s a habit, really.

We’ve talked about breaking up, but for now neither of us want this. I’ve also asked him if he wants to have sex outside the marriage and he’s said no for now.

All of this may change in the future and I do actually hope I get a sex drive back someday (I’ve been talking with a counsellor about it), but for now we are both okay with how things are."

"My partner and I always go on separate holidays. We’ve done this since the kids left home nine years ago. He is not a sun, surf, sand person and I love the beach so off I trot to Noosa each year and he either stays home or he goes to a golf resort with his brother for a few days.

When we could, we went on holidays overseas together a few times, but every February without fail I head north to the beach and he is not interested, which suits me just fine (we’ve been married 28 years, we’re used to each other)."

"Last year my husband I decided to sleep in separate bedrooms. We actually still have a really active sex life but we like to sleep alone. I’m home full-time with our three-year-old twins, plus we have an older son who has an intellectual disability so by the end of the day I’m exhausted - I just want to go to bed and sleep.

We’ll 'visit' each other a couple of times a week, but the actual sleeping part is separate."

Reply
Upvote
7 upvotes
My husband and I sleep in separate bedrooms. It started after my first child and he was still working so would sleep separately to get a good sleep. And even after both kids we’re both shift workers, I’m a really light sleeper and I’m also a snorer so we just continued. We still have a regular sex life and I honestly can’t see him ever moving back in. I think the whole sleeping together thing was just something created by poverty and necessity in olden days, I’m certainly never ashamed to tell anyone
News
General
Opinion
True Crime
Politics
Sport
Explainer
Entertainment
Celebrity
Reality TV
Movies
TV
Books
Rogue
Royal
Lifestyle
Beauty
Fashion
Weddings
Home
Wellness
Health
Fitness
Travel
Food
Parents
Before The Bump
Pregnancy
Baby
Kids
Teens
School
Parent Opinion
Work & Money
Money
Finance
Career
Lady Startup
Relationships
Sex
Dating
Separation
Friendship
Family
Real Life
Couples