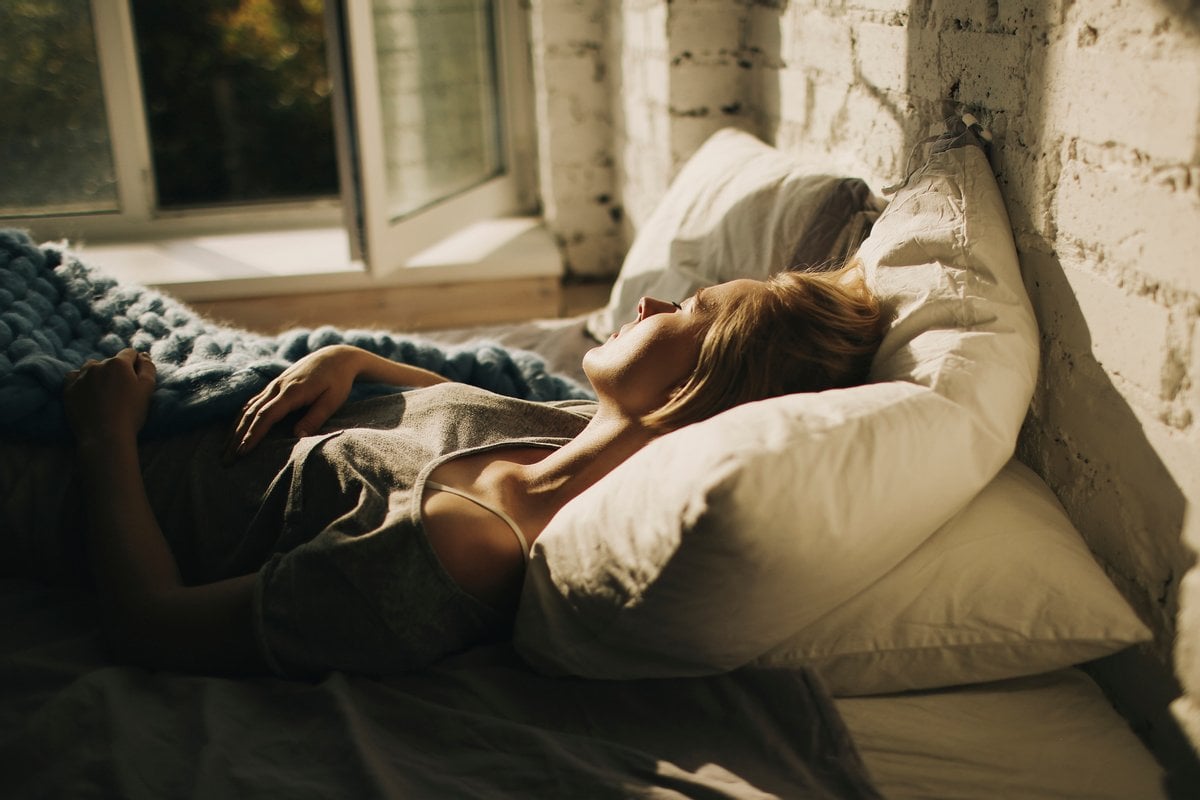 Recently I found myself in a conversation at playgroup that astounded me with how normal it should be, but how oddly taboo it was.

It was about married and committed couples sleeping in separate bedrooms.

So, let me introduce myself. I am a 39-year-old mother of two. My boys are six and 20 months, and my husband and I have been married 12 years, together for 17 years. And we sleep in separate bedrooms.

Side note: Here's exactly how long you should be napping for. Post continues below.

We do this for a number of reasons, which I’ll get into later, but back to the playgroup conversation.

One of the lovely Mums in the group I was with said something, accidentally, that indicated that she and her husband had begun sleeping in separate bedrooms.

She was mortified and ashamed that she’d let this slip. She didn’t want anyone to know, she was so worried about what people would think.

I don’t know her very well yet, but like her a lot and feel we are on a path to becoming friends, so I happily piped up and shared that my husband and I sleep in separate rooms because of health reasons and different sleep needs (and cheekily added, "But you know, we still have sex, occasionally.")

Everyone laughed, because another taboo truth that is rarely discussed is that when you’re married with small children it can be hard to find the time, space or inclination to have sex very often.

From my observation, this is not about denial by one partner, or a reduction in love or attraction, but a conglomeration of factors that range from women recovering from birth injuries, to living on different schedules due to work and childcare, to rarely finding the time or energy, to losing sexual intimacy for stretches of time due to the intensity of parenting, to being so bloody exhausted that you both choose an extra 30 minutes of sleep over 30 minutes of loving.

This is not everyone of course, and I know people who are more frisky than ever and use sex as their joint stress relief or reconnection tool during busy days, but I also know lots of people for whom it’s just on the backburner for awhile.

Anyway, back to the separate bedroom thing. My new not-quite-friends-yet friend shared that she and her partner just slept better in separate rooms, but she didn’t like sharing this because she worried that other people would think their relationship was on the rocks.

In reality though, it was the best thing for both of them, and she was really enjoying the extra time to read and relax on her own each evening. She was even planning to decorate her sleeping room with things she liked, so it became a haven for her, ‘a room of one’s own’ if you will.

Another mother in this group then piped up and shared that she and her husband did separate bedrooms at intervals.

Sometimes they did the ‘divide and conquer’ routine with their young children, with one parent in each under-four-year-old’s room.

Other times, even when the children were sleeping relatively well, she still took herself off to the spare room some nights, because between early shifts in her physical job, and being with her three children every other minute of her life, she just needed a bit of alone time. But then other times they were really happy cuddled up side by side for the night in the marital bed.

Then I shared how my husband has an autoimmune disorder that affects his sleep, and I have had major issues with snoring in the past (I had jaw surgery last year to fix it, but it was an issue my whole adult life before this) so we now have sleep needs and routines that are basically incompatible.

In fact, we would love to share a bed, because we are both ardent snugglers, but it just doesn’t work for us in terms of us getting the sleep we need.

And I think all of us - even the women who didn’t share their sleep stories with the group – breathed out deep sighs of relief, because we’d shined a little light on a topic that is often a source of shame for so many couples.

It was another time when I felt so incredibly lucky to be a woman, because we talk about these things, even amongst women we don’t know very well, and through this we offer each other solace and release.

Reply
Upvote
2 upvotes
Seperate bedrooms is a great idea, then everyone has a space that their own and they can arrange it exactly how they like. I would go insane if I had to spend every moment sharing space with my partner, and I’m never going to stop throwing my clothes on the floor exactly where I want them in piles that only I can differentiate.
Couples sleeping together is only something that was adopted to save space, until the last 50 years anyone who could afford to have seperate bedrooms did. It’s so much nicer to have two rooms and then be able to invite the other person to join you.
K
k8mer 8 months ago

Reply
Upvote
5 upvotes
I once shared with a mother’s group that my husband and I slept in separate beds. I joked that it was for his safety because I would smother him in his sleep because of his snoring. I was 100% shamed by this group of women, all of them judged me and my relationship and felt the need to list all of the reasons why separate bedrooms meant my relationship was doomed. Not all of them spoke, but several vocal ones were nodded along with. Needless to say, I stopped attending that group several weeks later. They were not my people. My husband and I have been together for another 10 years since that conversation, in fact we’ve been together for 22 years this year. Our sex life is great, we are also very good friends and laugh together all the time, none of which would be true if he kept me awake with his snoring every night.
News
General
Opinion
True Crime
Politics
Sport
Explainer
Entertainment
Celebrity
Reality TV
Movies
TV
Books
Rogue
Royal
Lifestyle
Beauty
Fashion
Weddings
Home
Wellness
Health
Fitness
Travel
Food
Parents
Before The Bump
Pregnancy
Baby
Kids
Teens
School
Parent Opinion
Work & Money
Money
Finance
Career
Lady Startup
Relationships
Sex
Dating
Separation
Friendship
Family
Real Life
Couples