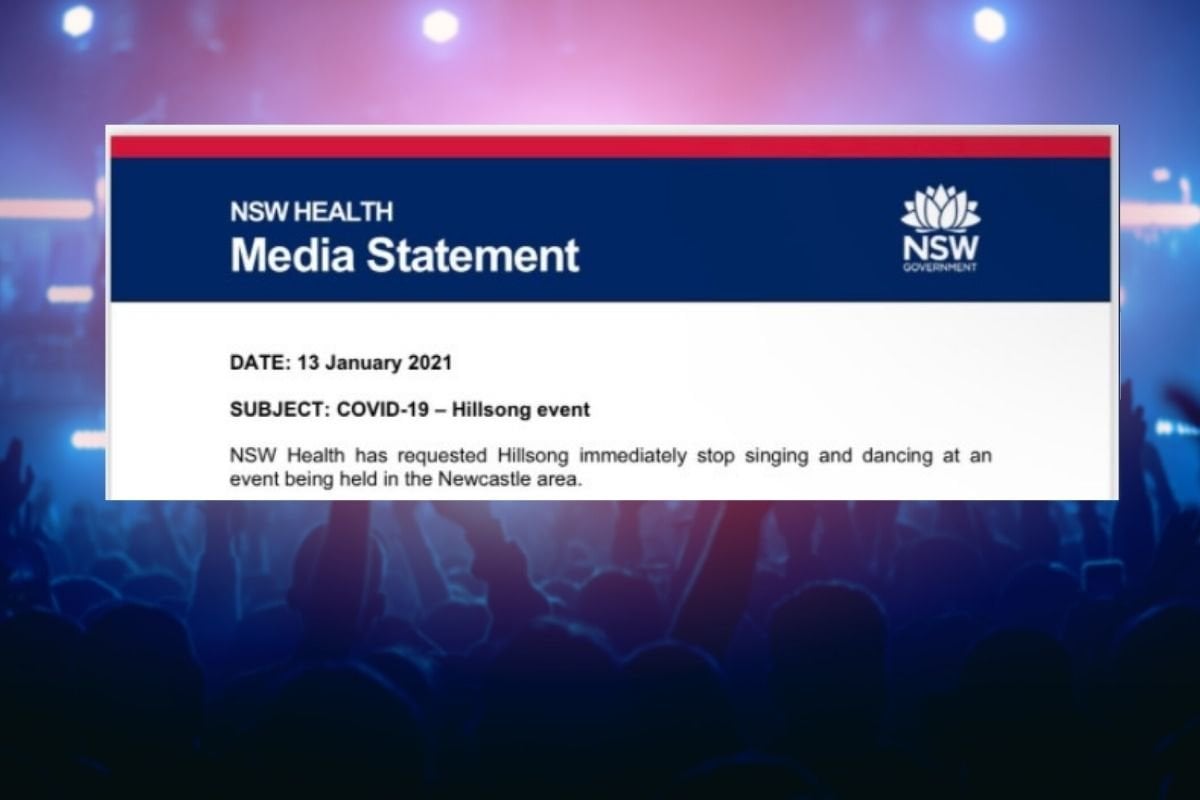 From the ages of 14 to 24, I was a born-again Christian. My church was originally an off-shoot of Hillsong, one started by pastors who were within the Hillsong congregation in the early days. So we were still encouraged to attend all the major Hillsong events.

I have been at events like Summercamp, the Newcastle-based youth retreat currently under fire for going ahead amid spiking COVID cases in NSW and a slew of state-mandated rules against singing and dancing.

Scores of Australian artists and event organisers have lost money this week. But not Hillsong.

If you’ve ever seen pictures of a Hillsong Church service, you would have seen how similar it looks to a concert - it's like a major Aussie band on a national tour. There’s fancy lighting and a state-of-the-art sound system booming. People dancing and jumping around, singing euphorically, hands in the air. This isn’t some traditional religious church service where there are a dozen people in pews softly singing to the Lord.

Take that regular service and multiply it big time? Then you’ve got Hillsong Conference.

Hillsong Conference is the church’s annual major event. It’s on in July, and in 2022, will be held at Qudos Bank Arena. In 2018, they sold out the venue. That’s 21,000 people. I went to every Hillsong Conference in those 10 years of church life, my first three years being via the corresponding youth conference held in a smaller, but still pretty huge venue within Sydney Olympic Park.

Put a pack of teenagers in one place, with a great band, games and some hyped-up hosts, and you’re going to see a lot of not exactly COVID-safe activity going down, no matter how hard you try to police it.

See, Hillsong were careful to put a COVID safety plan in place. Their website explains that every guest is expected to take a rapid antigen test that will be "provided at each departure location", plus temperature checks. "All activities will be conducted in line with government health orders and applicable COVID safety plans," the website reads.

Except we've seen the footage. Whether the organisers at Hillsong expected it or not, at least one event at the camp saw a huge crowd of unmasked teens getting jubilantly rowdy to DJ Snake’s 'Turn Down For What'.

NSW Health intervened on that one, thankfully. But what I’m really thinking is - why were churches exempt from the no singing and dancing rule in the first place? While so many other music festivals and gigs were affected by the change in restrictions, religious services slipped past quietly, when really the risk level is no different.

I have nothing against Hillsong, or other religious groups celebrating their faith. I am not religious anymore, but I would never want those who are to be denied the freedom to express themselves.

My issue is with the blatant double standard here.

There is nothing, from my experience, that separates a Hillsong event from a gig or music festival. So when I read a statement from a Hillsong spokesperson given to The Guardian saying, "These events are our annual high school-aged youth camps, and are not similar to a music festival in any way," followed by "and any singing is only a small part of each service," I could not believe the dishonesty.

These events are as sweaty and rowdy and euphoric as a festival, absolutely. Why wouldn’t they be? Church, when you are a part of it, is a joyous place to be. It’s entirely about celebrating the Lord and your connection with each other, so of course it’s going to be difficult to keep things COVID-safe.

You’d think we would have moved beyond the archaic idea that religion gets to have special exemptions from rules that apply to the rest of society. We are a rich, multicultural, diverse nation in 2022 and religion really should have no place in politics anymore. Yet, here we are. Bands, venues and large-scale events losing money and punters missing out, but religious groups squeezing through via exemptions.

It’s good to see NSW Health responding to the outrage in some capacity. I’m glad they responded quickly to the circulating footage and put the same ban on singing and dancing in place. But it’s not enough.

I want to see a fine handed down, or even better - for Hillsong to take the onus upon themselves and donate to local hospitals who are bearing the brunt of super-spreader events like this one could very easily be. I want to see them give some of the proceeds to small Australian artists who have struggled so deeply for the last two years. Most of all, I want to see the rules include religious services, at least over a certain threshold.

While the church has since issued an apology, it was for "giving any perception" of not helping to keep NSW safe. What we saw in the footage can’t be mistaken - this was not keeping NSW safe, no perception issues about it.

This is a tax-exempt million-dollar church that should have known better, and that maskless, rowdy crowd was like a massive "f*ck you" to all the bands, promoters and event organisers that have suffered over the last two years.

These are trying times. The only way it feels like we’re in this together is if, you know, we’re actually in this together. It’s offensive to see certain groups get exemptions simply because what they call worship, we call having fun.

If our government is going to put restrictions in place, let them be fair, because having one portion of society suffering while another gets a free pass to celebrate is not what we need right now.

Reply
Upvote
There are loads of rules that don't make sense and always people ready to exploit the loophole rather than act in good faith.
They may have imported rapid tests - lots of people I know are being sent them from overseas family etc.
C
cat 8 days ago