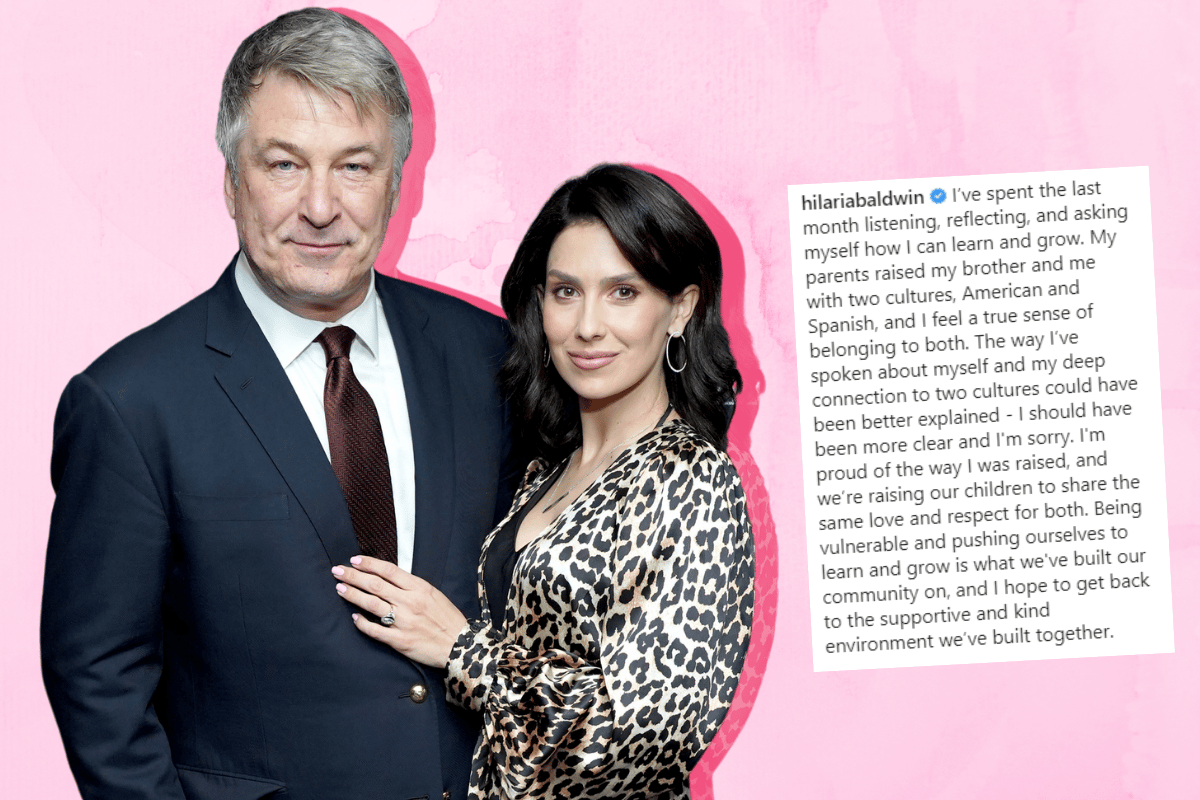 In December, Hilaria Baldwin found herself at the centre of a very peculiar Twitter investigation.

Thanks to a now-viral Twitter thread, many claimed that the 37-year-old yoga teacher and author would sometimes 'pretend' to be Spanish.

On December 21, Twitter user @lenibriscoe posted "You have to admire Hilaria Baldwin’s commitment to her decade long grift where she impersonates a Spanish person."

They then proceeded to share a series of videos of Hilaria speaking with a Spanish accent, which sounded noticeably different to other clips of her speaking with an American accent.

In one video, the 37-year-old even seemed to forget the 'English' word for cucumber.

Another video also showed Hilaria’s mother supposedly talking at a conference with an American accent.

After a slew of tweets and comments made by the Baldwin family, the world was left scratching its head.

Now, after weeks of social media silence, Hilaria has returned to Instagram with an apology.

"I’ve spent the last month listening, reflecting, and asking myself how I can learn and grow," she began the post.

"My parents raised my brother and me with two cultures, American and Spanish, and I feel a true sense of belonging to both."

The mother-of-five went on to apologise for the confusion.

"The way I’ve spoken about myself and my deep connection to two cultures could have been better explained – I should have been more clear and I’m sorry.

"I’m proud of the way I was raised, and we’re raising our children to share the same love and respect for both. Being vulnerable and pushing ourselves to learn and grow is what we’ve built our community on, and I hope to get back to the supportive and kind environment we’ve built together."

Hilaria previously addressed her upbringing in a video she posted on Instagram in December.

"I’m really lucky that I grew up speaking two languages and I’m trying to raise my kids so that they speak two languages."

"I try to speak more clearly in each language. That is something I should try to do. But sometimes I mess it up. It’s not something I’m 'playing' at, so I want that to be very, very, very clear."

She also addressed the confusion surrounding her name, after claims that she previously went by the name "Hillary," but later changed it to "Hilaria".

"Then a handful of years before I met [her husband] Alec, I decided to consolidate the two because there were so many documents and I had so many different things. Even things like going to pick up a prescription I’d be like, ‘I don’t know what you have on file’. So I consolidated and I identify more with ‘Hilaria’ because that’s what my family calls me and one of things I love is that ‘Hilaria’ means ‘happy’."

Hilaria signed off the video by saying, "This is who I am, and my life story - and it might not fit into your cookie cutter, or your label, but it’s my weird mix of who I am."

For more on this topic read:

An Amy Schumer joke and a 'fake' Spanish accent: Why everyone's talking about Hilaria Baldwin.

Reply
Upvote
She lied, simple as that.  For someone speaking English as a second language, she sure uses "like" in a hugely American way.  All over a snit on social media where she had to rush in for her few minutes of fame when Amy posted her post baby shots.  She just keeps adding to it.  I use my legal name when appropriate.  I have a nickname.
G
guest147 2 years ago

Reply
Upvote
1 upvotes
As a person who moved around during childhood as well, I can understand how someone might identify with more than one place in the world. I have many friends who speak more than one language and get their words and accents mixed up, and I have never given it a second thought or gotten upset with them about it. I have friends who have moved overseas and now speak differently than they once did. I have not once blinked an eye become upset with them over it....I think it is pretty normal to change with one's surroundings, isn't it? Or have parts of your childhood come out in adulthood?
I am not following this story extremely closely so maybe I have missed something. It just seems odd to me that this is such a big story and has provoked a lot of anger. Maybe someone can explain what I am obviously missing?
M
mamamia-user-482898552 2 years ago

Reply
Upvote
1 upvotes
@guest147 She basically claimed to BE Spanish, to the point of implying she had Spanish parentage (whereas in truth, her parents were born and raised in the US with no Spanish heritage - they moved to Spain in retirement). She has implied she immigrated to the US in the past (again, false). She speaks with a (shaky) Spanish accent, despite being born and raised in the US - other times her accent is perfectly American. She feigns not remembering the English word for things, when English is her first language. Essentially she's harnessed being "exotic" by way of cultural appropriation, rather than owning who she is, which is a white chick born and raised in Boston, who spent a lot of time holidaying in Spain as a child.
Basically, she's not claimed an appreciation of a culture, she's appropriated it.
C
cat 2 years ago

Reply
Upvote
1 upvotes
@guest147 I think it’s more that she tried to hide her actual background. She grew up in a wealthy family in the Pacific Northwest and went to a fancy private school. But even when former classmates brought it up, she claimed to have had this trans-continental life and implied her parents were Spanish, (they were American doctors). She’s totally welcome to enjoy Spain and Spanish things, of course, but trying to cover up your past makes people suspicious. And it’s double annoying to see someone with a really privileged start in life pretending to be a migrant, especially in the US where there are so many Spanish-does king migrants exploited every day.
If she’d just said she’d really wanted to be Spanish when this all started, everyone would have been confused but moved on. But she kept lying again and again and that’s what makes people angry.
H
hilarious 2 years ago

Reply
Upvote
People are just jealous of her. They'd vehemently deny it, but it's true or else they wouldn't care so much about it.
M
mamamia-user-482898552 2 years ago