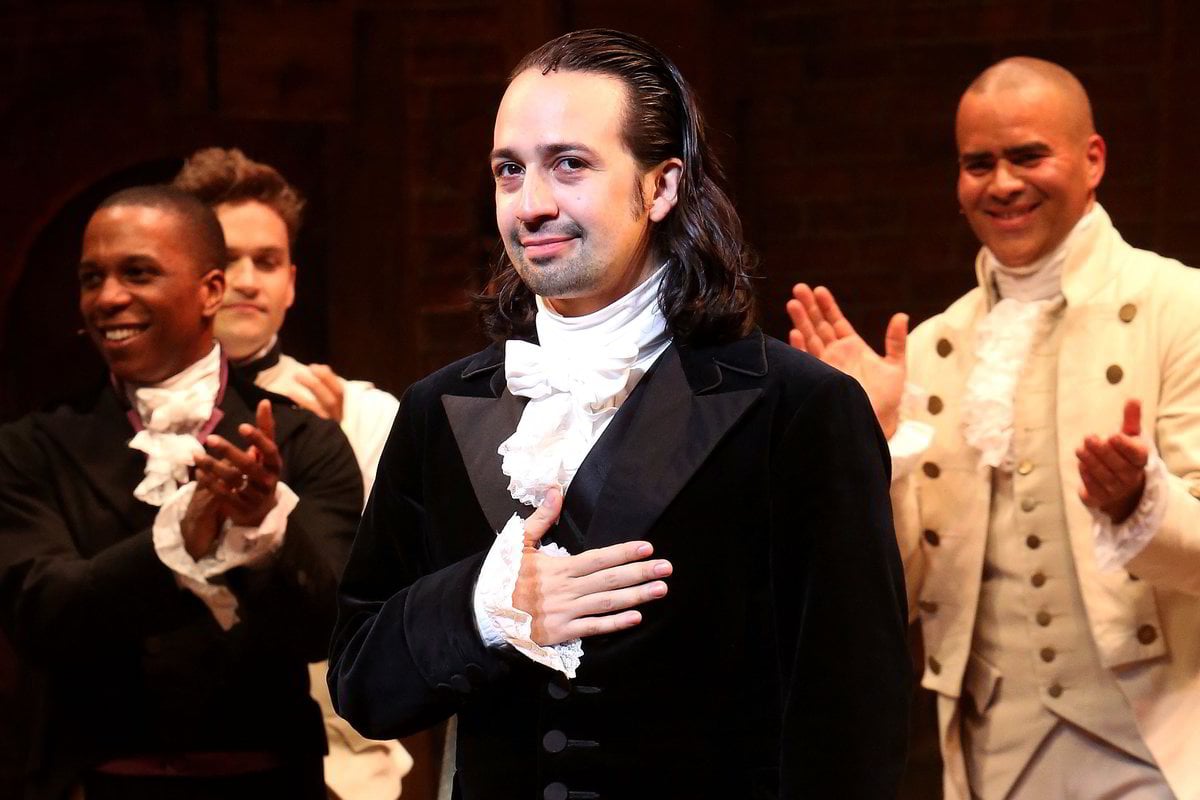 Warning: This post contains spoilers for Hamilton. If you haven’t seen the musical film yet, bookmark us and come back once you’re ready to properly debrief.

It's been just over a month since Hamilton dropped on Disney Plus and it's safe to say that the world is still entirely obsessed.

The film, which is a live stage recording of the award-winning Broadway musical of the same name, follows the rise and fall of one of the Founding Fathers of America, Alexander Hamilton.

The musical, which became a cultural phenomenon when it first debuted on Broadway in 2015, was written by Lin-Manuel Miranda after he read Ron Chernow's 2004 biography of Alexander Hamilton.

Watch the official trailer for Hamilton on Disney Plus below. Post continues after video.

After reading the biography in 2008, Miranda spent a total of seven years working on the songs that would form Hamilton: An American Musical.

One particular song, 'My Shot', took Miranda an entire year to write.

As a result of the time Miranda spent working on the songs, the music from Hamilton is jam-packed with a bunch of subtle references, pop culture nods, and of course, plenty of nudges to history.

From a nod to The Beatles to a bunch of subtle hip-hop references, the musical contains dozens of tiny details.

Here are nine of the details you might have missed in Hamilton:

In theatre, the so-called curse of Macbeth brings bad luck to any production where someone says the character's name inside the theatre.

In fact, to avoid "bad luck", some theatre professionals have been known to refer to Macbeth as the "Scottish Play".

In Hamilton, Angelica and Hamilton share a Shakespeare call-and-response when they quote lines from Macbeth.

"I trust you’ll understand the reference to another Scottish tragedy without my having to name the play," Hamilton sings, carefully using the term "Scottish tragedy".

But in the next line, there's a direct mention of Macbeth.

"They think me Macbeth and ambition my folly."

While the Founding Fathers of the United States perform R&B and hip-hop inspired songs, King George III's songs in Hamilton are cleverly inspired by the music of British bands, including The Monkees and The Beatles.

Speaking to Vogue, Jonathan Groff, who played King George III in the original cast, discussed the song 'You'll Be Back'.

"It’s a throwback to a sixties Beatles tune. And it’s a breakup song between America and England, which is fabulous. He’s like, 'You’re leaving me? Oh, really? Well, good luck with that,'" he said.

The song even has a bunch of subtle Beatles references.

"The drums — a-ts-ts-ts-ts, ta-ts-ts — are a fill I know I stole from Ringo [Starr]. And the way [Jonathan] Groff intones, 'Everybody!' at the end is a little like [John] Lennon in 'All You Need Is Love,'" Hamilton music director Alex Lacamoire told Vulture. 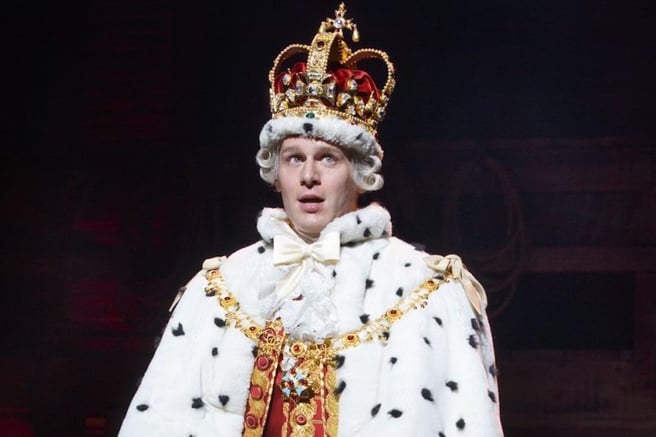 The Reynolds Pamphlet uses the actual lines from the pamphlet.

After Hamilton is confronted by James Madison, Aaron Burr, and Thomas Jefferson, he writes the infamous Reynolds Pamphlet, in which he shares the details of his affair with Maria.

In the musical, the song actually uses many of the exact lines from the real pamphlet which was penned in 1797.

In the Hamilton film, the pre-show announcement and intermission are both included to give fans a similar experience to watching the show on Broadway.

In the pre-show announcement, King George III (Jonathan Groff) welcomes everyone to "my show"... despite the fact that he's only a minor character in the musical.

In 'One Last Time', George Washington quotes a line of scripture to Hamilton, singing, "Everyone shall sit under their own vine and fig tree. And no one shall make them afraid."

According to the Mount Vernon Museum, this was a popular phrase Washington often used.

"George Washington used this phrase multiple times in correspondence throughout his life, and one can find Washington reference it almost fifty times," they confirmed.

It's no secret that Lin-Manuel Miranda is a huge fan of 1990s hip-hop.

The entire musical is full of countless references and tidbits from classic hip-hop songs.

There's another reference to Notorious B.I.G. in 'Cabinet Battle No. 2' when Thomas Jefferson uses a line from the song 'Juicy' when he says, 'And if you don't know, now you know, Mr. President.'

The cabinet debates in Hamilton were also largely structured in a similar fashion to the rap battles in Eminem's film, 8 Mile.

The speed of the songs in Hamilton is... insane.

In fact, FiveThirtyEight did the maths and calculated that Hamilton would actually be four to six hours long if it was sung at the pace of other popular Broadway shows, such as The Phantom of the Opera. 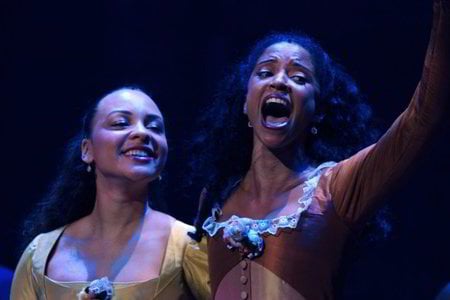 Peggy and Angelica in Hamilton. Image: Disney Plus.

George Washington's nod to the slaves.

Hamilton didn't address many of the more complex elements of the history surrounding the Founding Fathers, including the fact that many of them were slave owners.

Christopher Jackson, who played George Washington in the original cast, had to reconcile with his role of playing a slave owner as a Black man.

"It's something I spent a lot of time and a lot of angst trying to figure out how I reconcile being in this man's skin," Jackson told Vanity Fair.

"As a Black man, I just couldn't put it together." 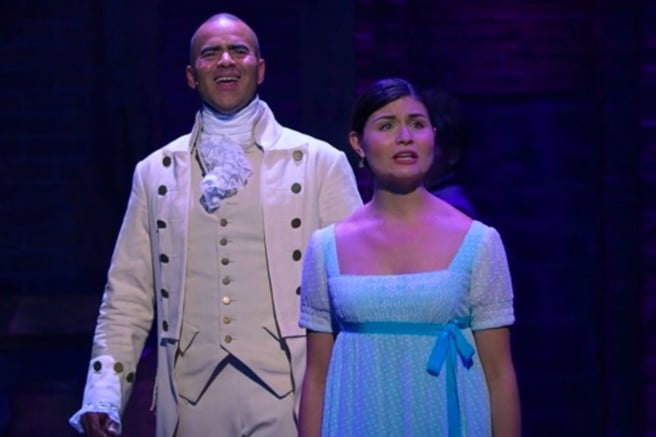 In the song 'Who Lives, Who Dies, Who Tells Your Story', Eliza reflects on the years she spent after Hamilton's death.

When she sings, 'I speak out against slavery', Washington (Jackson) is seen bowing his head and moving out of the spotlight.

In the final few minutes of the musical Eliza Hamilton née Schuyler describes how she outlived Hamilton for decades, dedicating her life to his causes and establishing orphanages.

When the chorus sings the final line of the musical, Eliza steps forward and gasps, before the lights come down.

Since Hamilton first debuted on Broadway in 2015, fans have questioned what Eliza's final gasp means.

The cast haven't exactly confirmed what the gasp at the end of the show means either. 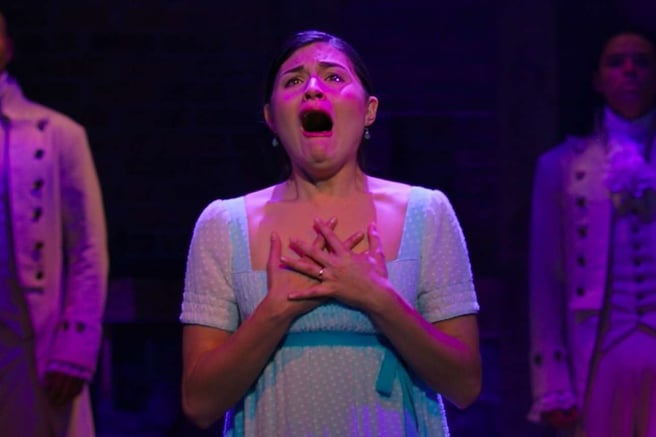 Phillipa Soo, the Tony-nominated actress who played Eliza in the original cast, had a similar opinion.

"To me, the moment always belongs to all of us in the entire room," she said. "It's a culmination of the entire experience we just had as the audience as the cast as the characters."