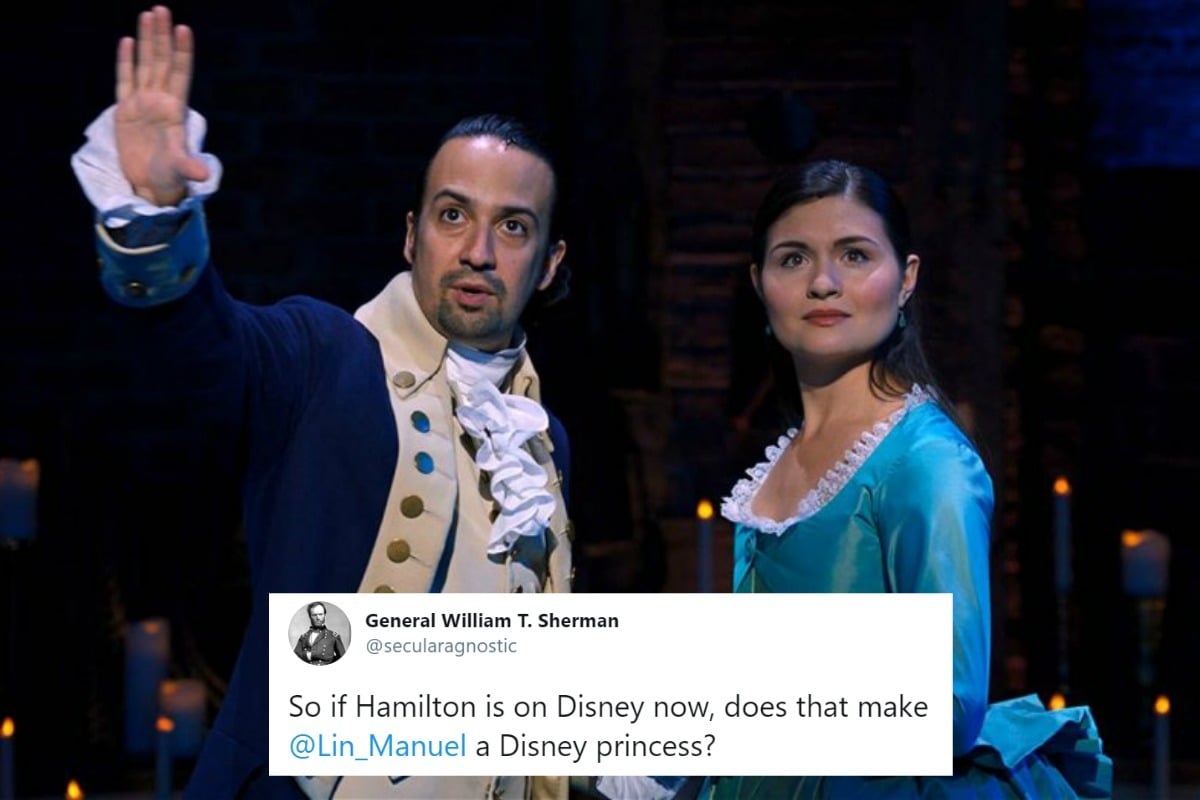 While some of us spent our weekends outdoors now that restrictions are easing, many of us chose to spend our time at home ﻿watching (and re-watching) the hit musical drama film, Hamilton.

The film, which is a live stage recording of the award-winning Broadway musical of the same name, dropped on Disney Plus last Friday, just in time for America's Fourth of July weekend.

And going by the reactions on Twitter, people bloody loved it.

Watch the official trailer for Hamilton on Disney+ below. Post continues after video.

If you haven't seen it yet, Hamilton follows the rise and fall of one of the Founding Fathers of America, Alexander Hamilton, and is inspired by his 2004 biography by Ron Chernow. The musical was filmed over two nights in 2016 with most of the original cast and was designed to make it feel as cinematic as possible (even down to the brief intermission break).

But Hamilton is far from your ordinary musical. In fact, the cult favourite is a mash-up of hip-hop, rap and musical theatre. And once you've seen it, you'll immediately want to listen to the soundtrack... on repeat.

Here are 21 of the best Twitter reactions to film.

#Hamilton was everything I knew it would be and more.

I shouldn’t be listening to Who Tells Your Story at 9am #Hamilton pic.twitter.com/NVM84KRP0Q

WHY am I just now discovering how AMAZING #Hamilton is??? What I wouldn’t give to see that live. 😫

Retail staff calling me “Sir” getting that #Hamilton flow stuck in my head again.

#Hamilton is as good as they say. Probs gonna watch 5 more times this week 🤷🏻‍♀️

So if Hamilton is on Disney now, does that make @Lin_Manuel a Disney princess?

*remembers the assignment due in half an hour*

They told me #Hamilton was amazing, groundbreaking, significant and sensational. They failed to tell me it would DESTROY ME. Is it normal to cry this much??? @Lin_Manuel (kudos but also how dare u)👏🏽👏🏽👏🏽 pic.twitter.com/RCszvZFNvj

Me rushing to the bathroom during that 1 minute intermission #Hamilton pic.twitter.com/qTe4k12pZh

Laurens and Hamilton looking at each other like THAT and saying they're best friends... #Hamilton pic.twitter.com/FhfxldexG6

It's been hours and I still can't get over how perfect #Hamilton is. pic.twitter.com/8qbxEyYmxw

Have I watched #Hamilton twice in the last 24 hours aka 6 hours of my life? Yes, yes I have 🙃 pic.twitter.com/Nx0kWNmgBT

Alexander when he’s chosen for the Constitutional Convention #Hamilton pic.twitter.com/WwyLBMtvVR

#Hamilton has broken me. pic.twitter.com/3x4gYdomuW

All I want to hear is satisfied on repeat. ON REPEAT. #hamilton

Have you watched Hamilton? Let us know what you thought in the comments below.

Hamilton is streaming now on Disney Plus.