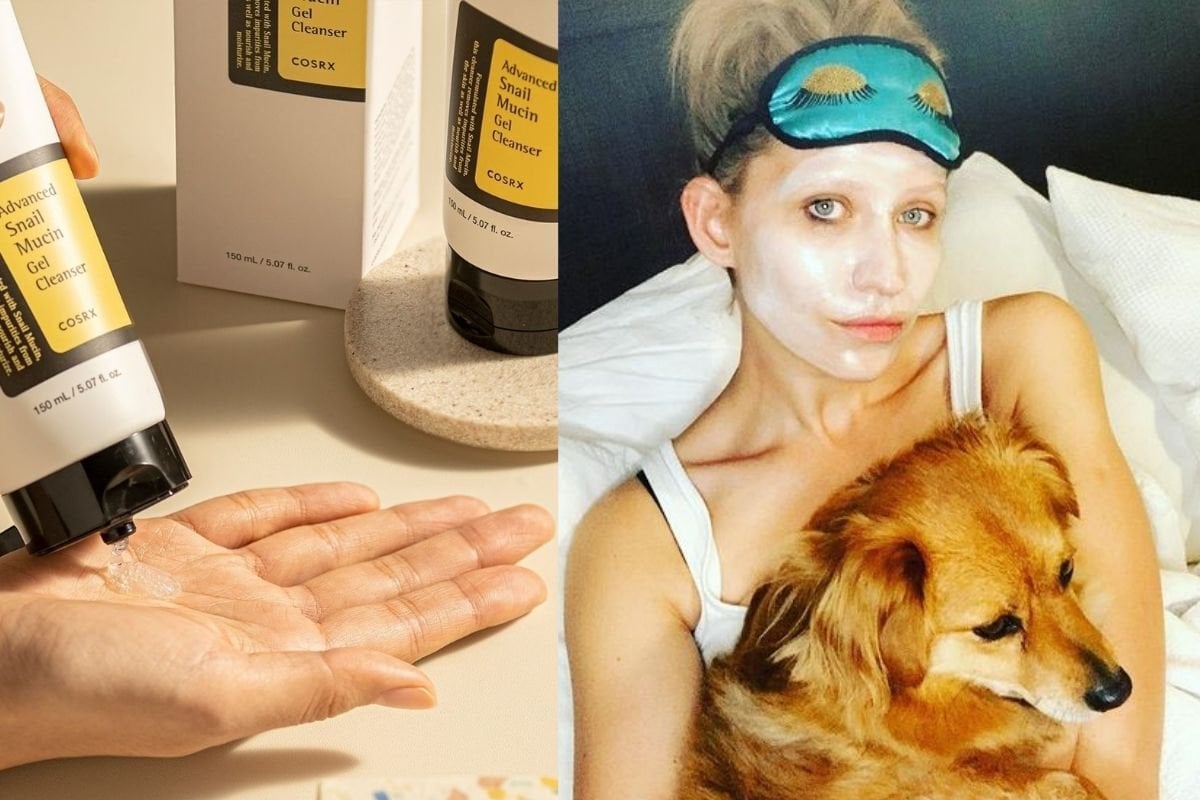 It’s no secret that skincare often contains some pretty gross ingredients, is it? Things like lanolin, crushed bug shells, fish scales, bee venom, placenta and my personal fave, snail slime, all spring immediately to mind… and then, there’s penis!

I’ll give you a moment to digest that.

Watch: More of a video kinda gal? That's cool. We understand. Here's some of the gross ingredients hidden in your cosmetics. Post continues below.

See, I have a sick fascination with some of the more revolting things that people will do in the pursuit of eternal youth. I’m not game to do them myself, of course.

But stuff like vampire facials, eel baths, fish pedicures and hair masks containing bull’s semen fascinate me! It’s like slowing down for a car crash I guess. I don’t want to see... but also, I can’t look away.

I will never forget the moment I read that people were popping foreskin into facials, and like, no one was talking about it?

I had so many questions. Whose foreskin was it? How did they get it? What did they do with it? I was chucking back a beer in the bath at the time, but I immediately fetched the rest of the six-pack from the fridge and proceeded to go down an epic internet hole of grossness.

I then compiled all of my rotten findings into this nasty lil' article for you because of course you want to know too.

So yeah, where were we?

So apparently the er, penis piece, is donated during routine circumcision. No babies are circumcised specifically for this purpose – it’s apparently common practice in South Korea still.

Once collected, it’s popped into a tissue culture and cloned, with one tiny sample going on to generate over a million treatments. The resulting serum (liquified penis, if you will) is rich in growth factors which are at their peak ability to promote cell turnover.

Listen: Just on the whole 'breaking down ingredients' thing, Leigh and Kelly explain the difference between two commonly-mistaken types of Vitamin A, retinol and retinoid on this episode of You Beauty. Post continues below.

I didn’t know how to feel about this. Part of me was flirting with the idea of getting one. I was curious, but then my ethical opposition to the non-medically necessary circumcision of infants... yeah nah. Also, the idea of smothering myself in a penis potion to achieve everlasting youth... it just sounded like something a witch would do tbh.

Anyway, as it turns out – Australia’s strict TGA regulations meant foreskin facials never made it to our shores, anyway.

Rumour has it the serum is pretty stinky though, so you’ll be relieved to know it’s also in the process of being phased out overseas...

I ordered a bottle and when it arrived; I was moments away from pumping it all over my face when I was struck down with a crippling feeling of guilt.

Omg. What if like 700 snails had been slaughtered for their loads?

I googled the delicious words 'harvesting snail slime' and was pleased to discover that far from cruel and sadistic extraction methods, snails kept for cosmetic harvesting live quite the pampered life.

They’re fed only organic materials and basically reside in a five star retreat, where they enjoy comfortable temperature controlled spas and special snail treadmills, where the surface is bumpy enough to get them so excited that they bust a nut which is collected in special trays underneath.

I’ve been doing this at least once a day for months now and my skin has never been better. Do not get it in your mouth though. Ew.

It takes a moment to wrap your head around the concept of using CRAP to get CLEAN. Take all the time you need.

But in Japan, powdered nightingale droppings are routinely added to cleansers, masks, soaps, facials and creams and like, everyone’s fine with it!

Excrement from a particular type of nightingale called the Japanese Bush Warbler (called uguisu in Japanese) is collected, sanitised with UV light and then milled into a fine and grainy powder. It’s apparently high in both proteolytic enzymes and guanine and together they work as a dirty little double act to exfoliate, brighten and illuminate skin.

Full disclosure: in the name of... science, I just went online to try to purchase it. It’s currently sold out and the reviews are extremely compelling. So I guess I’ll check back and keep you posted!

In the meantime I’m over here amusing myself with all the heavily alliterated ways you could market such a thing. Sh*t suds! Faeces foam! Crap cleanser! Scat scrub! Got any others? '@' me! Haha!

Fair dinkum, this one comes from 'straya, mate. The same websites where one can go to purchase refined holiday souvenirs such as bottle openers made from 'roo ball bags and southern cross emblazoned thongs, comes this: sheep placenta cream.

Also containing lanolin (which is pretty gross already) and vitamin e, it apparently supports the production of collagen and elastin whilst also being moisturising.

While this is a slightly less icky way to er, 'enjoy' placenta, there are still some theories that the use of it in skincare could be problematic since the placental extract contains estrogen.

So while I’m probably not going to put this on my face... I AM wondering what would happen if I started regularly rubbing it on my tits.

Cameron Diaz was wayyy ahead of her time in There’s Something About Mary. 'BSP' is a natural protein added to some hair products... and surprise!

It stands for Bovine Seminal Plasma! Everyone knows that protein can work wonders on your hair, but would you ever have imagined that the life giving fluid from a bulls ball sack was the gold standard?

During independent research, BSP used on coloured hair was shown to be notably stronger and experienced substantially less breakage than that which had been treated with egg or plant derived proteins.

As someone who has recently had a scalp bleach... I’m equal parts interested / disgusted.

When referred to by its unassuming alias 'ambergris' you wouldn’t think twice about its inclusion in high-end fragrance formulations. Ambergris... sounds quite nice doesn’t it? Elegant, fancy, French!

Well, sorry to rain on your parade but it’s actually a giant lump of pale grey, waxy, whale-yuck and according to Richard Sabin, a curator of marine animals at the Natural History Museum – far from being 'vomited' it actually gets lodged in its butt. Yep!

Scientists believe whales produce ambergris in their intestinal tract to help them break down tougher substances like shells and cuttlefish beaks. It then passes along with fecal matter before becoming lodged in the rectum.

The resulting blockade is extremely rare and expensive AF, with a few lucky ducks hitting the jackpot after stumbling across these nasty ass chunks washed up on the beach. Highly flammable, and with a musky odour with just a hint of poo, you can find it in several designer parfums.

However, the methods used to procure silk threads are cruel AF. Most silk comes from the Mulberry silkworm, which isn’t actually a worm at all – it’s a baby moth!

Think of it like the Hungry Caterpillar, except instead of pickles and sausages and lollipops this one just gobbles up Mulberry leaves.

It also spins silk threads into a little cocoon that it snuggles up inside of, ready for its transformation into a big, fluffy winged moth!

Except it never quite gets that far, because in order to unravel its cocoon into long, unbroken silk threads, producers need to first plunge it into boiling water to kill the pupa before it has a chance to break out, damaging the cocoon.

It takes approximately 2,500 boiled-alive-silkworms to produce just 500g of silk.

Whether or not silkworms feel pain in the same way that we do is unclear, so I guess it really comes down to where you set your ethical bar.

I personally couldn't get a sound night's sleep knowing hundreds of living things died so I could wake up with slightly smoother hair.

Tart with a heart over here, so I think I’ll stick to bamboo, thanks.

Have you tried any whacky skincare ingredients before? Let us know in the comment section below.