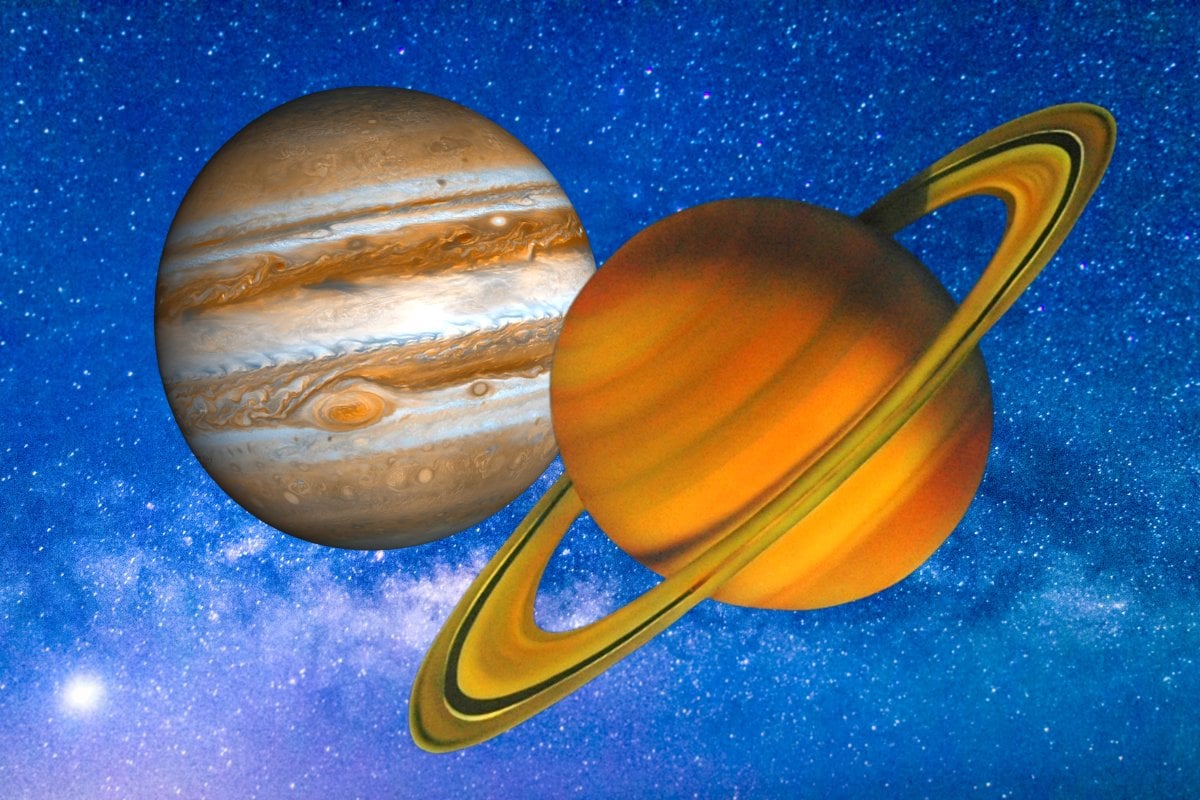 On December 21, 2020, Jupiter and Saturn will appear the closest to one another in hundreds of years and apparently, it'll give some people superpowers.

The planets will come together in a 'great conjunction' which happens approximately every 20 years. The last one happened in May 2000, but this year is... special, because it's the closest the planets have appeared together since 1623.

Watch: The star signs in a time of crisis. Like, maybe all of 2020. Post continues below video.

As NASA puts it: "On the 21st, they will appear so close that a pinkie finger at arm's length will easily cover both planets in the sky."

Sounds cool. But what does it... mean? That depends who you ask.

According to a range of people, Jupiter and Saturn passing this close together in the sky means the world is ending, minority groups are going to gain superpowers (we're into that) and Jesus Christ is coming down from heaven.

Okay, it should go without saying that these are... not verified facts.

Firstly, some bad news: Christian evangelist Pastor Paul Begley has predicted that the world will end on December 21.

He said the great conjunction coupled with a Mayan calendar tell him this is when Jesus Christ will return. It's also his birthday, so a huge day for Mr Begley.

He's also uploaded videos, almost daily, about the apocalypse, aliens and 'deep state'. Titles of videos include 'Cannibal sandwich & Antartica (sic) earthquakes' so, uh, take from this what you will.

In better news, another conspiracy surrounding this great conjunction is that it is the day Black people gain superpowers.

Me trying to walk in the office professionally, but I woke up with super human strength. #BlackTwitter #December21 pic.twitter.com/Qtmg249vOu

Waking up on the 21st with no powers: #December21 pic.twitter.com/SmGfauny0g

The conjunction is important to astrologers because they believe Jupiter and Saturn - outer plants - influence society as a whole rather than just individuals.

Astrologers seem to agree that the conjunction will bring about great change- in fact, they're calling it that biggest astrological event of our lifetime.

Astrologer Natasha Weber said the great conjunction will also occur in zero degrees of Aquarius. No idea what that means? Same.

Weber explained on Instagram writing: "It makes for a second brand new beginning, because Jupiter and Saturn only align in an air sign every 200 years.

She said Jupiter and Saturn's 'kiss' "is a trigger for significant political, cultural and social transformations".

"These changes will have distinct Aquarian undertones. For starters, the sign of the Water-Bearer is highly intellectual. And we can expect major advancements in the areas of science, medicine and technology."

Um, yes please. We could do with that right about now.

"Religion and personal freedoms will also be revamped," she said.  "Community, how we interact and our social conscience is about to radically change."

Okay, so astronomers are pretty excited about this mostly due to its rarity. Obviously, they don't believe any of the above (not even the superpowers thing).

'Great conjunctions' occur approximately every 20 years when Jupiter "overtakes" Saturn in its orbit.

The great conjunction of 2020 will be the closest since 1623 and the closest one since 1226 that will actually be observable from Earth.

If you're keen to see the conjunction, you'll be able to with the naked eye, as long as you have a good spot facing west.

So so so incredibly pleased with this! Hopefully tomorrow's conditions are more favourable for the Jupiter and Saturn #GreatConjunction!#stormhour #thephotohour pic.twitter.com/Z2X9BATELH

Astronomy.com said it's the best conjunction of our lives - just another once-in-a-lifetime event to enjoy in 2020.

Reply
Upvote
1 upvotes
I was looking forward to seeing this, and of course it's been raining all evening! 😆 Oh well, maybe next time.
random dude a month ago