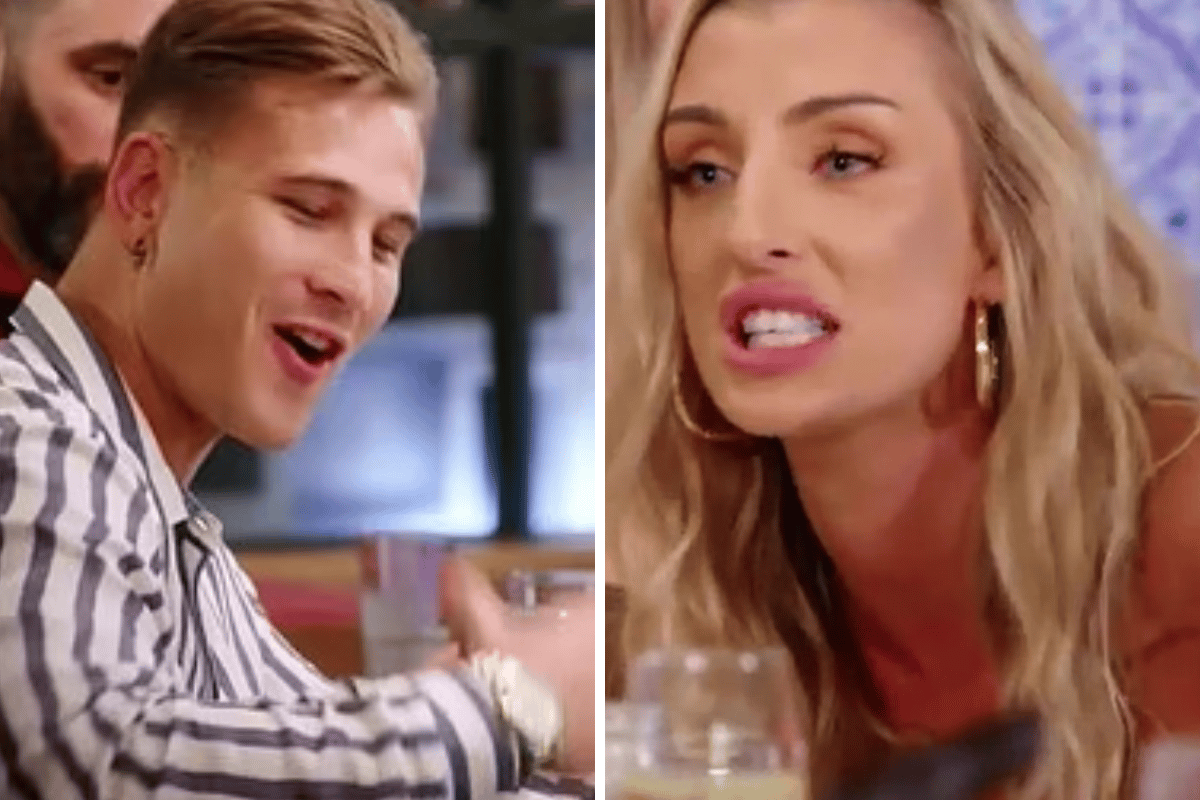 Married At First Sight has given us one scandal after another. Even with only a few more episodes to go, the drama is far from over.

Wednesday night's episode was no different to the rest of the season, with former brides and grooms coming back for one last girls' and boys' night.

Bride Selin was back and had many questions, which spurred a lot of... loud conversations.

After asking multiple times about the glass-smashing incident, and Olivia choosing to share Domenica's nude photo with the rest of the group, Tamara decided it was time to do a yell:

"We're getting sick of you lecturing us, you're being rude," she told the former contestant. "Like you've been here as long as we have and been through what… no you haven't. Sometimes people don't want to talk about what you want to talk about."

Selin wasn't happy with leaving things there, so she responded with: "You know what? You just want to keep yelling like you do to Brent."

Surprisingly, drama also unfolded at boys' night after Daniel entered and subsequently shared how he felt about cheating with fellow bride Carolina.

Mitch labelled Daniel and Carolina's relationship a "short-term fling," saying: "She'll just have a bit of fun and she'll move on I reckon."

"Don't say disrespectful s**t like that," Daniel replied. "Why would you talk about my girl like that?"

After some additional comments from Mitch, Daniel walked out of the experiment for the final time.

Here's everything that's happened since.

Mitch defended his behaviour from the boys' night, telling 9Entertainment he had no guilt about what he said to Daniel.

"I think when he apologised and then said if he had his opportunity a hundred times again, he wouldn't change anything that he did. That was the tipping point for me," Mitch explained. "Dion is a gentleman. He's got feelings. He's got a heart. He's a human being."

During Wednesday night's episode, Mitch made it clear that Daniel and Carolina choosing to cheat is "not acceptable".

"He could've just continued that relationship on the outside. That's my perspective on what he should've done," he said.

"Sliding into someone's DMs on Instagram, while she's married, I just think that's not on. It's not acceptable."

"I didn't see it coming. But I guess he had a few drinks and forgot to keep up his persona."

As for an apology? Daniel was happy to give one, but swiftly followed it up with an insult.

"I can't say that enough. But come on like how many Oscar awards do you want for these big elaborate speeches?"

While on Today, Al defended Mitch for his words on Wednesday night.

"I thought it would be super fun," Al said. "Then Daniel walked in and the energy just dropped. Everyone was like, 'So are we going to talk about the cheating scandal... or?'"

"When Daniel came in I expected him to be remorseful and say, 'Sorry Dion, I'm Mr Steal Your Girl and I stole your girl', but he didn't," Al continued.

"He said he'd do it a hundred times over and things like that. That's when Mitch humbled this guy."

The groom has no nice words to say about his fellow contestant, Daniel, telling 9Entertainment: "Obviously things had to be said between Daniel and I.

"I basically told him how I felt and that I don't agree with the way he handled it. I don't think it was an honourable way of doing it, and I found it quite childish and immature."

"Daniel's sort of response was, 'Oh look I apologise, but I'd do it a thousand times over'," he recalled.

"It wasn't very sincere. It wasn't humble. It wasn't anything. It was just 'I don't care' sort of thing."

Listen to Cancelled's episode on Married At First Sight, hosted by Clare and Jessie Stephens. Post continues after podcast.

Before Wednesday night's episode, Tamara made it clear she had no regrets for any of her behaviour. She went on to say her husband Brent "wants to be an influencer".

“This is his big break,” Tamara told radio show Jimmy & Nath. "Everything that he wants to do with his influencer life, but good on him, whatever. He just wants to be an influencer, you know, get some free teeth."

When Tamara was asked by the hosts if she regrets doing the show, she responded: "In short yeah, probably."

"I don’t regret the whole thing, I guess it’s just like, in its entirety I think there was a lot of drama that wasn’t obviously related around our relationships. That overshadowed a lot, and it’s taken up a lot of air time - so it sort of makes a lot of the stories, to me anyway, not make a lot of sense."

Selin had a few choice words after watching the episode back for herself, explaining that she and other former contestants "wanted to know" what had unfolded.

"Coming into the girls' night for everyone who wasn't there till the end, we wanted to know what happened since we've been gone. And I thought that was a valid question," she told 9Entertainment.

"The moment we did ask, it was backs turned, eyes roll, and it was kind of like, 'Selin, you're poking the bear… Stop asking, we had such a bad time'.

"It wasn't received well… because of the way they did carry on at the [couples] retreat and Tamara's relationship with Brent," she said.

She went on to say: "I made a comment because Ella did fill me in, in the end and I said, 'Look, all I want to know is what happened'.

"I don't regret the conversation."

On Today, she admitted she'd heard "rumours" about the events that had unfolded.

"I actually heard rumours of the girls ganging up on Domenica which didn't really sit with me well," Selin said.

"I wanted to go in and address that issue front on, and I really didn't get any answers. The girls didn't want to talk about it."

She defended her decision her behaviour, telling the Today hosts she wasn't there for the "bullying".